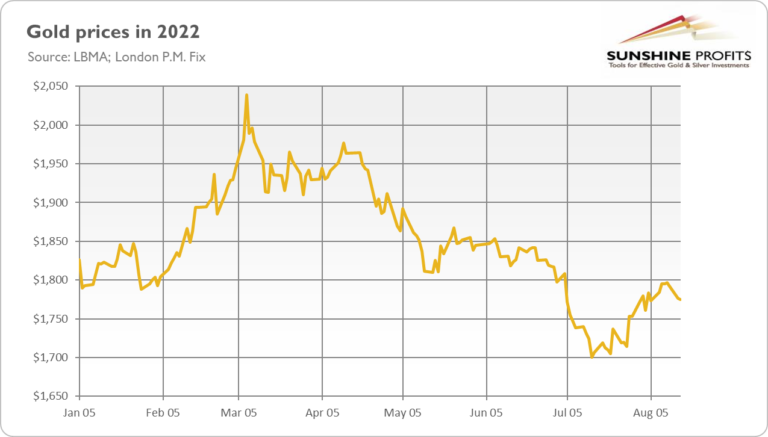 Although gold barely reacted to the July FOMC minutes, the Fed worries about an economic slowdown. That bodes well for the long-term outlook for gold.

Yesterday (August 17, 2022), the FOMC published the minutes from its last meeting from the end of July. They don’t reveal many surprises for the markets. However, the publication shows a few interesting things. First, Fed officials continue to worry about inflation, believing it will remain elevated for some time:

Participants agreed that there was little evidence to date that inflation pressures were subsiding. They judged that inflation would respond to monetary policy tightening and the associated moderation in economic activity with a delay and would likely stay uncomfortably high for some time (…).

Uncertainty about the medium-term course of inflation remained high, and the balance of inflation risks remained skewed to the upside, with several participants highlighting the possibility of further supply shocks arising from commodity markets.

Second, because of this grim inflation outlook, the US central bank is going to continue its tightening cycle and further hike the federal funds rate.

What’s more, the FOMC members agreed that moving to a restrictive stance would also be wise from a risk-management point of view:

In light of elevated inflation and the upside risks to the outlook for inflation, participants remarked that moving to a restrictive stance of the policy rate in the near term would also be appropriate from a risk-management perspective because it would better position the Committee to raise the policy rate further, to appropriately restrictive levels, if inflation were to run higher than expected.

The fact that the Committee’s participants remain hawkish and firm in the fight against inflation is negative for gold prices.

The Fed Expects an Economic Slowdown and a Rise in Unemployment

However, and this will be the third interesting issue revealed by the minutes, the FOMC participants are fully aware that the US economy is decelerating and that monetary policy tightening is one of the reasons behind the slowdown.

With regard to current economic activity, participants noted that consumer expenditures, housing activity, business investment, and manufacturing production had all decelerated from the robust rates of growth seen in 2021 (…). Participants observed that indicators of spending and production suggested that the second quarter of this year had seen a broad-based softening in economic activity. Many participants remarked that some of the slowing, particularly in the housing sector, reflected the emerging response of aggregate demand to the tightening of financial conditions associated with the ongoing firming of monetary policy. Participants anticipated that U.S. real GDP would expand in the second half of the year, but many expected that growth in economic activity would be at a below-trend pace, as the period ahead would likely see the response of aggregate demand to tighter financial conditions become stronger and more broad-based.

Fourth, although the labor market remains strong, the Committee’s members worry that it might not be as tight as it’s widely believed:

Several participants also observed, however, that the labor market might not be as tight as some indicators suggested, and they noted that data provided by the payroll processor ADP and employment as reported in the household survey both seemed to imply a softer labor market than that suggested by the still-robust growth in payroll employment as reported in the establishment survey.

Additionally, the FOMC participants admitted that some labor markets were deteriorating:

Many participants also noted, however, that there were some tentative signs of a softening outlook for the labor market: These signs included increases in weekly initial unemployment insurance claims, reductions in quit rates and vacancies, slower growth in payrolls than earlier in the year, and reports of cutbacks in hiring in some sectors. In addition, although nominal wage growth remained strong according to a wide range of measures, there were some signs of a leveling off or edging down. In some districts, contacts suggested that labor demand–supply imbalances might be diminishing, with firms being more successful in hiring and retaining workers and under less pressure to raise wages.

Moreover, the Fed’s staff projects that the unemployment rate will start rising in the second half of 2022 and will reach an estimate of its natural rate at the end of next year. Oops… Please remember that the official view was that there was no recession because the unemployment rate remained low. However, now the Fed’s staff itself forecasts rising unemployment. Does it mean that a recession is coming or that it has already begun?

Fifth, the US central bank is fully aware that the worst is yet to come. I have here in mind that the tightening of monetary policy hasn’t yet been transmitted fully into the real economy. So, you can expect a further slowdown:

Participants pointed to some evidence suggesting that policy actions and communications about the future path of the federal funds rate were starting to affect the economy, most visibly in interest-sensitive sectors. Participants generally judged that the bulk of the effects on real activity had yet to be felt because of lags associated with the transmission of monetary policy (…).

Hence (and sixth), the pace of monetary tightening will slow down after some time and the Fed will pause with interest rate hikes at some point:

Participants judged that, as the stance of monetary policy tightened further, it would likely become appropriate at some point to slow the pace of policy rate increases while assessing the effects of cumulative policy adjustments on economic activity and inflation. Some participants indicated that, once the policy rate had reached a sufficiently restrictive level, it would likely be appropriate to maintain that level for some time to ensure that inflation was firmly on a path back to 2 percent.

The Fed’s pause, not to mention the reversal of its hawkish policy, would be positive for gold prices.

What do the recent FOMC minutes imply for the gold market? Well, the price of the yellow metal barely moved yesterday and stayed in a slightly downward trend. However, from the medium-term perspective, gold remains in a sideways drift. As the chart below shows, gold has been trading in a corridor of $1,700-$1,800 since early July. 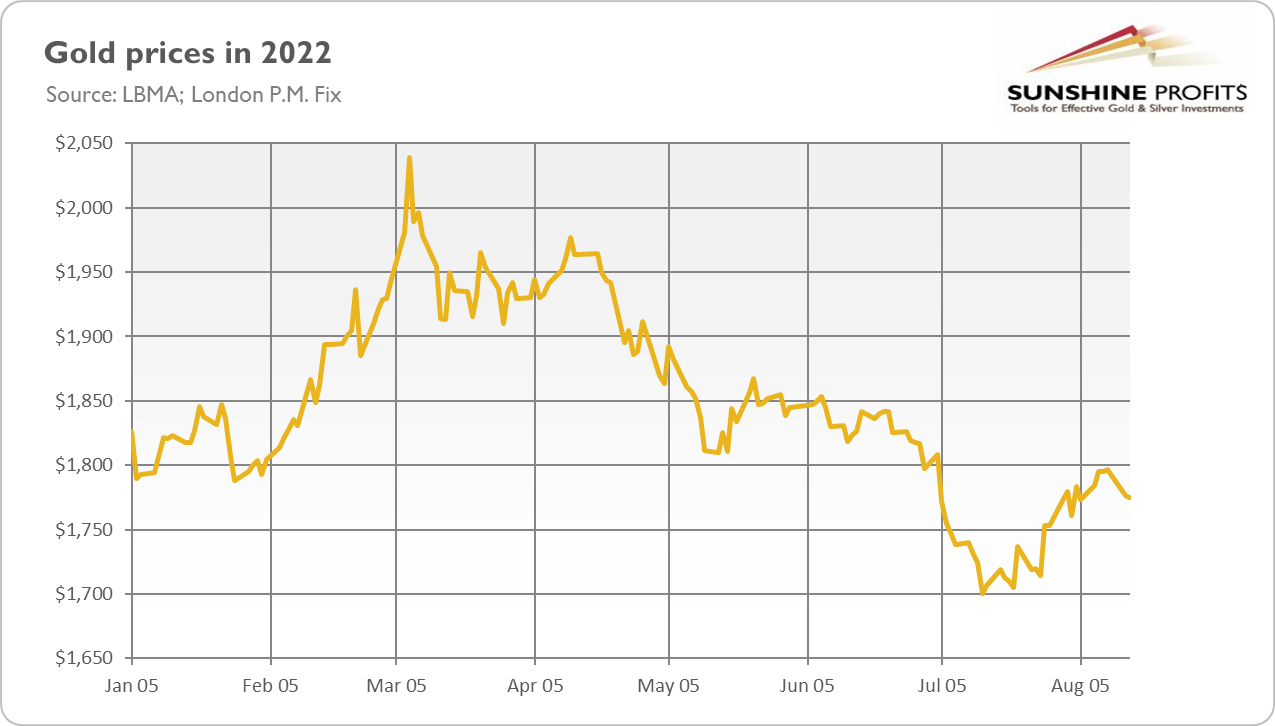 In other words, given the deteriorating economic outlook, the FOMC members started to worry about possible overtightening – many of the committee’s participants noted a risk that the Fed “could tighten the stance of policy by more than necessary to restore price stability”. This is why, at some point, the US central bank will pause on interest rate hikes, but it won’t stop the stagflationary train.

It seems that the nasty combination of elevated inflation, stagnant growth, and rising unemployment is coming fast. It will crush everything in its path – except gold, which should shine in these unusual economic conditions.