Dan Loeb’s Third Point Partners has increased its pressure on Nestle, calling for more aggressive divestitures, a corporate reorganization, and improved transparency on strategy at the Swiss foods giant. In a 34-page presentation, the activist investor urged Nestle to be “bolder in re-shaping [sic] the portfolio” of its many businesses, referencing global M&A opportunities.

The move came a little more than one year after Third Point disclosed a $3 billion stake in Nestle, noting how rare it is "to find a business of Nestle's quality with so many avenues for improvement." However, the company has since disappointed - weak growth leading to a nearly 8% decline in the stock price since Third Point first disclosed its holding.

Dan Loeb criticized the company's board on Monday for not having directors with outside experience in the food and beverage sector. The activist also reiterated its demand to sell the L'Oreal stake, which is worth approximately $27 billion. The proceeds should be used for acquisitions in core areas or "expedited share buybacks," Third Point said.

Shares in MiMedx traded down more than 32% Monday after the embattled pharmaceutical company announced the resignations of its chief executive and chief operating officers. CEO and Chairman Parker Petit quit will remain a director, while President and COO Bill Taylor left the company completely, MiMedx said.

“Now that Parker is gone, the Massive Fraud will be uncovered...” Cohodes tweeted Monday. The CEO departure was a personal triumph for Cohodes, who urged MiMedx to oust Parker in October.  “Bankruptcy will come quickly for $MDXG now,” the short seller continued. “I have been to plenty of these movies.” 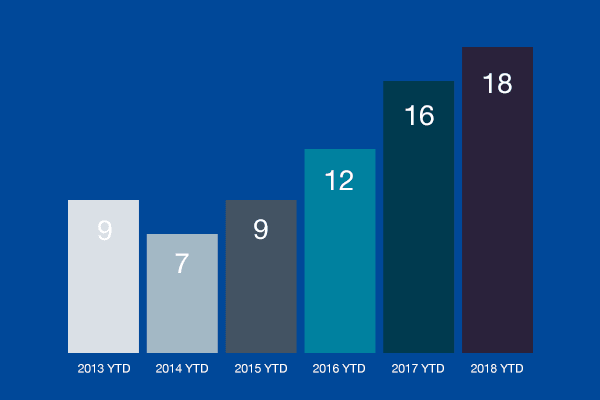 If you require your own statistics on shareholder activism, contact our team at [email protected] or subscribers of Activist Insight Online can visit our interactive statistics page.