One way to play Tesla (NASDAQ:TSLA) this year, especially if you believe TSLA stock is going to rise from here, is to buy its LEAPS (long-term equity anticipation securities). These are just long-dated options that are deep-in-the-money.

For example, if you think TSLA is going to rise 50% to roughly $1,212 per share, then it’s possible that those LEAPS will rise 73%. In effect, you get more leverage, both on the upside and downside.

But first let me show you the basic reason why I think TSLA could rise to more than $1,200 per share, from its price at this writing of $816.12 per share.

How To Value Tesla Stock

Usually, Tesla gives an annual delivery or sales forecast for the year. Last year Tesla said it planned on hitting 500,000 in deliveries. For example, this is the goal stated on page 10 (Outlook section) of its Q3 slide presentation.

In Q4 and all of 2020, Tesla met that goal. However, in its Q4 presentation, the EV maker did not give a concrete 2021 goal. Instead, on page 11 of its slide deck, Tesla said it intends over a multi-year horizon to “achieve 50% average annual growth in vehicle deliveries.”

That is less specific but also a very high goal. For our purposes, let’s simplify things. Let assume that is the goal for the next 10 years, and also assume that it expects to achieve 50% growth annually in sales.

Actually, to account for lower average car prices, let’s lower this by five percentage points to 45% average annual growth. This means that this year’s sales of $10.74 billion at Tesla will turn into $441 billion by 2030.

However, we need to make two adjustments to these numbers. First, the actual number of shares used to calculate earnings per share is 17% higher, due to in-the-money options, restricted stock units, etc.

That is what page 31 of the earnings slide covers. Therefore, its fully diluted market cap is $917 billion. This raises the price-to-sales multiple to 2.1x.

You can see these calculations for Tesla’s market cap in the table above.

In addition, we need to reduce in 2030 by a discount factor, in order to take into account risks and the alternative use of the money until then.

That reduces its revenue to $170 billion and raises the fully diluted price-to-sales multiple to 5.39x.

Now, in the following table, you can see that the adjusted price-to-sales multiple is 5.4x. That is still very cheap.

A more appropriate value would be 8X-10X sales. After all, the company is easily able to keep on producing electric vehicles over the next 1o years by then. 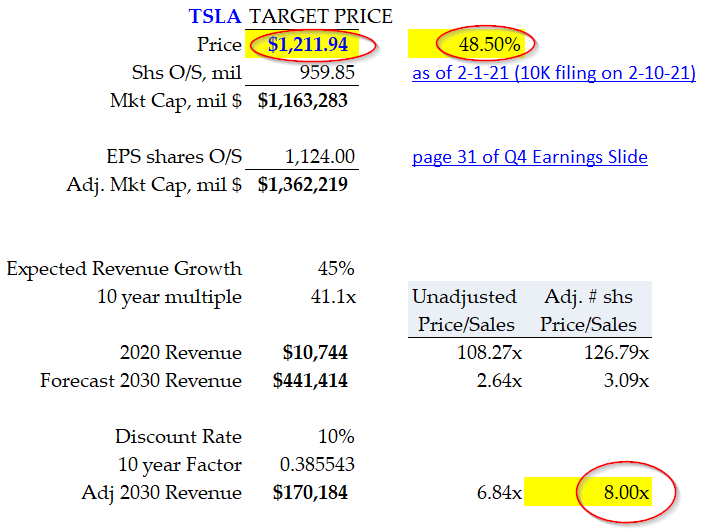 Keep in mind that this is a very simple model. It does not take into many otherwise deciding factors, including free cash flow, deliveries, and margins.

But the point is to see what the order of magnitude of the stock gain should be over the next several years if Tesla meets this 50% goal.

A cheaper way to gain exposure to Tesla is to buy future-dated (over a year from now) options that have deep-in-the-money exercise prices. These are known as LEAPS.

Obviously, there is significantly more downside risk if TSLA falls to $700 and stays there. The LEAPS would be worthless. But in both cases, you would lose roughly the same amount of money (slightly more with the LEAPS). This is clearly an investment if you believe in the upside potential of TSLA stock over the next year and a half.

On the date of publication, Mark R. Hake holds a long position in TSLA stock.

Mark Hake writes about personal finance on Medium and runs the Total Yield Value Guide which you can review here.