Warren Buffett And The Myth Of The 'Good Billionaire'

1) Following up on the ProPublica report I addressed in Wednesday's e-mail (The Secret IRS Files: Trove of Never-Before-Seen Records Reveal How the Wealthiest Avoid Income Tax), the legitimate questions it raises about the fairness of our tax system are totally undermined by massively stupid, grossly unfair hatchet jobs like this one from yesterday's New York Times: Warren Buffett and the Myth of the 'Good Billionaire'. Excerpt:

Warren Buffett appears to be the safest kind of billionaire: the good kind. Mr. Buffett is neither Zuckerbergian messiah nor Musky provocateur, neither Bezosist space cadet nor Sacklerian undertaker. He is, or seems to be, quiet, humble, indifferent to money, philanthropic, and critical of the system that allowed him to rise. Years ago, a proposed tax increase was named after him.

It's easy for people to think: If only members of the Sackler family were more like Mr. Buffett, imagine how many lives would have been saved. If only the billionaires who haven't signed the Giving Pledge would give away as much as Mr. Buffett has pledged to, imagine the impact on the world. If only more billionaires would make use of the system without feeling the need to pervert it, so many of our troubles would vanish.

2) Here's yet another reason to like Amazon's stock: Amazon Advertising Rates Soar in Pandemic-Fueled Surge. This is an increasingly important source of the company's profits... Excerpt:

Amazon's advertising rates jumped more than 50% in May from a year earlier, signaling the online retailer's rising profitability should continue through busy periods like its upcoming summer sale Prime Day and the holiday shopping season.

The rise in ad rates, reported by industry researcher Marketplace Pulse, may give lawmakers and regulators momentum in their effort to require Amazon to pay higher taxes and push merchants on the e-commerce platform to raise prices at a time they are grappling with higher shipping costs and other inflationary pressures.

The pandemic-fueled surge in online shopping has triggered greater advertising competition on Amazon, where global shoppers will spend an estimated $578 billion this year, according to EMarketer. Big brands like Procter & Gamble (PG) and Clorox (CLX) are bringing billion-dollar advertising budgets to Amazon to maintain their dominance as sales shift from stores to websites. They're duking it out with small brands that have trouble breaking into physical stores with limited shelf space but have a fighting chance online if they pay to be seen on Amazon.

P.S. I'm not worried about the possibility of the government forcing Amazon to break up because I think the stock would likely go up.

3) This is an interesting chart from Visual Capitalist: 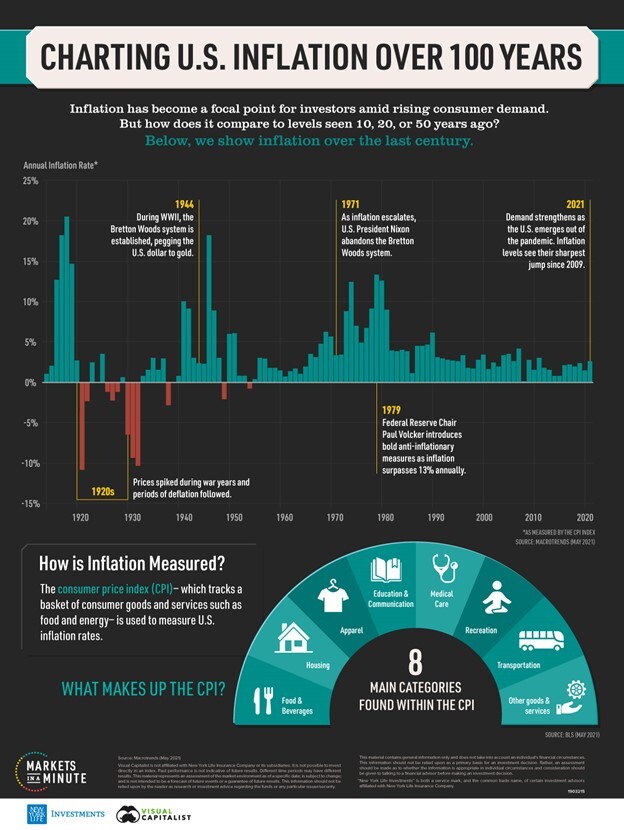 Hedge-Fund Manager Who 'Came Undone' Is Headed to Prison

4) Here's yet another example of someone who blew himself up (and is actually going to prison) for a moment of madness: Hedge-Fund Manager Who 'Came Undone' Is Headed to Prison. Excerpt:

He feared Jefferies could scuttle a deal he had been pursuing for more than two years, just days before completion.

"There was a fuse exploding," Mr. Kamensky says. "I lost it."

At 3:20 that summer Friday afternoon, he texted Joe Femenia, his contact at Jefferies, "DO NOT SEND IN A BID." In a phone call 20 minutes later with Mr. Femenia and Eric Geller, a Jefferies colleague, he yelled and cursed at the men, according to a Justice Department probe.

Mr. Geller not long after told a lawyer for the Neiman creditors committee that Jefferies wouldn't bid because Mr. Kamensky told the firm to back off.

Mr. Kamensky realized he had violated the law. As a member of the creditors committee, he shouldn't try to stop a higher bid that could benefit other investors.

Four hours after he made his threat, Mr. Kamensky called Mr. Femenia again. On the call, he pleaded with Mr. Femenia to tell a different story to authorities – that Mr. Kamensky wanted Jefferies to bid only if it was serious about going through with the deal. "I pray you tell them that this was a huge misunderstanding," Mr. Kamensky said on the call, which was recorded by Mr. Femenia. He said he could go to jail without Mr. Femenia's help.