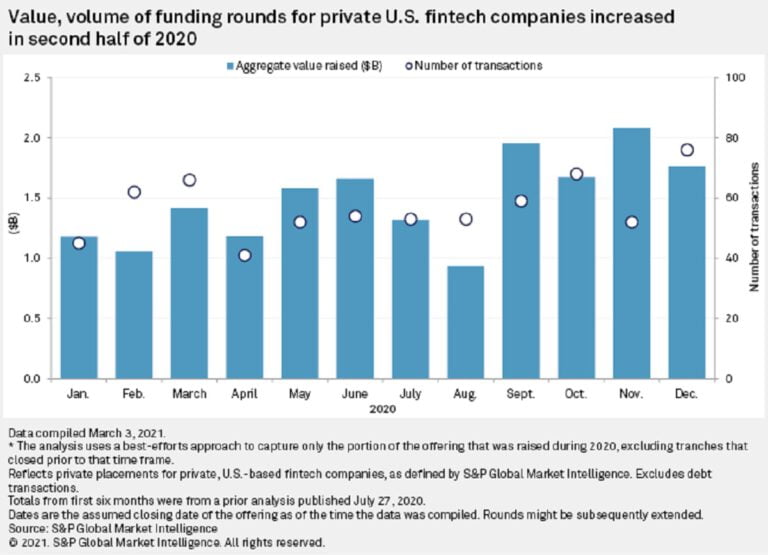 As predicted, U.S. fintech funding in 2020 outpaced 2019 in both amount raised and volume of transactions, despite — and in some ways due to — the COVID-19 pandemic. S&P Global Market Intelligence foresees another strong year in 2021, which has already burst out of the gates due to Robinhood Markets Inc.’s $3.4 billion raise amid the GameStop Corp. frenzy.

Though the virus wreaked economic havoc in 2020, interest rates remained relatively low, consumers embraced digital channels and the routes for venture capital firms to exit their investments, be it public offerings or M&A, remained open. Each of these factors likely contributed to the $17.8 billion that investors poured into private U.S. fintech companies in 2020, via 681 transactions, up from $14.8 billion and 539 transactions in 2019.

While the fundraising situation appeared somewhat precarious in April 2020, with the volume of transactions falling about 38%, activity rebounded in subsequent months. 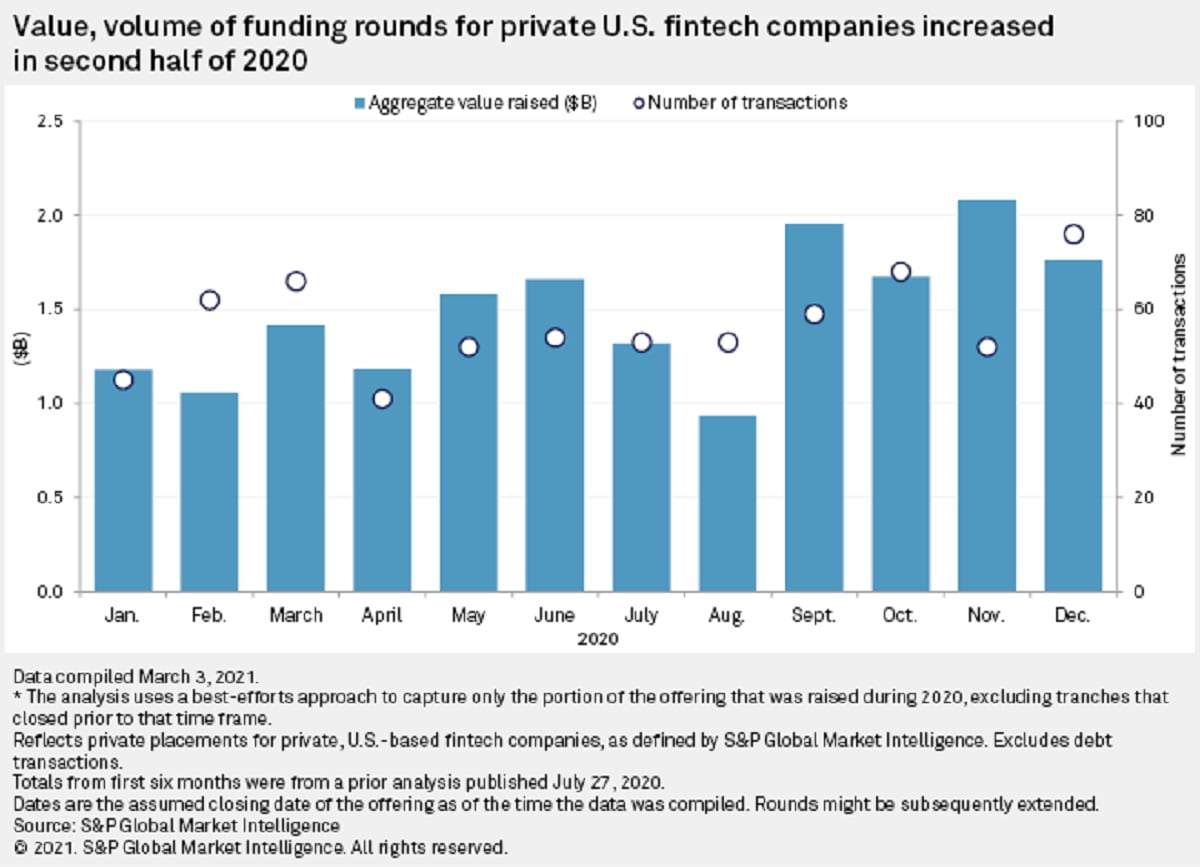 As in the public markets, investors likely sensed that the pandemic could end up benefiting fintech companies, as consumers suddenly needed to do financial transactions online. Additionally, private market investors tend to have longer time horizons, so a five-year investment might not be too daunting a prospect if one assumes the negative effects of the pandemic will have subsided by then.

By fintech sector, investment and capital markets companies garnered the most funding in 2020, with Robinhood contributing about 27% of the total. Insurtech companies and payments companies were also popular targets for VCs, with each sector raising upwards of $4 billion. 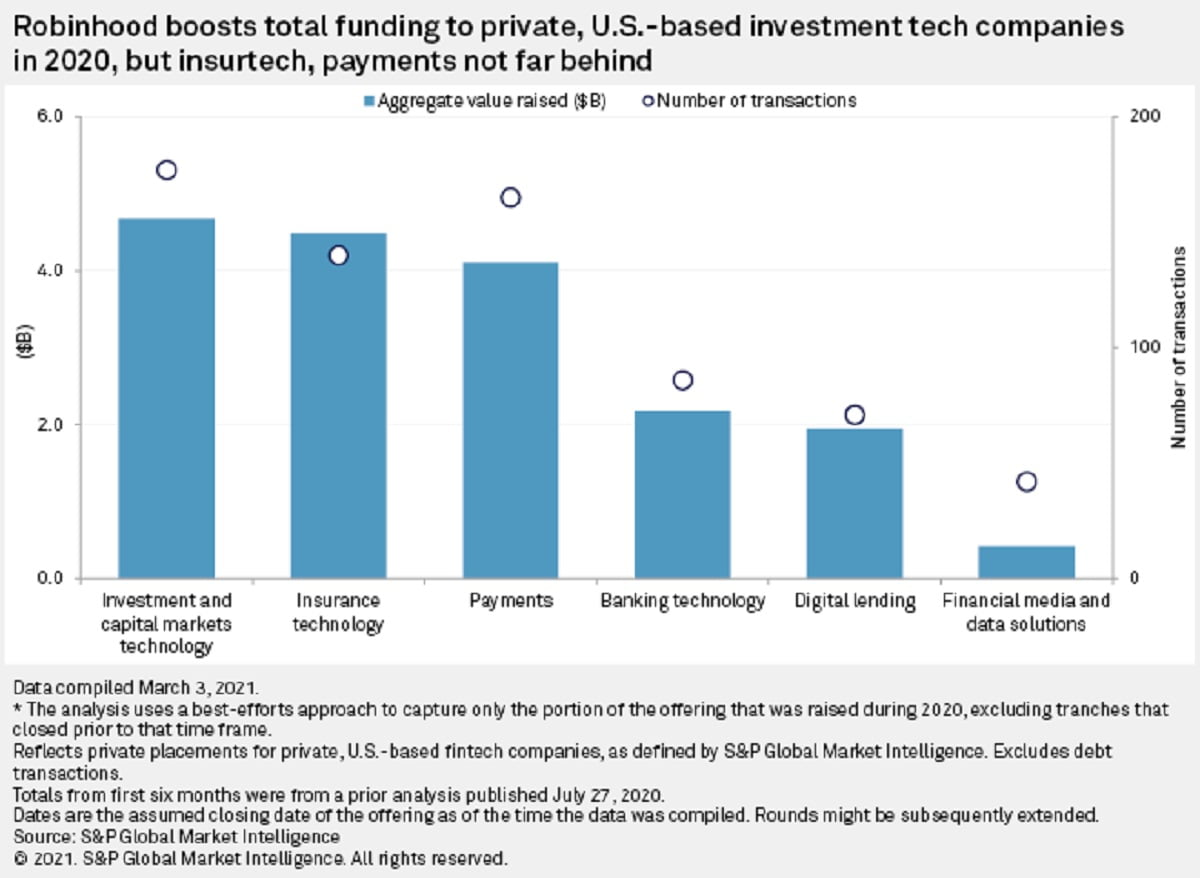 Looking ahead, Robinhood's $3.4 billion raise in January all but ensured that the first-quarter 2021 total for all U.S. fintech companies, in dollar terms, will top the same quarter of 2020, when companies collectively raised about $3.6 billion. While Robinhood was an extreme outlier, there have been some other fairly large raises in the first two months of 2021, relative to the same period of the prior year. Stripe Inc., the developer-focused payments processor, said March 14 that it raised $600 million; MX Technologies Inc., which offers a suite of application programming interfaces for banking services, announced a $300 million series C raise in January 2021; and Blend Labs Inc., which focuses on mortgage and consumer lending software, reportedly raised a $300 million series G round, per a Jan. 13 finLedger article. 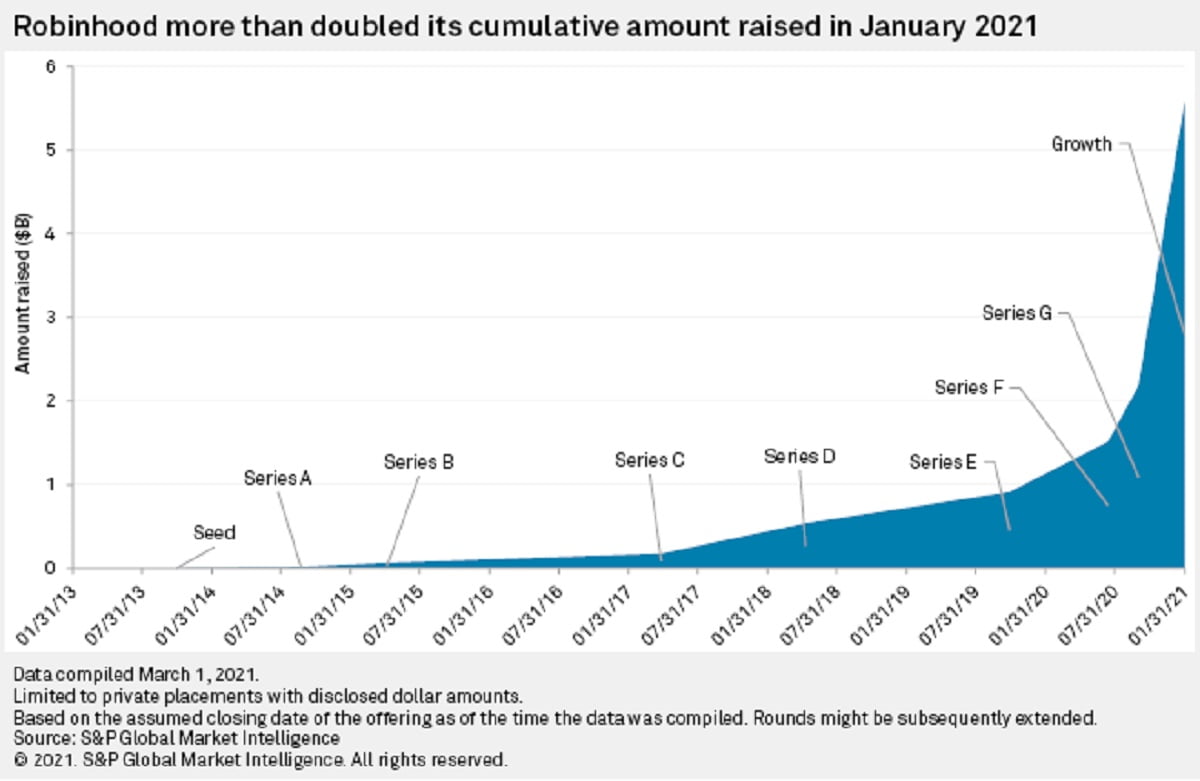 The Factors That Fueled Fintech Funding

The same factors that we think fueled fintech funding in 2020 are likely to remain in place in 2021, particularly low interest rates and the receptive market for IPOs and other going-public transactions like special purpose acquisition company (SPAC) mergers. Strategic acquirers of fintech startups have also continued to show deal appetite in the early months of 2021.

But the open IPO window is a double-edged sword. While it should lure more investors to invest in private fintech startups, it will also mean that a number of the largest currently private fintech companies are no longer included in our analyses. Robinhood, for instance, is planning to move ahead with an IPO in 2021, Bloomberg reported Feb. 26, and could file sometime in March, according to the publication. If it does, we will not include any offerings after the point when it goes public.

In the insurtech realm, Hippo Enterprises Inc. announced a SPAC deal March 4 that will take the homeowners insurance carrier public. Hippo has been on our radar for some time due to its rapid growth and, given its trajectory and the successful IPO of fellow homeowners-insurance-focused Lemonade Inc., going public seems like a natural evolution for the company. Hippo raised a bundle of VC money prior to the SPAC deal, including a $350 million round in November 2020, which made the list of the top 10 raises by private U.S. fintech companies for the year. Digital lender Affirm Holdings Inc., which also made the top 10 list, completed an IPO in January 2021.

Similarly, Social Finance Inc. and Oscar Health Inc. were among the most well-capitalized private fintech companies prior to going public. SoFi announced a SPAC deal in January to take itself public and Oscar completed a traditional IPO a few months later, with shares beginning to trade March 3. SoFi began as a digital lender but has since embraced a one-stop-shop model to offer an array of financial services, whereas Oscar is a full-stack insurtech company focused on the health insurance market.

That said, many seasoned raisers are still private, including Stripe, which has grown to become the most highly valued private U.S. fintech startup in recent memory.

Due to Robinhood, the dollar amount of funding for private, U.S. fintech companies appears to be firmly on track in the first quarter of 2021 and the full-year total could eclipse 2020's level, though it seems premature to make the latter prediction. Still, the ample supply of VC capital, both public and private, is one of the key assumptions underlying our overall positive sentiment on the sector in the months ahead.