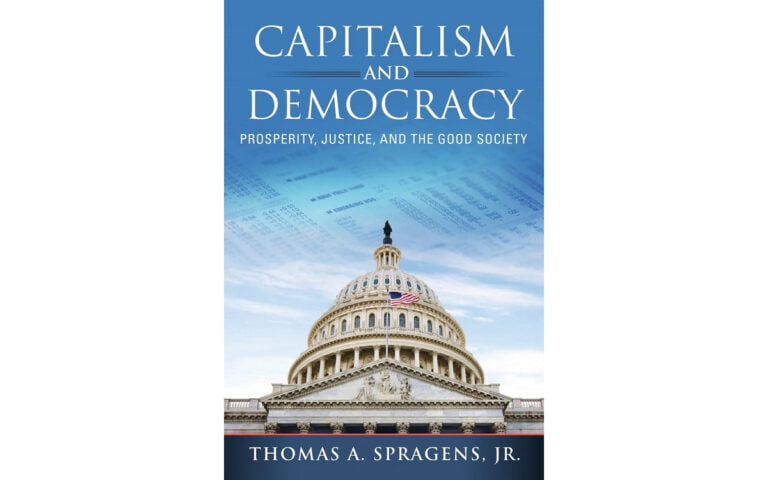 An excerpt from Capitalism and Democracy: Prosperity, Justice, and the Good Society by Thomas A. Spragens, Jr.

The ideological battles between advocates of free markets and minimal government on the one hand and partisans of greater democratic equality and some form of the welfare state on the other, rather than withering away as relics from a bygone era, have in recent years returned in full force. Anyone who wants to make sense of contemporary American politics and policy debates, therefore, needs to have some understanding of the divergent beliefs and goals that animate the combatants in this partisan warfare.

The central purpose of this book is to serve as a guide to those intrigued but also somewhat perplexed by the political sound and fury that confronts us at every turn these days, following us into our homes in the newspapers we read, the constant debates on television news, and the inescapable exhortations of political advertising. My principal purpose here is explanatory—to identify the major issues and to clarify the most important arguments of the opposing sides of the free-market-versus-welfare-state debate. Having done that, however, I will also offer toward the end some observations and judgments about these controversies. I do not pretend to have any definitive answers to the issues at hand, something I believe impossible for reasons to be discussed later. But I also believe that it is possible to narrow the geography of debate to a place where reasonable people may differ. And I hope here to make a contribution to that important task.

In the service of these goals, the topics and roles of the chapters are as follows. Upon examination, the sharp disagreement encountered these days between advocates of laissez-faire and champions of a more expansive welfare state turns out to be not one disagreement but three. One dispute is about political economy: Do unchecked markets maximize prosperity? Or do they often produce wasteful and economically damaging outcomes that require some form of government intervention? A second dispute takes place on the terrain of moral philosophy: Are the distributions of economic resources produced by the capitalist marketplace morally justified or at least morally acceptable? Or do they instead violate important standards of justice and fairness? The third and broadest dispute is about political philosophy: Is a society of free markets and minimal government the best kind of society possible? Or would that kind of society violate important democratic ideals and not really be all that good a place to live? The next three chapters examine the central issues and competing arguments in these three areas. 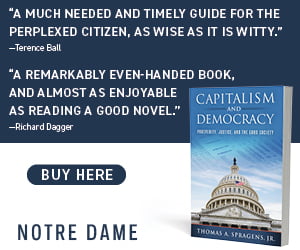 The Relationship Between Capitalism And Democracy

In the final two chapters I will try to step back from the arguments canvassed in the previous three chapters and offer my assessment of these controversies. In chapter 4 I want to explain why there can be no final and definitive judgments about whose argument is right regarding any of the three central issues: prosperity, justice, and the good society. Having there conceded the impossibility of fully settling these controversies about the proper relationship between capitalism and democracy, I will try to explain in chapter 5 why some of the answers given to that question are better and more persuasive than others. My concluding argument will be that any society that values liberal freedoms and wants to foster economic growth and efficiency needs to give a significant role to the capitalist marketplace. But I will also argue that both practical considerations and a dedication to moral and democratic values require us at times to constrain and supplement the workings of the invisible hand through the visible hand of a popularly elected government.

We cannot say for certain exactly what policies and arrangements maximize prosperity because of the frailty of our knowledge when it comes to determining all the cause-and-effect relationships that determine economic outcomes in today’s complex advanced economies. We cannot establish with certitude the most just distribution of social resources because of our entrapment in a world where perfect fairness is an impossibility. And we cannot say with certainty that one particular hierarchy of social goods constitutes the ideally best form of society, because not all good things are fully reconcilable with each other and because there is no way to establish the ideal balance among them.

What we should not waste our time or attention on are sweeping ideological claims that markets should do everything and governments nothing other than protecting private property, or equally sweeping claims to the contrary that the state needs to run nearly everything on behalf of a particular conception of justice or the public good. To maximize our hopes of achieving a prosperous democratic society with liberty, justice, civic equality, and genuine opportunity for all its responsible citizens to enjoy good lives, we need both strong markets and strong and competent government. We just need to assign them the tasks they are best suited to do and then continually to identify and make the adjustments and improvements necessary to enable them to do their jobs well. Easy to say, but a continuing challenge to do.

From Capitalism and Democracy: Prosperity, Justice, and the Good Society by Thomas A. Spragens, Jr. © 2021 by University of Notre Dame Press. Reprinted by permission of the publisher.