Wait was suspended last week after she complained on behalf of herself and other workers about conditions at the center, including a prohibition on speaking about salaries and a refusal by management to replace damaged water bottles for workers. Workers at the Google data center, located in Berkeley County, South Carolina, move heavy computer equipment, perform hardware maintenance, swap computer components, and perform other manual labor. According to Wait, workers at the center have seen their daily repairs doubled during the pandemic, increasing safety concerns.

A Modis supervisor questioned Wait about a personal Facebook post in which she’d expressed concerns about management’s failure to replace the water bottles and her support for the Alphabet Workers Union. The same supervisor previously sent an electronic message directing Wait not to discuss wages with her co-workers when she began asking questions about why some workers did not receive a promised bonus. Under the National Labor Relations Act, employees have a legally protected right to discuss their conditions of employment, including wages and salaries.

“These are the conditions that we face as TVCs—we’re paid less, we’re laid off when needed, and we often don’t have access to safe, transparent working conditions,” said Wait. “Alphabet and Google can do better to ensure that all workers, including their contractors, are treated fairly. Google became a trillion dollar company last year. They can afford to treat us right.”

A Shift From Majority Direct Employees To TVC Staff

Workers at Alphabet have noticed an alarming trend as the workforce has shifted from majority direct employees to majority temporary, vendor or contract (TVC) staff. This has led to growing disparity in pay, benefits and access for thousands of workers who are central to Alphabet’s functioning. Alphabet Workers Union is committed to standing in solidarity with all workers at Alphabet to ensure that our workplaces are equitable and transparent.

“We, the Alphabet Workers Union, stand in full support of Shannon Wait and all Alphabet workers, who deserve safe and transparent working conditions,” said Parul Koul, executive chair of the Alphabet Workers Union. “I want other TVCs to see this and know they have recourse if they see something illegal or unethical in their workplace. Alphabet’s segregated, two-tiered employment system will not stand in the way of worker solidarity. We will continue to support Shannon and all Alphabet workers against unjust working conditions and fear mongering from management.”

The unfair labor practice charge alleges that Modis management illegally prevented Wait and other workers from discussing their wages. It also alleges Google, Alphabet, and others, as joint employers with Modis, retaliated against Wait for protected concerted activity when she posted publicly about treatment facing her and her coworkers. The filing also alleges that Wait was retaliated against for her union support, which was made public days before she was told to turn in her badge.

“Shannon Wait’s experience highlights an all too common trend where management makes false claims about workers’ legal rights as a silencing tactic,” said Don Trementozzi, the president of CWA Local 1400. “It is part of the mission of our union to ensure that workers understand what their rights are and have the tools to fight back against management’s attempts to prevent them from using their collective power to improve their workplace. I’m proud that Shannon is taking a stand for her co-workers and all Alphabet TVCs.” 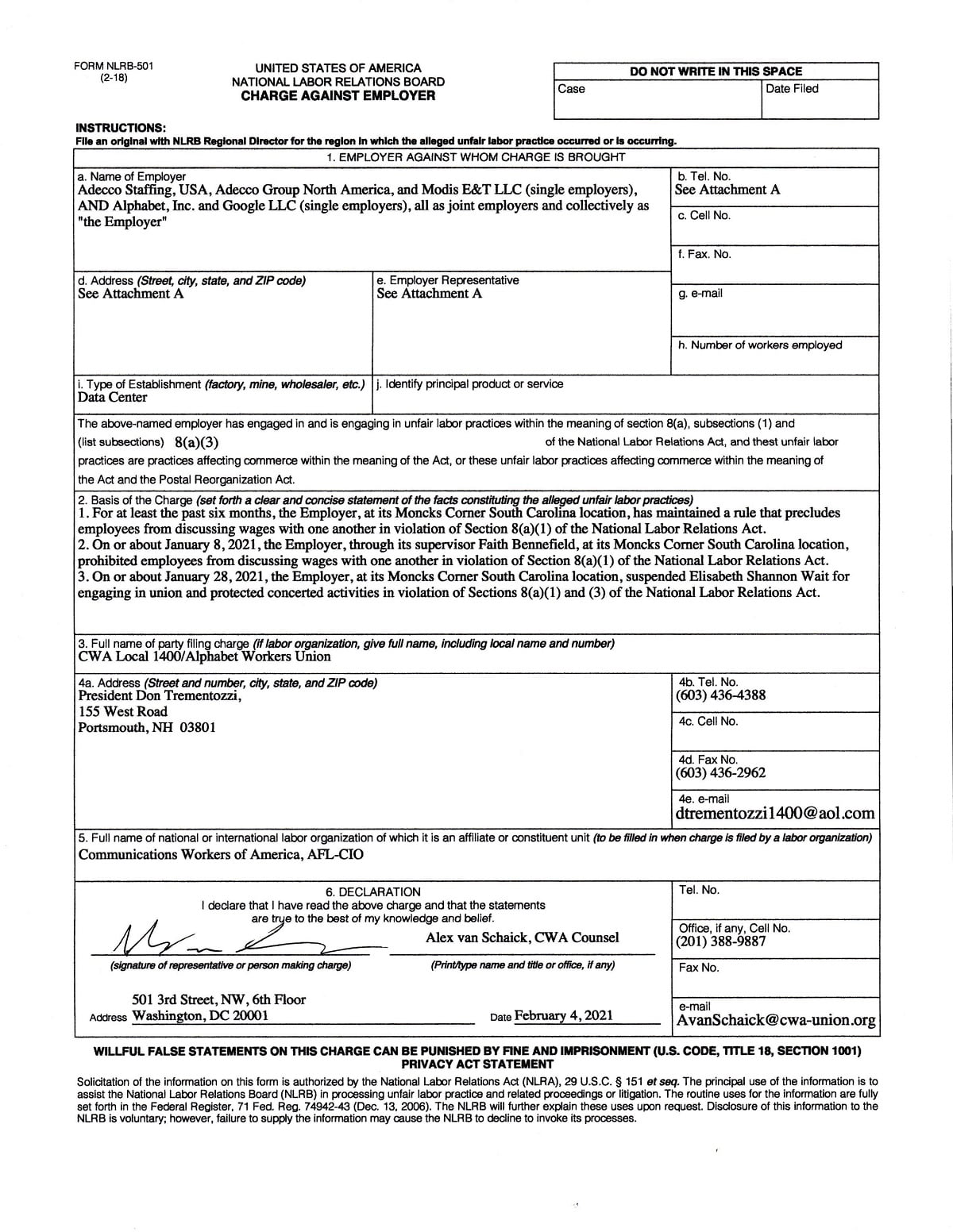 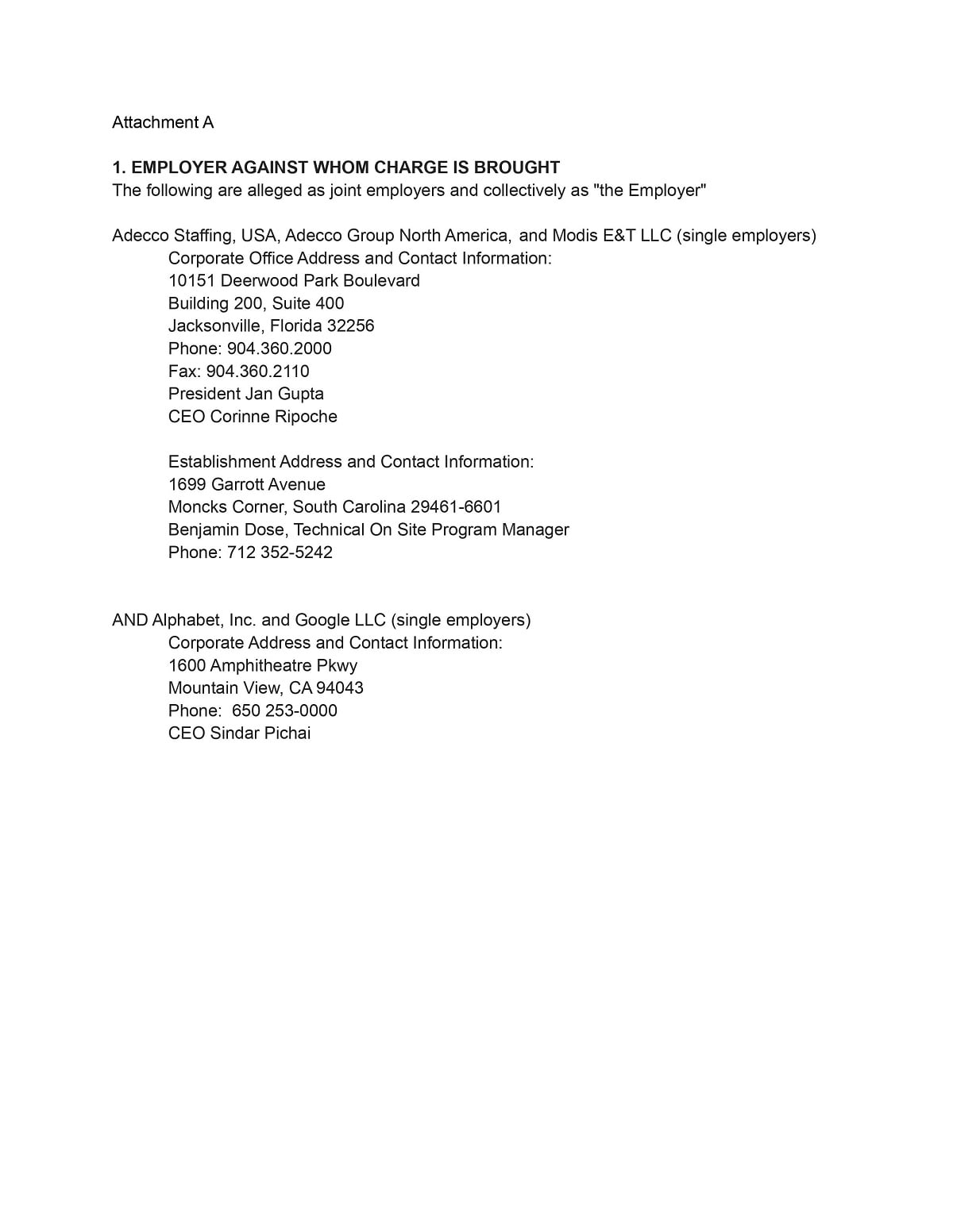 Alphabet Workers Union unites full-time employees, temporary employees, vendors and contractors at Google and other Alphabet companies in the United States and Canada in collective action to ensure that our workplace is equitable and that Alphabet acts ethically. We are members of Communications Workers of America Local 1400. Learn more at alphabetworkersunion.org or follow us at @AlphabetWorkers.