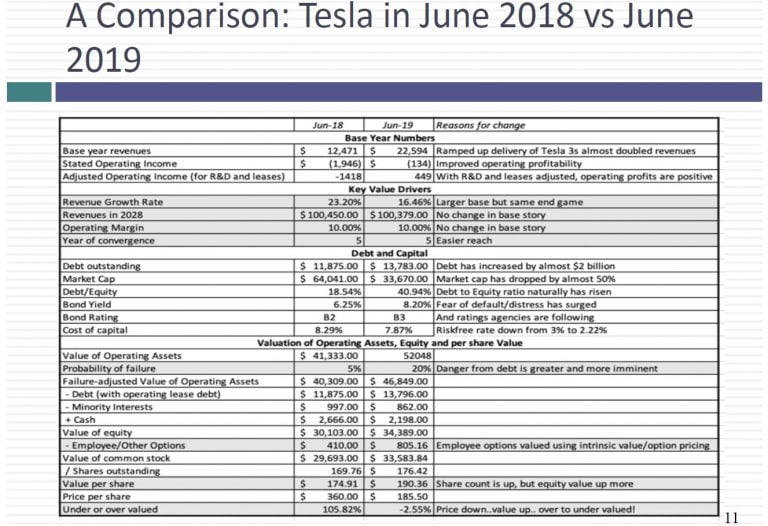 There are few companies in the world that manage to get in the news as much as Tesla Inc (NASDAQ:TSLA) does and draw such divergent reactions from investors. Tesla bulls are convinced that the company is miles ahead of its competition in the electric car business and that it is designed to dominate the auto business. Tesla bears are convinced that the company is a mess, one shock away from going under. In my June 2019 valuation, I navigate between the two sides, foreseeing a pathway for the company to get to $100 billion in revenues in 2028 and solid operating margins, but also building in a substantial chance of failure, primarily because of its debt load. I estimate a value per share of $190, marking the first time in my many attempts at valuing Tesla that I have found the company undervalued, albeit only by a little. While I have a limit buy order at $180/share, I also view the company as a corporate teenager, with the teenage capacity to risk immense potential for meaningless distractions (leaf blowers, insurance, flame throwers…).

Curfew For A Corporate Teenager? Tesla In June 2019

Welcome back. It's time again time to revisit Tesla and I would talk about a company that manages it in the news sometimes for good reasons but often for. For all the wrong reasons and right now Tesla seems to be in the crosshairs the distractions are mounting. Starting with Elon Musk and his escapades with the S.E.C. talk about electric lawn blowers the death spiral that might be created by debt in every conceivable way. This is a company that manages to step on its own lines get in the way of its own story. But I want to go back and look at the company because I still remain optimistic that in that there is a way that this company can make it to becoming an incredibly successful automobile company. So let me go back in time to June of 2018 which is when I lost value Tesla at that time the stock was trading at 360 and the story I told about Tesla and I described it then as an optimistic story was a company that would be managed to increase its revenues almost eight fold to 100 billion dollars. And while it was increasing its revenues and find a way to improve its pre-tax operating margins to 10 percent well above typical automobile company margins but in my view the company has a brand name as a capacity to have some pricing power that will allow it to those margins. Finally to make this this story complete I also assume that the amount of reinvestment that Tesla would need to make is less than a typical automobile company.

I'm not buying into Elon Musk robots on the assembly line completely yet but he's managed to find a way to extract more cars out of that Fremont plant than I ever thought possible so I'm going to let them alone to grow with less free investment than a typical automobile company. The bottom line is with those assumptions here's what happens as come as the company goes from small to large and revenues as its margins improve and its reinvestment start to tailor down as growth comes down the company's value starts to become much larger.

In fact the value that I get for the stock reflects also the assumption that there is a mild risk partly self-imposed because Tesla went out and borrowed all that money for no reason at all. They could have raised the capital the equity that puts them at risk and in 2018 that risk I assessed at about 5 percent the end game as I value the stock at about 170 to 180 dollars about half what the stock was trading at. So at that point my conclusion is Tesla's overvalued. I'm not going to take the risk of going against the stock of selling short because this stock were mood momentum and story can Christ carry the price further away from the value. I essentially walked away from the company a couple of months later as is will want to Elon Musk put himself back in the news again by his now infamous tweet about funding secured for a 420 dollar buyout and when it came out my reaction was Really Tesla's the target of a private bio that doesn't seem to meet the right target it's got it's a growth company where all of its value lies in the future it's it's got a substantial amount of debt and Scardino and musk and its management team what what buyout team would want to take this company private. And it turned out that the funding was not exactly secure that the for 20 dollars was more fiction than fact and in fact that tweet has created a host of problems through Tesla in the months following which I'll come back and review in a few minutes. So the funding secured clearly wasn't there. The 420 dollars was essentially made up and you can see essentially that no it's it's it's these distractions that effectively have pushed the company to where it is today. So let's talk about what's happened. June of 2018 for a company like Tesla lots of things seemed to happen. First let's start with the good news.

The good news is those Tesla 3s that started rolling off the assembly line started to push up revenues and the revenues have almost doubled over the course of the last year. Their margins have actually also moved in the right direction. They're still not quite making money on a consistent basis but they've had money making quarters money losing quarters and I think they're further along the pathway to profitability at least in terms of operating profitability than they used to be. Now what's the bad news. Well most of the bad news in Tesla is self-inflicted. And first there is that debt and when Tesla borrowed five billion in 2017 I remember writing about saying I could not think of a single good reason why Tesla would need to borrow money it needs capital. True. But it can raise equity. So what about tax benefits what tax benefits tesla 7 billion plus in net operating losses carried forward.

It's not gonna pay taxes in the foreseeable future. There was no good reason for borrowing money and that debt is not only still there. It's been added to in fact by June of 2019. That debt had mounted to more than 14 billion. In fact it was the talk about the debt.