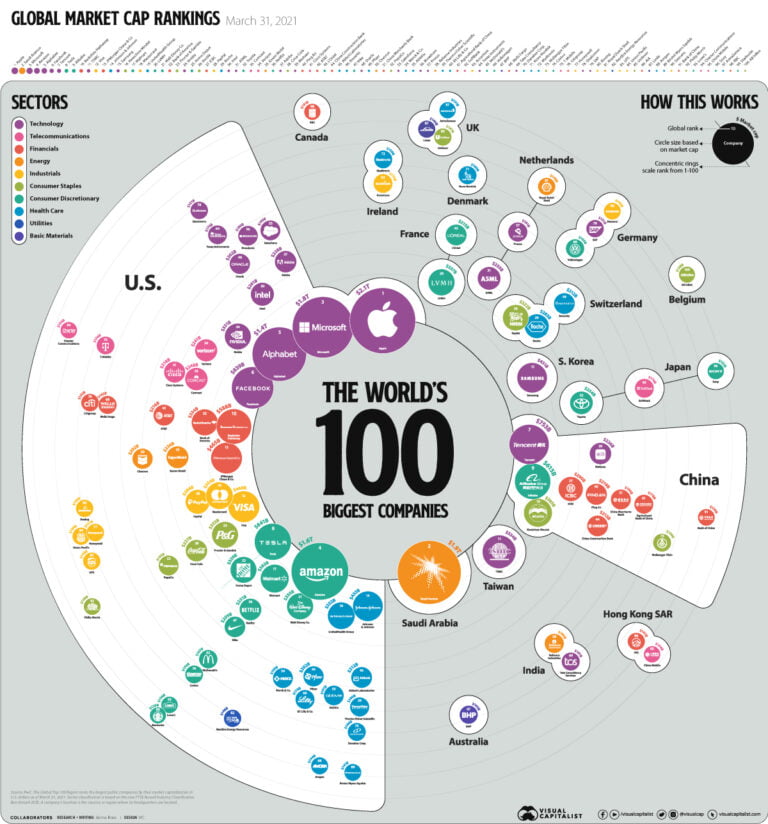 In today’s graphic, we use PwC data to show the world’s biggest businesses by market capitalization, as well as the countries and sectors they are from.

Here is the top 100 ranking of the biggest companies in the world, organized from the biggest to the smallest.

Within the ranking, there was a wide disparity in value. Apple was worth over $2 trillion, more than 16 times that of Anheuser-Busch (AB InBev), which took the 100th spot at $128 billion.

In total, 59 companies were headquartered in the United States, making up 65% of the top 100’s total market capitalization. China and its regions was the second most common location for company headquarters, with 14 companies on the list.

What are some of the notable changes to the biggest companies in the world compared to last year’s ranking?

Tesla’s market capitalization surged by an eye-watering 565%, temporarily making Elon Musk the richest person in the world. Food delivery platform Meituan and PayPal benefited from growing e-commerce popularity with their market capitalizations growing by 221% and 151% respectively.

Tech companies TSMC and ASML Holdings were also among the top 10 risers, thanks to a shortage of semiconductor chips and growing demand.

On the other end of the scale, Swiss companies Nestlé, Novartis, and Roche Holding were all among the bottom 10 companies by market capitalization growth. China Mobile was the only company to decline with a -12% change. The company was delisted from the New York Stock Exchange as a result of an executive order issued by former president Donald Trump, and recently announced its intention to list on the Shanghai Stock Exchange.

Across the 100 biggest companies in the world, some sectors had higher weightings.

Technology had the highest market capitalization and was also the most common sector, with Big Tech dominating the top 10. Companies in the consumer discretionary, financials, and health care sectors also had a strong representation in the ranking.

Despite having only five companies on the list, the energy sector amounted to almost 10% of the top 100’s market capitalization, mostly due to Saudi Aramco’s whopping valuation.

From near market lows on March 31, 2020, all sectors saw increases in their market capitalization. However, top 100 companies in some sectors outperformed their respective industry index, while others did not. 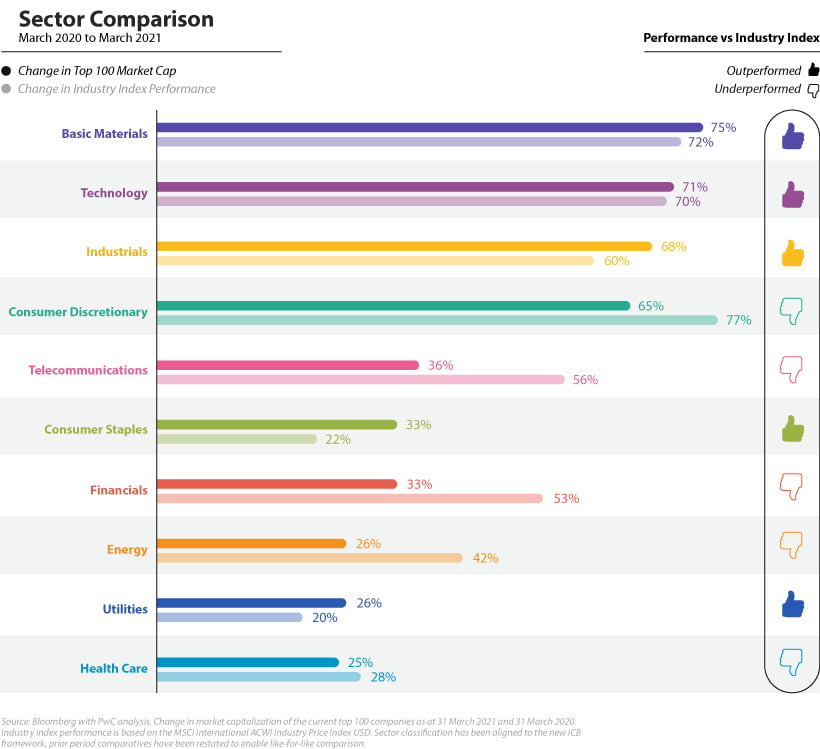 Basic materials and industrials, both cyclical sectors, were high performers in the top 100 and outperformed their respective industry indexes. Technology companies also outperformed, and accounted for $255 billion or 31% of all shareholder distributions by the top 100, far more than any other sector. Apple alone spent $73 billion on share buybacks and $14 billion in dividends in the 2020 calendar year.

On the other hand, the worst-performing sectors in the top 100 were health care, utilities, and energy. While the index performance for health care and utilities was also relatively poor, the wider energy sector performed fairly well.

It’s perhaps not surprising that all sectors saw positive returns since their low levels in March 2020, buoyed by fiscal stimulus and central bank policies. As countries begin to reopen, will the value of the biggest companies in the world continue to climb? 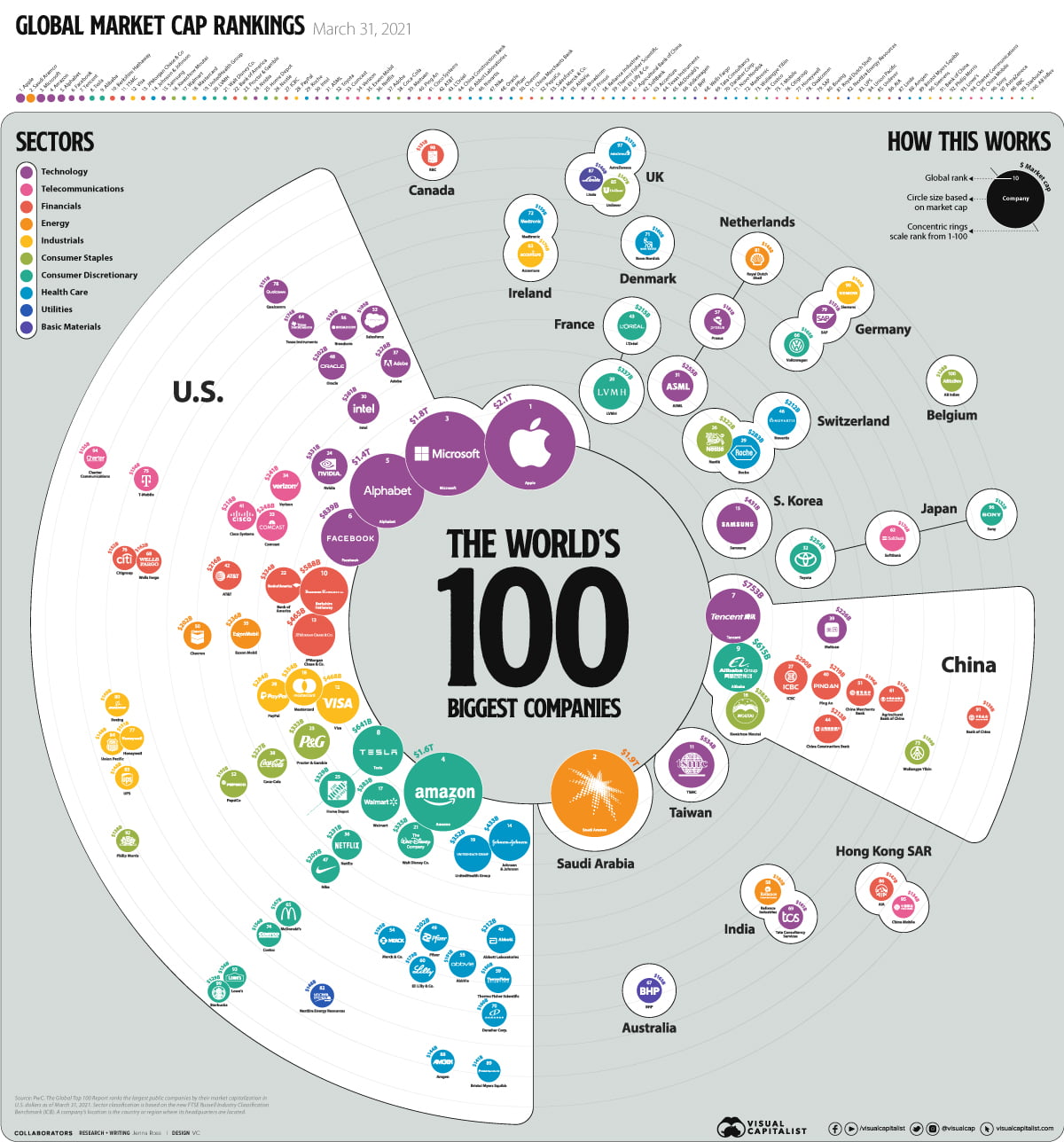