ValueWalk
Home Business Powell: Inflation Can Rise In 2021 – So What Happens to Gold? 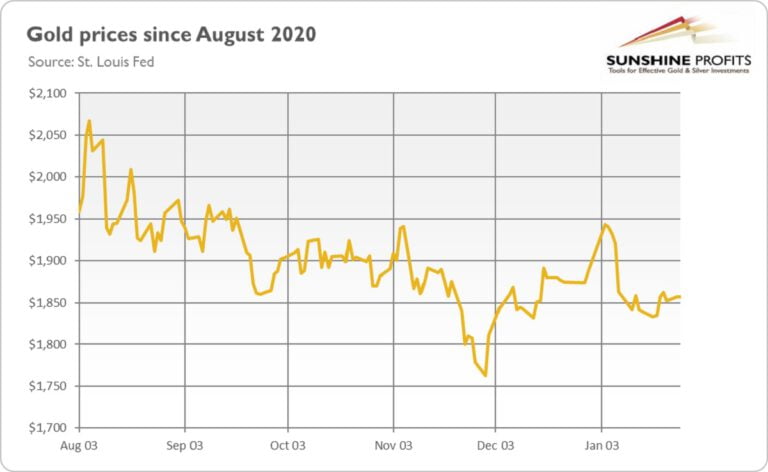 The first FOMC meeting in 2021 has concluded without any changes in monetary policy, while Powell sent a few dovish signals during his press conference.

Powell: Inflation May Rise In 2021

The FOMC released on Wednesday (January 27) its newest statement on monetary policy . Generally speaking, the statement was little changed. The main alteration is that the U.S. central bank has acknowledged that “the pace of the recovery in economic activity and employment has moderated in recent months”. Wow, how did they notice that? They really must hire professionals! All jokes aside, this modification in the FOMC statement is dovish . Consequently, when analyzed separately, it’s positive for the price of gold.

Another change is that the FOMC now believes that “the ongoing public health crisis continues to weigh on economic activity, employment, and inflation, and poses considerable risks to the economic outlook”. In December, the Fed thought that the pandemic would impact inflation only in the “near term”, with risks to the outlook “over the medium term”.

However, when considered holistically, the January statement is rather bad for the yellow metal , as the Committee neither changed the federal funds rate nor expanded its quantitative easing program . So we have another month without any additional easing of the U.S. monetary policy. Luckily, the ECB also didn’t loosen its stance, but still, the lack of any fresh dovish moves by the Fed is not helpful for gold.

Luckily, Powell comes to the rescue! Although he generally sounded rather neutral during his press conference , the Fed Chair has sent a few important dovish signals. First, he clearly excluded the possibility of premature tapering and the replay of 2013’s taper tantrum , saying that “the whole focus on exit is premature if I may say. We’re focused on finishing the job we’re doing, which is supporting the economy, giving the economy the support it needs.” The continuation of the quantitative easing, which will take years, is positive for gold.

Second, Powell acknowledged that inflation will increase in 2021, admitting that the Fed will not react to this rise, as it would be only transitory: “We’re going to be patient. Expect us to wait and see and not react if we see small, and what we would view as very likely to be transient, effects on inflation”. This is great news for gold, which is considered by many investors as an inflation hedge . Higher inflation, with the central bank behind the curve, also implies lower real interest rates , which will support gold prices.

What does the recent FOMC meeting imply for the gold market? Well, so far, it has reacted little to the Fed’s statement on monetary policy. The reason is simple: the lack of any moves was widely expected, so the markets got no surprises and reacted weakly.

However, the easing of the monetary policy could provide a fresh bullish signal that gold seems to need right now. Without such a spark, gold may continue its bearish trend for a while (see the chart below). And, although the markets did not expect any significant announcements from the Fed, some analysts speculated that the U.S. central bank could provide some guidance about the yield curve control. But it didn’t – so further declines wouldn’t be surprising in the short-term. 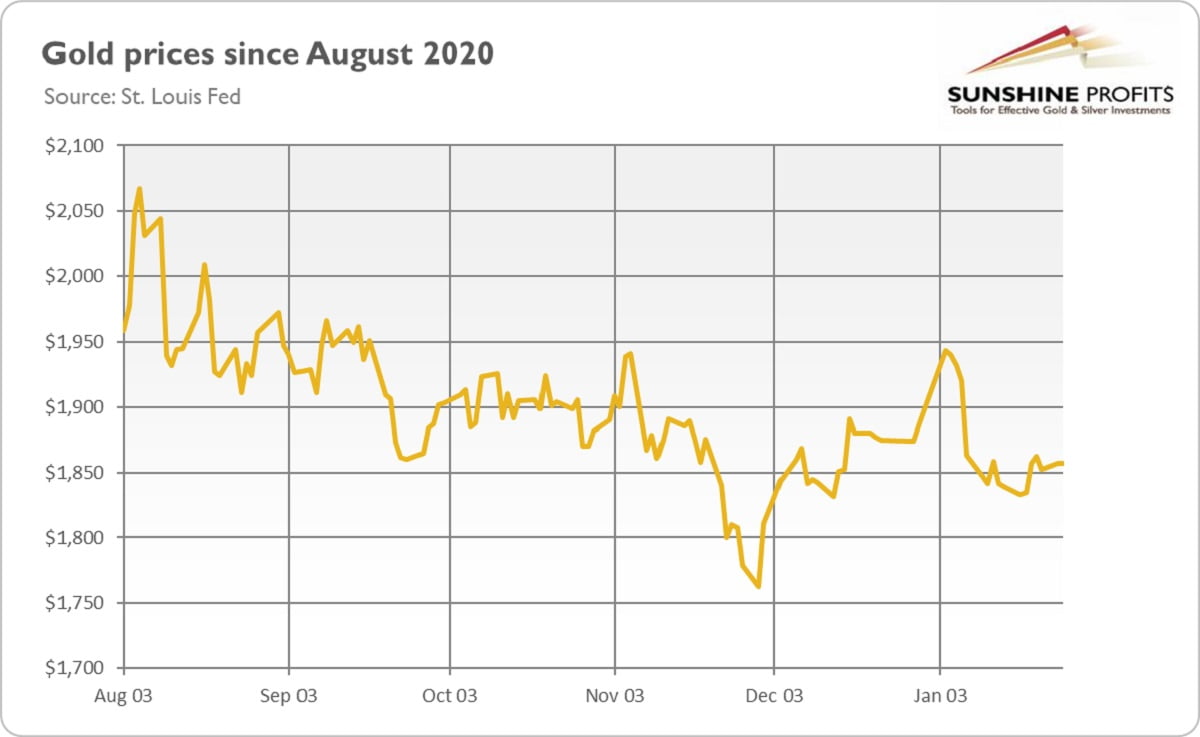 Some analysts even say that the gold’s price pattern of 2020-2021 resembles the period of 2011-2012. If true, it would be a terrible news for the gold bulls. However, history never repeats itself, but only rhymes. The current fundamental outlook is different. Why? Well, this time, in addition to quantitative easing and ZIRP , we also have a very easy fiscal policy with ballooning federal debt and new large fiscal deficits in the pipeline.

Another difference is the Fed’s stance. Right now the U.S. central bank openly admits that there is a possibility of upward pressure on inflation , but ask the markets to “expect us to wait and see and not react” (emphasis added). Well, the rise in inflation may be indeed only transitory – but, hey, didn’t they say the same before the 1970s stagflation ?