1) Cathie Wood’s statement on why ARK was selling. This makes sense:

Ahead of the report, we received several questions about our recent trading activity in TSLA. During risk-off periods, we concentrate our portfolios increasingly into our highest conviction names. Earlier this year, even though the equity markets were open and operating, fears spread that Tesla would run out of cash before it could finance its aggressive expansion plans. As the stock dropped below $200, we increased the position in our flagship strategy to 10%, a level beyond which we could not buy based on our investment guidelines. Subsequently TSLA appreciated more than 30% relative to the rest of the names in our flagship portfolio, pushing its position size beyond 13%, at which point - again based on guidelines - we started taking profits. Nonetheless, it remained and remains the number one stock in that strategy and many of our other strategies.

2) Tesla had a call yesterday at 5pm ET to (once again) hype its solar roof. You can listen to it here. More on this later… In the meantime, here’s a comment on the VIC message board:

Tesla held a "Solar Roof v3" "unveiling" call tonight. On their earnings call, they announced they were going to have an event for solar roof on Thursday. Yesterday they rescheduled the event for 5pm on a Friday. During the event they never displayed a picture or video of the actual product. Clearly there was no actual planning that went on before this event. They took pre-submitted questions and then questions from fanboy bloggers and youtube personalities. Of course the purpose of this event wasn't to actually unveil any sort of product it was to distract from the damning Elon Musk deposition which became public today.

For the record, the purported solar roof v3 product (who knew there was even a v2) is more expensive than buying a new roof and installing new solar panels, has had little to no product testing actually done on it, and Tesla refused to answer how many installation people or contractors they have hired to actually install the product.

And here’s an article about it: 5 Reasons Not to Get Too Excited About Tesla’s New Solar Roof. Excerpt:

Even after deception and misdirection, Elon keeps us coming back for more.

The solar roof started life as a stunt back in October 2016, when the Tesla CEO unveiled a rooftop of solar tiles at Universal Studios’ Desperate Housewives set. They looked real, but turned out to be nonfunctional props.

3) No wonder Musk was trying to distract people with more solar roof nonsense late yesterday – he must have known that the transcript of his deposition was coming out at the same time (attached; related to the lawsuit by Tesla shareholders about the Solar City acquisition).

I haven’t had the chance to read the entire 136 pages, but apparently it’s a disaster for Musk, revealing (yet again) that he is a pathological liar and an angry, thin-skinned, narcissistic bully. Here’s a comment from the VIC message board: “It is hilarious the depths to which Elon will go to commit fraud. For the record Elon believes that if you are a public company you can always raise money by issuing equity.”

Here’s an excerpt (thanks TeslaCharts) in which he “gets cornered on his lie that SolarCity would not increase $TSLA debt. Once he realizes he is trapped, he reverts to petulant series of "I don't recall" answers, and then lashes out at Mr. Baron in yet another fit of narcissistic rage.” 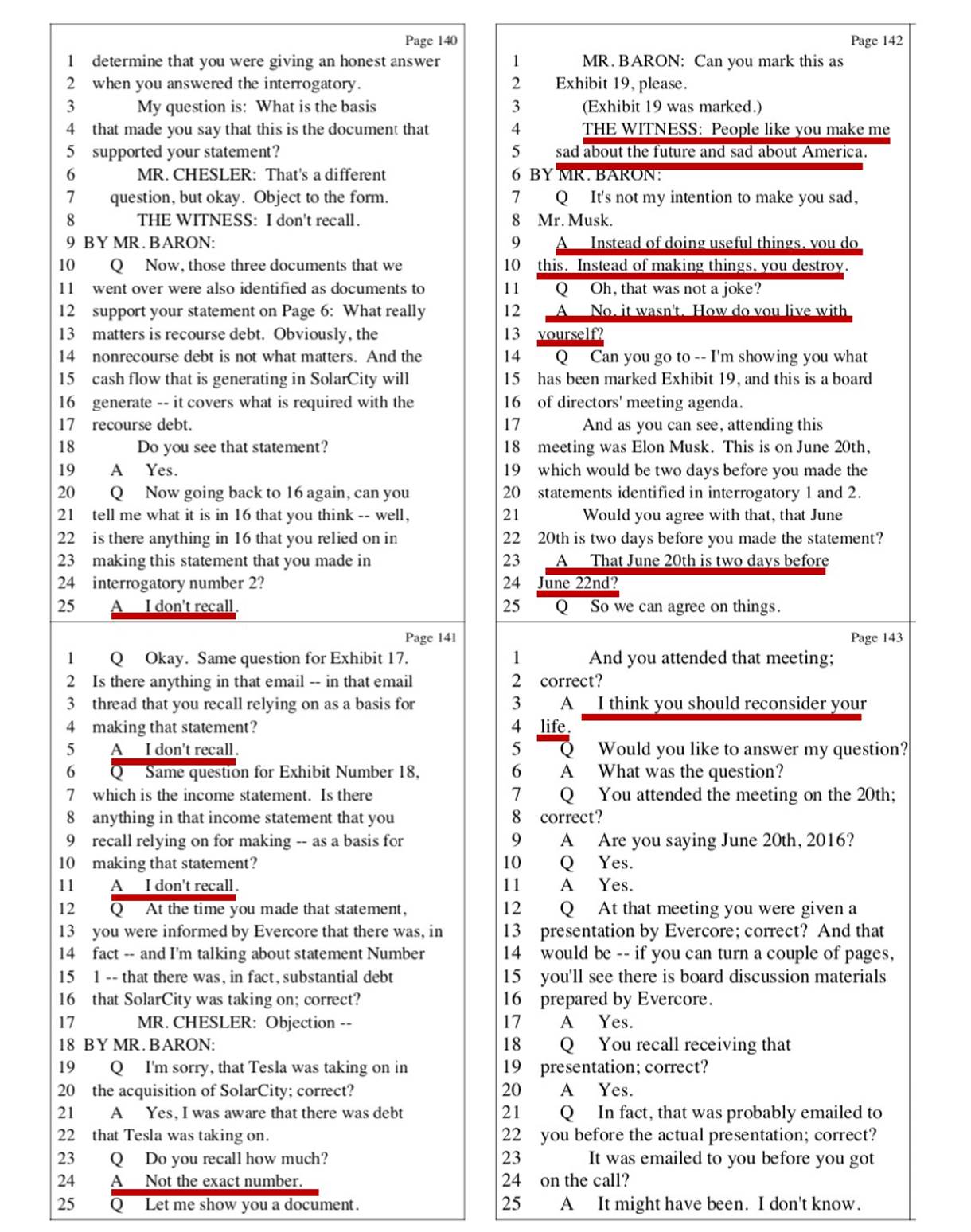 4) Here’s a good thread on the VIC message board:

Elon succeeded in distracting attention away from a large topline miss including Tesla’s first negative YoY revenue quarter since Q3 2012 by printing an unexpected large profit for the quarter. The profit “beat” was almost entirely non-operating or one time items that were not in sell side models (like the end to restructuring expenses or the large FX gain.)  I don’t think this quarter proves that Tesla has hit a profitability inflection point though it probably proves that Tesla isn’t going bankrupt anytime soon.

It was shocking how little time was spent on the earnings call (especially in the prepared remarks) on the large QoQ improvement in Tesla’s automotive gross margins. You would think Elon would want to spike the football if Tesla really had magically come to some new level of sustained profitable margins. It’s not entirely clear why margins improved 393bps QoQ though it seems likely related to some sort of accounting change or other financial engineering. We’ll know more when the 10-Q comes out but it seems pretty clear there was some sort of change to vehicle depreciation schedules and/or inventory accounting in the quarter.

It continues to make no sense how the company can be launching so many vaporware products without any increase in r&d expenses. Likewise how is it possible that Tesla is building the Shanghai factory, buying tooling for the Model Y, et cetera with capex down 48.5% YTD. The reported financials really don’t make any sense any more.

I think there's generally a lack of understanding or appreciation for the growth of Tesla Energy was talking about. In the long term, I expect Tesla Energy to be of the same -- roughly the same size as Tesla's automotive sector or business.

This is the most underappreciated -- I think it could be bigger, but it's certainly of a similar magnitude to Tesla solar meeting Tesla solar factory stuff is Tesla Energy is I think the least appreciated development. And part of it is like for about 18 months, almost 2 years, we actually delivered a tremendous amount of resources. We basically take resource from everywhere else in the company and applied them to the Model 3 production, fixing the Model 3 production ramp and simplifying the Model 3.

So for about 1.5 years, we unfortunately stripped Tesla Energy of engineering and other resources, and even took the cell production lines that we meant for Powerwall and Powerpack and redirect them to the cars in ourselves.

Now that we feel that Model 3 production is in a good place and headed to a great place, we've -- we restored resources to Tesla Solar and storage. And so that's going to be I think the really crazy growth for as far as I can imagine.

But we have to do it because we didn't solve Model 3 (inaudible). So unfortunately, that pretty much the other perts of the company. But it would be difficult for me to obviously called Tesla Energy is going to be a major part of Tesla's activity in the future.