Compared to the last financial year, revenue increased by 21 % while net earnings increased by 80%. You can be forgiven for thinking that this is a good investment opportunity.

But Lennar is a homebuilder. The homebuilding industry is a cyclical one and any fundamental analysis of Lennar should be through a cyclical lens. Based on such a lens, there is no margin of safety at the current market price. The market is pricing Lennar as if it is a growth stock.

The supporting analyses for the above are presented in the following sections.

As can be seen from Table 1, Lennar did well in the early part of the last decade when its revenue grew faster than both the top 9 group and the Housing Starts. But from 2018 onwards, its growth was not exceptional.

However, if you looked at the overall picture, Lennar’s share of the top 10 homebuilders’ revenue increased from 14% in 2010 to 25 % in 2020.  Note that the top 10 revenue here included that of Lennar. But this growth covered both organic and inorganic. This meant that the overall growth was due more to the acquisitions rather than organic growth.

What does this all mean moving forward? Lennar had grown to a size where it is unlikely to increase its market share significantly via organic growth.

There were about 7 cycles during the last 70 years with the longest cycle stretching from around 1992 to 2010. There are 3 takeaways from the chart and Trading Economics outlook.

Any long-term projection of the Housing Starts should thus be based on reversion to the mean.

Any continuous long-term growth for a homebuilder must be because it is taking market share from its competitors. I had shown earlier that Lennar had not been able to grow its market share over the past few years.

This is not to suggest that there would not be any organic growth for Lennar. Rather any revenue growth would mainly be tied to a price increase rather than an increase in unit sales volume.

While Housing Starts did not show any long-term uptrend, house prices behaved differently. Based on the Federal Housing Finance Agency House Price Index, house price increased at a 4.3 % CAGR from 1992 till Aug 2021.

While there is no long-term growth in the Housing Starts, the homebuilders’ industry revenue would still have growth due to unit price growth. But this is growth at about the US long-term GDP growth rate. Again, it showed that this is not a growth sector.

There are two key macro trends driving the demand for houses in the US currently.

Looking at both these factors, I would conclude that the Housing Starts would overshoot the long-term average in the current cycle.

To get a picture of how it will overshoot, I used the following model:

The chart below shows the Housing Starts projections under the 2 scenarios. 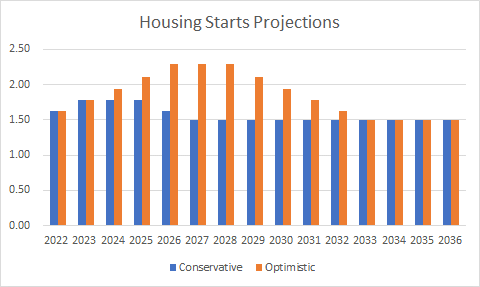 Furthermore, I do not expect any change to the long-term average given that it is 6-decades Housing Starts average.

I do not think anyone would dispute that Lennar is a fundamentally sound company. To get a sense of this, I looked at 2 parameters - shareholders’ value creation and financial strengths.

Firstly, Lennar had been able to create shareholders valued from 2010 to 2020. I assessed this based on 3 metrics where I compared the returns with the respective cost of funds as shown below. Shareholders’ value is created when the returns are greater than the cost of funds.

(a) This looked at how a shareholder would have gained if he bought one share at the end of 2010 and held onto it till end of 2021 as computed in Table 3. Unlike the other two metrics, this one is a share market-based view.

Secondly, Lennar is financially sound with a Debt Equity ratio of 0.3. This has been reducing over the past 12 years. Part of this was due to debt retirement and part was due to the increase in the SHF.  Its financial strengths had enabled it to finance its land purchase as well as price its properties to the current market conditions. These in turn resulted in better gross profit margins. 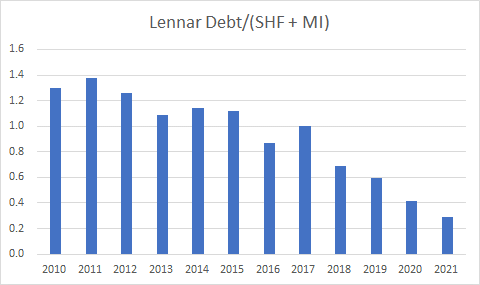 The issue is not whether Lennar is a good company. The question is whether the market has overpriced Lennar.

If you view Lennar as a cyclical company, then the various parameters used in the valuation should be based on some “normalized” values. I assumed the following in my valuation.

My valuation model was based on a single-stage model with the following.

I obtained the following values for Lennar:

As you can see there is hardly any margin of safety based on a cyclical perspective.

Using a cyclical model is of course a conservative approach. While the results showed that there is no margin of safety, there are 3 potential upsides to the above valuation.

My cyclical model assumed that any “overshoot” to the long-term average Housing Starts would be offset by the “undershoot” on the way down. But given the housing deficits, it is possible that there would not be any “undershoot” on the way down. This pattern is as shown in Chart 3. If this happens, there would an additional value from the portion above the long-term average.

I estimated that this ‘above the long-term average portion” would be equivalent to another USD 9 per share. For this valuation, I assumed that this portion would result in additional gross profits but without additional SGA. I also took the Optimistic Scenario as per Chart 3.

If I incorporate the additional values from items 1 and 3, we have the following valuation picture: 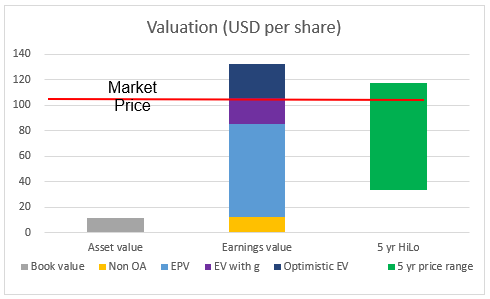 The point is that there is at least a 25 % margin of safety if you assumed that these upsides materialize. But this is viewing Lennar as a form of growth stock. You are assuming that it can grow earnings by reducing its SGA margins. You are betting on its investments in the PropTech companies. And you expect the Housing Starts pattern to change. I would not bet on them.

Besides if you want to value Lennar as a growth stock, you would have to assumed that there would be future acquisitions. My perspective is that of a long-term value investor where growth is organic.

Lennar is the leading homebuilder in the US. It reached this stage due mainly to acquisitions. Moving forward growth would be organic.

While it is a good company based on its fundamentals, Lennar is not an investment opportunity based on the current price.  This is because there is no margin of safety for the EPV or the Earning Value with growth based a cyclical model.

However, there are potential upsides. But if you are a conservative value investor, you should not bet on them.

Editor’s Note: The article is from H.C. Eu who blogs at Investing for Value. He is a self-taught value investor and has been investing in Bursa Malaysia and SGX companies for more than 15 years. His value investment experience has been enhanced by both his Board experiences and his contacts with controlling shareholders of many Bursa Malaysia’s listed companies. These have given him a unique opportunity to be able to analyse and value companies differently from other research houses.  If you enjoyed this piece, you can find similar pieces and other value investing tips in his blog.