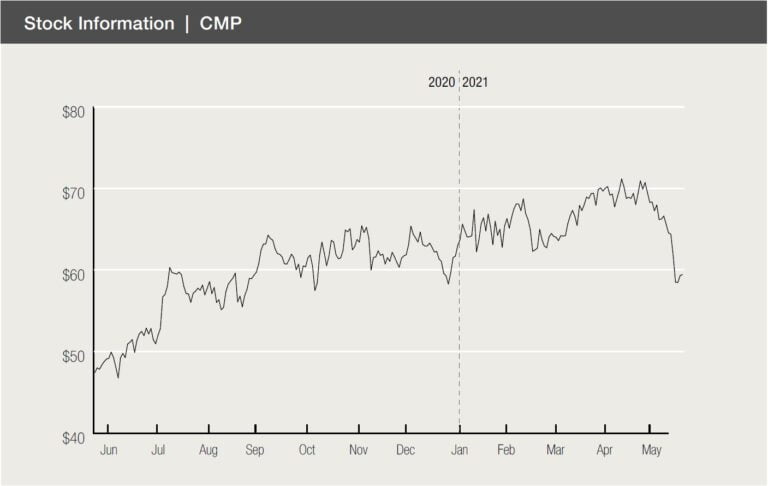 Since our interview, shares in Compass have rallied around 20%, excluding dividends, while Macquarie has added around 23%, although at one point, the stock was up nearly 31%.

Cove Street has sold Macquarie, but it continues to hold Compass Minerals. We recently caught up with Ben to ask him why Cove Street still owns Compass and why it decided to sell Macquarie.

Shares in Compass have struggled over the past 12 months. Do you think this is a correct reflection of the firm’s progress during this period? In general, we are far more focused on the business fundamentals than we are on short-term moves in the stock. We are firm believers in the old Ben Graham saying that the market is simply a voting machine in the short-term but is a weighing machine in the long-run.

As such, we get excited when we see the fundamentals improving and the market not fully appreciating the internal changes that are occurring.

What has been very encouraging to us is the improvements in the margins in CMP’s Salt segment. When CEO Kevin Crutchfield came in, he quickly recognized that the prior management team had wasted hundreds of millions of dollars due to the poor re-designing of the company’s largest mine in Goderich, Ontario. It appears that the changes that Kevin has instituted are working and the company even claims that there is more room for improvement. Also, we were pleased to see that, despite the fact that the 2020-21 winter season did not have many snow events, the amount of salt sold during that period was actually fairly strong.

On the other hand, execution within the company’s Plant Nutrition segment has been somewhat lackluster. CMP is having some issues with production in its evaporation ponds in Utah and the result is lower than expected margins. The company is very focused on these issues, but they have not yet been corrected to date.

Overall, we are quite happy with CMP’s progress and the fact that there is more room for improvement is suggestive of a higher earnings power in the future.

When we last spoke, you speculated that Compass might be open to selling its struggling South American business when M&A markets opened up. Has the company made any progress here?

The company has indeed made progress on that front. In March, CMP agreed to sell part of the Brazilian business to ICL, the Israeli chemicals company, for over $400mm. In addition, there are rumors that the part that ICL did not buy is going to be sold for $60mm. If CMP ends up getting $450mm+ in proceeds from these sales, it will be a nice de-levering event and free the company up to invest more in the areas in which it has a true circle of competence.

This time last year, Cove Street’s valuation for Compass was around $70 to the “mid-$80s” per share. Has this changed over the past 12 months?

With the asset sales and the improvement in Salt margins that we think is sustainable, our research suggests that the value has moved into the mid- $80s. However, you can get more upside if CMP is able to improve the Goderich mine margins to the degree that management is targeting.

I should not neglect to mention that CMP is still subject to the vicissitudes of winter weather and specifically the amount of snow and ice in certain regions of the U.S. So, it is a little hard to value CMP on any one year’s earnings power or cash-flow-generating capacity. CMP is a little bit of an odd duck for which you need to try to establish an estimate of normalized earnings power. 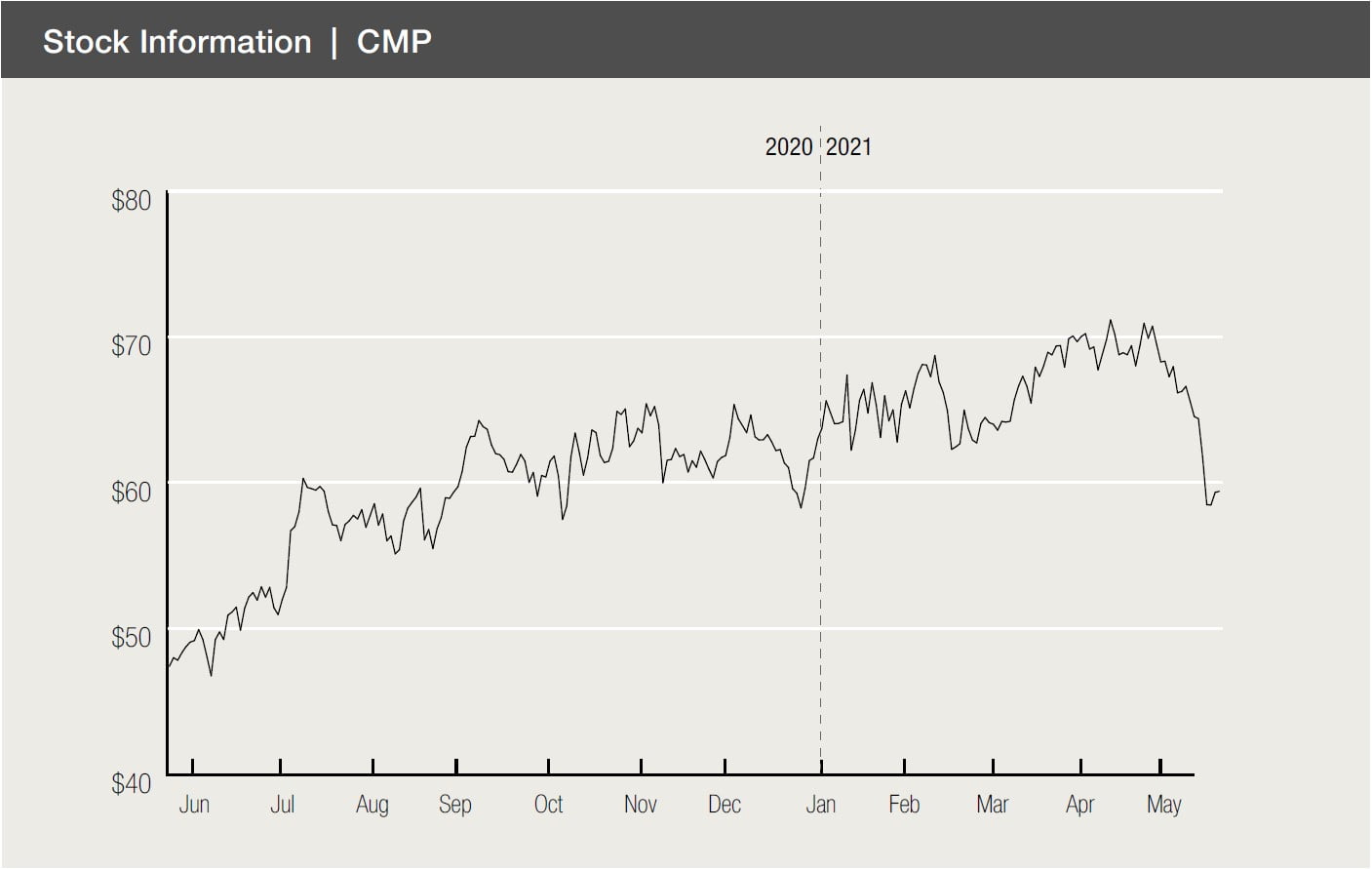 You could also see room for improvement on the balance sheet. This time last year, Compass carried net debt to EBITDA of 3.7x. Has it managed to reduce leverage?

Again, with the asset sales and the cash the company has been generating from operations, leverage is falling. Specifically, the company is calling for net debt to EBITDA to fall into a range of 2.75x to 3x, a much more manageable level. We are sleeping much better at night knowing that the leverage overhang is abating. Further, we are not underwriting multiple expansion from here. But, one could argue that the amount of leverage has been a cloud hanging over the company for years and as that issue is resolved, the uniqueness of CMP’s assets—both in salt and in North American sulfate of potash—may become better appreciated by the market. The Compass seems to have made a considerable amount of progress over the past year. It is forecasting another strong year in 2021.

Where do you think the business can go from here? Do you see further organic growth, or will management look for acquisitions?

This is the most important question regarding CMP. There are a few big decisions the company needs to make. For instance, K+S, the owner of Morton Salt in the U.S., is selling that business to a private equity company called Stone Canyon. The DOJ looked at the deal and is requiring the divestiture of certain assets before it will approve the sale. It would not be a needle moving deal, but the Morton assets might represent a nice acquisition for CMP.

The issue with CMP is that North American salt is not really an organic growth business. It is a business with great margins and pricing power that periodically sees a windfall from snowy winters but then is negatively impacted by more benign conditions. It is hard for public markets to value companies like CMP and therefore I have evolved to firmly believe that CMP would be much better as a private company. That is not to say that the management team can’t improve margins and become better operators— they can. The point is that, post the divestitures of the Brazilian businesses, CMP consists of two businesses that don’t necessarily belong together—a salt mining business and an agriculture business.

As such, to really create value for shareholders, our research has indicated that it might make sense for CMP to first become a pure-play salt mining company by divesting the SOP business that is currently a monopoly in the U.S. Then, the management team will be in a better position to assess if the stock market is capable of fully appreciating its salt assets. If not, our sense is that CMP’s salt business would be a perfect addition to a company that had multiple segments and could tolerate variable cash flows. Or, a good acquisition by a private owner who viewed CMP as more of a core “infrastructure” company and would value it as such.

Finally, last year you noted that the group’s dividend was draining cash that could be used to reduce debt.

Now that the enterprise has cleaned up its balance sheet, do you think this is more sustainable?

We do think the dividend is more sustainable now. Barring something totally unforeseen, CMP should have no trouble paying out its dividend, even in years when the snowfall is light.

Macquarie Infrastructure has nearly doubled in value over the past 12 months. Can you explain why you decided to sell the stock?

When we last spoke, MIC was in the process of looking at strategic alternatives for all of its businesses. Since then the company has sold its IMTT business for a pretty nice multiple and just agreed to sell the Atlantic Aviation and Hawaiian businesses as well. We admittedly have missed some of the latest run-up in the stock. We sold when the stock popped because Blackstone agreed to acquire Signature Aviation, a great comp for Atlantic Aviation.

If you assumed that the multiple Blackstone was paying was fair for Signature, the fair value of MIC was around $30. What we missed is that MIC would be able to find a buyer to pay 16x 2019 EBITDA for Signature. At the time of our initial interview, you placed a price target on the business of $45 per share. How have recent developments changed Cove Street’s price target?

It is important to remember that MIC paid an $11 special dividend after it sold the IMTT business. So, our fair value estimate around $30 (post dividend) equates to a $41 value. In reality, MIC got a little bit lower multiple for IMTT than we were hoping for. But the management team got a higher value for Atlantic Aviation than we thought. In any case, the price at which we sold the stock was in line with the value we discussed last time.

You also speculated that the stock could be worth as much as $50 as the aviation industry recovered. The industry has staged a steady comeback in recent months. Does your research show the firm’s aviation business has been permanently impaired?

If anything, the aviation business has proven to be worth more than we ever thought. So no, there has definitely not been any permanent capital impairment. We recognized a great asset; we just underestimated how attractive it would be even in the midst of a prolonged pandemic. 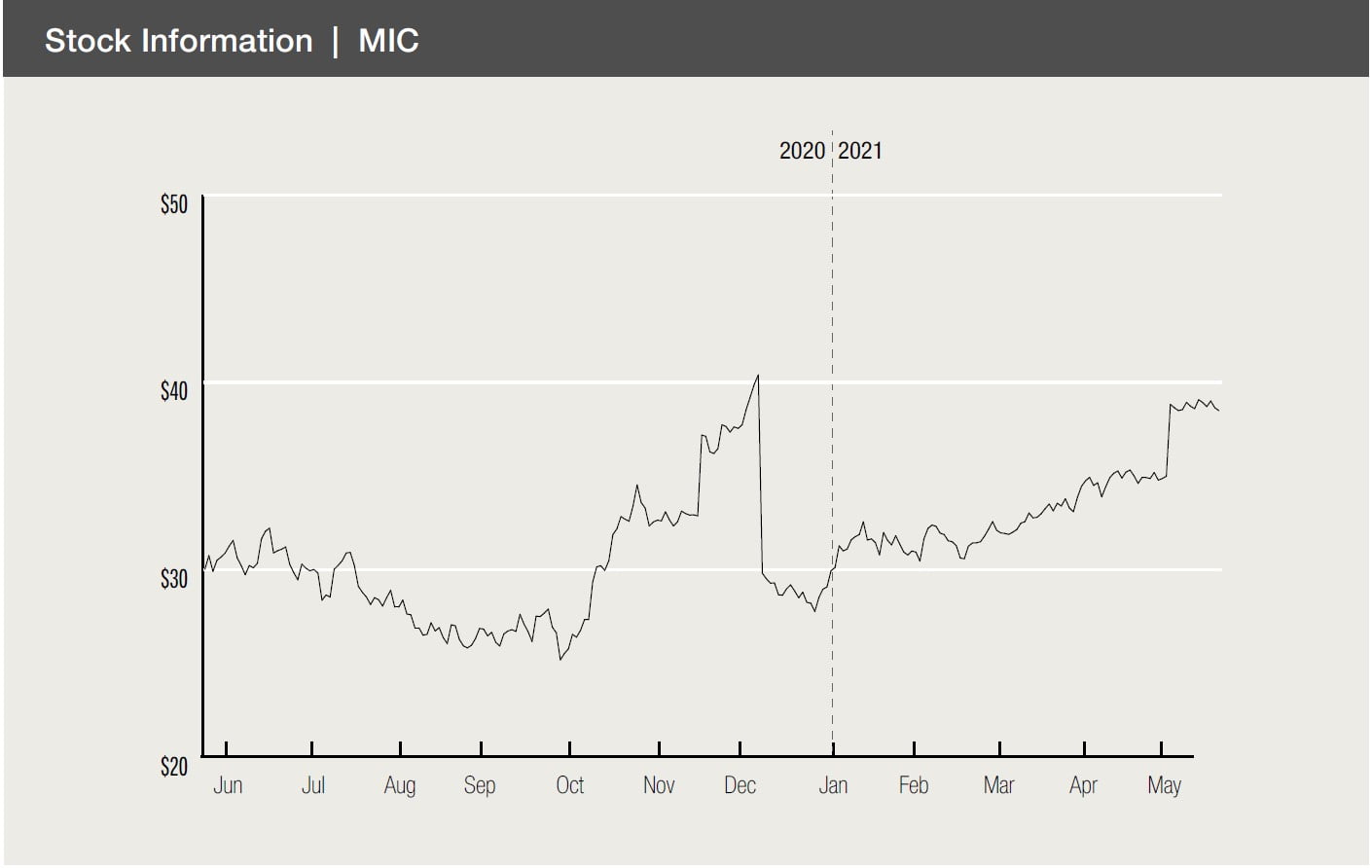 How much progress has the company made in unwinding its portfolio of private assets?

Just last week MIC announced that it had an agreement to sell the last asset, the Hawaiian gas utility. When all is said and done in 2022, the total proceeds from the three sales will be over $52 per share. So, our $45 estimate was actually low!

At the time of our original interview, you noted that the firm’s leadership team had not “covered itself in glory” with its capital allocation and balance sheet management.

Considering everything that has happened over the past 12 months, do you still think management’s leadership skills are lacking?

The management team messed up, had to cut the dividend and has spent the last few years trying to recover. In fact, I think they did a great job in liquidating the portfolio. If you go back to our original conversation, our contrarian premise was that since Macquarie invests in both public and private assets, the parent company had a very good sense for what the assets would be worth in the private market. COVID certainly delayed the gratification but when management told us that the assets would be more highly valued in private hands, they were absolutely correct.