ValueWalk
Home Business Consumer Prices Rise Most In 13 Years, Up 5% In May

1. US Inflation Highest in 13 Years As Prices Surge 5%

3. The Supreme Court Seriously Reins in the IRS – Good!

We’ll touch on several bases today. We begin with last week’s surprising report on inflation in May, which saw consumer prices rise the most in 13 years. For the year ended in May, the CPI surged at an annual rate of 5%, well above the pre-report consensus.

As I’ve explained in recent weeks, a big part of the recent increase in inflation is because we are coming off some extremely low inflation readings from this time last year during the COVID recession. The question is whether the latest jump in May is more than the calendar-effect or is it truly just “transitory,” as the Fed would have us believe?

Finally, we’ll look at a recent key ruling by the Supreme Court which significantly reigns in the Internal Revenue Service. This landmark decision (in my opinion) has received almost no coverage by the mainstream press, so I want to make sure my clients and readers know about it. Let’s get started.

US Inflation Highest in 13 Years As Prices Surge 5%

The US economy’s rebound from the pandemic is driving the biggest surge in inflation in nearly 13 years, with consumer prices rising in May by 5.0% from a year ago. The Labor Department said last month’s increase in the consumer price index was the largest since August 2008 when the reading rose 5.4%.

The core price index, which excludes the often-volatile categories of food and energy, jumped 3.8% in May from the year before – the largest increase for that reading since June 1992 (29 years). Energy prices and transportation costs increased the most of any categories (see below). 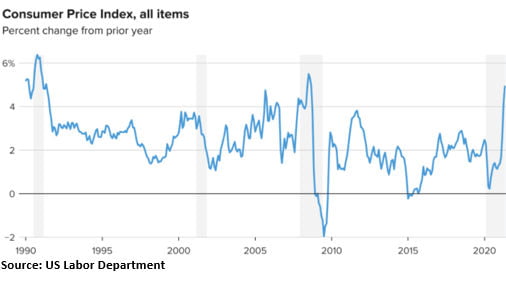 Consumers are seeing higher prices for many of their purchases, particularly big-ticket items such as vehicles. Prices for used cars and trucks leapt 7.3% from the previous month, driving one-third of the rise in the overall inflation index.

Prices for new vehicles have also soared because a severe computer chip shortage has crimped car production significantly. That, in turn, has bolstered prices for used autos. Rental car prices have soared because companies sold off their fleets when demand collapsed along with travel during the pandemic. Airfares and hotel room rates are also soaring as consumers start traveling again.

May’s jump in prices extends a trend which accelerated this spring amid widespread Covid-19 vaccinations, relaxed business restrictions, trillions of dollars in federal pandemic relief programs and ample household savings – all of which have stoked demand for Americans to spend and travel more.

Overall prices jumped at a 9.7% annualized rate over the three months ended in May. Worst of all, no one knows for sure when this trend will reverse. As I wrote on May 4, inflation sometimes has a mind of its own, and this may be one of them. Let’s hope the Fed knows what it’s doing.

The annual inflation measurements are being overly boosted by comparisons with figures from last year during pandemic-related lockdowns, when prices plummeted because of collapsing demand for many goods and services. This so-called “base effect” is expected to push up inflation readings significantly again for June but are expected to dwindle into the fall.

Though the inflation readings are well above anything seen since the 2008-09 financial crisis, the Federal Reserve has been largely dismissive of the numbers. Central bank officials believe the current rise is due to temporary factors which will abate as the year goes on. Let’s hope so!

Consequently, market participants generally do not expect to see the Fed react to the latest numbers when the policymaking Federal Open Market Committee meets today and tomorrow. It is once again widely expected to leave the Fed Funds rate near zero, although some Fed-watchers believe there may be some initial discussion about when the central bank should start reducing its monthly purchases of Treasury bonds and mortgage-backed securities.

While I’m on the subject of the Fed, there is a growing debate over whether President Biden will reappoint Chairman Jerome Powell for another four-year term early next year. Few things matter more to the success of President Biden’s administration than overall employment and inflation, and few institutions influence those more than the Federal Reserve.

Which is why so much is riding on whether Mr. Biden decides in coming months to reappoint or replace Mr. Powell, whose four-year term expires next February. Presidents going back to Ronald Reagan reappointed chairmen installed by their predecessors, nurturing the institution’s reputation for nonpartisan independence. However, President Trump broke that tradition by replacing Chairwoman Janet Yellen, a Democrat, after a single term, with Mr. Powell who is a Republican.

Some on the left would like Mr. Biden to do the same and replace Mr. Powell with someone, preferably not a white man, more vocal about addressing racial disparities, combating climate change and regulating banks more tightly. Is that really what we want the Fed Chairman doing?

I don’t have any insight on whether Biden will keep Powell on for another term or fire him, but I will not be surprised if he chooses to replace him with a Democrat, just because he can. Markets will react accordingly, depending on who the president chooses. So far, I have not heard any names floated as a possible replacement.

The Supreme Court Seriously Reins in the IRS – Good!

Last month, the Supreme Court handed down a key ruling in a little-known case that nonetheless will have a significant impact on the Internal Revenue Service (IRS), which has grown increasingly dismissive of the rules and procedures it’s meant to follow. Since this ruling has received almost no coverage by the press, I wanted to bring it to your attention.

The case, CIC Services v. Internal Revenue Service, didn’t make headline news but dealt overzealous tax collectors a unanimous loss before the highest court in the land. The case concerned reporting requirements imposed by the IRS under Notice 2016-66, regarding certain insurance transactions and others. These reporting requirements were substantial, threatening to add to the massive economic cost of complying with the tax code already faced by taxpayers.

Yet despite the burdens it was imposing under Notice 2016-66, the IRS simply decided to impose them unilaterally, bypassing the “notice-and-comment” procedures every government agency is required to follow under the Administrative Procedure Act (APA). One company impacted by the notice, CIC Services, chose to challenge the regulation for not complying with the APA.

If you’re wondering how the IRS thought it could get away with such a blatant disregard for its legal obligations, it’s because of the IRS’s interpretation of the Anti-Injunction Act (AIA). The AIA, in essence, requires taxpayers to pay a tax assessment before they could challenge it in court. The purpose of this standard is to prevent taxpayers from filing lawsuits challenging tax collections with the intent of delaying the payment of the tax assessment.

The IRS believed it could extend this to reporting requirements it issued, even when those requirements were imposed in an administratively improper manner. The IRS even got the trial judge and an appeals court to buy its argument that the AIA prevented the CIC Services case from even being heard.

The Supreme Court, however, unanimously rejected the IRS’s argument. The Court agreed the IRS’s position would leave taxpayers in a “heads I win, tails you lose” situation, whereby they had to first pay the large fines and risk imprisonment for failure to comply with Notice 2016-66 before challenging its legality. Such a situation would effectively render the IRS immune to any obligation to follow the law.

For years, governments have hidden behind the AIA and routinely claimed that taxpayers cannot challenge a law or a regulation if the result might be reduced revenue to the government. No longer! While the Supreme Court didn’t remove all obstacles to taxpayer challenges to unfair or illegal tax enactments, the justices made clear when the AIA doesn’t confer the total immunity the IRS claims it does.

With the High Court’s decision in CIC Services, Notice 2016-66 is likely doomed, as it blatantly violated the APA. That is also a big achievement, since the IRS has long refused to comply with the APA. Now that judges can throw out IRS notices and regulations which don’t go through the proper process, we’ve taken a big first step towards making the IRS more accountable to taxpayers.

Wishing you all the best,

Consumer Price Index Up 5% May, Highest in 13 Years