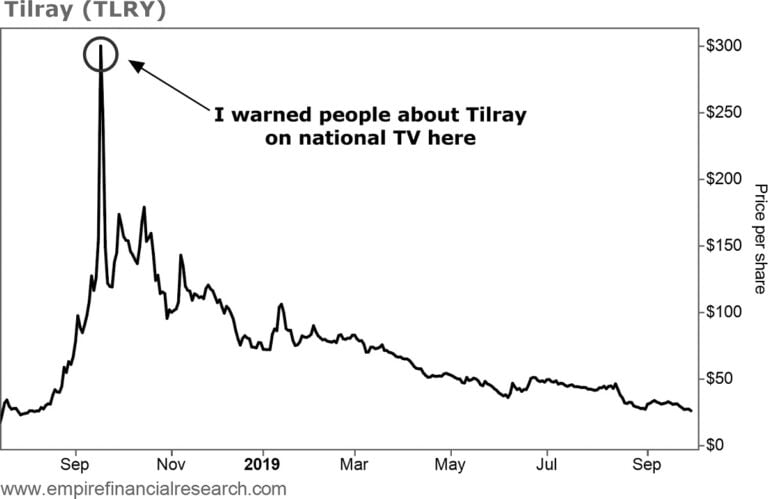 1) Like everyone else who follows the markets, I can't tear my eyes away from the stock of video-game retailer GameStop (GME), which in recent weeks has been on one of the wildest rides I've ever seen...

Lots of retail investors have made a fortune, while professionals have gotten clobbered. To wit, one of the largest hedge funds in the world, Gabe Plotkin's Melvin Capital Management – which started the year with $12.5 billion under management – suffered losses of 30% in the first 15 trading days of this year thanks to its short book (which of course included GameStop)... forcing it to do an emergency $2.75 billion capital raise yesterday, according to this Wall Street Journal article: Citadel, Point72 to Invest $2.75 Billion Into Melvin Capital Management. Excerpt:

Citadel and Point72 Asset Management are investing $2.75 billion into hedge fund Melvin Capital Management, which has been hard hit by a series of short bets to start the year.

The influx of cash is expected to help stabilize Melvin, which in 2021 has lost 30% through Friday, said people familiar with the firm. Melvin started the year with $12.5 billion and had been one of the best performing hedge funds on Wall Street in recent years. The losses stem from Melvin's array of short bets against companies and have stunned clients and other traders. Among other short positions, Melvin bet against the surging stock of videogame retailer GameStop.

2) Here's the first post I was able to find about the GameStop short squeeze, which was posted on the WallStreetBets forum on Reddit by user "Jeffamazon" four months ago: The REAL Greatest Short Burn of the Century. Excerpt:

Sup gamblers. Feel bad about missing the gain train on Tesla (TSLA)? Fear not – something much greater and stupider is here.

You know Citadel? The MM [market maker] that took all our money today? Well now we finally won't be at the mercy of the MMs. Instead, we're going to temporarily join forces with the Galactic Empire and hijack the death star.

Huh?? Isn't GME an absolute piece of trash stock? NO (will explain below), and even if it is, it's not entirely relevant. The this turn around is going to make TSLA's short burn look like warm afternoon tea.

Why? Well, most short squeezes are mostly math. This one is special because we have math AND great underlying news.

To be clear, this will happen whether or not we participate. I prefer us idiots to be a part of history. Here's what's up:...

Once the squeeze takes off, not even Citadel will be able to stop it. In any case, if they do start to buy puts, we can sell the puts as a bonus.

Like /u/dlkdev once said, the only way to beat a rigged game is to rig it even harder.

This is not fraud. There is no manipulation here. We aren't forcing anyone to do anything. It's going to happen with or without us. But I want to ride.

Earnings will light the match, but we can add all sorts of gasoline to the fire...

GME is TSLA one year ago. GME is AAPL in 2017. Add to that the greatest short burn you'll see in history, and you're in for a hell of a show.

4) My friend Andrew Left of Citron Capital, who was up 155% last year, was publicly short GameStop, so I called him last night to ask for his thoughts. He had plenty – and gave me permission to share them:

The market has come to its lowest form. This is even crazier than Tilray (TLRY) [see below] and Tesla (TSLA). The Reddit crowd apparently said, "Let's find a company that's completely dead – and because everyone knows that, there's a big short interest – and engineer a short squeeze."

There's not a five-year-old in the country who can kick my ass... but 1,000 of them probably could. That's what happened here.

Even so, my losses have been minimal – and I'm making it back by selling ridiculously priced calls. For example, when the stock was at $75 today, I was getting paid $18 for $90 strike calls and $14 for at-the-money calls that expire on Friday! If you're a professional player, you adjust to the market to make money off it.

There's no "there, there." GameStop is toast. If they're smart, they'll do an equity offering, but then they'll continue puking quarter and quarter and the Reddit traders will move on. They're already saying, "What's the next one we're going to go after?" They are so crazy they wouldn't buy a stock that would make them 40% in a year. I'll bet most of them aren't even aware that they're going to have to pay taxes on their 2020 gains on April 15.

I've never been more bearish on the market than I am right now because of foolishness like this. The market today is a total get-rich-quick scheme. The lunatics are running the asylum.

I don't know how it ends, but it's not sustainable. The frenzy, the gang mentality, if you say anything negative, they go crazy on you, posting their trade tickets and bragging about their winnings... It's nutty.

5)  I think Andrew is right that there's a lot of foolishness in the market, but I'm not ready to call a top yet. When I look at the biggest stocks that make up the bulk of the S&P 500 Index, I see high – but not bubble-level – valuations (with the possible exception of Tesla).

GameStop vs Tilray: A Comparison

6) Some are calling GameStop a once-in-a-generation short squeeze, but something similar happened in the case of pot stock Tilray just over two years ago. The cannabis sector was red-hot, and Tilray was the hottest stock in it. It had gone absolutely parabolic.

My cousin, a fireman out in eastern Washington near Yakima – who had almost no investing experience – confessed to me that he owned it.

I slapped my forehead.

"What are you doing?!" I nearly shouted at him.

At the time, I had never even heard of the company. But I did some research on it and saw that it was trading at 500 times revenues.

It was clearly a ridiculous bubble, and I said so in one of my daily e-mails.

A producer at Yahoo Finance saw it and invited me to come in for a TV interview. That very afternoon, as I was going down to Yahoo's studios, TLRY shares spiked to $300. It was trading at 1,000 times revenue and had a $30 billion market cap!

And here was a clincher... As I was walking from the subway into the studios, my then 19-year-old daughter, a sophomore in college, called me.

Despite years of attempts, I had never been able to interest her in the stock market. At one point, I even set up a $5,000 account for her so she could learn about investing by buying a few stocks of stores that she shopped at or services that she used. It was all to no avail...

So I had to chuckle when she said, "Daddy, I'm taking an investing class. We each have a model portfolio with $25,000 to invest. My friend told me to buy Tilray, so I did. And now it's up a lot. What should I do?"

At that point, I knew with certainty that the stock had to be at a top.

"Sell it immediately!" I said. And she did, banking a solid profit (on paper of course).

I went on television minutes later, shared this story, and concluded: "Folks, my daughter – truly the world's most clueless investor – just bought her first stock, Tilray, based on one of her friend's stock tips. I cannot think of a better sign that it's peaked."

I predicted that the stock would fall to less than $100 within a month and would be down 90% within a year. Sure enough, that's exactly what it did, as you can see in this chart (it ultimately ended up declining by more than 99%!)... 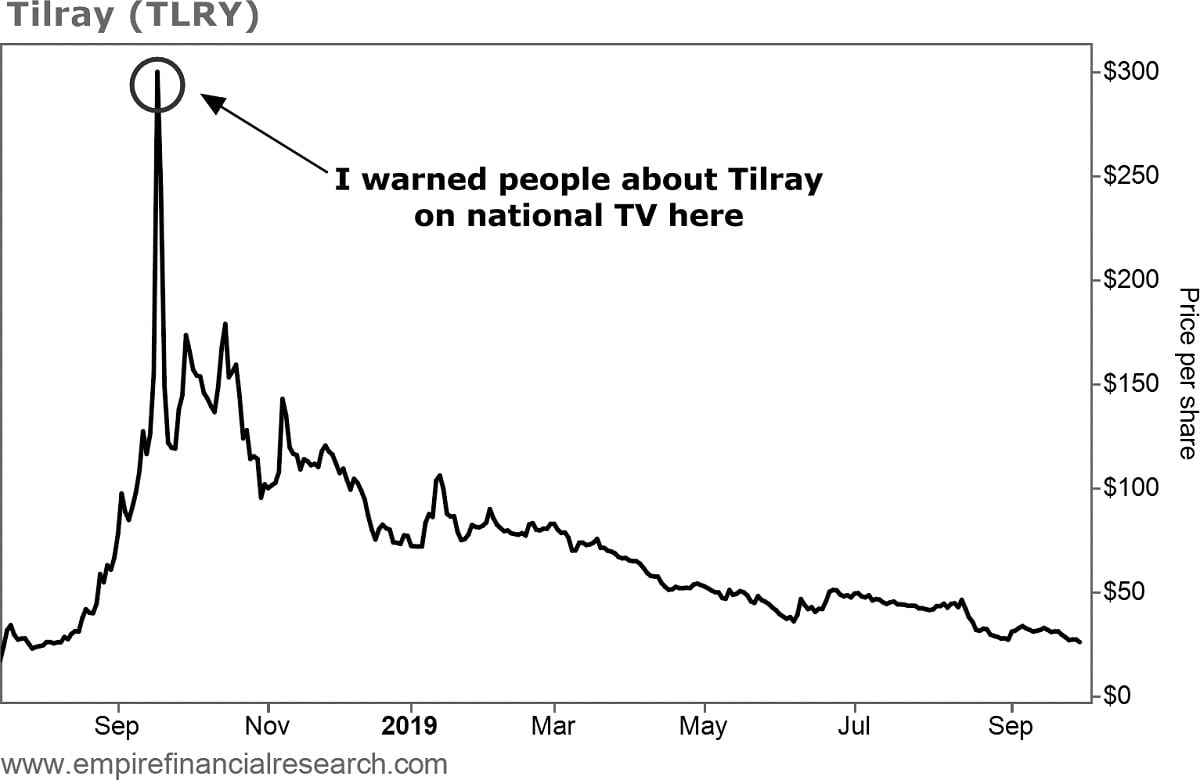 Given my success in identifying the tops of certain bubbles, you might think that my advice is to buy these stocks or sectors, ride them up, and then sell (or, better yet, short) them at the top.

Not at all. I've gotten lucky a few times, but it's just too hard to do this consistently.

Rather, my advice is to simply avoid hot sectors and stocks altogether.

Look outside of what's popular. Do your own research, think independently, and look for an area of the market where you might have an edge – in the industry where you work, a company you know well, a store or restaurant that you frequent, etc. That's where you might discover something that other investors are missing.

P.S. I'm going to stick my neck out and make the same prediction for GameStop that I did for Tilray: From yesterday's peak, it will be down by two-thirds within a month (less than $53.27 per share) and 90% within a year (less than $15.98 per share).