1) At age 97, investing legend Charlie Munger doesn't do much public speaking anymore. When he does, I always pay attention because I think he's not only one of the world's greatest investors but also thinkers/philosophers. One of the highest honors of my life was being a contributor to the definitive book about him, Poor Charlie's Almanack: The Wit and Wisdom of Charles T. Munger.

He did a wide-ranging interview on Friday for the Sohn Hearts & Minds Investment Conference in Australia, and he didn't disappoint. The video isn't available, but here are some of the highlights of what he said, courtesy of The Australian Financial Review:

I generally agree with Munger's comments, though I don't think the speculative frenzy today equals that of the Internet bubble at its peak in March 2000. I think it's more like mid-1999 today, which is why I think the market still has room to run.

2) My friend Doug Kass of Seabreeze Partners shares Munger's skepticism of cryptocurrencies. He outlines the reasons why in this recent missive:

I still don't see the value proposition in digital currency.

Over the weekend, the price of many cryptocurrencies fell by almost 20%.

Bitcoin has now dropped by 38% from its recent high – that's the third correction of greater than 30% in the last 12 months.

Here is a history of the major corrections in bitcoin over the last 11 years: 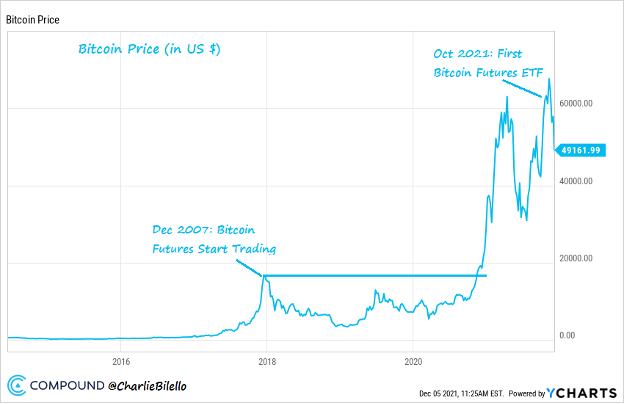 Mark Twain taught us that history doesn't repeat itself, but it often rhymes.

The same applies to market history. 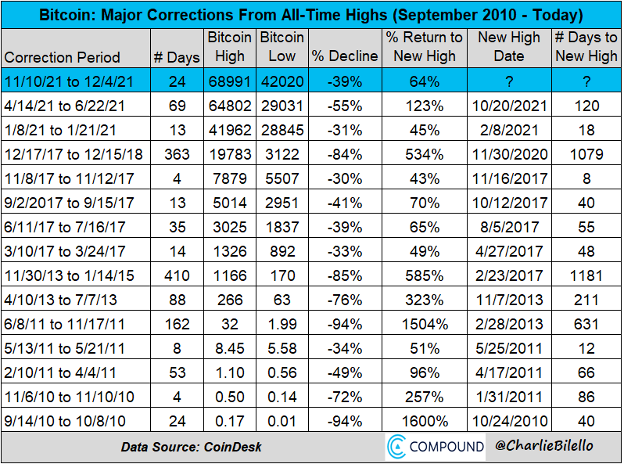 What are digital currencies, if they can be created ad hoc – like monetary presses – and produce an endless supply?

Why are digital currencies better than fiat currency if their supply is really not fixed?

What value do digital currencies have if:

I recognize that many very intelligent investors that I respect (like Paul Tudor Jones, Elon Musk, Anthony Scaramucci) and even some countries have confidently made large commitments to digital currencies.

I am not a luddite, but, sorry, I just don't "get" digital currencies, and I don't see the value proposition.

For several years cryptocurrencies have taken the oxygen out of the gold room – and many long-term and strongly committed investors in precious metals have begun to lose confidence in gold and silver.

Gold has been around, through thick and thin, for thousands of years.

Bitcoin is only 13 years old, and other digital currencies are still infants.

But we don't know what bitcoin and other digital currencies will look like when they grow up.

There... I have said that also.

Given how bearish I've been about cryptocurrencies – calling them "a techno-libertarian pump-and-dump scheme" and nailing the December 2017 bitcoin top to the hour – I wanted to share with all of my readers an excerpt of what I wrote in last month's edition of our flagship Empire Stock Investor newsletter entitled "The Most Unexpected Recommendation in Empire Financial Research History":

I think [my colleague] Enrique [Abeyta] is right that at least some forms of digital assets will have real – and growing – value. In particular, you may be surprised to learn that my views on certain cryptocurrencies ("cryptos") have evolved since I called the previous top of bitcoin in late 2017.

It comes back to the Rembrandt analogy. While one of these works of art can't be valued based on any known valuation formula and is therefore definitionally a speculation (evaluated solely as an investment), it clearly has value because, over time, many people have been willing to pay ever-increasing prices for these artistic masterpieces.

In other words, if a large number of people believe something has value – and are willing to pay cold, hard cash for it – then it has value, regardless of whether it produces cash flow.

So where do cryptos fall on this spectrum?

I don't know for sure... Most, no doubt, will end up worthless. But it's also become clear to me that some – bitcoin and a few others – have reached a critical mass in which enough people believe in them that their values are more likely to go up than down.

That's why – despite my previous skepticism – we're recommending our favorite cryptocurrency in this month's issue of Empire Stock Investor. Yes, it's a speculation (so size it accordingly!), but we think it's a good speculation...

For more on this, see the e-mail I sent out on May 12: A Major Change to My Investing Philosophy.