Whitney Tilson’s email to investors discussing Tilray is going lower, but he is bullish on the cannabis sector; our event on Thursday; his take on Warren Buffett’s annual letter.

After collapsing 99% from an intraday peak of $300 in September 2018, TLRY shares rose from the dead to spike as high as $67 a few weeks ago before crashing again – closing yesterday at $25.56. Look at this crazy stock chart since the company's initial public offering ("IPO"): 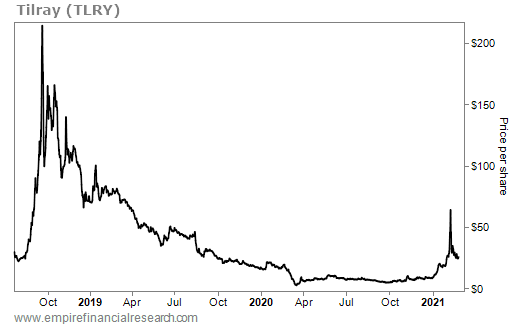 I think Tilray's stock is going a lot lower, but that doesn't mean I'm bearish on all pot stocks. In fact, I've turned bullish on the sector thanks to a compelling analysis by my friend Tom Carroll, who writes the Cannabis Capitalist newsletter for our sister company Stansberry Research. He believes that investment opportunities are beginning to emerge that are very real this time around... and investors could reap immense gains if they play it right.

To hear Tom's thinking, tune into the free event he and I are hosting on Thursday night at 8 p.m. Eastern time. During the event, he'll share the four reasons why he believes the sector is at an important inflection point and how certain stocks are likely poised to benefit the most (none of them are the hottest, most richly valued ones like Tilray). Best of all, Tom will be sharing the name of one just for tuning in.

Again, it's free to attend... but you must register in advance, so please do so here. See you on Thursday!

2) Berkshire Hathaway (BRK-B) CEO Warren Buffett released his much-anticipated annual letter on Saturday. In yesterday's e-mail, I focused on what he said (and did) regarding share repurchases, so today I'd like to highlight some of the other topics he covered (and didn't cover).

Some commentators were disappointed that Buffett didn't wade into the hottest topics of the day – such as income inequality, the COVID-19 pandemic, speculating retail investors on Reddit, and bitcoin (see: Buffett's 'Tone Deaf' Annual Letter Skirts Major Controversies and Warren Buffett Won't Take the Reddit Bait).

But I was neither surprised nor disappointed. Buffett has made clear his views on many of these topics already (for example, saying bitcoin is "probably rat poison squared"... And Charlie Munger also had plenty to say at last week's Daily Journal (DJCO) annual meeting, which I covered here), so I was glad Buffett focused on Berkshire Hathaway, its business, and future prospects.

However, there's one topic I wish he had addressed (as I mentioned in my interview with Yahoo Finance yesterday): why he didn't aggressively put cash to work – either buying his own stock, which dipped as low as $240,000 per A-share, or other ones – during the market crash last March. After all, in his 2016 annual letter he wrote:

Charlie and I have no magic plan to add earnings except to dream big and to be prepared mentally and financially to act fast when opportunities present themselves. Every decade or so, dark clouds will fill the economic skies, and they will briefly rain gold. When downpours of that sort occur, it's imperative that we rush outdoors carrying washtubs, not teaspoons. And that we will do.

Well, dark clouds did indeed fill the economic skies and it briefly rained gold last spring, yet Buffett failed to take advantage. In fact, he was a net seller of stocks (to the tune of $8.6 billion) in 2020. I would have been interested in hearing his thoughts about why he didn't act and whether he views this as a mistake.

But other than that minor quibble, I enjoyed Buffett's letter. Here were the highlights for me...

And bonds are not the place to be these days. Can you believe that the income recently available from a 10-year U.S. Treasury bond – the yield was 0.93% at year-end – had fallen 94% from the 15.8% yield available in September 1981? In certain large and important countries, such as Germany and Japan, investors earn a negative return on trillions of dollars of sovereign debt. Fixed-income investors worldwide – whether pension funds, insurance companies or retirees – face a bleak future.

Some insurers, as well as other bond investors, may try to juice the pathetic returns now available by shifting their purchases to obligations backed by shaky borrowers. Risky loans, however, are not the answer to inadequate interest rates. Three decades ago, the once-mighty savings and loan industry destroyed itself, partly by ignoring that maxim.

Berkshire now enjoys $138 billion of insurance "float" – funds that do not belong to us, but are nevertheless ours to deploy, whether in bonds, stocks or cash equivalents such as U.S. Treasury bills. Float has some similarities to bank deposits: cash flows in and out daily to insurers, with the total they hold changing very little. The massive sum held by Berkshire is likely to remain near its present level for many years and, on a cumulative basis, has been costless to us. That happy result, of course, could change – but, over time, I like our odds.

This chart shows the astonishing growth of Berkshire's float over the past quarter century: 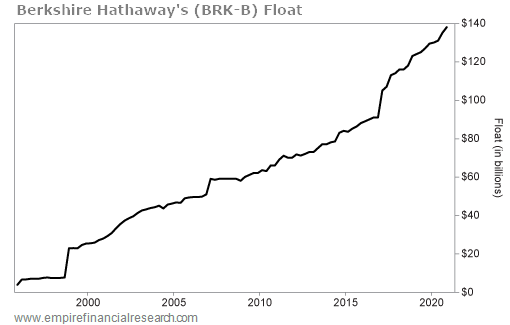 Recently, I learned a fact about our company that I had never suspected: Berkshire owns American-based property, plant, and equipment – the sort of assets that make up the "business infrastructure" of our country – with a GAAP valuation exceeding the amount owned by any other U.S. company. Berkshire's depreciated cost of these domestic "fixed assets" is $154 billion. Next in line on this list is AT&T, with property, plant, and equipment of $127 billion.

Our leadership in fixed-asset ownership, I should add, does not, in itself, signal an investment triumph. The best results occur at companies that require minimal assets to conduct high-margin businesses – and offer goods or services that will expand their sales volume with only minor needs for additional capital. We, in fact, own a few of these exceptional businesses, but they are relatively small and, at best, grow slowly.

Asset-heavy companies, however, can be good investments. Indeed, we are delighted with our two giants – BNSF and BHE: In 2011, Berkshire's first full year of BNSF ownership, the two companies had combined earnings of $4.2 billion. In 2020, a tough year for many businesses, the pair earned $8.3 billion.

BNSF and BHE will require major capital expenditures for decades to come. The good news is that both are likely to deliver appropriate returns on the incremental investment.

We began buying Apple stock late in 2016 and by early July 2018, owned slightly more than one billion Apple shares (split-adjusted). Saying that, I'm referencing the investment held in Berkshire's general account and am excluding a very small and separately-managed holding of Apple shares that was subsequently sold.

When we finished our purchases in mid-2018, Berkshire's general account owned 5.2% of Apple. Our cost for that stake was $36 billion. Since then, we have both enjoyed regular dividends, averaging about $775 million annually, and have also – in 2020 – pocketed an additional $11 billion by selling a small portion of our position.

Despite that sale – voila! – Berkshire now owns 5.4% of Apple. That increase was costless to us, coming about because Apple has continuously repurchased its shares, thereby substantially shrinking the number it now has outstanding.

As of year-end 2020, Berkshire's stake in Apple was worth $120 billion – yet only cost $31 billion. Think about that the next time someone says that Buffett has lost his edge... (You might also mention Buffett's $232 million investment in Chinese battery and electric-vehicle maker BYD (1211.HK), which at year-end was worth $5.9 billion – a cool 25-bagger!)

Success stories abound throughout America. Since our country's birth, individuals with an idea, ambition and often just a pittance of capital have succeeded beyond their dreams by creating something new or by improving the customer's experience with something old.

Charlie and I journeyed throughout the nation to join with many of these individuals or their families...

Today, with much of finance, media, government, and tech located in coastal areas, it's easy to overlook the many miracles occurring in middle America. Let's focus on two communities that provide stunning illustrations of the talent and ambition existing throughout our country.

You will not be surprised that I begin with Omaha...

A post-script to this story says it all: When Mrs. B's large family gathered for holiday meals, she always asked that they sing a song before eating. Her selection never varied: Irving Berlin's "God Bless America"...

When you next fly over Knoxville or Omaha, tip your hat to the Claytons, Haslams, and Blumkins as well as to the army of successful entrepreneurs who populate every part of our country. These builders needed America's framework for prosperity – a unique experiment when it was crafted in 1789 – to achieve their potential. In turn, America needed citizens like Jim C., Jim H., Mrs. B, and Louie to accomplish the miracles our founding fathers sought.

Today, many people forge similar miracles throughout the world, creating a spread of prosperity that benefits all of humanity. In its brief 232 years of existence, however, there has been no incubator for unleashing human potential like America. Despite some severe interruptions, our country's economic progress has been breathtaking.

Beyond that, we retain our constitutional aspiration of becoming "a more perfect union." Progress on that front has been slow, uneven and often discouraging. We have, however, moved forward and will continue to do so.

I couldn't have said it better myself!