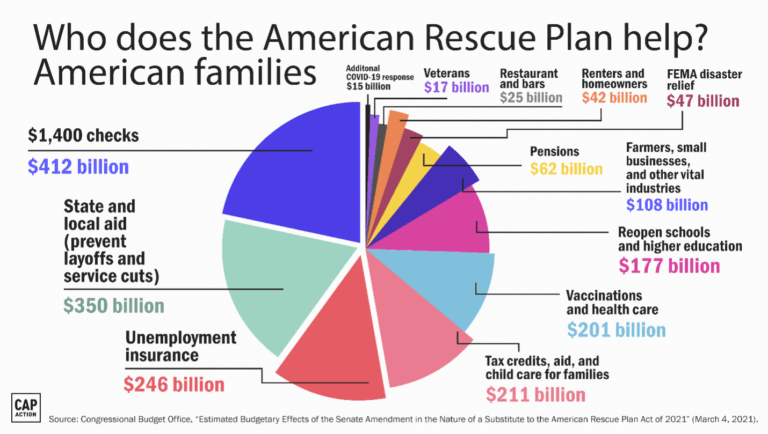 A Year Into Crisis, Billionaires Could Pay For 2/3 Of Biden’s American Rescue Plan With Their Coronavirus Pandemic Profits

WASHINGTON – One year, 530,000 deaths, 29 million cases, and 78 million lost jobs into the COVID-19 crisis, America’s billionaires have made so much money they could fund two-thirds of President Biden’s American Rescue Plan (ARP) just with their pandemic profits. As the President plans to address the nation tonight on the first anniversary of the pandemic, many suffering Americans would be shocked to learn what a different year it’s been for the richest of the rich.

Using the jump in their wealth since last March, three men alone—Jeff Bezos, Elon Musk and Mark Zuckerberg - could foot the nearly $250 billion cost for supplemental unemployment benefits contained in the ARP that will pay millions of jobless Americans $300 a week for the next six months. [Below see a chart of ARP’s components and a table of the top 15 billionaires.]

The collective net worth of the nation’s 657 billionaires stood at $4.2 trillion as of Wednesday morning, March 10, 2021—up $1.3 trillion, or 44%, since the pandemic recession began about a year ago— based on Forbes data compiled in this report by Americans for Tax Fairness (ATF) and the Institute for Policy Studies (IPS). The combined fortune of the nation’s billionaires was just under $3 trillion on March 18, 2020, the rough start of the pandemic crisis.

This billionaire wealth growth represents two-thirds of the $1.9 trillion cost of Biden’s pandemic rescue plan, which has been attacked by the GOP as too expensive. No Republican voted for the measure as it made its way through Congress.

“It’s been a full year now of illness, unemployment, and insecurity for tens of millions of Americans—but 12 months of incredible wealth growth for the nation’s billionaires,” said Frank Clemente, executive director of Americans for Tax Fairness. “President Biden and Democrats in Congress came to the rescue with a major plan that benefits working families. Now they need to turn their attention to a bold long-term jobs and investment plan that also reforms the tax code so the wealthy and corporations start paying their fair share and everyone can benefit.”

“These obscene gains of wealth during a pandemic prove that our economy is clearly designed for billionaires to profit, while millions suffer," said Chuck Collins, director of the Program on

Inequality at IPS, and author of the forthcoming book, "The Wealth Hoarders: How Billionaires Pay Millions to Hide Trillions.” “The relief package will ease some of the suffering, but it is temporary. We also need to permanently address the underlying economic conditions that the pandemic exposed.”

There are other startling matchups of the pandemic wealth growth of individual U.S. billionaires and components of Biden’s rescue plan meant to help millions of Americans cast into crisis by the virus.

The ARP contains many forms of pandemic relief, including $1,400 payments for 60% of  Americans. The $1.3 trillion wealth gain by U.S. billionaires since March 2020 could pay for a stimulus check of more than $3,900 for every one of the roughly 331 million people in the United States. A family of four would receive over $15,600. Republicans in Congress resisted sending families stimulus checks most of last year, claiming we could not afford them. 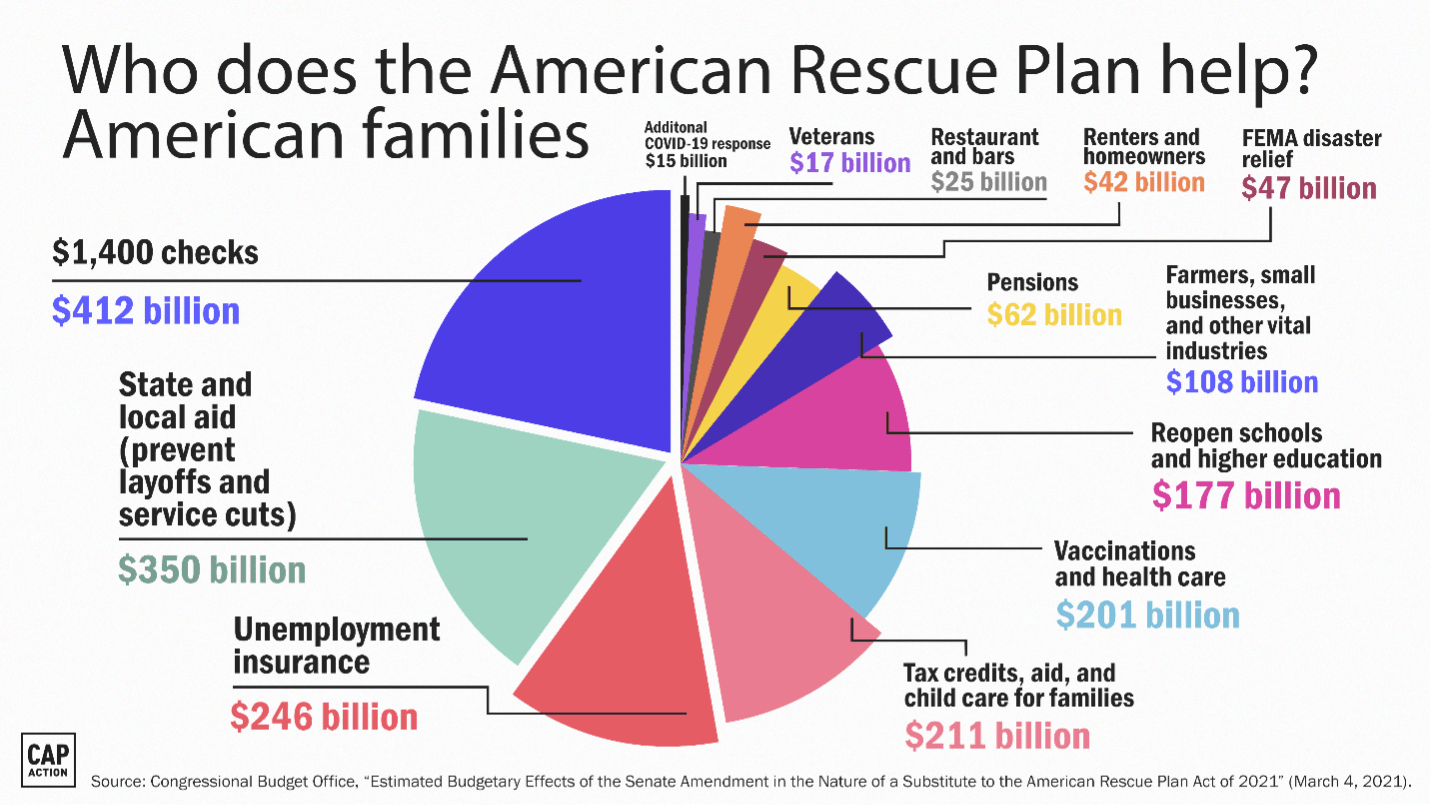 Under current tax law, none of the billionaires’ $4.2 trillion in wealth will be taxed during their lifetimes, unless the underlying assets are sold at a gain. Thanks to a weakened estate tax and aggressive estate-tax dodging by the rich, much of the money will also escape taxation when passed onto the next generation.

Sen. Elizabeth Warren and colleagues in the House have introduced the “Ultra-Millionaire Tax Act” to reap some revenue from huge fortunes that otherwise sit untaxed year after year. The tax rate would just be two cents on the dollar (2%) for people with wealth between $50 million and $1 billion and just three cents on the dollar (a total of 3%) for wealth above $1 billion. According to an ATF and IPS analysis of Forbes data, America’s billionaires alone would owe $114 billion for last year if Warren’s wealth tax had been in place and $1.4 trillion over 10 years. The law would raise a total of about $3 trillion over 10 years.

Taxing some of the towering wealth of billionaires would be the diametric opposite of the last overhaul of the U.S. tax code, 2017’s Trump-GOP tax cuts. Those tax cuts, which coincidentally cost the same estimated $1.9 trillion over 10 years as Biden’s American rescue plan, mostly benefitted the wealthy and corporations—very much including billionaires and the businesses they control. According to the Tax Policy Center, 65% of the TCJA’s benefits will go to the highest-income 20% of American households. By contrast, about 90% of the ARP’s benefits will go to the bottom 80% of households, with nearly a quarter (23%) going to the lowest-income fifth. 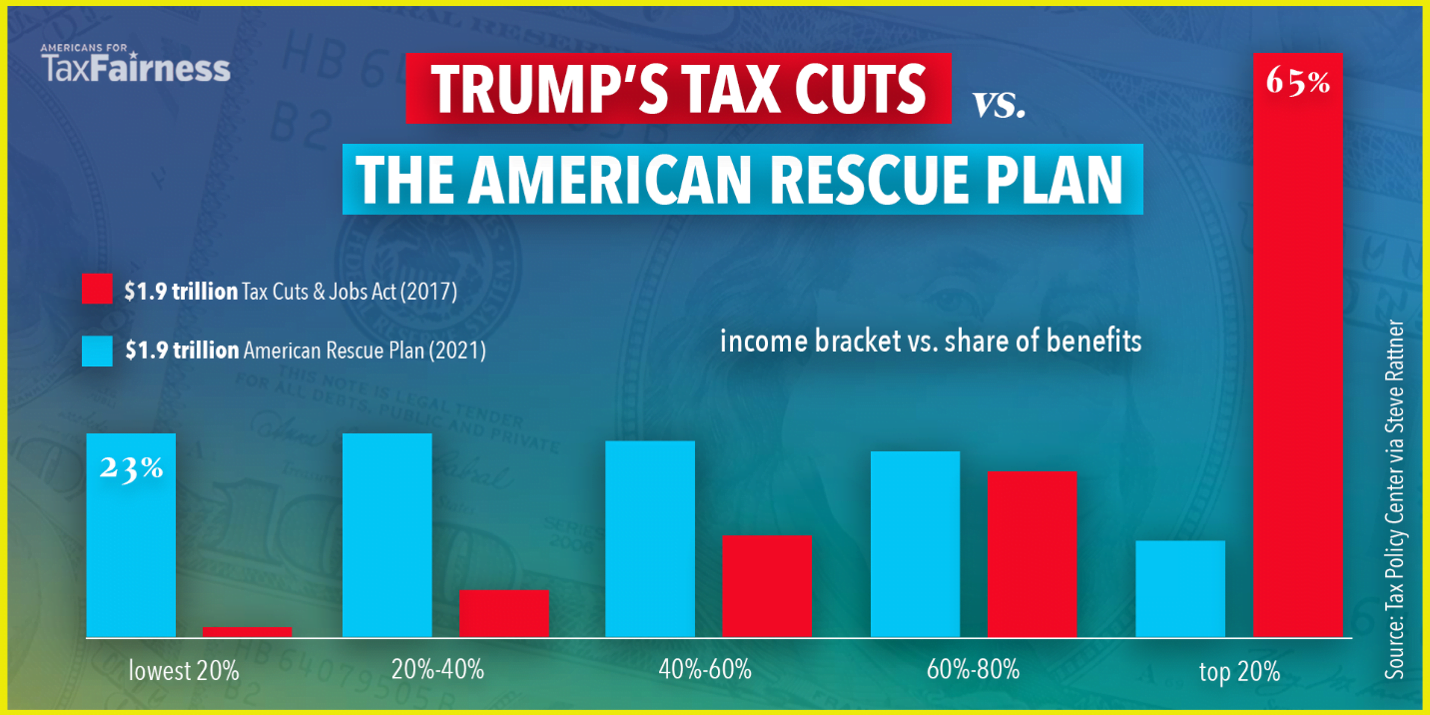 March 18 is used as the unofficial beginning of the crisis because by then most federal and state economic restrictions responding to the virus were in place. March 18 was also the date that Forbes picked to measure billionaire wealth for the 2020 edition of its annual billionaires report, which provided a baseline that ATF and IPS compare periodically with real-time data from the Forbes website. PolitiFact has favorably reviewed this methodology.

About ATF:  Americans for Tax Fairness is a diverse campaign of more than 420 national, state and local endorsing organizations united in support of a fair tax system that works for all Americans. It has come together based on the belief that the country needs comprehensive, progressive tax reform that results in greater revenue to meet our growing needs.

About IPS: The Institute for Policy Studies is a multi-issue research center that has conducted ground-breaking research on inequality for more than 20 years. The IPS Program on Inequality and the Common Good, and the Inequality.org website, provide research, advocacy and policy development on issues related to economic inequality.