ValueWalk
Home Business Are ExxonMobil And Chevron Planning A Merger? 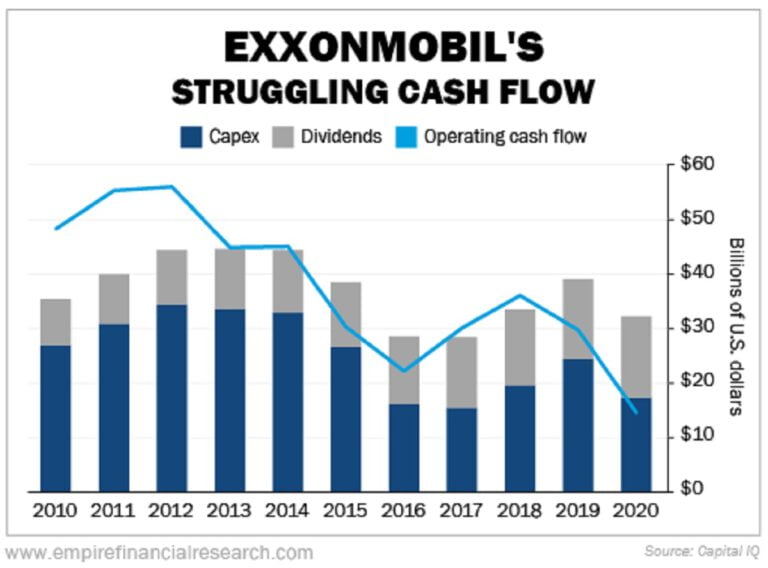 Whitney Tilson’s email to investors sharing his thoughts on a possible ExxonMobil-Chevron merger; suggested ‘terms of service agreement’ for the tech giants; Biden‘s nightmare may be China; here’s how Wall Street has always manipulated the markets.

1) Over the weekend, the Wall Street Journal reported that the CEOs of oil giants ExxonMobil (XOM) and Chevron (CVX) have discussed a merger.

As you can see in the chart below, both stocks have been dogs over the past five years. In a period in which the S&P 500 Index has almost doubled, Chevron is flat and ExxonMobil is down 40%:

I’m particularly bearish on ExxonMobil, for reasons I most recently outlined in my September 16 e-mail, where I concluded:

ExxonMobil’s stock is a classic value trap. Don’t be tempted by the high dividend yield (currently 9.6%) [now 7.8%] – the company doesn’t come within a country mile of generating the cash flow to cover it, so it will eventually be forced to cut it.

After updating the charts from that September e-mail with two more quarters of data, we can see that ExxonMobil’s operating cash flow over the past decade has deteriorated so much that it has gone from comfortably covering capital expenditures plus the dividend to not covering both to, in 2020, not even covering either!

How has ExxonMobil funded these deficits? By taking on more and more debt, as you can see in this chart:

The same charts for Chevron show weakness as well – but not nearly as bad as ExxonMobil. Here are the cash flows:

In conclusion, I’d avoid both ExxonMobil and Chevron stocks. As for a possible merger, I’m reminded of the old saying: “Two stones tied together still sink.”

Suggested ‘Terms Of Service Agreement’ For The Tech Giants

2) The tech giants’ seemingly arbitrary policies regarding content moderation and kicking certain people off their platforms have generated a great deal of controversy. I agree with this blurb that appeared in The Bulwark:

My buddy drafted the “Terms of Service” agreement he would use in the event he created a social network. Here they are:

This social network is like a party I’m throwing at my house, and you’re all invited. So here’s the deal. I’m not gonna write a whole list of rules on a chalkboard like I’m your third-grade substitute teacher. I don’t mind you being rowdy because this is a fun party in my house. But if you cross the line, I’ll kick you out on your ass. Where is the line? I’m not going to try to explain it to you, so just keep yourself in check so you don’t cross it.

But I’m not going to make any pretense here that I’m “fair” or “objective.” If I like you, I’ll probably let you get away with more. If I don’t like you but you’re still making the party cool, I’ll probably cut you some slack. You might get a warning, or you might not. Look, I’m partying too, and I don’t always have time to do warnings. Sometimes there will be a misunderstanding and I’ll kick you out when I should not have, and maybe I’ll regret it later. But probably not.

Biden’s Nightmare May Be China

3) Columnist Nicholas Kristof published a sobering op-ed in the New York Times earlier this week. One thing I know for sure: The markets aren’t pricing in a shooting war between the U.S. and China! Biden’s Nightmare May Be China. Excerpt:

“I think it’s unlikely that there’ll be a military confrontation there, but I don’t rule it out,” said Bonnie Glaser of the Center for Strategic and International Studies. That seems right to me – but I also worry that we’re wrong. Few expected Xi to pick fights with India on their shared border, as he has several times in the past year, and heaven help us if he is similarly reckless toward Taiwan and sparks a war with the United States.

Dealing with Mitch McConnell will be a piece of cake for President Biden compared with dealing with Xi. Biden’s challenge will be to constrain a Chinese leader who has been oppressive in Hong Kong, genocidal in the Xinjiang region, obdurate on trade, ruthless on human rights and insincere on everything, while still cooperating with China on issues like climate change, fentanyl, and North Korea (which many experts expect to resume missile launches this year). Oh, and we don’t have a China strategy.