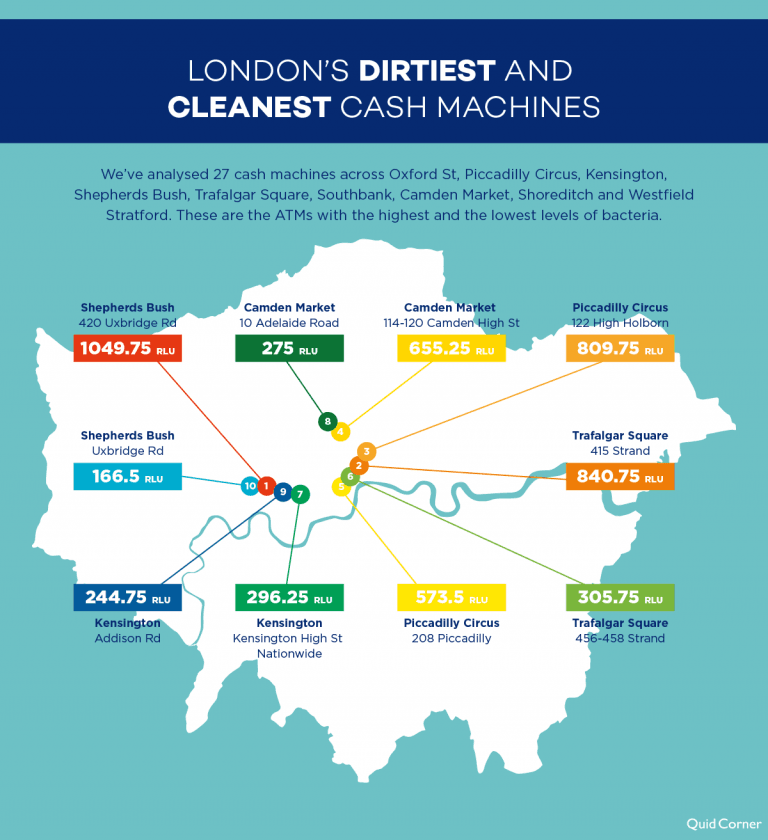 Money laundering is not the only “dirty” issue facing cash machine in the UK’s capital city.

The city of London is in a bit of a pickle at the moment. The beating heart (if not brain) of a nation that has voted to excise itself from the EU, the UK’s capital mostly voted against Brexit. It has been shown that Brexit is going to cost the UK a lot of money whatever happens (£8bn in preparations for a no-deal exit to start with, followed by £30bn losses if a deal is achieved and £60bn if it’s no-deal.)

For a select few Londoners, these figures sound just fine. The super-elite are either looking forward to the tax breaks of life outside the EU, or have boosted their fortunes by betting against the British pound.

So is London money dirty money? Well, it’s a crude metaphor for a crude subject. The team over at Quid Corner have focussed instead on the literal idea of dirty money in London: that is to say, the germs you can find on the capital’s automated teller machines!

The creatives behind this new data set/public health advisory sent an intrepid reporter out to swab a cross-section of cash machines in different boroughs around the city. He then ran the swabs through an RLU (relative light unit) reader called the SystemSURE Plus. This unglamorously science-fiction-type gadget measures light reflections to give an RLU score detailing the presence of adenosine triphosphate (ATP) in a sample. As a guidance, 10 RLU (or less) is considered a safe enough level to eat off or to perform surgery on, depending what kind of knife you’re holding.

The average London cash machine returned a score of 734 RLU for the keypad, and 640 RLU for the touchscreen. By comparison, a toilet seat may have around 891 RLU and the bottom of a shoe might be around 1967 RLU. (Yes, that same intrepid explorer swabbed these sources, too). The armrest on a train – you know, the kind germaphobes prefer to lay a handkerchief over before resting their bare skin – scores 148.

So we can say that yes, London money is pretty dirty (as long as you use cash – let’s not even go into what you might find with a chemical analysis of the average banker or Tory’s credit card!). But it is interesting to note that some parts of the cash machine are dirtier than others. Actually, the dispenser part that the cash actually comes out from is quite clean (286 RLU) – so it’s a shame your hands will be covered in germs by the time you pick it up. The keypad is the dirtiest part.

But while the ‘dirty money’ of profiteering from Brexit and the dramatic decline of the pound is certainly bad news for the British people (particularly the poorest and hardest working among them), bacteria-laden cash and ATMs are not necessarily something to worry about.

Bacteria are everywhere. They make the world go around. Many of them are actually good for you. In your belly, the right bacteria help food to digest. Children who are exposed to bacteria are at a lower risk of developing allergies. Good bacteria on your skin protects you from harmful bacteria. Coming into contact with bacteria in certain conditions boosts your immune system.

But since you don’t know just where the bacteria on London’s cash machines may have been, it’s best to play it safe by touching the surfaces as little as possible and carefully washing your hands with hot soapy water next time you’re near the appropriate amenities.

So, for the hygiene-minded, where are London’s cleanest and dirtiest cash machines? Well, the UK has over 70,000 ATMs, so it’s not surprising that Quid Corner’s intrepid explorer chose to swab a representative selection of London’s machines rather than every single filthy one. He discovered that one area wasn’t necessarily much cleaner than another, and that you sometimes only have to take a short walk from a dirty cash machine to find a relatively clean one. Unfortunately, without an RLU reader of your own (or Quid Corner’s map of dirty cash machines) you might have to go by what you see.

For example, the grubbiest machine they found was at 420 Uxbridge Road in Shepherd’s Bush, near Queens Park Rangers’ soccer stadium and the Empire music hall. Its keyboard had an RLU score of 1232. But the cleanest machine was just a quarter of a mile away, outside the Mother and Child Welfare Organisation on the same road. Is that because mothers and children work harder at keeping their hands clean than gig-goers and sports fans? Or is it because, thanks to Conservative government policies, the UK’s most hard-up families have relatively little cash to access?

The dirtiest area overall was Piccadilly Circus, better known as the ‘West End.’ Packed with tourists and party animals, the area’s cash machines are veritable zoos for bacteria with exotic germs from around the UK and the world playing happily together.

The cleanest area? Kensington. This posh, west-central town is part of Royal Borough of Kensington and Chelsea, one of London’s most affluent areas containing some of the most expensive houses in the world. It also has the highest income inequality in London. Perhaps you remember the Grenfell Tower fire in 2017, when 72 occupants of a high rise apartment building perished – apparently because developers cut corners to save money, insulating the building with flammable cladding. The fire brigade had warned the council of the danger two months earlier and nothing had been done. This was in North Kensington.

So London has some money trouble ahead, ‘no-deal’ Brexit or not – but it has very little to do with the bacteria on its dirtiest cash machines. 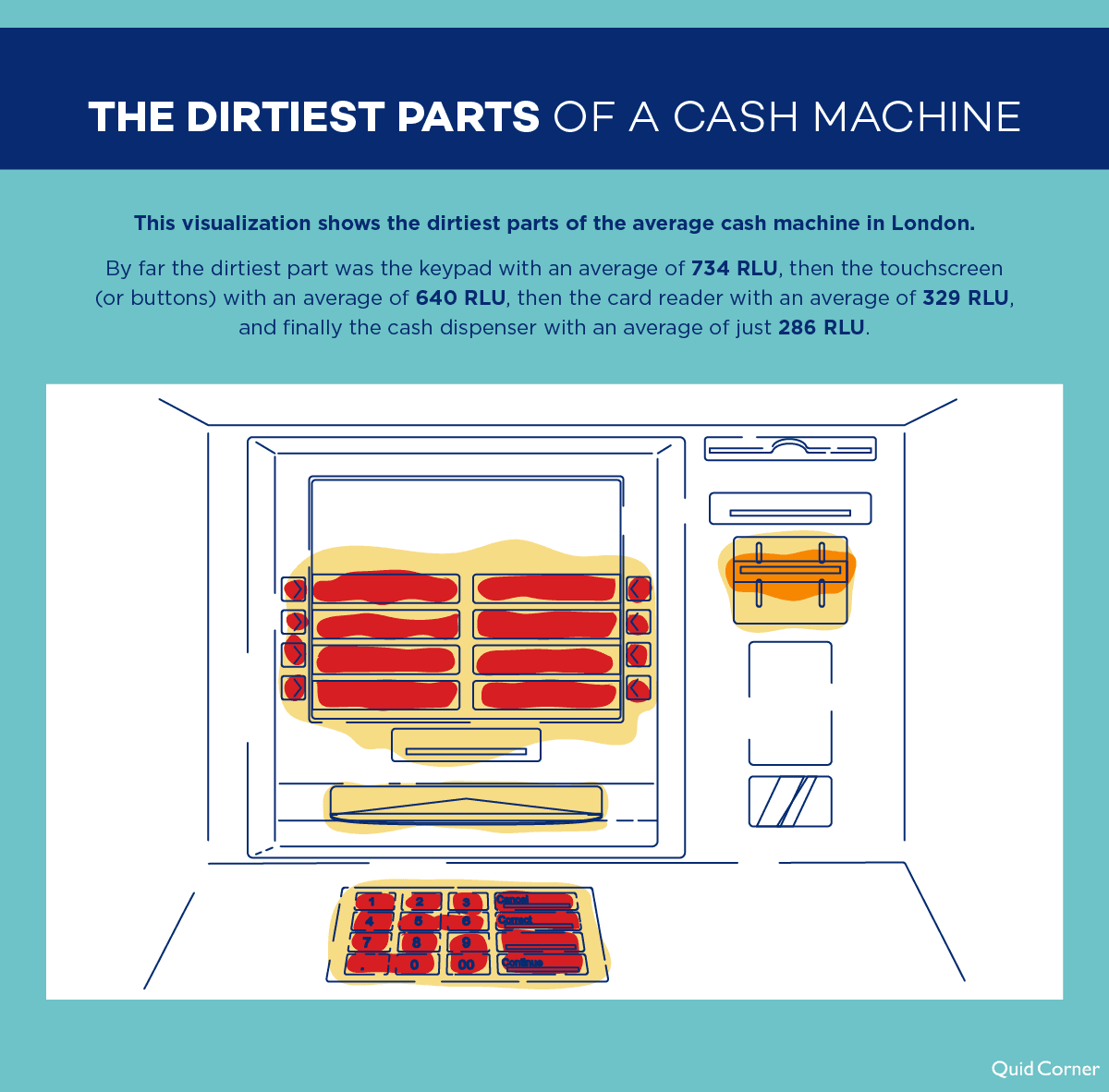 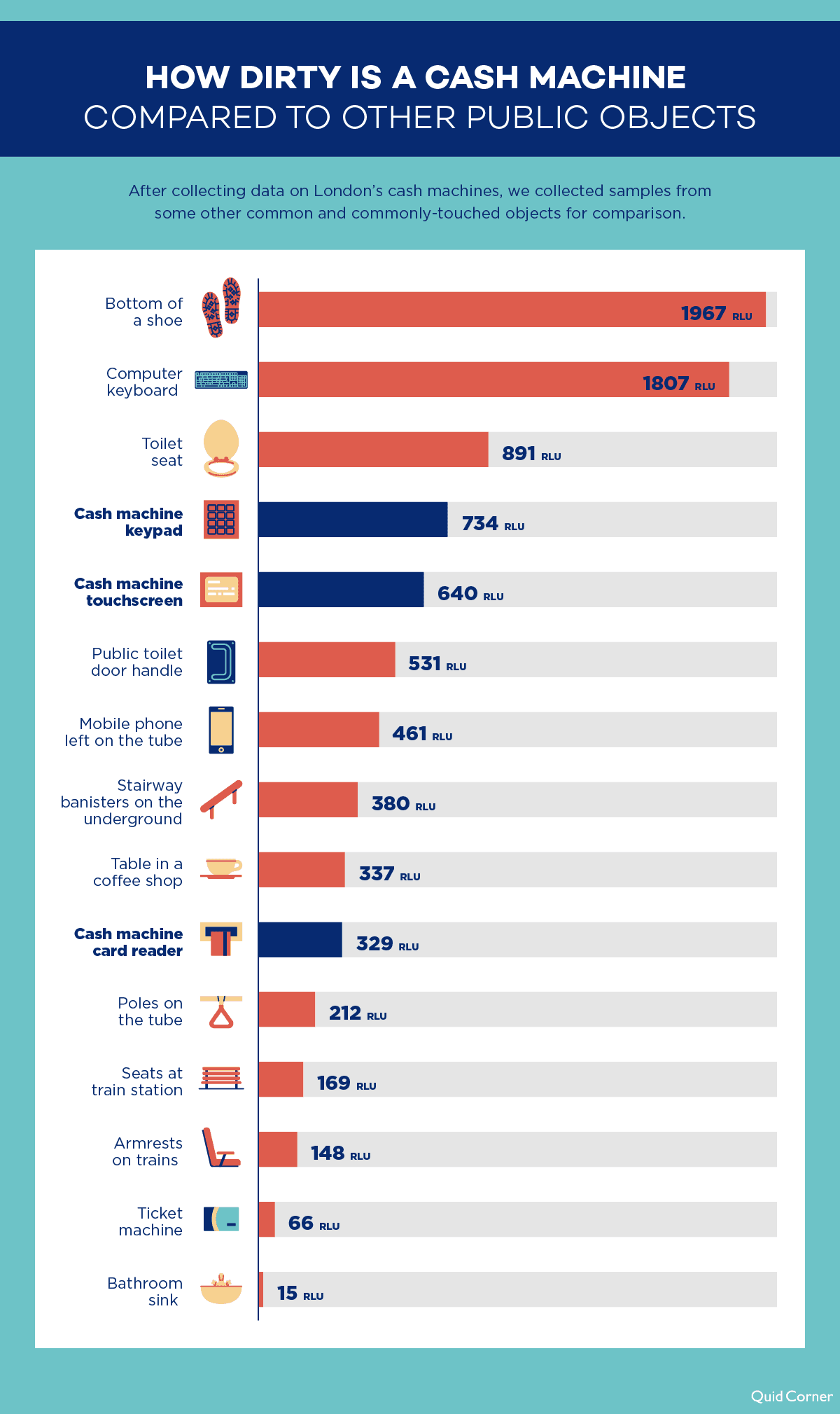 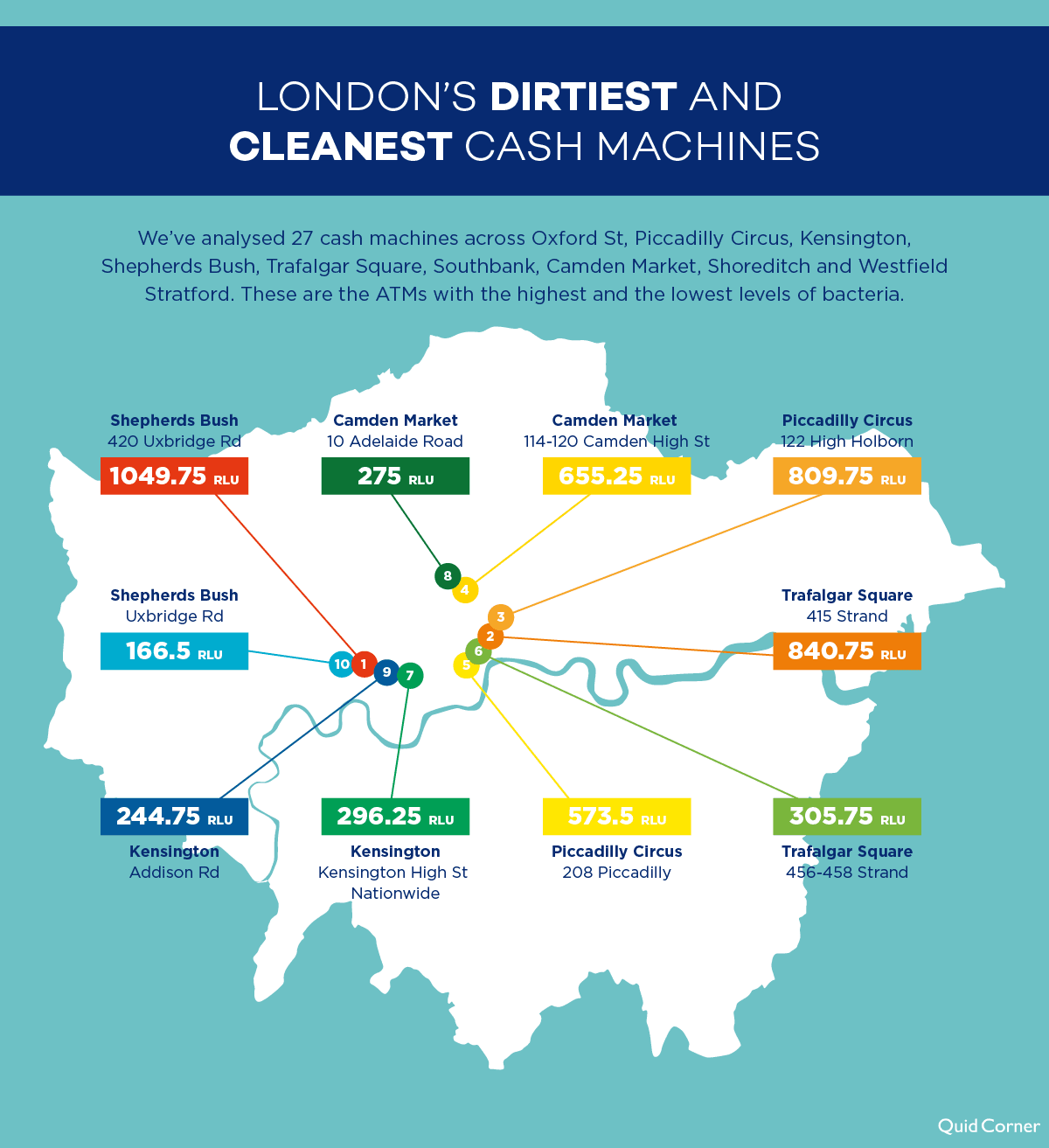 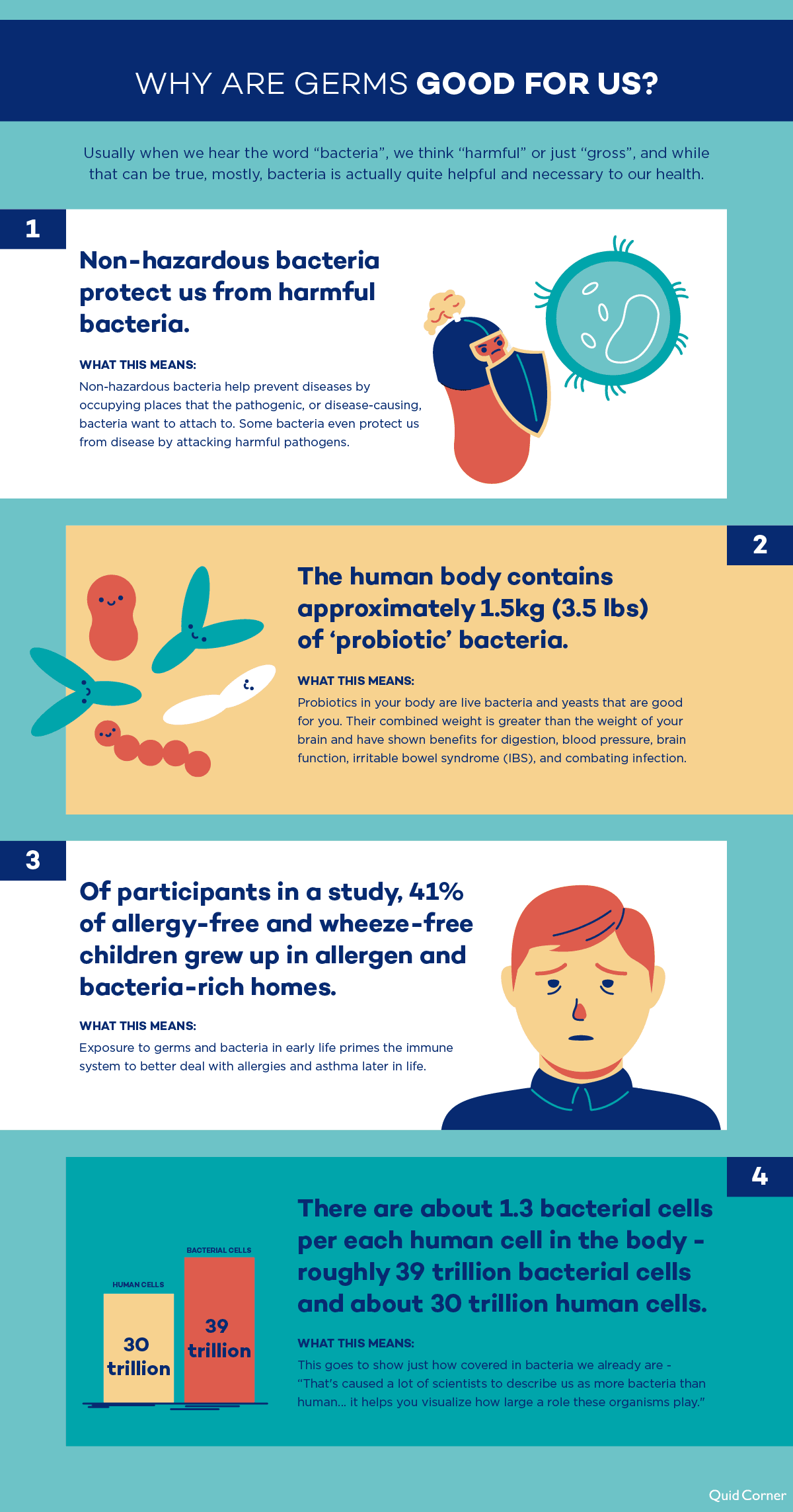 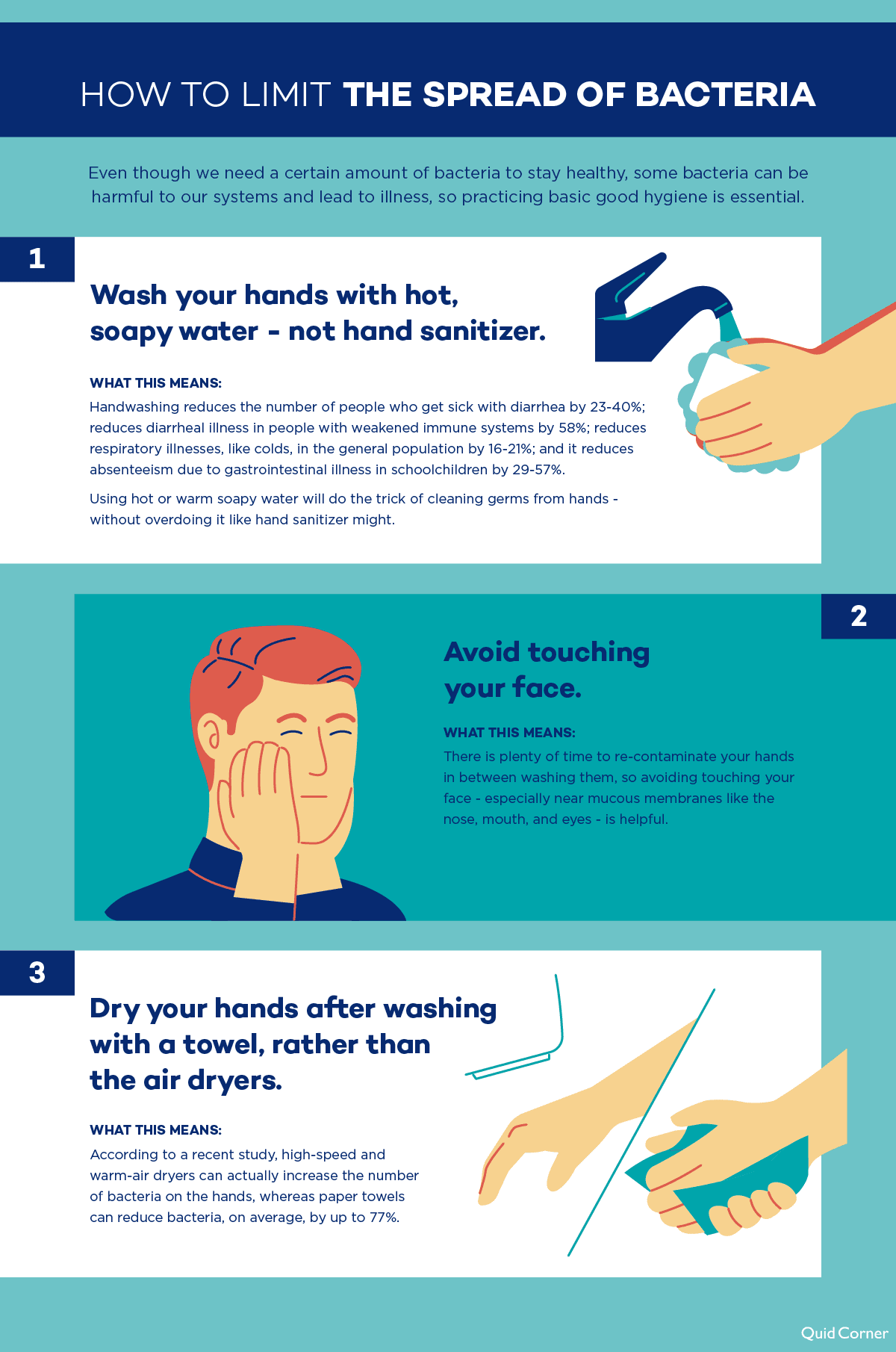