Positioned To Be A Cash Flow Machine

Increasing cash flows through efficient servicing of mortgages and a systematic approach towards increasing the size of COOP's overall mortgage portfolio.

At the same time, the company is more efficient and has a high level of customer satisfaction relative to its peers 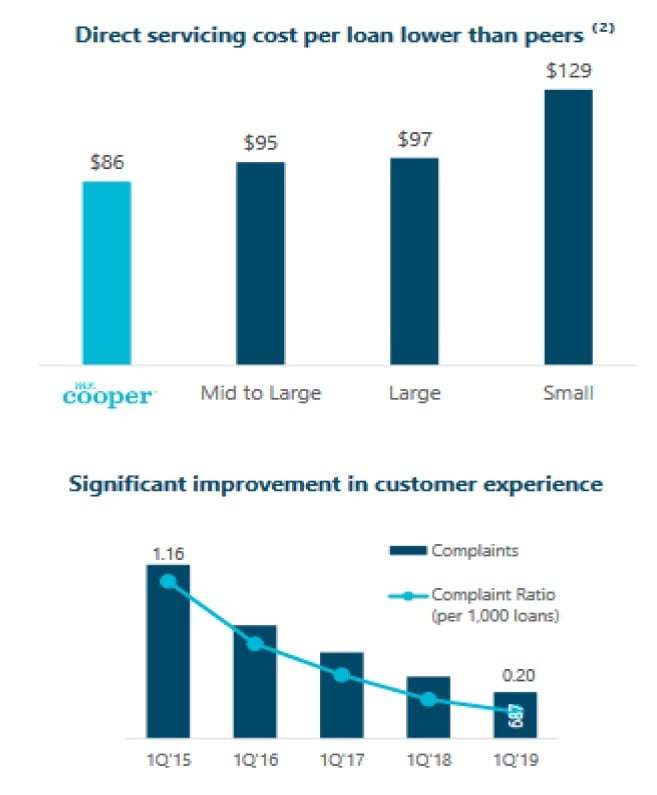 COOP's mortgage servicing margins are some of the highest in the industry, with increased margins forecast once Project Titan (cost cutting program enacted in 2018) costs roll off in 2020 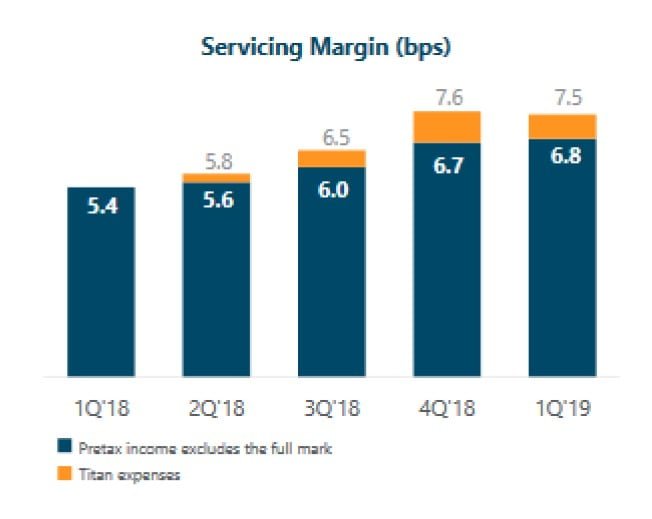 Efficiencies just beginning to be reflected in profitability

A Disciplined Approach To Cutting Costs

CEO Jay Bray on the March 2019 earnings call: Titan consists of several technology investments that are designed to further automate and reduce the cost of our servicing processes and position our team members to deliver an improved and differentiated experience for our customers.

CFO Chris Marshall on the March 2019 earnings call: Project Titan consists of a number of interrelated technology investments that will automate and streamline many of the critical stages of the servicing work stream. We expect Project Titan to begin contributing the results this year, but we will see much more noticeable efficiency benefits in 2020. Equally important and as Jay mentioned, Project Titan will also help us better understand our customers needs and provide them more closely tailored individual solutions.

Now in recent years, the servicing industry has not really benefited from new technology deployment like other sectors in the financial services industry and we expect Project Titan to be a significant operational differentiator for us in the future. We're very excited about the results we expect to see over time.

Project Titan Will Have a Significant Overall IRR Over Time

CFO Chris Marshall on the March 2019 earnings call: We've talked in the past of a long-term aspirational goal of seeing project Titan reduce overall expenses by as much as $100 million Our near-term line of sight is more to roughly a $30 million run rate -- annual run rate, which we think we will begin to see towards the end of this year. Having said that there are a number of these initiatives that have impacts across the servicing work stream. And the efficiency that we're going to get we think will be far beyond that $30 million over time. And I would just leave it at that.

As a result of the merger with WMIH in 2018, COOP has $6 billion in net operating loss carryforwards that do not begin to expire until 2032.

COOP has recorded a $300 million valuation allowance against the deferred tax asset.

The recorded deferred tax asset of $300 million is safe.

CFO Chris Marshall on the March 2019 earnings call: I would remind you, we’ve got a $300 million valuation allowance against our DTA. If anything, I think we have upside to recapture that.

Let me start with regard to the DTA. That grew because we had both a GAAP and a taxable loss, so we didn’t use the DTA to avoid any cash taxes. I’d just go back and reiterate that the profitability of the company going forward looks very strong. That’s what we use to project the value of the DTA.

The deferred tax asset shields the company's federal tax liabilities, while state taxes are in the low single digit range.

“I've been around the fixed-income market for 30 years, and I don't know of another asset that goes up in value as rates rise.” – Wes Edens CEO of Fortress speaking about mortgage servicing rights.

COOP's portfolio of mortgage servicing rights is highly levered towards increasing long-term interest rates. As a result, earnings during Q4 2018 and Q1 2019 have been clouded by an MSR markdown as rates have fallen dramatically.

This is the correlation between COOP's stock price and the ten year treasury yield over the past nine months.

Rates hit a low at the end of Q1, which, assuming that the low in rates remains intact throughout Q2, COOP will be looking at a significant increase in GAAP profit once they report Q2 earnings in August based on the positive mark in MSR values.

The increase in volume from originations resulting from the Pacific Union acquisition is estimated to be in excess of $10 billion annually to start.

The Pacific Union acquisition augments COOP's existing mortgage origination segment, with results reflected in Q1 earnings, as revenue from originations grew by 14% year over year and pretax income grew by 137%.

Xome is Mr. Cooper's real estate listing, transaction and valuation segment. Much like Zillow and Redfin, Xome aims to streamline the buying and selling of real estate into one consolidated transaction that cuts down on processing time and the overall cost to consumers.

CEO Jay Bray November 2018:The combined business will leverage the best team and technologies to offer more products to clients and become a leading provider in the mortgage services market. Ultimately, we will have a better platform with more clients, more revenues, and improve margins.

So it’s going to a little – take a little bit of time. I think the great news, again, they have an number of clients, it takes our revenue, doubles our revenue and then some and so I think that’s a good thing. And then with Ray, she is all over this and is doing a great job of integrating and laying out the plan. So, but it’s still, it’s, it’s a complicated – multiple platforms. It’s going to take us a couple of quarters to get to where we want to be.

CEO Jay Bray on the Q1 2019 call: Turning to Xome, earnings were limited due to the impact of the Assurant acquisition, but this quarter should be the trough as the integration is moving forward according to plan. During the quarter, we consolidated facilities, we did some right-sizing, we completed a large data migration and systems conversion which set us up for cost savings later in the year.

CFO Chris Marshall on the Q1 2019 call: As a result and with systems conversion remaining on current schedules, we’re feeling very good about Assurant reaching breakeven by year-end, if not a little before then. 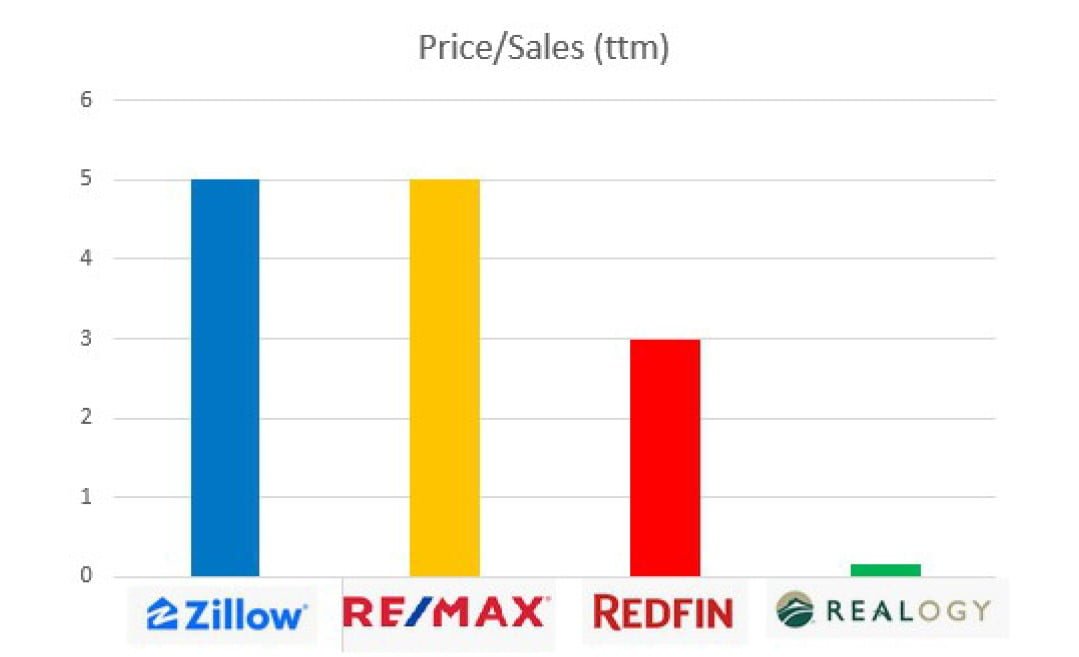 CEO Jay Bray from 2017: Xome is a $500 million revenue business, close to a 20 percent margin, and that’s just with the current franchise. If you look at the current spin within Nationstar, Xome has the potential to be a revenue generator of over $800 million. It’s an extremely valuable franchise. “We have had significant inbound inquiries about [whether] would we sell Xome and what would that look like. “We’re evaluating that. An $800 million company with a 20 percent margin is worth a very big pile of money.” And Bray said that making Xome accessible to third-party websites (like the unnamed FSBO platform) were part of its value.

COOP's board consists of two individuals from KKR

CEO Jay Bray followed shortly after with an approximately $500,000 purchase.

Mr. Cooper corporate debt is trading at a premium to par value as of the last trade on 5/10/2019. 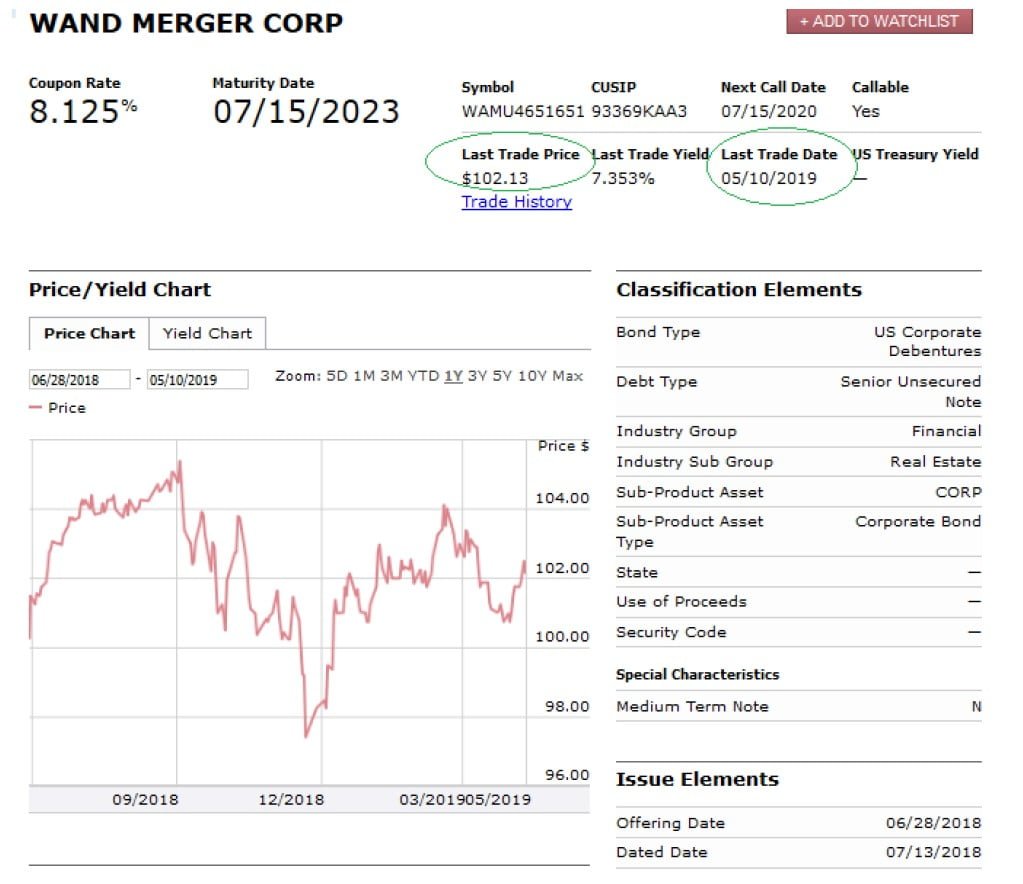 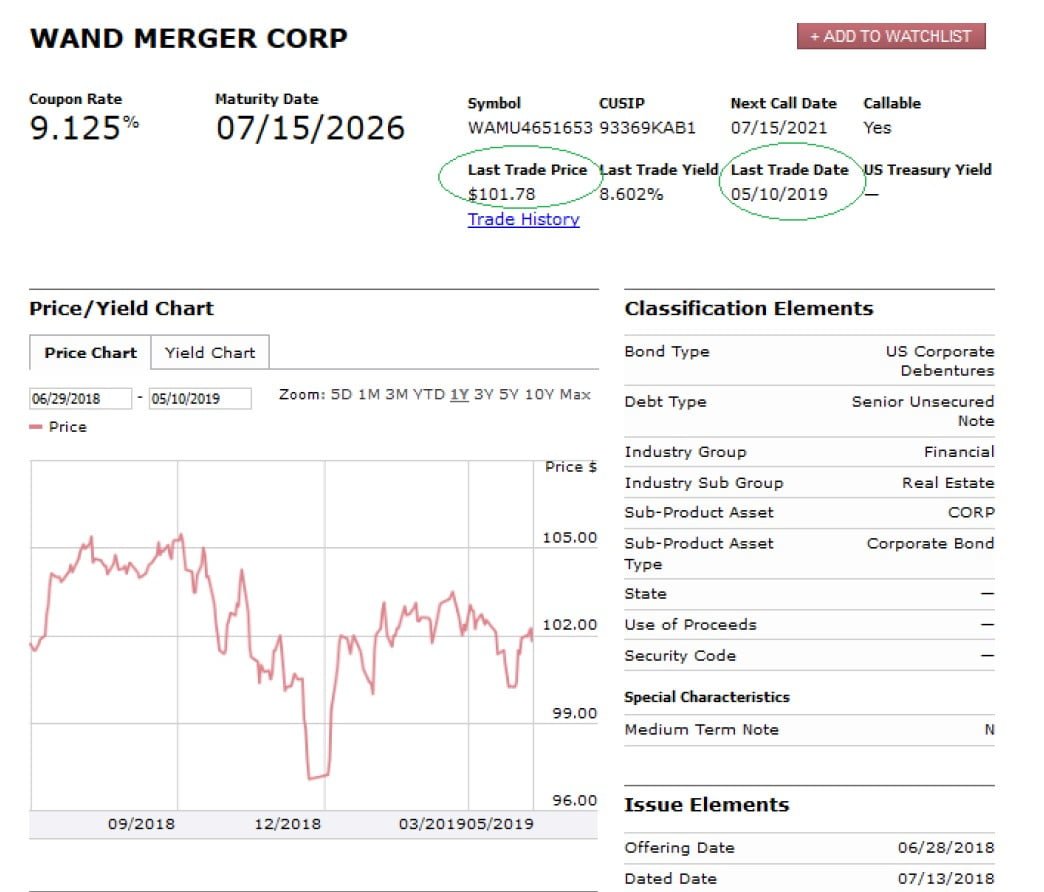 The stable rating outlook reflects our expectation that Nationstar will be able to maintain its solid servicing performance and reap the financial benefits of its larger servicing portfolio. It also reflects Moody's expectation that Nationstar's core profitability (which excludes changes in the value of mortgage servicing rights) will improve modestly and that the company will be able to maintain its leverage.

The ratings could be upgraded if the company demonstrates sustainable improvement in its financial performance, such as consistently achieving core pretax income to total assets of more than 1.5%, while maintaining its servicing performance and franchise value.

Trading At A Steep Discount To Peers

Among the top 5 mortgage servicers, COOP trades at a steep discount. 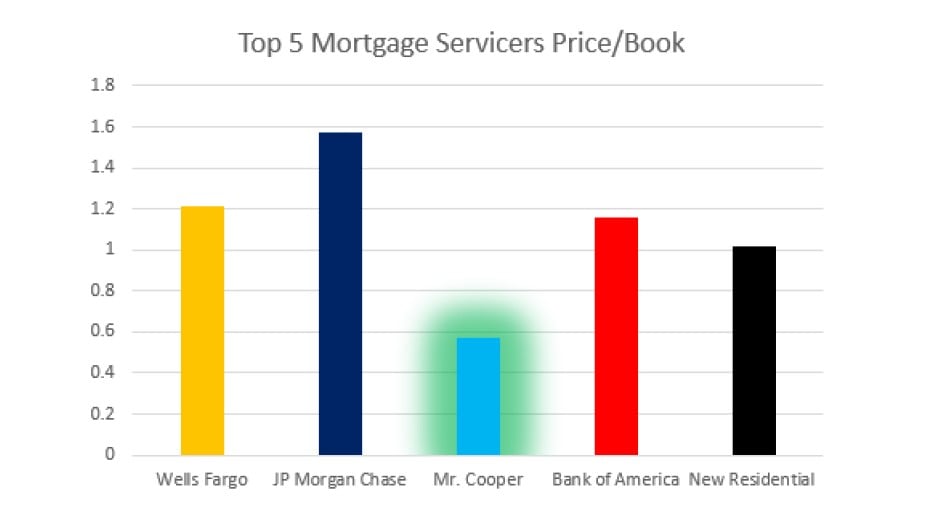 Among dedicated servicers, COOP is among the lowest in terms of valuation. 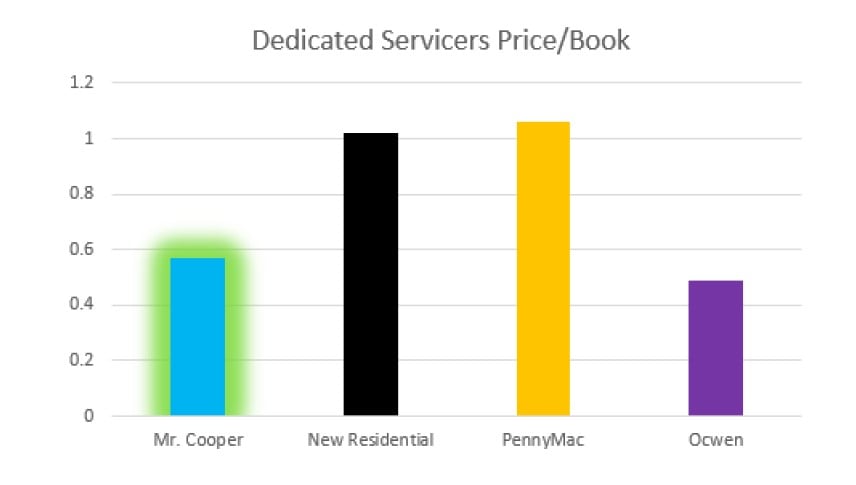 The complicated nature of Mr. Cooper's business, recent acquisitions, a unique merger and declining interest rates negatively affecting earnings have created an extreme value proposition in COOP shares. The depression in share price is occurring at a point in time when merger and efficiency related costs are peaking, further enhancing profitability in the quarters ahead. Interest rate related markdowns and merger/efficiency related costs have clouded the earnings picture over the past two quarters. However, the recent trough in rates hasn't been properly reflected in the share price, as COOP earnings will see an additional $50 million boost in GAAP profits at a 2.46% ten year yield.

Over the longer-term, management is creating an ultra-efficient mortgage servicing platform that will consistently produce cash while adequately replenishing the servicing portfolio due to the strength in their origination platform. Further, the company has abundant capital resources and KKR as a strategic partner, enabling opportunistic growth initiatives to be pursued when they become available. The growing efficiency of Mr. Cooper's servicing platform will also attract sub-servicing opportunities as financial companies will seek out the best in class solution for the servicing of their portfolios.

The undervalued nature of Xome adds significant optionality as the platform scales with the recent Assurant acquisition adding technological capabilities and the ability to attract third party clients at an increasing pace.

How Entertainment Stocks Performed During The Pandemic