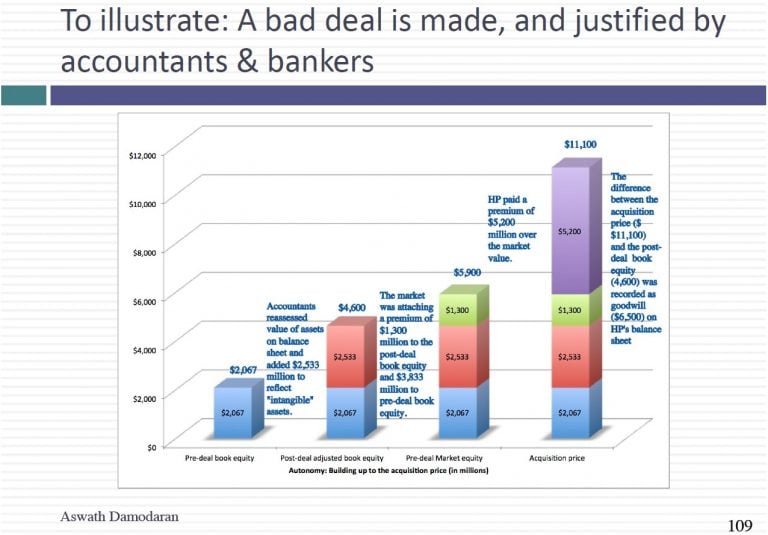 Acquisitions are exciting and fun to be part of but they are not great value creators and in today’s sessions, I tried to look at some of the reasons. While the mechanical reasons, using the wrong discount rate or valuing synergy & control right, are relatively easy to fix, the underlying problems of hubris, ego and over confidence are much more difficult to navigate. There are ways to succeed, though, and that is to go where the odds are best: small targets, preferably privately held or subsidiaries of public companies, with cost cutting as your primary synergy benefit. If you get a chance, take a look at a big M&A deal and see if you can break it down into its components. I did get briefly into the InBev/SABMiller merger in class but if you want something more extensive, I am going to offer you the blog post that I did on it when it happened: http://aswathdamodaran.blogspot.com

So Let's mop up the last few loose ends. We were talking about the tests for acquisitions and we talked about not using the company's cost of equity to do the valuation of a target company why because you're a safe company otherwise everything risky is going to look cheap to you. You're gonna buy all these risky companies thinking getting a bargain for all the wrong reasons. We also said even if you can borrow money at a really low rate and can borrow a lot of money don't use that in your cost of capital calculations. Why. Because you're subsidizing the target company shareholders for something that they had no role in creating. That's a simple rule. Ask yourself did they have in any role any role in doing this. The answer is no why pay a premium to them. But what do they have to do with it. And then we turn to synergy. We actually to do. Did we do. I think we turned to to control and we talked about this 20 percent premium and I told you where it came from right it was a merger that typical premium paid in acquisitions and there are two dangers with treating that premium.

One is that premium even if you believe it is the premium that people to have had to pay to do acquisitions includes what you paid for control for synergy for stupidity it's all in there and you're bundling it all together and putting it into your pricing which is not a great idea. And the other is control has to be transaction specific. And I gave you the example if you think you can go ahead and take this target company and run it better you can cut cause you can improve its margins to 30 percent. There is a big value to control right. If you can if you think you can take the target company in its own debt capacity and get it to borrow more money not using your debt capacity and get a lower cost of capital that's part of the value control. So value control could be worth a lot or could be worth nothing when if you have a target company it's already perfectly managed and perfectly right. What are you going to do about that company.

So let's talk a little bit about in general these premiums and discounts you see in acquisitions. One of the interesting things is when you see a premium or this kind of reflecting a bias in the process in private company valuation what you'll notice is a lot of discounting illiquidity discounts private company discount. And the reason is simple in private company valuation you're objective often is to come up with as low number as you can for your company because you're often doing the valuation for tax purposes for divorce purposes and you want the number to be lower in acquisition valuation you're going to see a lot of premium. Because people want to get deals done. Bankers CEOs top management. So when you see these numbers come from services don't take them as facts because the value of control can vary from company to company. So at this point I'm feeling a little desperate. I tried to get you to use your cost of equity and you said no because this is a target company it's riskier. I tried to use your cost of debt and get you to subsidize and said no because I would be subsidized. Then I tried to use up 20 percent control premium. You said no because just 20 percent coming from past 1. So I bring out my magic word. I said this synergy. So let me try a couple of synergy sales pitches and you tell me which one is more likely to be built on something solid so yes my first sales pitch. You're a steel company you're acquiring a chemical company after the merger. You're going to be a much safer company and because you're gonna be a much safer company you'll have a lower cost of capital therefore your value should be high. Let's take that that that statement I didn't take each and pieces. A steel company by chemical company is the combined company going to be safer when we did option pricing remember we could buy two companies what happened the variance of the combined company. It was lower than the value variance of the two companies especially if it's in two different businesses. So yeah that part of the statement is true you will become a safer company. But the second part I said therefore your cost cap will be lower. Is that true what kind of risk am I eliminating when when I take a steel company and make it by a technology company or a chemical company firm specific risk. How do we compute cost of equity and capital for individual companies. We used the beta which measures the risk you cannot diversify away. So combining two companies you're going to reduce risk but the risk of reducing them wasn't showing up in your cost of capital anyway.

So in general you will find that when people when there is synergy in a merger it very seldom is going to show up in the denominator if this energy is going to show up in the numerator and the cash flows as high growth is lower cost I will give you the two exceptions that drew two cases where you might have a lower discount rate after a merger and you're going to be not surprised by either one of them. But most of the time 95 percent of synergy is in the numerator. So let's take the numerator. There are two ways I can create synergy the numerator and what is I can create higher growth as a combined company. The second is I can cut your costs in higher growth and lower costs create a value for synergy all right. In fact when I have higher growth and lower.