The first quarter of 2019 proved to be one of the best in recent memory, with stock markets around the world returning 8-15%. The Capital Ideas Fund is up 12.47%1 year to date and our annualized return since inception now stands at 17.91%1 versus 6.17% for the S&P/TSX Total Return Index. These high returns are a result of a bounce back from a horrible Q4 2018 and, more importantly, reflect a big shift in monetary policy projections.

The Capital Ideas Fund re-opened to new assets as of April 1st, 2019. We have now also started investing in US equities which we believe will give us considerable new investment options and growth opportunities. We provide much more detail and reasoning behind the timing of this decision later in this newsletter. Due to this event, we have been speaking with many current and prospective investors and we have returned from these meetings with a few common questions. One recurring request was from investors who would like updates on both overall sector and portfolio exposure.

At the time of this writing, the fund now holds 19% US equities and we expect this weighting to increase over time. Currently, the top 20 stocks in our stock tracker are exactly 50% Canadian listed and 50% US listed. We think this is a good gauge of the direction the fund is shifting. That being said, of those 20 companies, less than 5% of aggregate revenue would be derived from Canada. The fund is currently fully invested at 121% long and 21% short for a net 100% position. As for sector exposure, the fund is roughly 31% technology, 31% consumer cyclical, 21% consumer non-cyclical, 6% industrial, 6% energy and materials and 3% financials.

Another question we were asked was about our macro view. Even though we are stock pickers and view the stock market as a group of stocks and not a single machine that dictates returns, investors would still like our market outlook. We have provided it below and it helps explain part of our rationale for re-opening the fund.

Compared to 2018, we have adjusted our outlook for the stock market. We were defensive over the past year, holding relatively high amounts of cash and short positions. The fund has calibrated according to the new outlook and we are now fully invested.

What has changed since the end of 2018? The Federal Reserve has normalized interest rates from the artificially low levels due to the 2008 financial crisis. The Federal Reserve is tasked with a dual mandate of maximizing employment while keeping inflation stable. The unemployment rate is at its lowest level in over 50 years while inflation has been stable for over 20 years (Figure 1). Both of these facts allow the Fed to sit on the sidelines for now and keep interest rates stable.

What could bring the Central Bank off the sidelines and raise rates? Inflation. As of right now we don’t anticipate inflation in the market and we’ll highlight a few charts in order to illustrate the point.

One of the most widely known phenomena is the Baby Boom. There was a significant increase in the birth rate which occurred in a short period of time. Figure 2 illustrates how this generation entered the workforce in size during the 70-80’s.

At the same time as the working age population was growing significantly, women began entering the workforce in large numbers. The participation rate of women doubled over a couple decades at the same time as the population in total was growing at unprecedented levels. This large increase in workers led to increased wealth, increased spending and, as a result, an increase in prices (inflation).

These charts are important when it comes to investing because Baby Boomers’ children, Millennials, were born over a longer timeline and most haven’t entered their prime spending era or are delaying these expenditures (starting families). Essentially, the demographic forces that caused the high inflation of the 70s and 80s aren’t occurring anymore, so we don’t anticipate a hike in inflation going forward.

This is a long-winded explanation of why we think inflation isn’t an issue, interest rates have been normalized and stocks are attractive at these levels, and therefore why we feel excited to participate in the market.

BlackRock manages $6 trillion --yes, trillion-- of institutional and retail assets and if anyone could take the pulse of investors and the market it would be them. Recently Larry Fink, BlackRock CEO, said “Many people thought we were going to be in a period of rising rates. We are not…With the market rally as large as it is, I would clearly tell you at this moment, most investors are underinvested…Despite where the markets are, we have yet to see money being put to work.”

Investors are the most overweight cash since the financial crisis. It is easy to take money off the table when times are uncertain. It is a lot harder to put money back to work when the appropriate time comes. We’ve been putting our money to work. We are investing in companies with ROEs ranging from 18-40% and we’re currently able to pay more than fair multiples for these companies. We see an attractive environment and think we’ll be able to continue to achieve good returns for our investors.

We have been reading and reflecting on Michael Mauboussin’s work for many years. He recently released a research report titled “Who is on the other side?” We found ourselves doing a lot of underlining and making notes in the margins. His papers are heavily entrenched with research, as evidenced by the 21 pages of appendices, endnotes and resources. We enjoy this type of writing and this paper in particular reminded us of a drawing we have done for many clients in the past but have never included in the newsletter.

Mouboussin’s research, as well as our illustration, both point to the fact that the stock market is mostly efficient. By this we mean that most stock prices reflect all of the information available and most investment managers’ returns will underperform once they have subtracted out their fees. However, there are pockets of inefficiency and as Mauboussin concludes, “Identifying and exploiting these pockets of inefficiency should be the main focus of active managers.”

Our drawing (Figure 4), which we’ve chicken scratched for investors many times before, emphasizes this point. The entire sheet of paper represents the stock market as a whole and encompasses all investment options. Within the market we draw a large circle for the efficient part of the market. The efficient market doesn’t just represent the majority, but more like 95% of all investment choices. We believe that there are small pockets of inefficiency in the less followed and niche corners of the market. 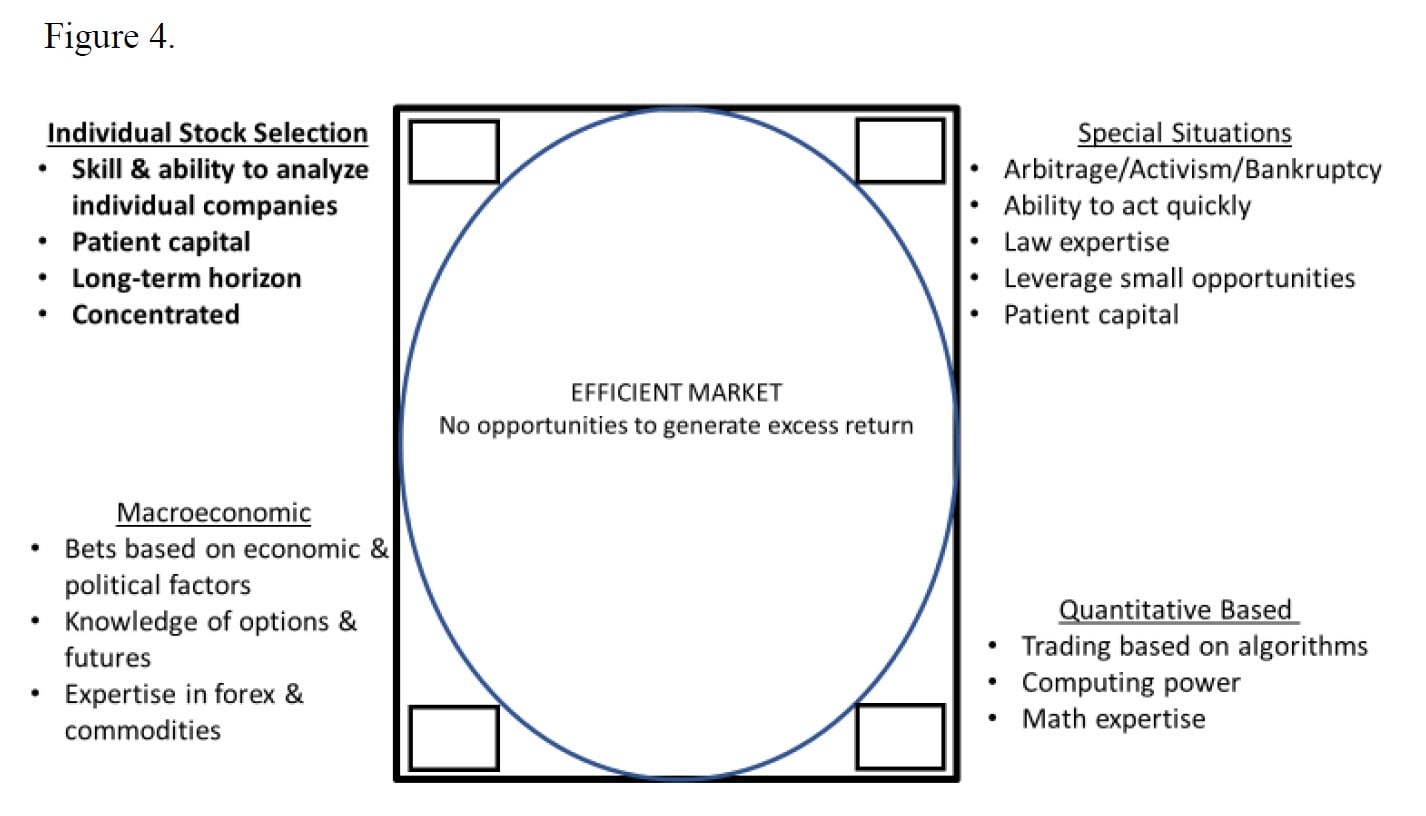 Our Corner of the Market

They are few and far between but we have read about and met a few investment managers that have consistently beat the market. We would put ourselves in this category, now having beat the market in 10 of 11 fiscal years and by a significant margin.

We’ve mentioned it many times before, but one of the reasons we outperform is because we have a long-term outlook. We’re not trading stocks day to day or making bets on which way the market is going. It is this long-term outlook and patience that enables the magic of compounding to go to work. We have provided an example in figure 5, of why and how owning only the super compounders is the first key to success.

Ten years from now, if both companies grew the value of their businesses by their respective rates and there wasn’t any multiple expansion or contraction, Company A’s stock would go from $6.25/share to $58.21 share and Company B’s stock would go from $2.25/share to $9.10 share. Company A compounded at 25% and returned 831% while Company B compounded at 15% and returned 304%. Investors made money in both scenarios but when the math is laid out like this the significance of compound growth leaps off the page. 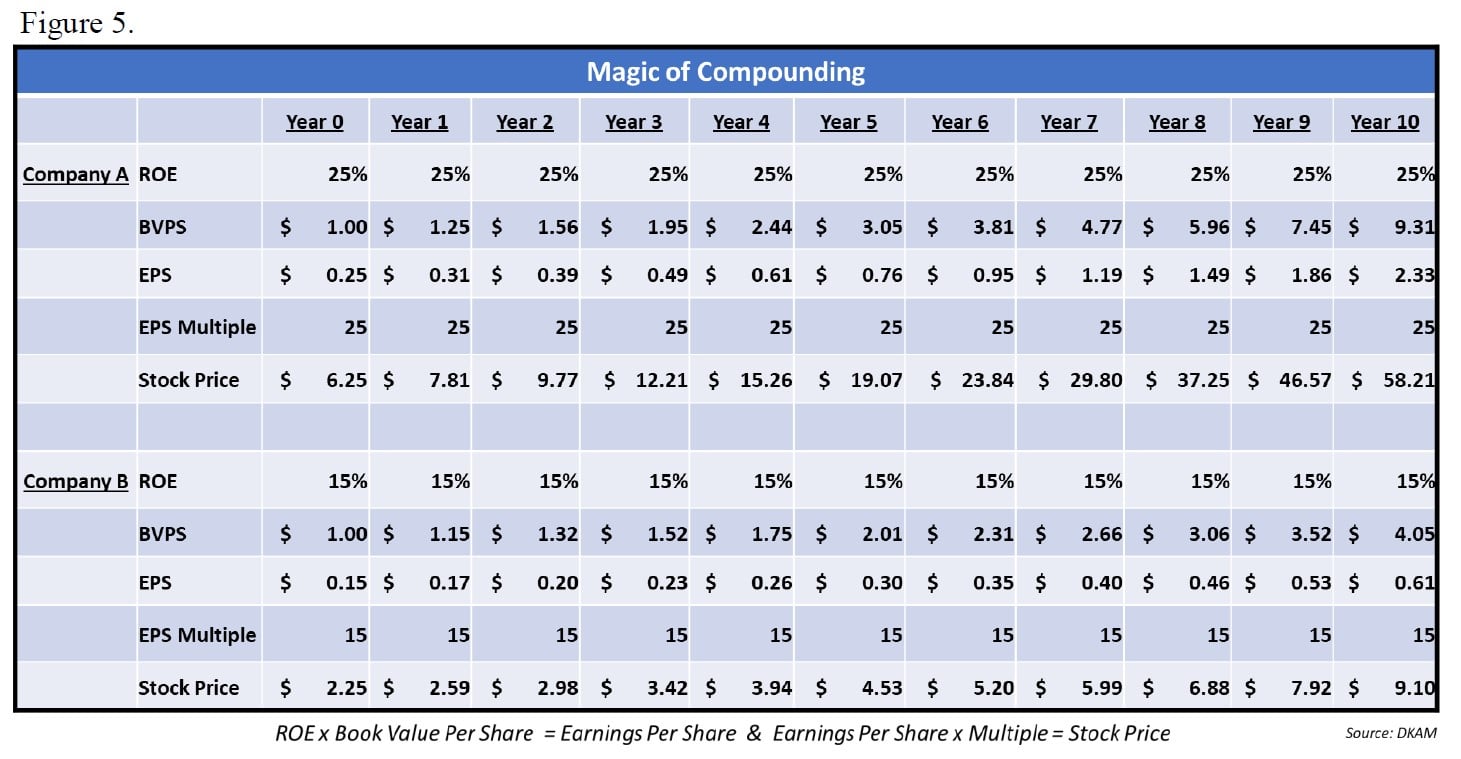 The second key to success is the actual skill and ability to find the stocks that can compound like Company A from above. This process demands diligence and many hours of what we refer to as “ripping companies apart” (financial modelling, meeting with management teams, inspecting businesses in person). Many companies won’t be able to grow in the future like they have in the past. It is the responsibility of the stock picker to filter this stock universe and only own the companies that will be able to compound at +20% for the next 10 years.

The third key to our success comes from our actual structure. The hedge fund model is the optimal way to run our business because it gives us the ability to make large investments in our best ideas. There aren’t many super compounders in the world and even fewer that are attractively priced. Concentration allows the fund to only own the best of the best and not have to reach into the efficiently priced part of the market.

At the time of this writing (April 26th), the top picks from the last newsletter are up on average 27.3% so far this year.

We still think Spin Master has significant upside with limited downside. Spin Master has a ROE of 30% and is trading on 12x 2020 cash earnings. We expect the Toy R’ Us disruption to completely dissipate by the second half of 2019 and for Spin Master to start to put is cash hoard to work with multiple tuck-in acquisitions or even a transformational one.

Constellation Software has obviously rebounded well from the late 2018 selloff. That being said, we still think the stock is a buy and we own it in size. Constellation has a 30% ROE and is trading on 21x 2020 cash earnings. They recently announced a $20/share special dividend and we expect similar announcements in the years ahead.

Due to valuation, we are replacing Boyd Group in our top picks with RediShred Capital. Over the years RediShred has proven to be an excellent acquiror and they recently deployed a significant amount of capital on acquisitions in 2018 and the beginning of 2019. This is a small and not well-known stock with a 20% ROE on 9x 2020 cash earnings.

As mentioned earlier, with the fund has re-opening, we have been meeting with our current and prospective investors. There have been a few common questions and comments, with one being succession. Jason is currently 55 years old and Jesse is 20 years his junior. In our minds, succession isn't the correct question and not how we view our relationship. We view our relationship like Buffett and Munger, where one may be older than the other, but they are partners, both with mindset of working (picking stocks) well into their eighties, or nineties in Munger's case. We both have hobbies, but even in "retirement" would still be analyzing businesses and picking winners, so why not belong to a team and do it together. Our partnership has been working for the past 8 years and we don't expect any changes in this dynamic for a long, long time.

We would like to sincerely thank the entire Donville Kent family, including all of our investors and employees. We’re excited to be putting money to work in this environment. Over the next couple months, we will be travelling to multiple cities across North America in order to visit management teams and inspect corporate locations. We’re always on the lookout for the next super compounder.