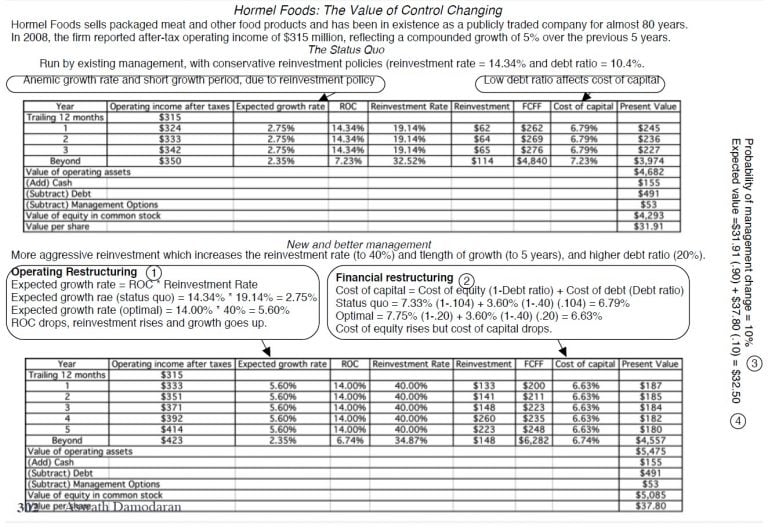 The bulk of today’s class was spent on the Whole Foods Dining case. While the case itself will soon be forgotten (as it should), I hope that some of the issues that we talked about today stay fresh. In particular, here were some of the central themes (most of which are not original):

Theme 1: The discount rate for a project should reflect the risk of the project, not the risk of the company looking at the project. Hence, it is the beta for restaurants that drives the cost of capital for the dining business, rather than the cost of capital for Whole Foods (or Amazon) as a company. That principle gets revisited when we talk about acquisition valuation… or in any context, where risk is a consideration.

Theme 2: To get a measure of incremental cash flows, you cannot just ask the question, "What will happen if I take this investment?". You have to follow up and ask the next question: "What will happen if I don't take the investment? It is the incremental effect that you should count. That was the rationale we used for counting the savings from the parking investment not made in year 12.

Theme 3: If you decide to extend the life on an investment or to make earnings grow at a higher rate, you have to reinvest more to make this possible. In the context of the case, that is the rationale for investing more in capital maintenance in the longer life scenario than in the finite life scenario. Thus, I am not looking for you to make the same capital maintenance assumptions that I did but I am looking for you to differentiate between the two scenarios.

The Whole Foods Dining Case, Synergy And Options In Investing

so let's spend some time you've been spending the last couple of weeks is sick of home food you've sick of restaurants. But I wanted to get it behind us before we move on and I want to use this case to actually talk about things that are more general because obviously in cases it's a sunk cost. So as you look at the numbers that I wish we'd done that don't let the small things get in the way. Know so I'll actually send you at noon and send your template on how the case is going to be graded and essentially he said these are the things I'm looking for. And most of you there are like 10 things on that list. And if you get all 10 drong you get zero. But I wager that most of you got eight and a half maybe nine out of 10. And one day you might have. So we'll talk about a couple of things that I think are common issues in these kinds of cases but I'm going to use it extrapolate to the rest of investment analysis. So first I want to talk a little bit about time. What am I talking about.

Notice how confusing your 0 and your wine and your too can become because what exactly is your 0 is it last year. And I think the problem comes from the fact that we wanted convenience and investment analysis in the real world when the cash flows come in. They come in across time they're continuous right. The problem is you don't want to be discounted cash flows on an hourly basis or a daily basis. So for convenience we act like everything happens on the last day of the year. That's what happens when you discount cash flows. But. Some people try to be extra clever and use midpoint conventions but it's still a point in time. Cash flows occur across time so when you talk about continuous time continuous time actually is difficult to deal with. So we deal with discrete time. So when you do valuation investment analysis you know what year zero is it right now. This is when you're making the decision to go one is it the next 365 days. It's not a fiscal year. It's not a calendar year. The next 365 days. And that's problematic Chris accountants don't think in that time. Right so if you said undervalue a company today. No it's April 3rd. You want the next 365 days. You ask him give me the last 365 days. You're not going to get it. You might be getting it through March 30th if you have a march of first quarter ending there or you're stuck with annual reports December 30 first. You can change that. But you have to live in the world that exists today. Your decision can be as of January 1st 2019 because unless you built a time machine you're where you are. So it's something that's always an issue. So if you struggle with that it's because of this artificial 365 days forward. So when you look at your one year two year three the best way to think about them is not as 2020 2021 it's the next 365 days and if you put if you labeled it as 2020 I'm not going to freak out. I'm just saying that that's not the way cash flows. So let me give you the hammer first and then we'll look at the next.

So this is a page you're going to freak out because a number you will have will not be the number that I got but you put your mind address 55 of the groups down in their summary numbers. No two groups had the same number.

So put that away because it and you think it was the same case the same facts. That's the first thing to recognize is you have to make some assumptions along the way and unless you. And that's why I've never ruled out two people doing the same company. There is no way. On God's good that even if you had all of the same fanaticism that your company was going to get the same number. So here's what I found looking at the notice I looked at the return on capital but I spent very little time on it. Do you know why. What is the endgame in the case. I was upset my going to invest in this project. I knew I was going to make the investment in return capital so I could have spent half my time talking about accounting allocation. And the question is why if I'm not good if I were basing my decision on return on capital I'd be spending on should I use incremental earnings should I use average capital. So no matter how you slice it the project does not look good. If I just look at the return on capital for just the restaurants to about six point three percent. It does look better if I bring in those side benefits from the proof prepared foods it makes a return capital look better. And you are going to see that pattern play out. And all my conclusions when I computed the net present value with the finite life the 15 year life the net present value that I got.

Doesn't look right. Is it that pull the best was minus. No it actually is minus 109 million without the side benefits ridded it's negative. But when you bring in the side benefits the net present value becomes plus 2 million. When I look.