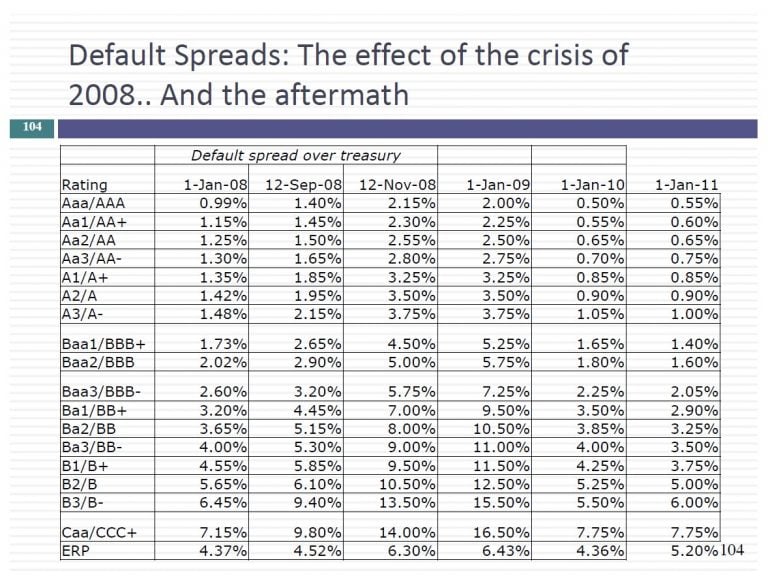 In this session, we started with computing debt ratios for companies and how to deal with hybrid securities.. We then moved on to getting the base year’s earnings right and explored several issues:

Session 7: From Discount Rates To Cash Flows – The Earnings Start

OK. Talk about stereotyping right. I made a more interesting movie. I have made the professor a woman. And the students in the class mixed because that's a her.

I mean this is so easy to tell where this is going. Right. So no but that's not. I'm not writing the scripts I would try. I wouldn't go any further with that. But let's start with what today's class is going to cover. It's going to cover earnings and cash flows and started the class testing and the start of the class steps. The rules are changing on both earnings and cash flow. So you're right. Here are my questions you're doing the valuation of a company and the valuation is as of today. That's something I want to bring home. Many of you are going to get financials that end on September 30th or December 31 don't operate under the delusion that you're actually valuing companies on January 1st of 2019 or so it's pointless. What's the point of telling me that something was undervalued started. This is about acting which means your valuations have to be Currington update. The problem though is financial statements are not always current at market prices but financial statements reflect that.

So your are your choices about how you would get the numbers to use in the evaluation. You can take the most recent annual report a 10K which for many of you is going to be 2017. The 2018 annual report might not come out especially with an emerging market company till April maybe May and may be too late. The it could be that you take the last quarter's earnings and multiply by four today you're doing that if you have any seasonality of retail for me take the fourth quarter of the early multiply by you're going to get strange looking numbers kind of given away the answer you don't want to use 2079 numbers why because you want to value the company using updated numbers. You don't take the last quarter and multiply by four. You know what you love to do. You love to create your own updated 12 month number. And it's really very easy to do. The more the most direct way to do it is to dig for 10 for quarterly reports and add them all up. But I'm actually going to be known in the webcast I'm going to send this this Friday. I'm going to show you how with one 10k and one. Q You can create a trailing 12 month numbers because there's enough information in the 10 Q that in conjunction with the 10k you can create the trailing for my numbers.

That's what I had to do in my poor valuation because apogee or ended September 30th. And the last. And it's September 30th. Obviously they've had an annual report since then. I've got to update the numbers reflect that additional quarter. So first the so the first piece of advice that you want updated numbers. Now some of you will be in markets where this might be difficult to get to. We'll talk about what to do the. Today. We're also going to talk about this notion of capital expenditure and accounting classes do ruined the definition. Right. Because the way accountants define cap ex what goes into CapEx. I mean let's get started the generic definition what's copeck supposed to be it's any expense that's designed to create benefits over many years. Right. That's a generic definition and I've used that generic definition of cap ex. I'd like you to tell me which of the following you would put into the capital expenditure column. So define cap as any expenditure that creates benefits over many years building a manufacturing plant. Obviously CapEx right now what are the expenses if you define CapEx as an expense designed to create benefits over many years supercop X-ray. What company in its right mind does are India expect to benefit you. What about a consumer product company like Coca-Cola doing advertising to build up its brand name.

That's also a long term investment you could argue that should be a CapEx. And if you're a consulting firm or a bank whose primary asset is human capital recruiting and training expenses on roads you see where I'm going. The accounting definition of CapEx is way too narrow. What do you see as capital expenditures in the statement of cash flows or company which of these items is going to be in the CapEx at least as your company defines it only the manufacturing plant invest accounting as we know it was designed for the old time manufacturing company. So when you buy a play a plant a tree this guy affects all the rest they treat as operating expense which is going to screw us up big time and we have to go fix it. So one of the things we're going to talk about is how to clean up earnings for this Clil Or inconsistency. How big can it be. Thirty five years ago you could have gotten away with the old accounting rules because most companies were manufacturing companies today. Take the 10 largest companies that were take a look at the largest 10 largest market cap companies in the world. Not a single one is a manufacturing company.