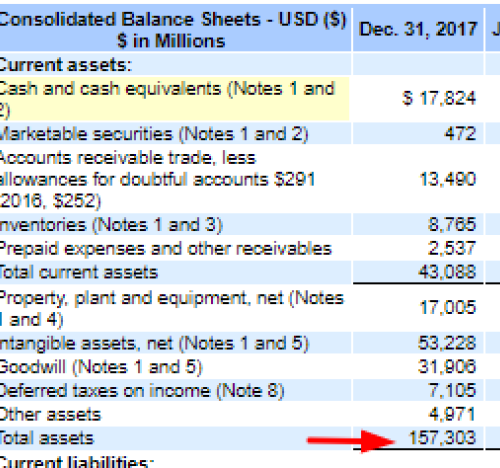 Value investors love this rating scale as it gives you a good initial insight into all aspects of the financial statements. It utilizes the income statement, balance sheet, and the cash flow statement.

As you will see, the Piotroski score is a pretty simple device to seek out great, undervalued companies.

This score helps you find companies that are profitable have improving margins, don’t employ any accounting tricks, and have strengthing balance sheets.

Let’s dive in and take a look at what the PIotroski Score is and how do we put it to use.

What is the Piotroski Score?

The Piotroski Score is a range of values between 0 to 9, with 9 being the highest score possible. Based on nine criteria used to determine the strength’s of a companies financial position, this score uses this range to help decipher the best value stocks.

The Piotroski score, named after Chicago Accounting Professor Joseph Piotroski, who devised the scale. All of this according to the specific aspects of the companies financial statements.

The points are then added up to determine which company is the best value stock.

Let’s break down the criteria into their different categories.

Leverage, Liquidity, and Source of Funds

How the scoring works.

Let’s take a look at some of the terms and break them down a little bit.

Ok, we have spent some time looking at what the Piotroski Score is, what some of the terms are and why it exists.

Now let’s start to put it into practice.

The first company I would like to use to set this up is going to be Johnson & Johnson, a nice stable, mature company that is a dividend aristocrat. Their ticker symbol is JNJ and their current price, as of December 19, 2018, is $127.61.

Another note, all numbers will be listed as millions unless otherwise stated.

To start to put this all together, we are going to pull some numbers from the 10-k from 2017. I like to use the 10-ks where ever possible as these numbers are audited and in theory the most accurate. You can use either TTM or the 10-q if you are comfortable with those.

First I will show examples of where each number comes from so you can find these for yourself.

Net Income will come from the cash flow statement.

Cash Flow from Operations will also come from the cash flow statement.

Up next is revenue

Gross profit will be next, located in the consolidated statements of earnings. Calculated as Revenue – Cost of products (goods) sold. Located on the earnings statement, but it is always good to know how to calculate the number.

Gross profit is the sales minus the cost of goods to produce, which will leave you with your gross profit.

The lower the cost of goods sold, the higher the gross profit. The lower number can be great, provided the products sold do not erode in quality.

The total assets are located on the balance sheet. I will show you where to find the first one, and then I will pull the numbers together for us from the previous year’s balance sheets.

Taking all five of these years and adding them up and then dividing by five we get:

Total assets at the beginning of the year. We will find this number again on the balance sheet. 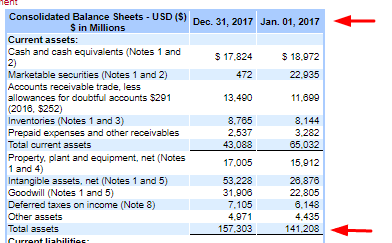 Next up, Long-term debt & Capital Lease Obligations. You can find long-term debt on the balance sheet under the current liabilities section.

You can classify long-term debt as any debt that is due longer than twelve months.

If you are curious about the length of any of these notes and their amounts, you can find more information under the notes to financial documents.

In this case, it is Note 4. Check it out; it is pretty interesting. 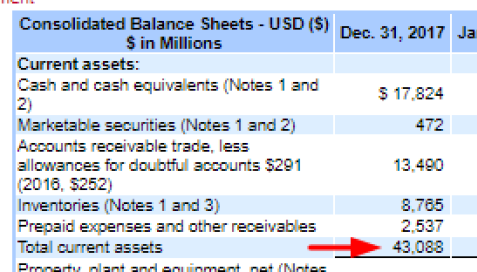 And lastly, we need to find total current liabilities which we can find on the balance sheet.

Now that we have assembled all the numbers that we need to start answering our questions to find out if our company is in good shape financially using the Piotroski score.

Johnson & Johnson’s current Cash Flow from Operations was positive at $21,056

Question 3: Change in Return on Assets

Therefore 2016 is lower than in 2017. Thus the leverage was higher this year.

Score 1 if this year’s current ratio is higher, 0 if it is lower.

Question 7: Change in Shares in Issue

Asset Turnover (2017) = Revenue / Total Assets at the beginning of the year.

Evaluation of the Piotroski Score

Johnson & Johnson has a score of 4, which is very typical of a stable, mature company. During the last 13 years, Johnson & Johnson’s score has seen a high of 8, a low of 4 and a median of 6.

Overall the Piotroski score helps illustrate what we probably already know about this company that they are a stable, mature company that might have periods of growth and increasing free cash, with periods of stability and little to no growth.

Let’s try another one, huh?

After doing a quick stock screen on my favorite screener, finviz, I found a company that was interesting.

Oshkosh Corporation. If you are not familiar with them, here is a little info about them.

Ok, now that we know a little bit about the company let’s take a look at their Piotroski score.

This time I will gather the information and walk you through the questions. The numbers will be gathered from the 2018 10-k.

Oshkosh Corp’s current Net Income is $472, which is positive.

Oshkosh Corp’s current cash flow from operations was $436, which is positive.

Question 3: Change in Return on Assets

Oshkosh Corps Net Income for 2018 was 472, compared to its current Cash Flow from Operations which was 436.

Because the Cash Flow from Operations was below the Net Income, 436 < 472.

Question 7: Change in Shares in Issue

This is a good or high score and indicates that Oshkosh Corp is in a good situation financially.

After all the analysis of the Piotroski score, hopefully we have established that this is a great tool to help us determine the financial health of any company we are interested in.

I love that it examines all aspects of the financial statements and utilizes different metrics to help us find the “truth”.

The nine questions that we use are pretty straightforward and there is no higher math involved in any of the questions.

This is a process that is highly underutilized and can be very useful for you in your quest to uncover great companies.

The two examples that we used showed how some more mature companies are doing and this process would work just as well with new, upcoming growth companies as well.

Some additional resources for you. If you are the type that likes to use automation there are a few Piotroski score screeners out there. The one that I like the best is here.

These are great articles that help outline the Piotroski score in additional detail and were very helpful to me as I was writing this article.

As always, please use these formulas and processes as a part of investment research and do not buy any company based solely on one result.

Thanks as always for reading and I hope you found something useful in this article and it can help you on your quest.

If you have any questions or comments, please reach out. I am here to help.