The following post is from a report written by Liv-Ex

Champagne has long been an on-trade favourite. In recent years, it has also established itself as a key secondary market player alongside other investment grade wines.

Since 2010, Champagne’s trade share has risen from 1% to 8% by value, and the number of unique Champagnes trading has multiplied.

In this detailed report, we examine:

Champagne is a unique product among its fine wine peers. Its distribution network is unparalleled, the environments that it exists in are diverse – restaurants, nightclubs, royal weddings – and brand recognition is stronger than in any other part of the market. Mentions of Dom Perignon will likely spark far more excitement than the top names of Burgundy and Bordeaux among non-wine experts. Champagne therefore touches drinkers not typically engaged with fine wine, and on a global scale.

A market without bubbles

For the past decade, Champagne has occupied its own niche in the fine wine market, undisturbed by some of the major events that unsettled Bordeaux, and not afforded the level of recent attention that has seen prices of Burgundy spike. The Champagne 50 Index has steadily risen almost every year, with no sharp upward or downward movements. It has only dipped in one year out of the past ten.

Development of the Champagne Market 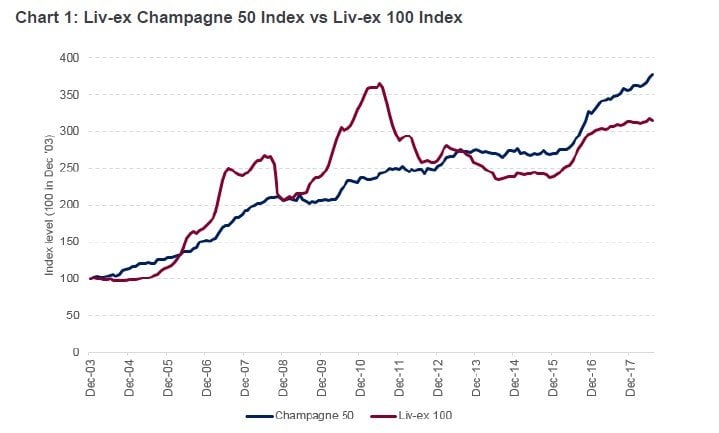 Compared to the broader market, price movements for Champagne have been steady over the past decade, without any sharp upward or downward movements. Events that affected the broader market have had little impact on Champagne. The only year that its index dipped (-0.7%) was in 2015, when the whole market was flat. Since then, it has continued to rise. Since the creation of the index in 2004, it has shown a compound annual growth of 9.52%. 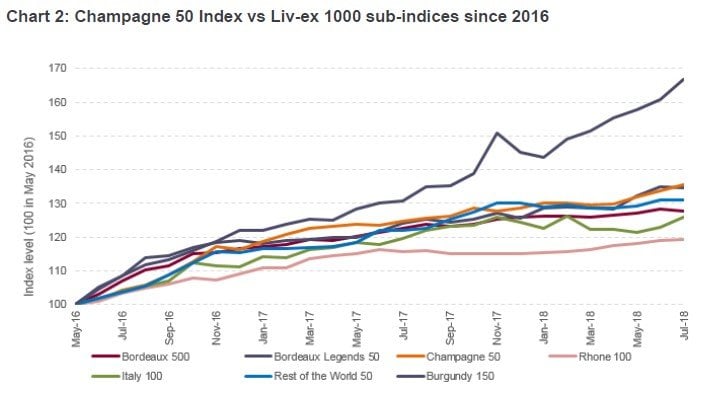 Like other Liv-ex indices, Champagne received a boost from sterling’s devaluation following the Brexit referendum. Euro and dollar buyers took advantage of the weaker pound, stimulating the market and pushing the indices, calculated in Sterling, higher. Since the beginning of June 2016, the Champagne 50 has gained 35.3%, making it the second-best performer in the broader Liv-ex 1000 Index. Only Burgundy, which has taken a course of its own, has done better. 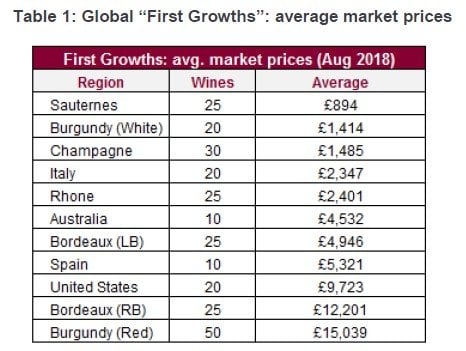 The table above shows the average price for the top wines – the “First Growths” – of the major fine wine producing regions. At £1,485 per 12x75, Champagne is lower than most other categories. It therefore offers a relatively low-cost entry point into the investment market.

A growing and broadening market 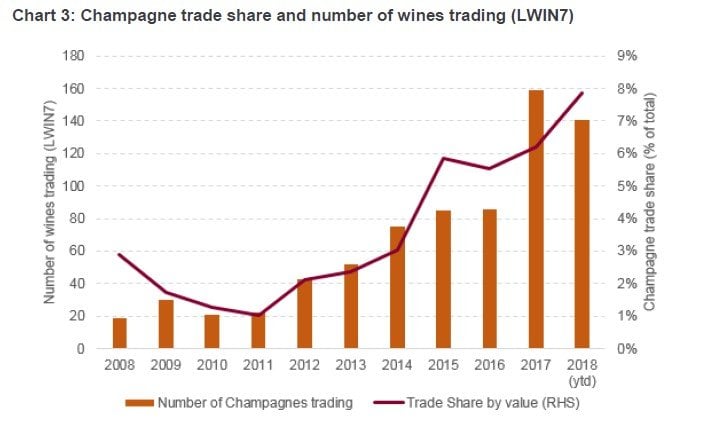 Not only is the Champagne market steady, but it is also growing. Between 2008 and 2014, the region’s overall trade share hovered between 1-3% by value, as the chart above shows. So far in 2018, it has contributed 8% of market activity, up from 6.2% last year. The number of unique labels trading has also been on the rise. Back in 2008, fewer than 20 different Champagne labels traded on the market. So far this year, the figure stands at 140. The market has thus grown in both depth and breadth.

Market participants have also shown increased commitment to the Champagne market, as demonstrated by rising exposure for the region on the Exchange. Exposure is the total value of bids and offers – firm commitments to buy or sell – on the market. The current value of live bids is ten times higher than at the start of 2015.

The bid exposure does show some seasonal variation. Typically, Champagne’s activity is at its peak at the end of summer and before the festive period, as merchants prepare for Christmas. Yet, the upward annual trend is clear. 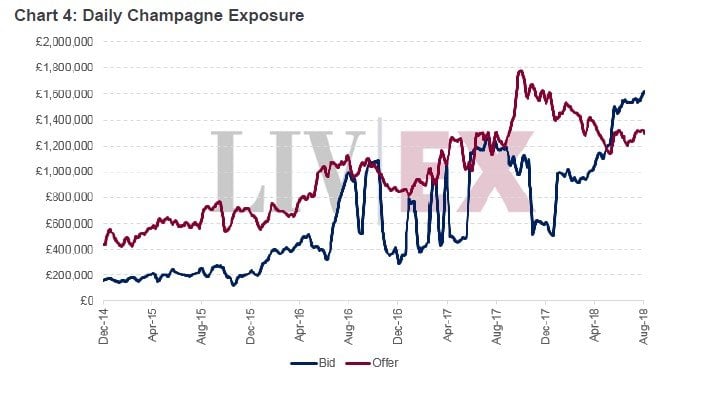 As exposure has grown, spreads have dropped. A spread is the difference between a bid and an offer on the market. In other words, it is the difference between the seller’s price and what the buyer is willing to pay at any moment in time. The smaller the gap – or the narrower the spread – the easier it is to determine an accurate price, and the easier to trade at an agreeable price, reducing the cost of trading. It follows that as the average spread drops, price discovery becomes more efficient and confidence in the market is increased.

As chart 5 shows, this is exactly the pattern seen in the Champagne market over the past three years. In 2015, spreads stood at 12-14%. By the end of August 2018, they had fallen to 9.1%. This is the second lowest for all major fine wine regions, lagging only behind Bordeaux. The fundamentals of the Champagne market have therefore been strengthening. 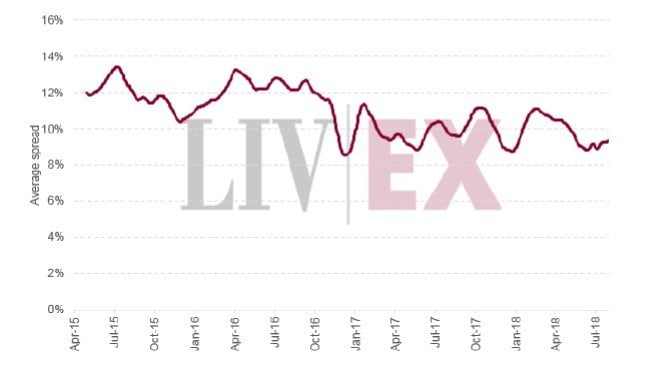 All of these factors point towards a growing interest, and increased confidence, in Champagne as an investment asset. Champagne offers a relatively low-cost entry into the fine wine market, steady returns and low volatility. More wines are being traded, exposure is rising, and price discovery is becoming ever more efficient. It now represents a serious contender to other fine wine producing regions.