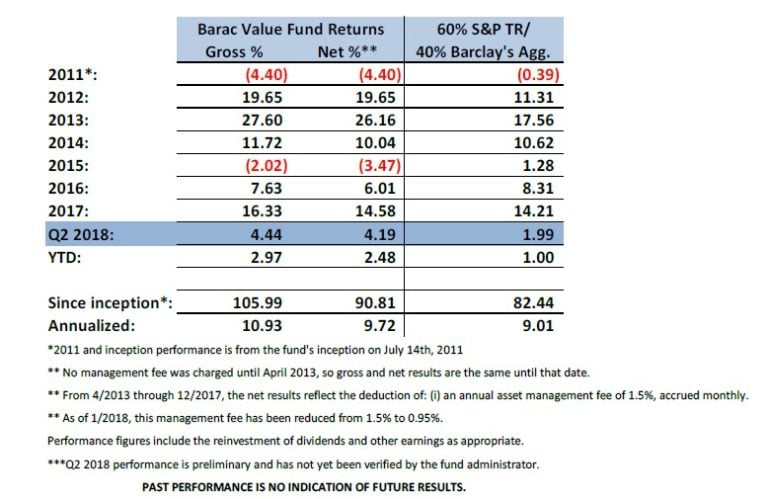 This is the Fund’s twenty-second regular quarterly report to provide updates on the Partnership’s performance. The Partnership’s Fund administrator, Fund Associates, LLC, is also generating monthly investment reports for each Partner, by directly and independently accessing the Fund’s electronic brokerage data.

For the three-months ending June 30, 2018, the Barac Value Fund L.P. (the “Fund” or “Partnership”) delivered net returns (after the deduction of management fees) of 4.2% versus a return of 2.0% for the benchmark1.

Since the Partnership’s inception (on July 14, 2011), the Fund has returned 90.8% (after deducting management fees) versus a return of 82.4% for the benchmark, resulting in relative outperformance of 837 basis points.

Gross and net annualized returns for the Fund since inception amounted to 10.9% and 9.7%, respectively, versus a return of 9.0% for the benchmark.

For the second quarter ending June 30, 2018, returns for the Barac Value Fund amounted to 4.4% on a gross basis and 4.2% on a net basis (after management fees), compared to 2.0% for the benchmark. The Fund’s quarterly performance also outperformed both the benchmark’s equity2 (up 3.4% for the quarter) and fixed-income3 (down 0.2%) subcomponents.

As always, it is important to re-state that the Fund’s returns were generated without leverage (either direct or effective leverage through options), without taking highly concentrated positions, and while conservatively holding substantial cash and/or Treasury bond positions. I also continue to “put my money where my mouth is” and most of my liquid net worth also remains invested in the Fund along with the other Partners.

Outperformance for the quarter was driven by individual security selections and I am particularly pleased with this quarter’s performance, in light of the Fund’s conservative asset class allocation. More specifically, the Partnership remained more defensively positioned than its benchmark (i.e. underweight equities and overweight defensive assets) which, itself, reflects a conservative asset allocation.

Under Armour and Roku were the biggest contributors to outperformance. As discussed in the Q1 quarterly letter, I had substantially increased exposure to both of these names during the past quarter and these incremental investments have had a considerable positive impact on performance. Not only did the share prices of each of these companies increase substantially, but they were two of the Partnership’s larger holdings.

I remain positive on the shares of both under Armour and Roku and did not reduce any exposure over the course of the quarter. The reason I remain bullish on these names -- despite the substantial increase in their valuations -- is because their share price appreciation has been supported by positive earnings reports and news flow which has justified higher valuation levels.

That said, Under Armour and Roku have now grown to account for 7% and 6%, respectively, of Fund assets-under-management (A.U.M.). Given the historic underlying volatility in the shares of these companies. and the relatively conservative targeted risk profile of the Fund4, this is towards the upper end of my (concentration) comfort level for the Partnership. As such, the positions will likely be trimmed following any substantial further valuation increases.

Over the course of the past quarter, I exited the Fund’s position in Ralph Lauren at levels 71% above where the Fund re-initiated a position in the company early last year. I also further sold down the Fund’s Target position after the shares had increased over 50% in less than a year and risk/reward dynamics have become less attractive.

Target was recently one of the Fund’s largest positions; however, after reducing exposure over the past two quarters, it now only accounts for only about 1% of Fund A.U.M. While the full investment thesis for Target (from last year) is beyond the scope of this letter, I wrote a detailed analysis on it at the time. For those who may be interested, that analysis can be found here: https://seekingalpha.com/article/4038981-target-expect-pay-less-following-sell

Other notable trades during the quarter included the exit of shares in Entravision and the initiation of a small position in Cirrus Logic. I also substantially increased the Fund’s holding in medium-term Treasuries.

Yields on 5-year treasury bonds increased further over the past quarter (increasing from 2.74% to 2.85%) -- making their risk/reward dynamics (relative to domestic stocks5, which increased 3.4%) increasingly attractive. As such, I increased the fixed-income allocation from 40% to 45% of A.U.M. (versus 40% for the benchmark).

I do remain generally cautious with regard to “risk assets” (stocks and corporate bonds). This continues to be more a result of market risk factors rather than concerns with respect to current equity valuation multiples. At the end of the quarter, I believe that the equity risk premium remains reasonable -- with a forward earnings’ yield on the S&P 500 index of 5.8%6 versus a 3.0% yield for 10-year Treasuries.

What continues to concern me, however, is the earnings part of the price/earnings equation and the increasing risk that some of the contributors to current (high) profit margins could come under pressure. Earnings’ levels continue to reflect low interest rates (and low credit spreads), low wage growth, and the positive wealth effect of 8 years of rising stock prices and home values.

As we approach full employment and some of the government’s pro-growth policies come into effect, there is a heightened risk of wage pressure and increased interest rates with increased inflation. Furthermore, current valuations appear to incorporate little with respect to geo-political risks at a time when there is much political change and uncertainty. It also warrants keeping in mind that if/when the business cycle does turn (and assets prices fall), a resulting “reverse wealth effect” could exacerbate the impact of a cyclical downturn.

For all of these reasons, the Partnership remains more defensively positioned than its benchmark (which, itself, reflects a conservative asset allocation). This is reflected in the fact that 46% of the Fund’s A.U.M. are either in cash or U.S. Treasuries with maturities less than 5 years. While a defensive positioning has constrained performance returns over the past year, I am willing to sacrifice some upside potential as capital preservation remains paramount to the Fund’s investment strategy.

To be clear, the Partnership’s defensive positioning is in place in order to mitigate against market risks and not based on the expectation for an imminent fall in equity prices. In fact, I believe that the current uptrend in the equity market could continue for a while. Furthermore, I continue to believe that the Fund’s equity holdings include idiosyncratic value opportunities (for specific stocks) that are superior to those of the equity markets as a whole.

In April of last year, Barac Capital began offering separately-managed-accounts (S.M.A.) and the offering has been successful (with assets in these accounts now exceeding those of the Fund). I started offering the S.M.A.s in order to address some of the inherent disadvantages of a hedge fund structure. While I continue to believe that the Barac Value Fund’s terms are very attractive (within the confines of a hedge fund structure), there are still a number of inherent drawbacks for many investors, including:

Because the S.M.A. offering addresses these issues and is inherently advantageous (for investors), relative to an investment Partnership (and, in this case, the fees are the same), I see little on-going incentive for an investor to choose the Fund over this alternative relationship. As such, I am currently working with the Fund’s accountant, broker, and administrator to dissolve the Fund in a tax efficient manner that won’t crystallize the unrealized gains of the Partnership (via a dissolution in-kind). I expect this process to be wrapped up in the next couple of months.