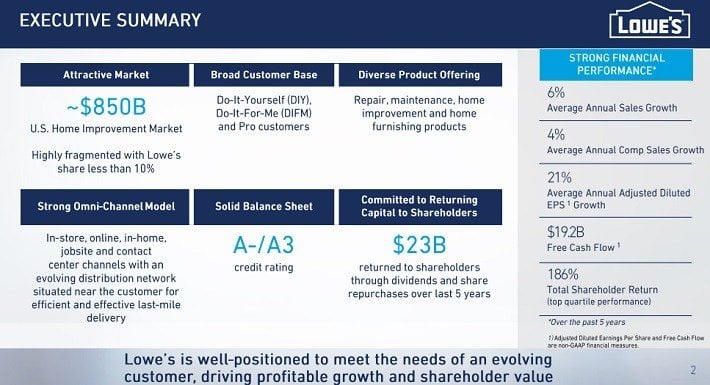 The Dividend Kings consist of many different types of companies, many of them operating in the non-cyclical consumer staples industry. There aren’t many retailers who have raised their dividend for more than 50 years in a row, but Lowe’s Companies (LOW) has managed to do just that.

The home improvement store operator has produced outstanding returns in the past, and thanks to a strong growth rate the outlook is positive as well. Lowe’s is not trading at an expensive valuation, and the dividend will get raised again in a couple of months.

Lowe’s is the second biggest operator of home improvement stores in the US, only Home Depot (HD) is even bigger.

Lowe’s as well as Home Depot target the $850 billion home improvement market in the US. Lowe’s also operates in Canada, although that side of its operations produces a significantly smaller amount of sales for the company. Lowe’s targets both pro customers as well as do-it-yourself customers. Lowe’s customer base is targeted through a multitude of sales channels: The combination of in-store, online and job-site / in-home sales allows Lowe’s to hold a significant market share in the sizeable US home improvement market. The company’s omni-channel approach also provides a strong moat versus pure online retailers such as Amazon (AMZN): Amazon can sell products online as well, but doesn’t have the manpower or the retail space to sell products in store or in-home.

Especially pro customers need the goods they purchase timely, which means that it is not a viable approach for them to order on Amazon: That would mean they would have to wait for days until the products they need for a project would arrive. Many of the goods Lowe’s sells are big / bulky / heavy, which means that they are not easily transported by a delivery service. The combination of these factors makes Lowe’s relatively invulnerable against the Amazon threat: Amazon has a much easier time in gaining market share when it comes to selling cloths, books or CDs than when it comes to selling planks, furniture, etc.

The fact that Lowe’s is one of the retailers least impacted by online competition is a big plus for investors. Another one is that the company keeps growing at a strong pace, and it will likely continue to do so for the foreseeable future.

Both the amount of homes being sold as well as the average price per home have been growing consistently over the last couple of years (with some cyclicality during each year). The US housing market looks relatively strong overall, which is a positive for Lowe’s: More homes are being renovated or upgraded either before being sold (by the seller) or after being bought (by the buyer).

On top of that Lowe’s profits from the fact that the economic situation of consumers is improving. Both disposable income as well as real (i.e. inflation-adjusted) earnings are growing. This means that more and more people can spend money on consumer goods that are being sold at Lowe’s stores across the nation.

It is thus not surprising that Lowe’s comps sales have been growing at a strong pace (4% a year over the last five years). This, combined with some store openings, has made Lowe’s top line grow by six percent a year since 2013. Higher sales, especially higher comps sales, usually also lead to growing margins, as costs are not growing as fast as revenues. The costs of operating a store remain mostly flat, but higher sales per store lead to a rising gross profit.

This operating leverage explains how Lowe’s is able to grow its earnings significantly faster than its revenues.

The very fast EPS growth rate was further pushed upwards by Lowe’s share repurchases, which have led to a significant decline in the company’s share count. As the company’s earnings are now distributed over a smaller amount of shares, EPS could grow by 136% over the last five years whilst operating earnings grew by only 84% over the same time frame.

Since the US housing market remains strong, since employment is high, and since consumers are upbeat, Lowe’s should be able to keep its comps growing. This, in turn, will result in further margin expansion and higher net earnings down the road.

If the analyst community is right, Lowe’s will increase its EPS by more than 21% a year going forward. But even if the actual growth rate would be lower, it is very likely that the growth Lowe’s will experience over the coming years will be compelling.

Lowe’s has many advantages versus online competitors such as Amazon, but there aren’t any significant barriers versus peer Home Depot. That is, however, not a major obstacle.

Since 1995 both Lowe’s as well as Home Depot’s returns have trounced the broad market’s returns easily. They have, coincidentally, returned almost the same amount of money over that time frame. The US home improvement / hardware retail market is big enough for two sizeable companies to earn significant amounts of money.

Since both companies aren’t focused on opening new stores, there is little risk of a price war, and there aren’t any meaningful advances by new competitors. Lowe’s is not necessarily in a better position than Home Depot, but the duopoly will likely allow both companies to remain highly profitable. It looks like investors in these companies have no need to worry about competitive pressures.

During the last financial crisis Lowe’s was hit a bit harder than some other Dividend Kings. Earnings-per-share during the Great Recession are below:

From 2007 to 2010 Lowe’s operating profits dropped by roughly 22%, and it took Lowe’s until 2015 to get profits back to pre-crisis levels. Unlike many other companies Lowe’s avoided net losses completely, but the impact of the last (especially harsh) recession was still considerable.

Since a housing crash as happened in 2007 is not likely in the foreseeable future, such a future risk is not considered high.

With Lowe’s excellent track record (the company has returned 18% a year since 1980) and its positive growth outlook one could expect that Lowe’s trades at a high valuation. Lowe’s trailing price to cash flow multiple is not high at all, either, as Lowe’s trades with a 7% cash flow yield right now.

This valuation looks inexpensive on an absolute basis, and especially when we factor in the high earnings growth expectations: With a PE multiple of 15.6 and an expected EPS growth rate of 21% Lowe’s trades at a PEG ratio of just 0.74. Since PEG ratios of less than one are usually considered cheap, Lowe’s looks inexpensive on that basis also.

The high growth, combined with the low valuation, also provides a good total return outlook: If Lowe’s does grow its EPS by 21% a year through 2023, share prices would grow by 12% a year — if the multiple drops down to a 12x PE ratio. Such a multiple decline is a conservative scenario, and even in that case, the total return (share price gain plus dividends) would be very compelling at 14% annually.

This shows that the outlook for Lowe’s investors is quite positive over the coming years, although the dividend yield might be a bit low for investors purely focused on income generation. Lowe’s will (very likely) announce another dividend increase in June, the dividend yield should then be above 2.0% again.

Lowe’s has a great history, regarding both earnings growth and dividend growth. The outlook for the company is positive, the valuation is low, the duopoly with Home Depot looks very sustainable and there is little threat of online competition.

Overall things are looking quite good for Lowe’s right here, and shareholders have a good chance of receiving attractive total returns over the coming years.