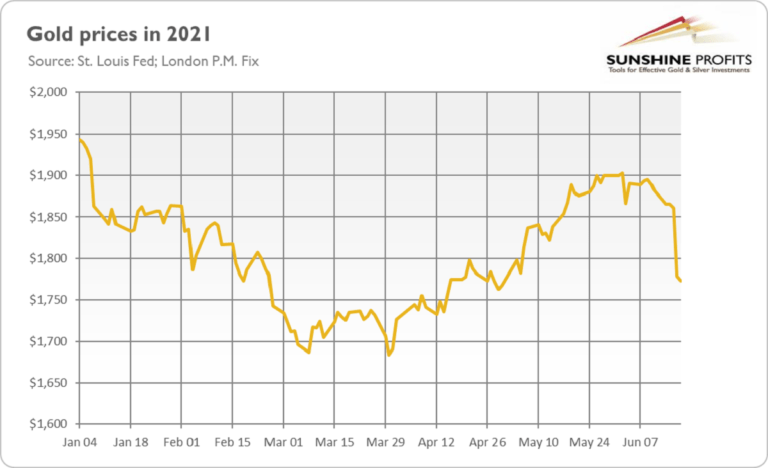 The recent Fed’s hawkish turn is fundamentally negative for gold prices but there is still some hope.

The hawkish counter-revolution within the Fed continues. On Friday, St. Louis Fed President James Bullard said that the recent FOMC shift towards a faster tightening of monetary policy was a natural response to faster economic growth and higher inflation than anticipated:

Bullard also noted that “Powell officially opened the taper discussion this week”. Indeed, in my Friday edition of the Fundamental Gold Report , I focused on the changed dot-plot , which suggested that FOMC members were ready to hike interest rates twice in 2023. However, the second major shift in the stance of the US central bank was that the Fed officials started to “talk about talking about” tapering.

In his prepared remarks for the press conference, Powell said:

At our meeting that concluded earlier today, the Committee had a discussion on the progress made toward our goals since the Committee adopted its asset purchase guidance last December. While reaching the standard of “substantial further progress” is still a way off, participants expect that progress will continue. In coming meetings, the Committee will continue to assess the economy’s progress toward our goals. As we have said, we will provide advance notice before announcing any decision to make changes to our purchases.

In plain English, it means that the Fed could announce tapering at any of its future meetings, depending on the assessment of the incoming data. However, to avoid a replay of the taper tantrum , the Fed will “give advance notice before announcing any decision”. So, September is the first probable date of a hawkish announcement about tapering of quantitative easing , which could be preceded by some clues as early as in July:

That is, you know, the process that we’re beginning now at the next meeting. We will begin, meeting by meeting, to assess that progress and talk about what we think we’re seeing, and just do all of the things that you do to sort of clarify your thinking around the process of deciding whether and how to adjust the pace and composition of asset purchases.

Another hawkish shift in the Fed’s thinking, which is worth pointing out, is that it dropped the phrase in the statement saying that the pandemic is weighing on the economy. So, although it’s still cited as a risk, Powell and his colleagues officially ceased to see the pandemic as a constraint on economic activity. It means that, as I already wrote earlier in my reports, the US economy has returned to the pre- epidemic level or has shifted from the recovery to the expansion phase.

What does it all mean for the yellow metal? Well, the Fed triggered some panic selling in the gold market last week. Actually, on Thursday, there was the largest one-drop of 2021 in response to the more hawkish stance of the US central bank, as the chart below shows. 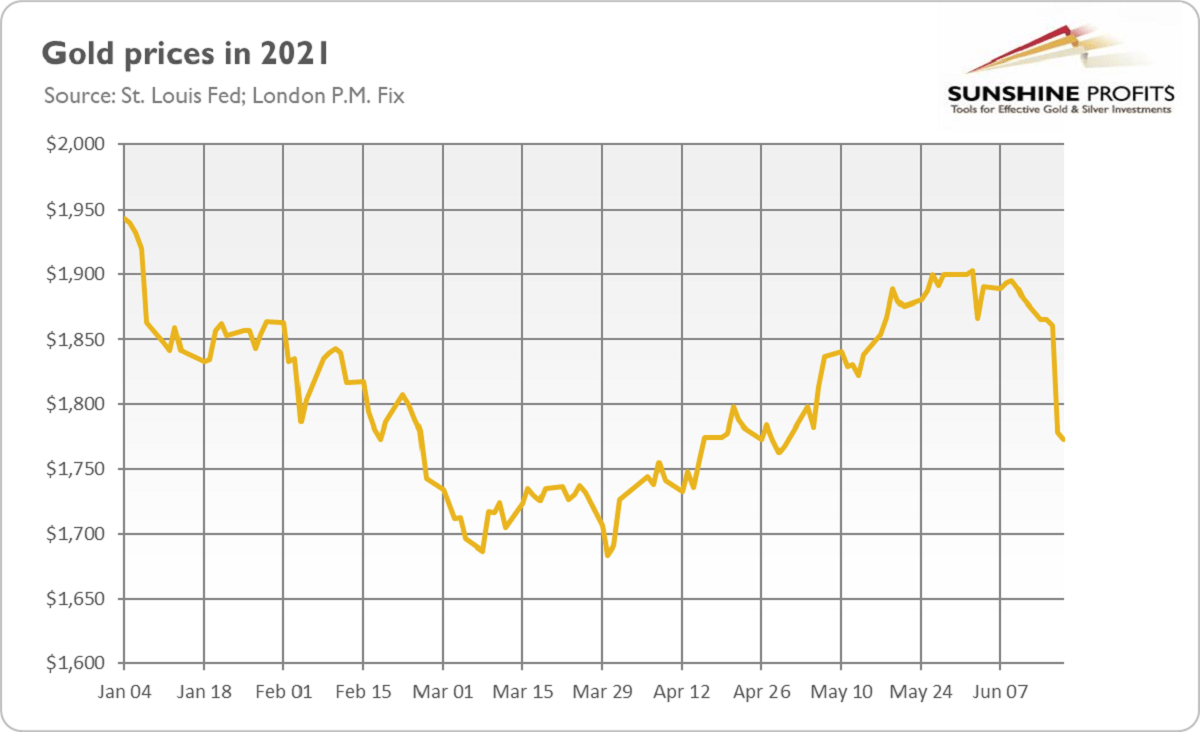 The bearish reaction is understandable, as the Fed’s readiness to reduce its asset purchases and end the policy of zero interest rates is fundamentally negative for the yellow metal . More hawkish FOMC implies higher real interest rates and a stronger dollar, the two most important drivers of gold prices. Furthermore, when the US central bank becomes more hawkish, it means that it’s more confident in the economy – and gold struggles when the economy is strong.

However, some analysts claim that the selloff was exaggerated . After all, the Fed still maintains that higher inflation is transitory; but transitory inflation doesn’t mix with earlier interest rate hikes. So, we will have either more lasting high inflation (but the Fed is slow to admit it), or the Fed doesn’t really want to increase its interest rates substantially. In both cases, gold should benefit, either from higher inflation and lower real interest rates, or from more dovish Fed than it’s currently perceived.

So, the bullish case for gold is not dead yet, but if the Fed really becomes more hawkish and determined to tighten its monetary policy (while high inflation turns out to be transitory), gold may struggle during the upcoming tightening cycle , unless it triggers some economic turmoil.