Whitney Tilson’s email to investors discussing Facebook, Inc. (NASDAQ:FB)’s earnings; the difference between a company and its stock; what are the odds that Build Back Better passes and at what scale?

At the end of October, the value investor Mohnish Pabrai gave a presentation and took part in a Q&A session at Boston College and Harvard Business School on the Uber Cannibal Investor Framework, which he has developed over the past decade. Uber Cannibals are the businesses “eating themselves by buying back their stock,” the value Read More

By any objective metric, it was a very impressive quarter: Daily and monthly active users rose 6%, revenue jumped 35%, operating margin was an amazing 36%, and operating income grew 30%. Such numbers are almost unheard of for a company of this size, which is why I continue to believe that Facebook and Alphabet Inc (NASDAQ:GOOGL) are the two greatest businesses of all time.

The Difference Between A Company And Its Stock

2) In light of my many e-mails criticizing Facebook in recent weeks, some readers might think that I was bearish on the stock – but that would be incorrect.

It's possible to be very critical of a company but still think it's a great business and that the stock is undervalued – which is exactly what my colleagues Berna Barshay, Enrique Abeyta, and I say about Facebook.

Specifically, in my October 8 e-mail, I included this excerpt from Berna's Empire Financial Daily:

With superior growth and phenomenal margins versus other stocks in the market, it's hard for me to imagine Facebook not trading at a premium multiple to the S&P 500 Index, which is currently priced at about 20 times 2022 earnings. I think Facebook deserves a price-to-earnings (P/E) ratio of at least 25, maybe even 30.

That upside justifies holding your nose and buying FB shares. They are a great risk-reward here.

I added this about Enrique's view:

Enrique thinks it's a good trading opportunity and recommended it in his Empire Elite Trader service, which you can subscribe to here – it's only $69 per month, and you can try it risk-free for 30 days.

And, finally, I concluded with my own opinion:

I'm happy to continue having Facebook's stock as a core holding in our flagship newsletters, Empire Stock Investor and Empire Investment Report... Enrique and Berna are a lot smarter than I am... so listen to them!

In summary, to be a successful investor, it's critical to set your emotions aside and distinguish between companies and their stocks.

What Are The Odds That Build Back Better Passes And At What Scale?

3) Here's another example of how important it is to set your emotions aside when making investment decisions.

The Biden administration has proposed a $3.5 trillion reconciliation bill called The Build Back Better Agenda. Not surprisingly, in these polarized times, it's highly controversial. With every Republican vowing to oppose it, it means that Democrats can't afford to lose a single vote in the U.S. Senate.

If this bill passes, there will likely be meaningful implications for the stock market overall – perhaps a short-term boost due to even more fiscal stimulus, but also possibly a long-term negative impact because of higher taxes and debt levels. And the legislation will undoubtedly affect certain sectors, such as pharmaceuticals and energy.

Many investors would like to know how likely the bill is to pass and, if so, at what scale?

Many folks would have trouble accurately answering these questions because their political beliefs would interfere (i.e., Democrats would guess high; Republicans would guess low).

To help me think about this, I turned to a New Zealand-based prediction and betting site, PredictIt, which allows people to bet real money (up to $850 per bet) on political and economic outcomes.

Here's what the market currently looks like for The Build Back Better Agenda (you can check the latest numbers here): 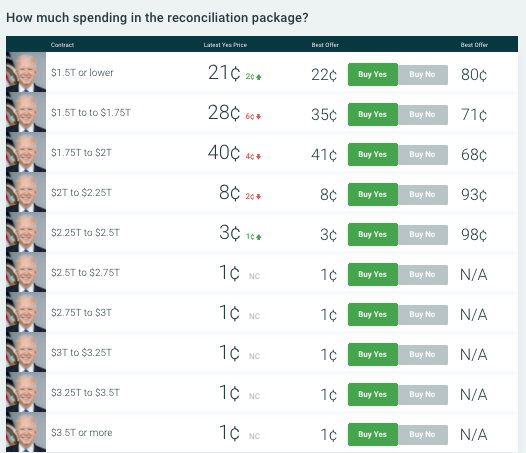 According to the rules of this market, there's about a 21% chance that Democrats fail to pass the bill or that it's smaller than $1.5 trillion...

So, this market is saying that there is roughly a 79% chance that Sen. Joe Manchin of West Virginia and Sen. Kyrsten Sinema of Arizona will end up voting with their Democratic colleagues, and The Build Back Better Agenda passes. But it's likely to be in the $1.5 to $2 trillion range, roughly half what the Biden administration proposed.

Those odds sound about right to me – which is one of the reasons why I remain constructive on the market in the near term.

4) Speaking of which, this was the first slide I presented yesterday at the 2021 Stansberry Conference & Alliance Meeting in Las Vegas:

5) I then went on to present my thesis that the future of education is digital.

It's a sector that's close to my heart. My parents are both teachers who met and married in the Peace Corps. My first job out of college was helping start Teach for America. I co-founded a political advocacy group that pushes for education reform, and I've been on the board of KIPP charter schools in New York City for the past two decades.

So I know what I'm talking about when I say that the American education system is broken – as evidenced by the $1.7 trillion in outstanding student loans held by around 45 million Americans (the average student debt is around $38,000).

What's more, student debt will likely surpass $2 trillion in the next year as tuition hikes continue to outpace inflation... up from already stratospheric levels of $27,000 per year at public institutions and $55,000 annually at private institutions.

To address these out-of-control costs, I recommended three stocks that I believe are best-positioned to benefit – all of which are recent recommendations in Empire Investment Report (you can learn more and subscribe to it here).

I can't reveal the names, as those are for our subscribers, but here's an overview...

Textbooks are a small portion of the massive cost of higher education... but it's showing the way to how education can be digitized. And one college textbook company is at the forefront of digital distribution, which is a lot cheaper – for everyone – than buying bulky textbooks at the college bookstore. The stock I discussed generates margins in its digital distribution business that are twice that of its old-school way of selling textbooks.

Best of all, the company is only in the early stages of rolling out its model. Last year, the company's digital distribution was just a dozen schools covering 43,000 students... but this year, it's twice as many schools, serving seven times as many students. Even now, it's accessing just 5% of the more than six million college students that represent the company's total potential customer base.

I think the stock is "incredibly cheap" from a valuation perspective... and think that it "definitely has multibagger potential."

The second company I pitched is one of the leaders in online learning. Its platform is used by more than 150 colleges and universities, which offer video lectures, course certificates, and, increasingly, degrees.

But the biggest growth area, where revenue jumped 69% last quarter, is the enterprise segment, selling to businesses, which are using this platform to train their current and future employees.

Online learning is now enabling anyone, anywhere in the world, to access an education that can lead to a wide range of jobs.

I think the stock could more than double in the next two years.

Lastly, I talked about a textbook rental company that's developed a "Netflix-like (NFLX) subscription model," helping students understand the content in the textbooks.

Over the past five years, the company has beaten Wall Street analysts' revenue expectations every single quarter.

I expect it to continue, leading to a 72% share price gain in the next two years.