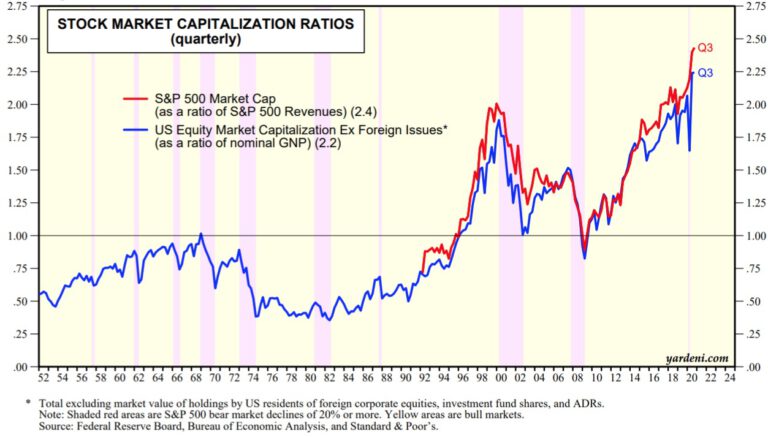 Stanphyl Capital commentary for the month ended December 31, 2020, discussing the changes to their short book, replacing QQQ with ARKK and a new position in Spok Holdings Inc (NASDAQ:SPOK).

Although this was our fourth consecutive “up month” after a lousy first two-thirds of the year, as in November I found it to be disappointing, as without our short positions the fund would have been up considerably more. As noted last month, Zero Hedge recently calculated that central banks are adding liquidity at the rate of $1.2 billion every hour with a lot more to come, and fighting that (as a friend once said) is like playing poker against a guy with a chipmaking machine in his lap—whatever bet you make, he calls. Yet the moment stocks begin to fear the PE multiple-crushing inflation we may already be seeing (and they will, as more people are vaccinated and the velocity of all the newly printed M2 accelerates) it will be game-over for this giant stock bubble, while many prices are so stretched (the current trailing GAAP PE ratios for the S&P 500 and Nasdaq 100 are 40 and 39 respectively) that myriad exogenous events (both “known unknowns” and “unknown unknowns”) could pop this market regardless of near-term inflation fears or the Fed’s actions. Thus, as much as I hate losing money on short positions I sleep much better at night knowing we have them.

One important change I made to our short book in December was to swap its primary position—being short shares of QQQ, the Nasdaq 100 ETF—into short shares of ARKK, an ETF consisting of the most execrable story-stocks on Nasdaq—a collection of companies with a blended PE of “infinity.” ARKK is today’s equivalent of the Internet bubble funds of 1999-2000, and we know what happened to those.

Although it’s great news that we now have several COVID vaccines that work, stocks are extremely expensive based even on the 2019 earnings to which they likely won't return until at least 2022; in other words, it's not as if stocks "washed out" with the economy, so how much more can they move once the economy recovers? Courtesy of Yardeni Research we can see that the S&P 500’s ratio of price-to-sales and the overall stock market’s ratio of price-to-GNP are the highest they’ve been in modern history… 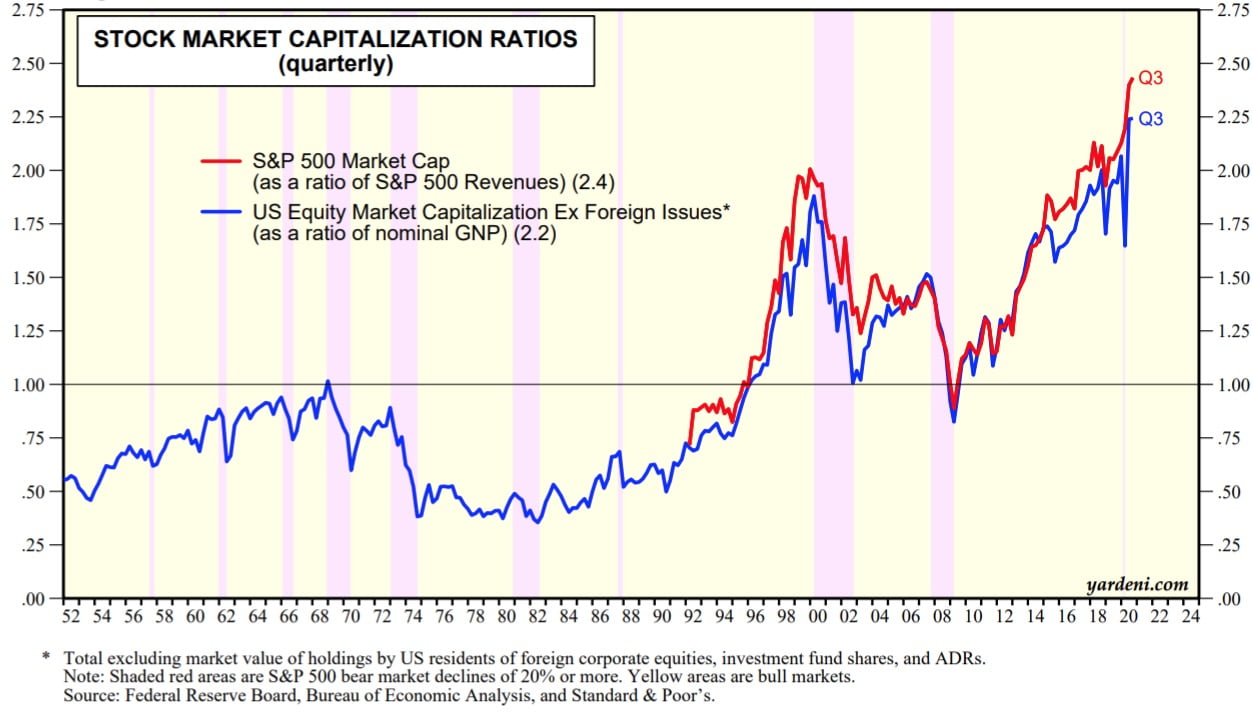 …while Tobin’s Q ratio of stock prices relative to the replacement cost of their underlying assets shows the same thing: 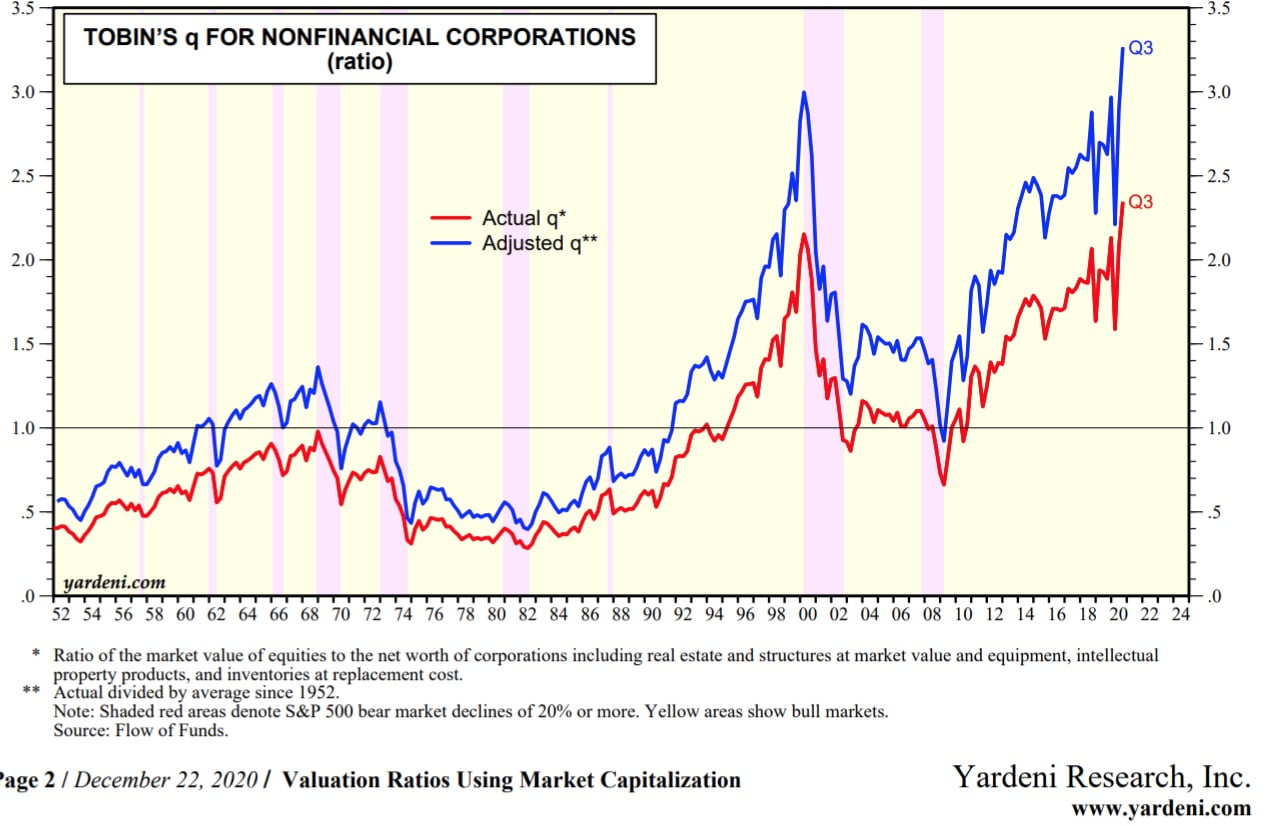 And when the economy does recover, here’s the insane amount of debt it faces; the only solution for this is the aforementioned PE multiple-crushing inflation: 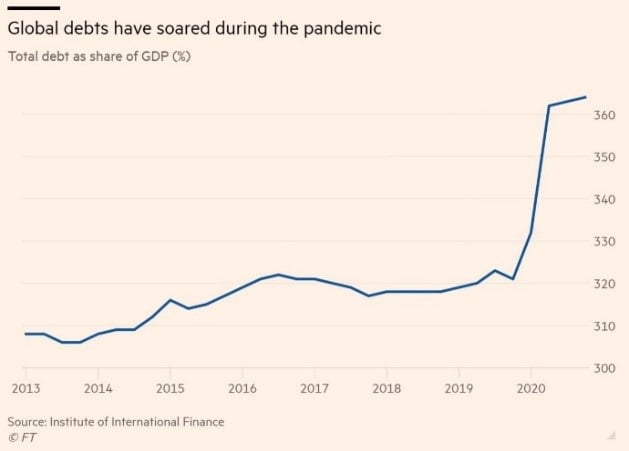 Here then are the fund’s current positions, beginning with the longs; please note that we may add to or reduce position sizes as stocks approach or recede from our target prices…

New to the fund this month is a position in Spok Holdings, Inc. (SPOK), which is not a pointy-eared half-Vulcan on the Starship Enterprise, but a slowly fading (by around 5% a year) high-margin medical paging company combined with a high-margin medical software company that management is trying to grow. Overall, Spok is an 83% gross margin company with a great balance sheet (roughly $4/share of net cash) and a ton of recent insider buying, and the roughly $10/share we paid for it was less than 0.8x run-rate revenue. A valuation of 5x revenue for the software business (if management gets the growth it seeks) plus 1x revenue for the paging business would value the stock at over $25/share. Meanwhile, at our cost the company pays roughly a 5% dividend yield.

We continue to own Data I/O Corporation (DAIO), a manufacturer of semiconductor programming devices, which in October reported a solid Q3 2020, with revenue of $5.9 million, up 55% (!) from the cyclically low year-ago quarter and 25% (!) sequentially, with a 55% gross margin, a GAAP loss of less than $200,000 excluding a one-time Chinese dividend withholding tax and a foreign currency transaction loss, and $13 million in cash with no debt. This company is a great play on the increasing electronic content in cars—particularly hybrids and EVs—and a great buy-out target. An EV of 2x $30 million in average annual revenue would put the stock at around $8.70/share.

We continue to own Evolving Systems, Inc. (EVOL) a small telecom services marketing company that in November reported an excellent Q3, with revenue up 8% sequentially and almost 11% year-over-year. (Note: I cut our EVOL position size in late-December when some tweeting day-traders ran up the stock on nonsense; I subsequently added back to the position at lower prices.) This is a 68% gross margin software company that at an EV of 2x $27 million in run-rate revenue would sell for over $4.50/share. Alternatively, EVOL now generates around $2 million/year in free cash flow and would make a great buy for a strategic acquirer, as $1 million/year in savings from eliminating the cost of being a standalone public company would raise FCF to around $3 million/year. Thus, at an acquisition price of 15x post-merger FCF, a buyer would be paying around $4/share on an EV basis.

We continue to own a reduced position in Aviat Networks, Inc. (ticker: AVNW), a designer and manufacturer of point-to-point microwave systems for telecom companies, which has recently been a very big winner for us. (We’ve now booked most—but not all—of those profits.) In November Aviat reported a fantastic Q1 for FY 2021, with revenue up 13.1% vs. the year-ago quarter and both earnings and EBITDA up hugely, with management guiding to meaningful growth on both the top and bottom lines for all of FY 2021 (which began in July). 10x $20 million in adjusted EBITDA (the midpoint of this year’s guidance) + $36 million in net cash + a $30 million valuation on over $600 million in domestic & international NOL carryforwards would make AVNW a $48 stock. Alternatively valuing Aviat as a potential buyout candidate, its closest pure-play competitor Ceragon (CRNT) sells at an EV of approximately 0.85x revenue. If we assume $250 million in annual revenue (the midpoint of guidance) for Aviat, $36 million of net cash and a heavily discounted (due to change in control limitations) $10 million valuation on the NOLs, we get an acquisition valuation of 0.85 x $250 million = $213 million + $36 million net cash + $10 million for the NOLs = $234 million divided by 5.5 million shares = $47/share. A 20% “control premium” on that 0.85x multiple would put the price at around $54.

We continue to own a very small position in Communications Systems, Inc. (ticker: JCS), an IOT (“Internet of Things”) and internet connectivity & services company, which in October reported Q3 revenue up a very nice 26% from COVID-affected Q2, albeit still down 11% from Q3 2019 (a quarter that was juiced by an extremely large one-time contract). Impressively, JCS shifted from recent large losses to a slight net profit, while gross margin was a very decent 43%. With $21 million of cash and no debt, an enterprise value of 1x run-rate revenue for JCS would value it at over $7/share; I don’t own more because management is acquisition-minded, which I read as “potentially blowing a beautiful balance sheet on something stupid,” and financially strapped municipalities may not buy its “smart cities” products for a while.

Finally on the long side, as central banks increase their money-printing to ever higher levels in order to fund multi-trillion-dollar annual deficits, we continue to hold long positions in the silver and gold ETFs (SLV and GLD); the likelihood of post-COVID negative real interest rates for years to come adds a substantial tailwind to these positions, while silver (which is now the larger of the two positions for us) is also a major component in the solar cells the Biden administration is expected to heavily subsidize.

Thanks, stay healthy, and here’s to a much better 2021 in every possible way!