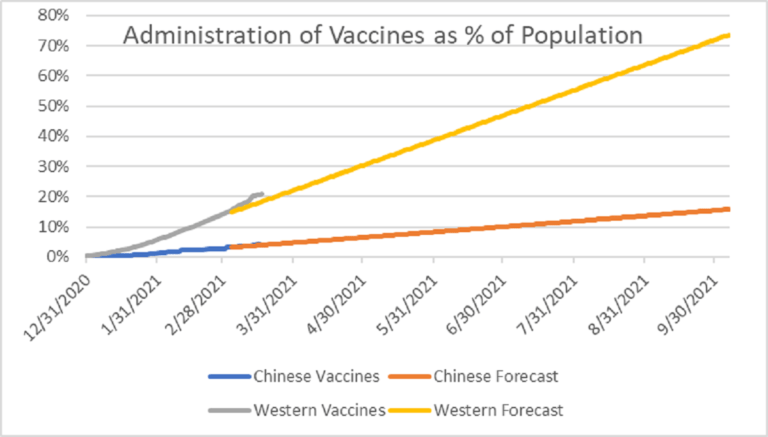 A couple of weeks ago we highlighted the incipient trend of higher ‘Western’ vs. Chinese vaccinations.  As stated in that note, we have monitored the trends and we have more confidence in our assertion: Western nations should reach +70% immunity by August 2021 while China and its vaccine purchasers will only reach 15% by the same time.  Assuming six months of immunity, there will be an insufficient number of Chinese vaccinations to allow those economies and tourism (8-11% of GDP) to resume.  Below is a chart of vaccinations as a percent of population and our forecast: 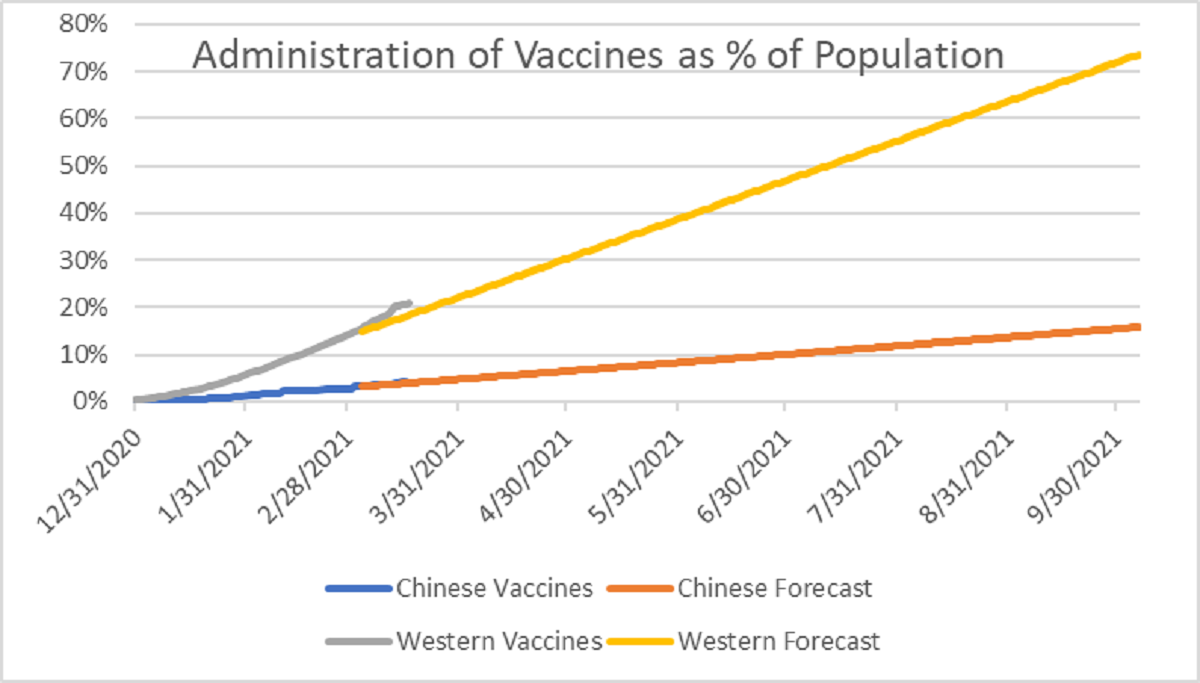 Notice that our trend in Western vaccinations may be too flat.  This could imply a faster and earlier economic recovery for Western nations. 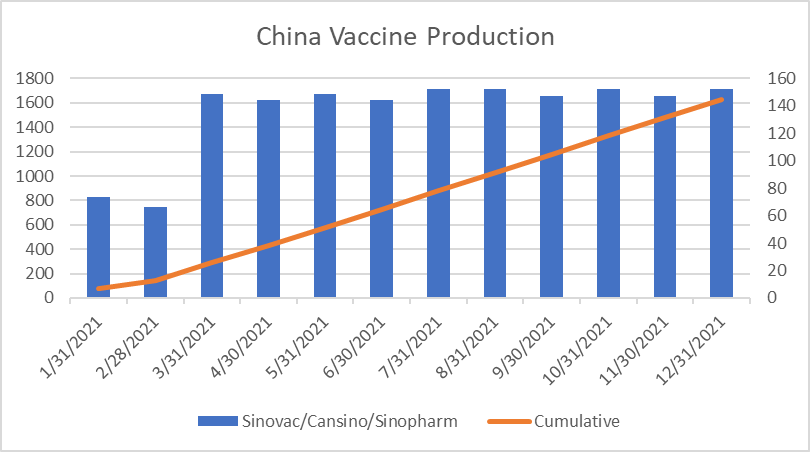 Below are the latest vaccinations for countries that have agreed to buy Western or Chinese vaccines (Israel is allowing foreign nationals to get vaccinated):

Below is GDP by country and analysts’ forecasts for 2021:

However, looking at tourism as a percentage of GDP, we see:

According to CGTN (https://news.cgtn.com/news/2020-03-11/China-s-total-tourism-revenue-in-2019-reached-6-63-trillion-yuan-OLDZXQvVXG/index.html), Chinese tourism revenue topped 6.63 trillion yuan (roughly 1 trillion USD) in 2019.  In 2020, domestic travel was down 25% YoY according to domestic airline passenger data.  While we saw a strong recovery from April-Sept, since then we have seen another slowdown.  Furthermore, tomtom.com mobility indicators already point to decreases YoY in congestion.  Therefore, we believe it is unlikely that travel/tourism in China will return to pre-crisis levels.  As a result of sluggish vaccinations and mobility, we should see tourism’s contribution to GDP up marginally YoY if that.  Accordingly, we disagree with analysts’ estimate for Chinese GDP of +8.4%.  We see something closer to 4-6% on slower tourism alone. 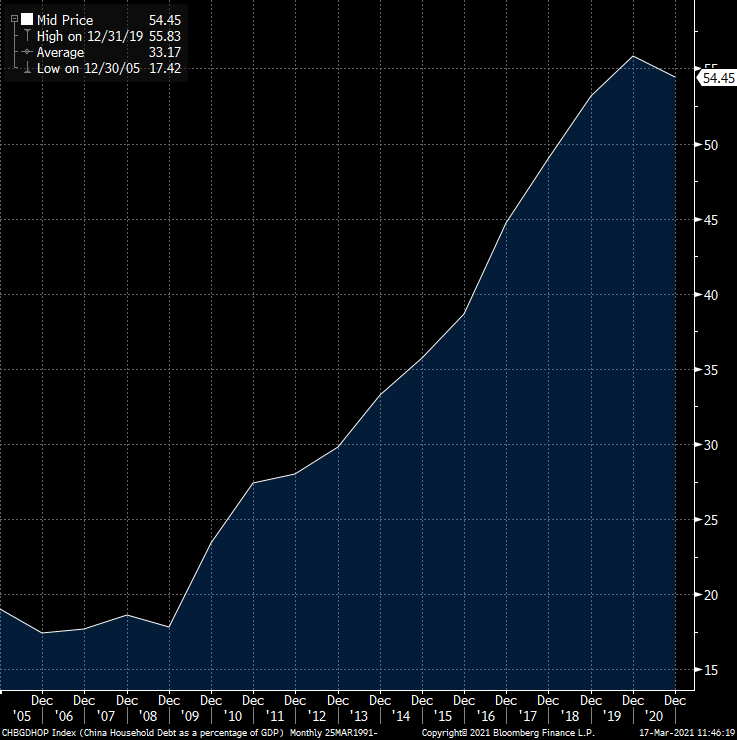 Looking closer at bond issuance of banks/financial service companies, we see that these companies have issued over 1.1trilion USD in debt in the last 10 years: 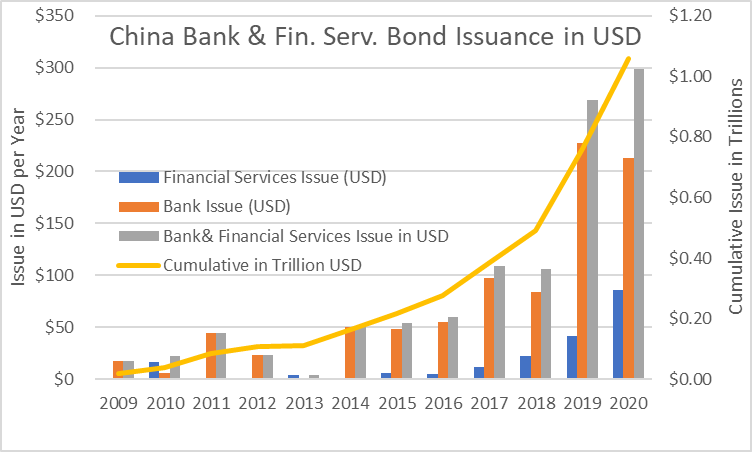 You may have noticed the headlines around Ant Group or Tencent over the past couple of months.  These companies serve as intermediaries between borrowers and lenders and receive fees for doing so.  I.e., Ant Group and Tencent have an incentive to find borrowers.  So, we have new credit issued to lend to borrowers for consumption.  However, in the last year, the borrowing could be going to something far more dubious: mortgage payments.  According to the 12/31/2020 SCMP article, “China's new microlending curbs do not address underlying issue of household debt and borrowing, analysts say”, nearly half of newly issued debt was used to pay mortgages.  If true, this suggests that homeowners are already struggling with payments. 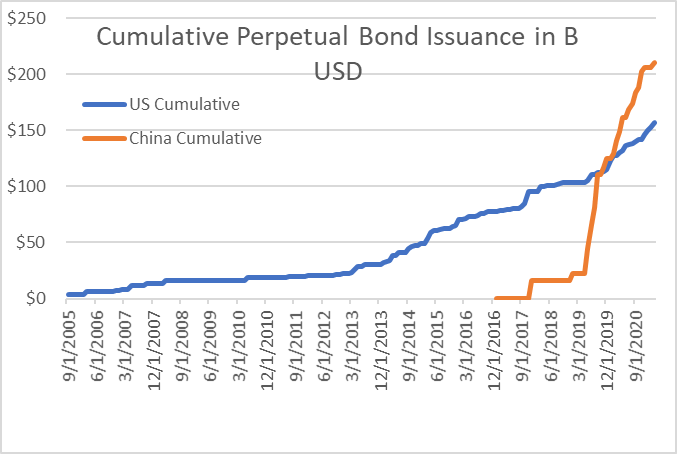 Notice that Chinese banks have issued over 200b USD in perpetual bonds in three years where US corporates have issued 150b USD in 15 years.

Putting everything together, we see rapid expansion of debt and a gloomy outlook that Chinese households will be able to service their debt.  Furthermore, an increase in yields could exacerbate and accelerate problems for the Chinese borrowers.

The result for us, is a weaker yuan.  Most likely these loans sour and the PBoC will remove them from banks’ balance sheets by increasing M2, thus devaluing the currency.  Alternatively, the Chinese government could look to accelerate exports by devaluing.

In this scenario, we see lower commodities prices as China could afford to de-stock and slow imports.

Should the Chinese economy slow, we see soybean demand down to 95 million metric tonnes (MMT) vs. the USDA’s last estimate at 100MMT.  This, coupled with a more-than-adequate pipeline, could result in an extra 1.5MMT of beans back on the world market by drawing down the pipeline.  In this scenario we see downside to US bean exports, something that we are seeing in lower vessel line-ups.

Similar to soybeans, China has re-stocked crude oil with an estimated increase of 5mm bbls YoY and an increase of 15mm bbls over 2019.  In the slower economy scenario, we see Chinese crude oil demand down 1.3mm bpd.  Longer term this would affect the US crude oil balance sheet but at this time we have not made any changes.  However, as we get more confident in a Chinese slowdown/weaker yuan, we could make further adjustments to our US SnD resulting in far lower prices ($35-40USD/BBL) in the second half of 2021.

Below are select price model targets from our Dec 2020 Outlook and current targets: