Home businesses nearly DOUBLED during the pandemic, seeing a 72% increase in side hustles worldwide!

A brand new study by Money.co.uk has revealed which side hustles are dominating the world and where.

More and more people are increasingly trying their hand in entrepreneurship, investing their time in turning hobbies into profitable businesses. However, some cities and industries are thriving more than others.

Using Etsy store data, this study looks at where in the world side hustles are thriving the most and the products that are booming among online consumers. 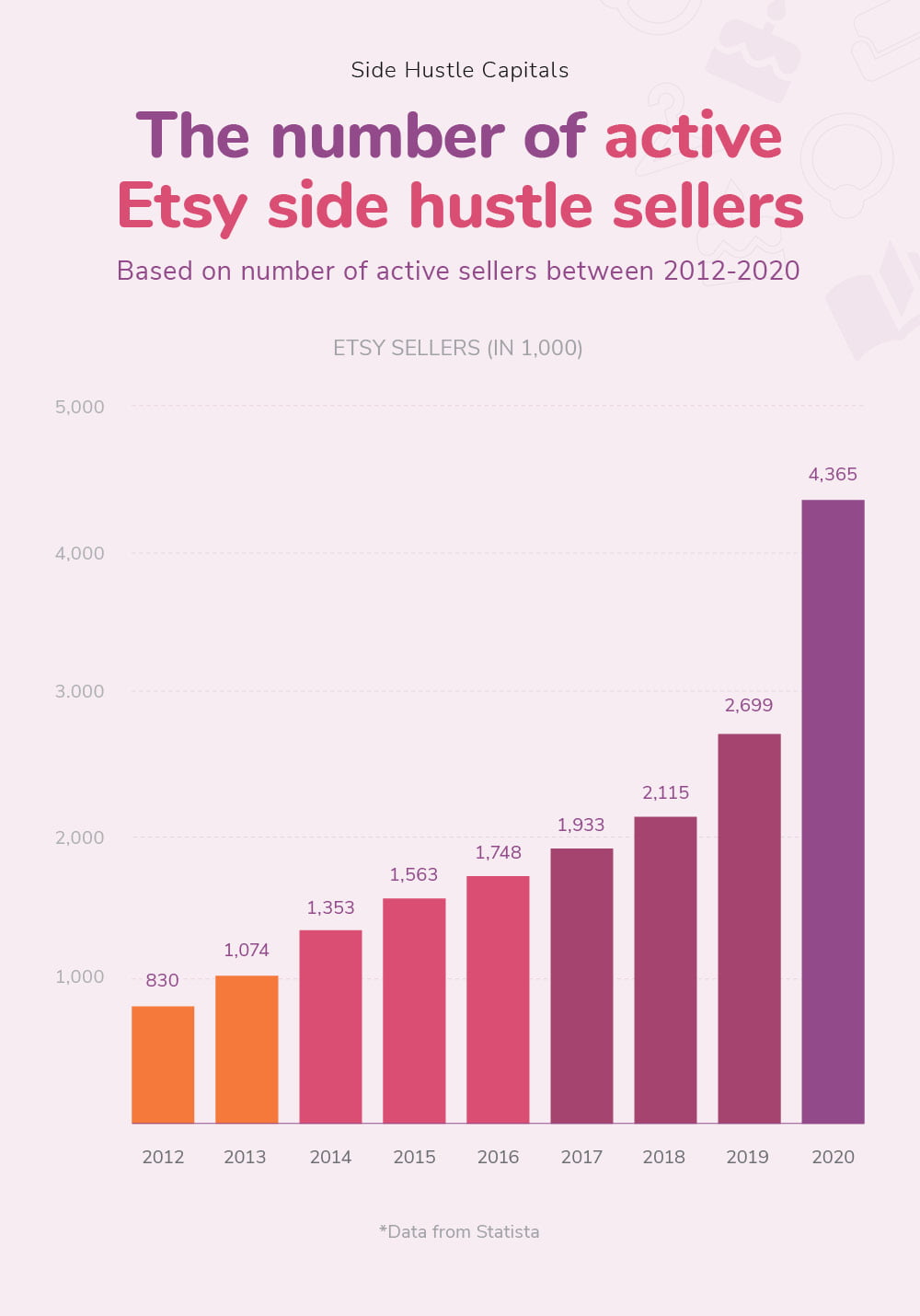 In light of a worldwide pandemic, unprecedented job losses and furloughs, the number of active selling accounts on Etsy almost doubled in 2020, with many people deciding to set up their own businesses.

In 2019 there were 2.69 million active accounts on the site, however, by 2020 the number shot up to 4.63 million as many people decided to turn their side hustles into full-time work.

Evidently, many of the big cities such as London and New York thrived in at-home businesses as a result of the pandemic. As many city businesses furloughed staff or cut jobs, it gave people a greater opportunity to explore their own business ventures and created a new age of entrepreneurship that thrived within cities around the world.

London has the largest number of Etsy listings in the UK, with over 1.1 million products being sold online. The most popular business in the city is home and living products, from the likes of wall art to cushion covers with 326,430 listings within this sector, then in jewellery and art and collectibles.

These new businesses are bringing in huge amounts of revenue to local economies, and with each product averaging £10.57 per item, these side hustles are contributing on average £11 million to London sellers, making London a side hustle hotspot.

Manchester and Birmingham are also booming with entrepreneurs, claiming the second and third highest number of Etsy listings in the UK. Again, home and living businesses trump all other categories in these UK cities with 68,145 listings in Manchester and 38,681 in Birmingham. However, Manchester has a larger art and collectible scene compared to Birmingham, which contributes to the economy within the jewellery sector.

The UK cities with the most side hustles

New York is the side hustle capital of the world!

New York has the largest number of Etsy listings than anywhere in the world, with 2.9 million in total. With an array of listings in every category, New York City is a side hustle hotspot and contributes on average $43.8 million (£31m) to Etsy sellers, helping to bring both money and business to the economy.

Los Angeles and Houston also have side hustles that thrive outside of the home and living category. The most popular Etsy business in Los Angeles is in art and collectibles with 357,175 listings, meanwhile, the jewellery business is thriving in Houston with 99,296 listings in the category.

Home and living businesses are the MOST popular side hustles in the world!

Home and living stores are the most popular category of business on Etsy, with 25% of all Etsy sellers having listings in this category.

The types of products found in home and living stores can range from furniture and plates to candles, allowing all aspiring interior designers and craftspeople the freedom to put their work into the world.

Meanwhile, jewellery is the third most popular with 15% of Etsy sellers having listings in this category despite being the most popular side hustle in 16 countries. 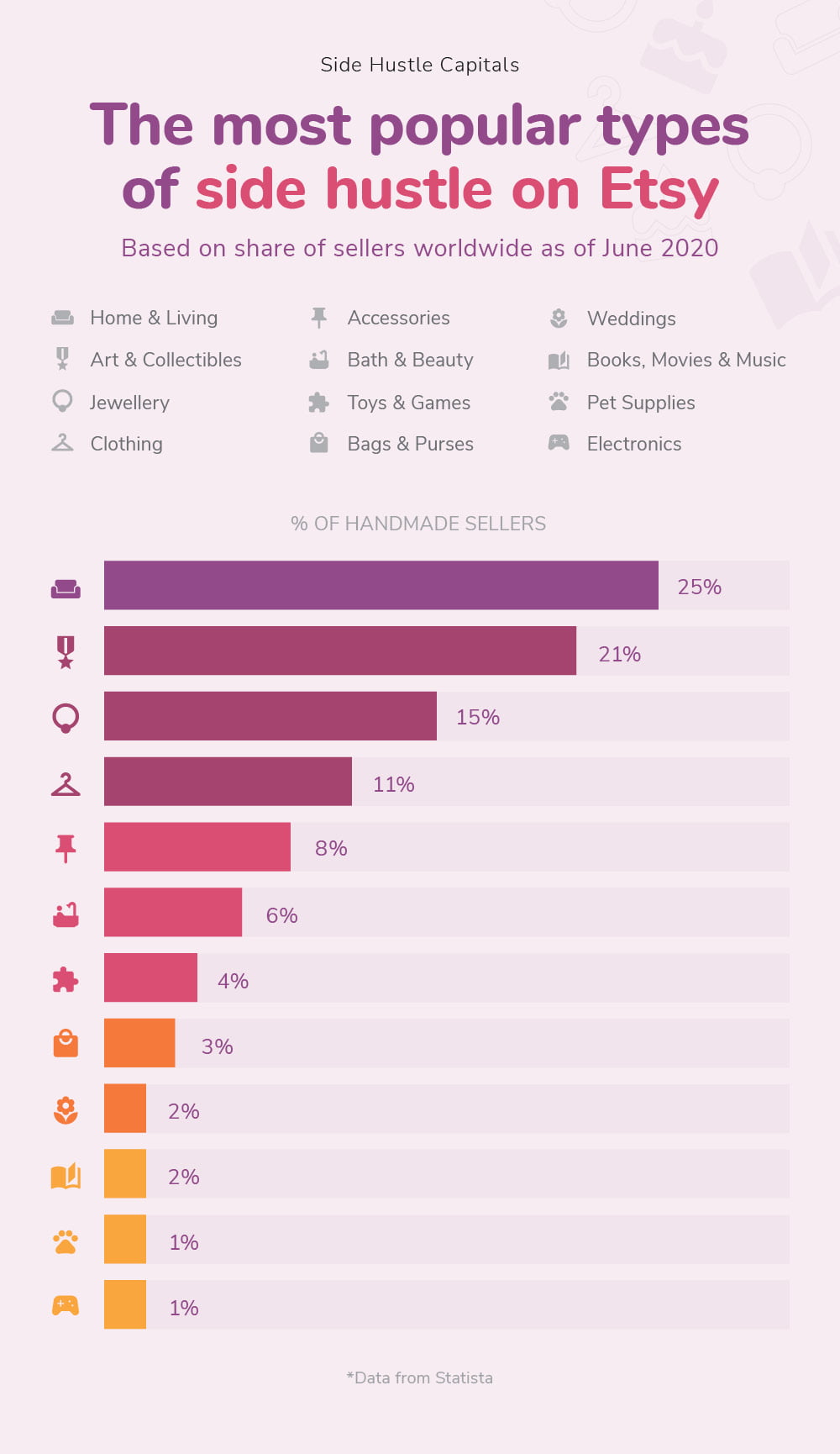 About Money: Money.co.uk is a UK-based price comparison website launched in 2008. It compares financial products including credit cards, bank savings, and mortgages.

Etsy.com has been used to gather data on 100 of the most populated cities worldwide, for the number of listings in each category, per city.

[1] The projected earnings of each city has been worked out from an estimated $15 average per item which is the average base of an online order according to Shopify. This number was then multiplied by the overall number of listings in each city.

Additional data on the increase in number of Etsy stores, and the overall number of sellers in each category was gathered from Statista.