ValueWalk
Home Business Revisiting Tesla’s Addition to the S&P 500: What’s the Cost, Before and... 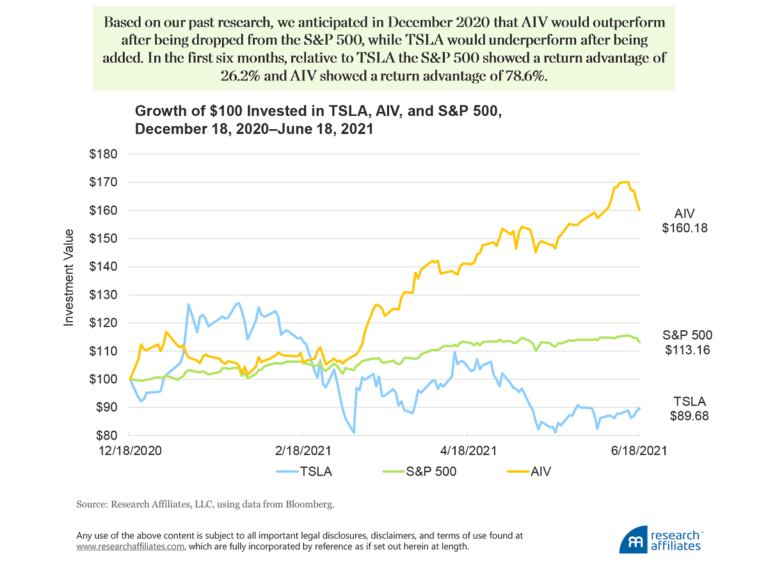 Rob Arnott is the corresponding author.

We and others have often observed a pattern in additions and deletions to the S&P 500 Index: typically additions underperform and deletions outperform the index in the subsequent year. The larger the addition to the S&P 500, the larger the average gap in subsequent relative performance. It has happened yet again with the addition of Tesla (TSLA) and the deletion of Apartment Investment and Management (AIV). In early December 2020, in our article “Tesla, the Largest-Cap Stock Ever to Enter S&P 500: A Buy Signal or a Bubble?,” we made the additional point that Tesla already sported bubble-level valuations, priced at more than 120 times when compared to the traditional automakers on a per car basis. Historically, companies at bubble valuations significantly underperform the market… eventually.1 Taking these two observations together, we predicted that AIV would outperform TSLA, perhaps by a stupendous margin because of Tesla’s scale and valuation levels.

Tesla entered the S&P 500 on December 21, 2020. Six months after the fact, what has happened? AIV outperformed TSLA by a stupendous margin.

Index funds are often thought to be passive. Not entirely—stocks are added and dropped, and rebalancing trades are made as company float changes. Although turnover is low, that turnover follows a consistent pattern: index funds systematically buy high and sell low. The recent addition of Tesla to the S&P 500 near its highest-yet valuation levels is a striking confirmation of this pattern. As the following chart vividly shows, our expectation of underperformance by TSLA and outperformance by AIV, as we stated six months ago, was right on target. As of the close on June 18, 2021, AIV has delivered 60 cents on a dollar invested compared to TSLA’s loss of 10 cents on a dollar invested, a relative return advantage for AIV of 78.6%.2

How much did the S&P 500 rebalance into TSLA cost investors? If a hypothetical investor did not rebalance into TSLA and held the S&P 500 at the pre-rebalance allocation, the investor would have been 41 basis points (bps) ahead of the rebalanced S&P 500 in the first six months after the rebalance, and likely that return advantage is not the end of the story.3 A pensioner with a $100,000 allocation to the S&P 500 is about $410 poorer as the result of the December 21 index rebalance. Unfortunately, this cost is totally unnoticed by investors because it is baked into the index’s performance. Ironically, the competition in the indexing space runs for these fractions of basis points. The cheapest funds offer the index’s portfolio allocation for an expense ratio of zero (!) bps.4 Yet, many investors totally ignore the hidden costs associated with indexing, which can easily exceed the expense ratio!

Traditional indices embody built-in performance-dragging inefficiencies. Cap-weighted indices allocate capital proportional to a company’s capitalization. For example, the S&P 500 holds approximately 500 of the largest US companies by market capitalization (corporate actions cause drift above and below 500 names) and weights them in proportion to their float-adjusted market values. It is self-evident that if a company’s stock is overpriced relative to long-term future fundamentals (hence destined to eventually underperform), it will be overweighted in the index relative to its eventual fair-value weighting. Conversely, an undervalued stock (destined to outperform) will be underweighted in the index. This observation is not a criticism of the people or the products at S&P. It is simply inherent to price- or capitalization-weighting.

Indexers cheerfully admit this truism, while noting that no one can know which companies are over- or undervalued (although recent examples of valuation extremes, such as GameStop and Nikola, certainly bring the whole notion of market efficiency into question, yet again). But, knowing which stocks are cheap and which are dear turns out to be irrelevant.

On average, company valuation multiples mean revert toward market and sector norms. In an efficient market, this reversion to the mean happens as fundamentals catch up with price: expensive and cheap stocks sport exactly the premium or discount, respectively, that they deserve. In an inefficient market, at least some of this mean reversion happens through the opposite dynamic as price reverts toward fundamentals. This higgledy-piggledy tendency toward mean reversion produces a return drag on a capitalization-weighted portfolio relative to any strategy that does not link weight to price or to market capitalization (Treynor, 2005).5

The buy-high, sell-low dynamic is particularly evident when we analyze the additions and deletions to the S&P 500. On average, over the last 20 years, 23 stocks have left and 23 have entered the index each year. About 58% of the deletions result from a corporate action such as a merger, acquisition, or bankruptcy, leaving the Index Committee little choice but to delete them. The stocks that then entered the index typically had recently experienced significant price appreciation relative to the rest of the market, ranking on average in the top 330 names by market capitalization. If corporate actions do not trigger a deletion, the Index Committee will choose a discretionary deletion, typically removing smaller companies that have recently fallen in price. We might oversimplify by suggesting that additions are typically stocks the committee wishes it had included sooner, and deletions are stocks the committee is embarrassed not to have dropped sooner.

Our 2018 article “Buy High and Sell Low with Index Funds!” suggests several ways index funds could add a modest excess return in most years. The industry, however, has trained clients to view any tracking error relative to the published index (including positive tracking error!) as evidence of inferior, sloppy risk management. Index fund managers who seek to take advantage of these inefficiencies lose business because their positive tracking error is taken to be evidence of sloppiness. The saving grace for indexers is that the stocks added at too high a price and sold at too low a price represent only about 2–4% of annual turnover. Even with an avoidable 1,000 bp performance drag from the buy-high, sell-low behavior, the annual cost to clients is roughly 20–40 bps, which the clients typically do not notice because the published index itself suffers from the same drag!

As of year-end 2019, approximately $4.6 trillion of investment capital was directly tracking the S&P 500 and another $6.6 trillion was benchmarked to the index. When the composition of the index changes, the resulting trades drive up the price of the addition and pull down the price of the deletion. Only 35% of additions to the index will have a higher share price on the day the Index Committee announces the stock will be added than the effective closing price on the day they are actually added. The prices of the remaining 65% of added stocks rally between announcement date and effective date of the addition. Reciprocally, at the open on the announcement date, 60% of discretionary deletions are above the effective closing price on the day they are removed from the index. Thus, the share price of 60% of discretionary deletions falls between announcement and effective date. Over the last two decades, on average the deletions underperformed the additions by 6.2%, from the market open on the announcement date to the market close on the rebalance date.6

Typically, an additional 1.0% of underperformance follows on the first day after the addition is made as some index trackers play catch-up on trades they did not complete on the effective date. This additional 1.0% is primarily due to buying pressure from the liquidity providers who traded the stocks ahead of the rebalance as well as from trading activity on the rebalance date. Most index-tracking strategies trade en masse at the exact closing price the day before the addition officially occurs.

The index rebalance is a great opportunity… to do the opposite of what the index does: buy the deletion and sell the addition. Providing index investors liquidity and benefitting from the mean reversion of the price changes has historically proven to be an excellent investment idea.7 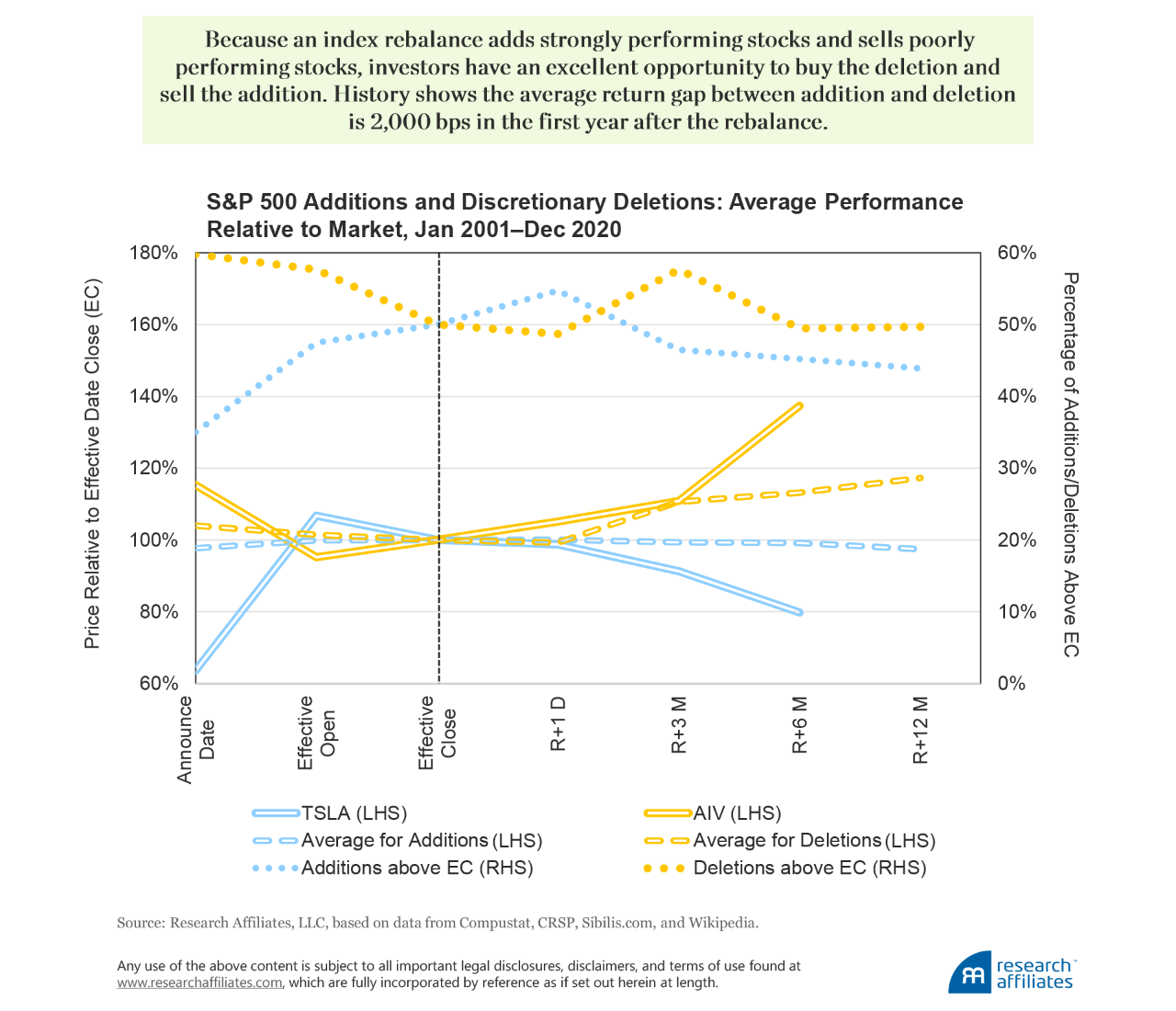 Tesla Before and After the December 2020 S&P 500 Rebalance

On November 17, 2020, the S&P’s US Index Committee announced that Tesla would be added to the S&P 500 Index. Tesla’s entry was remarkable on multiple dimensions:

Tesla entered the index in a single shot at the market open on Monday, December 21, 2020. To track the index, investors needed to trade TSLA on the preceding trading day, Friday, December 18. Over the 10 trading days prior to December 18 (excluding the December 18 value), the average dollar-volume traded was $33 billion. On December 18, the dollar-volume traded spiked to $154 billion, the equivalent of 23% of total Tesla shares outstanding. Because the bulk of strategies that track the S&P 500 purchased Tesla on December 18, typically at the closing price, for much of the subsequent analysis we use TSLA’s market close on December 18 as the reference price. 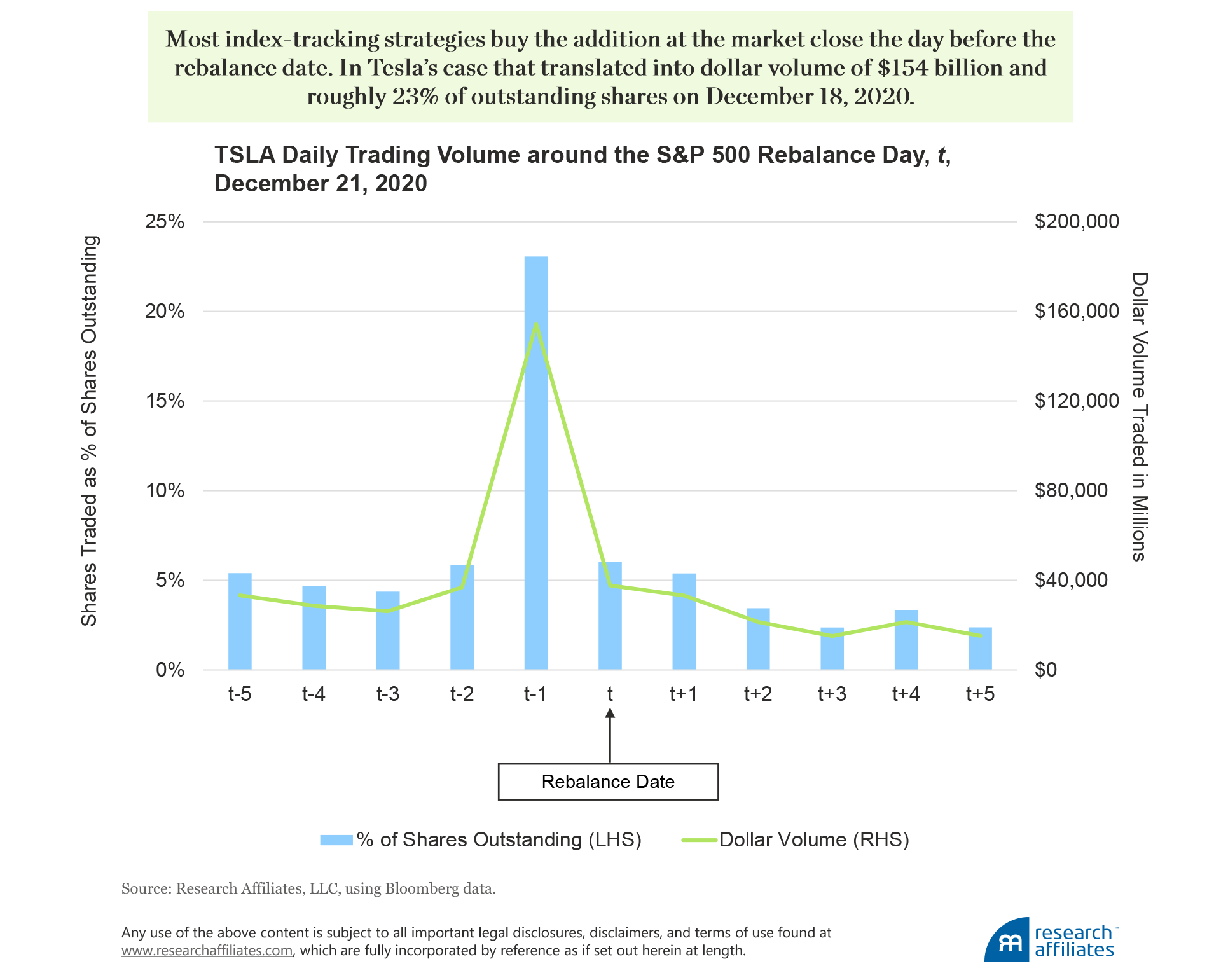 On May 1, 2020, months before Tesla’s addition to the S&P 500, following a 282% year-over-year price appreciation, Elon Musk tweeted “Tesla stock price is too high imo.” Tesla’s market close that day was $140 a share—much lower than its price on entering the index.9 From May 1, 2020, to November 16, 2020, the day before the S&P Index Committee’s announcement that they were adding Tesla to the index, the share price rose another 190% to $408 a share. From November 17 until the market close on December 18, TSLA appreciated another 57%. This massive price appreciation can be partly attributed to the growing importance of the Electric Vehicle (EV) market, the possibility of renewed government subsidies to EV companies, and in recognition that Tesla was profitable for the first time in 2020. We believe the larger contribution to Tesla’s price appreciation, however, is the global EV craze and the price pressure from the long-anticipated S&P 500 rebalance itself.

Six months ago we suggested that investors could benefit by buying long the S&P 500 deletion, AIV, and by selling the addition, TSLA. We based our support for this investment idea on the bubble-level valuations of TSLA, strong price appreciation after the announcement of its inclusion in the S&P 500, and the general pattern we have observed of S&P 500 deletions’ outperforming S&P 500 additions.

“The hidden costs associated with index rebalances could be easily avoided with smarter index design and more-efficient implementation.”

This outcome results from the built-in inefficiencies of an S&P 500 Index rebalance: our research shows that on average in the first six months, discretionary deletions outperformed additions by 14%, and by month 12, the outperformance increased to 20%. When the addition ranks in the top 100 from the date of rebalancing the index, the performance spread is 12% by month 6 and widens to 24% by month 12 (Arnott, Kalesnik, and Wu, 2020). Given the size of its market-cap and the hype around the company, Tesla’s addition to the S&P 500 in December 2020 was the mother of all S&P 500 rebalances. In just the first six months after the rebalance date, an investor who chose to buy AIV and to sell TSLA on December 18 at the market close would today be enjoying a 78.6% relative return advantage—and likely the return advantage does not end here.

Traditional cap-weighted indices routinely buy high and sell low during an index rebalance. Six months after the rebalance into TSLA, we calculate the rebalance cost to S&P 500-tracking investors is 41 bps. Investors, as well as advisors and investment consultants, focus on the expense ratio of funds yet seem to ignore the flaws in the index process that easily cost them 10 times the stated fees. These “hidden” costs could be easily avoided with smarter index design and a more efficient approach to implementation.