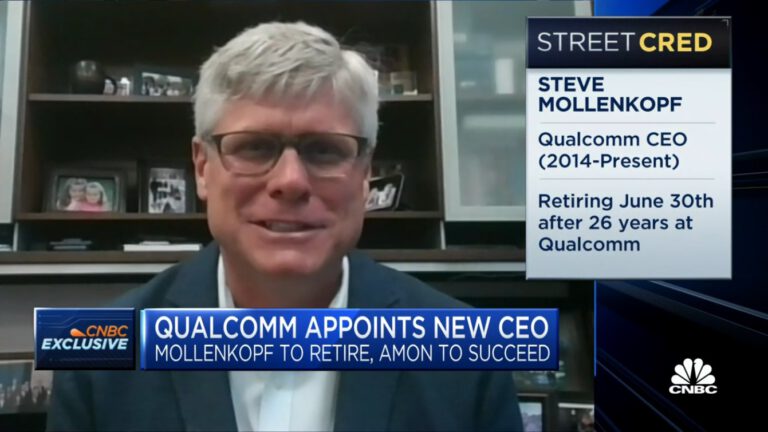 Qualcomm CEO Steve Mollenkopf On His Decision To Retire

ADW Capital had an incredible 2020 with a 119.2% net return for the full year. At a time when most other funds have struggled with relatively low returns, ADW posted double-digit returns in several months of 2020. In December, the fund returned 19.91%, while in November, it posted a return of 39.63%. For the fourth Read More

DAVID FABER: Carl, thank you. Yeah joining us now as we promised is, in a CNBC exclusive, Qualcomm CEO Steve Mollenkopf and the President and CEO-Elect Cristiano Amon. Gentlemen, good to have you both here as we take a look at Qualcomm stock price up 2% so Cristiano, so far so good of course. Steve, you're staying in the job until June and you're smiling which frankly I haven't even seen you smile that much in all the interviews we've done through the years, you already look happier but a lot of people wonder why would a 52 year old CEO after all you've gone through these last seven years, these challenging years and all the different things you've had to deal with, finally sort of things have quieted, why at your age at this point would you want to step down.

STEVE MOLLENKOPF: Well Dave I think, first of all, thank you very much for having us on and I'm really, exciting day for us both I think, you know, for me, I've been thinking about this for some time. The company is in a great position. We've been through a lot but we're also, you know, in a very, very strong position and for, in my mind, that is probably the best time to give it to the next leader. You know and I, and I have just an incredible amount of faith in Cristiano. We've worked together for a long period of time. So, to me, I think the, the, the mistake is to go too long and to make sure that it's in safe and very, very capable hands and I think that's really what you're seeing today.

FABER: But you know Steve I've talked to some people about this. I mean, you remember that scene, I won't go into that but you've gone through so many different things, “Shawshank Redemption” scene where he crawls through the sewer and he gets to the light and he's out there and he's like, finally I've made it, I've escaped. I mean I think of you that way, whether it was the antitrust challenges across the globe, the fight with Apple, avoiding the hostile bid from Broadcom, dealing with the NXP situation and of course, the FTC. And then you get to this clearing, this point where the sun is shining on you and the stock is up 70% last year, whatever the number was or 74% over the last year, I still don't quite get it. What are you going to spend your time doing now? You're certainly not going to be as busy as you were.

MOLLENKOPF: Well I think you know I still have some time left on my shift of course as you know and I'm going to support Cristiano is, however he deems appropriate and I look forward to doing that. But the reality is, you know, there's, we've been through a lot and, and you mentioned a bit of it. But what we, what we didn't do was we didn't lose focus on the roadmap and the great technology that, that really makes the company successful in the future, a lot of that has to do, quite frankly, with the hard work Cristiano did. So, you know, for me it's just a great time to do it, I'm looking for, I'm not going to go and I don't have any plans. I'll probably do a little fishing but most, most importantly, I'm going to sit back and cheer on the, the good people at Qualcomm and watch it be even more successful.

FABER: And so, if another significant CEO job were to open up in the next year or so do you see yourself wanting to potentially be interested in taking it?

MOLLENKOPF: That's not my plan right now. My plan really is to, is to make sure that this succession goes smoothly. I'm going to do a lot of fishing. And I'm going to cheer on Cristiano.

FABER: Alright, we want to see your Instagram account. We're gonna follow that to make sure you're really getting all those fish. Cristiano, you've obviously been running the 5G strategy you've been at the company for 23 years but you're a different person. How is Qualcomm going to change under your leadership and how are you going to be a different leader than Mr. Mollenkopf.

CRISTIANO AMON:  Hi Dave, very happy to be here. Very exciting day for me it's just such an honor and a privilege to be CEO of this incredible company and I really appreciate Steve and his confidence in me. Look, we're super excited about the future of Qualcomm, we probably have one of the single largest opportunities in front of us as 5G becomes essential to the digital economy, it’s going to go into a number of other industries and if you look what we have done at Qualcomm, just the last earnings call, we start talking about the company, not just about the licensing business in the handset business, we talk about now they have a handset business, an automotive business, an internet of things, an internet business RF front-end, I think the company will continue to diversify and really build on this opportunity in front of us as 5G takes the company into a number of different industries.

FABER: And again, how do you see your leadership style being different from Mr. Mollenkopf and/or any changes that may take place at the company once you take the reins later this year.

AMON: Yes, no it’s a, that's a good question. Look, I've been with the company for 23 years so I have a lot of Qualcomm culture in me. And, you know, Steve and I also have been working side by side for 15 years and I don't expect to see change in the strategy, we'll continue to build on the strategy. The way I am, I like many of the other folks in Qualcomm, am passionate about technology, we're going to continue to build on that strategy. But I'll tell you one thing will never change, we'll always strive to be the leader in wireless and really work on technologies that matter.

FABER: Steve, let me come back to you on, on even though the next six months are not unimportant as you sort of transfer, transfer over to Cristiano but give me your sense here, the Biden administration will take office in two weeks. Any real change you see in terms of their approach, whether it be 5G or and/or the national champion that you are certainly viewed as by many now including the outgoing administration to a certain extent or you see things are going to remain more or less as they've been.

MOLLENKOPF: Well I think, I think for a lot of companies I think you probably, you might be more apprehensive but I think for us, we're expecting a lot of stability and that's primarily just due to the type of technologies that we work on I think we're still going to be at the top of the agenda for, for anybody just because of what we work on. And I will tell you I think that the growth of 5G and all the things that Cristiano talked about, I'm guessing that will provide a lot of stability in terms of, in terms of the new administration. I'm looking forward to, to having those conversations but I expect them to go pretty well.

FABER: And you haven't had any as of yet with the incoming administration.

MOLLENKOPF: We've had people reach out and obviously given the position that we play in this very important technology, we do garner some interest, but I expect it to be a pretty smooth transition.

FABER: Cristiano, China remains an important market for the company for any number of reasons and of course that is a relationship that has been fraught to say the least over these last few years. How do you view China right now and of course as you step into this job six months from now, how are you going to deal with sort of the challenges there in terms of our two countries and what are not a lot of areas of agreement.

AMON: You know, we may be in a such a fortunate position, you know, given our technology. Qualcomm is, has had over the years of stabilizing, I think, elements of that relationship. Our technology is important for China, growth ambitions for mobile their own domestic market, it also our licensing business has created a benchmark of respect of intellectual property and we expect that stability to continue. We, we are fortunate that what we do is important for both sides and we expect it to be that way.

FABER: Cristiano, you've overseen to a certain extent the execution of a number of merger and acquisition deals. Is that going to continue to be an important component of the company strategy.

AMON: Yeah, look, it's always has been, you know, I point to, we, we have over the past few years, is building this business on the RF front-end and one important acquisition was necessary to augment our organic growth strategy which was the TDK and I expect Qualcomm to continue to look at M&A as ways to augment, you know, our growth strategy. One thing that is good about our growth strategy is the demand for technology outside mobile phones is already there and we look at abilities, look at companies that can increase our core competencies or get us faster into those markets and we'll continue to look at that.

FABER: Steve, give me a quick take when you back at your career as CEO, what are you most proud of.

MOLLENKOPF: Really that we kept the, the engineering culture and the technology and the roadmap. I mean, I'll probably be remembered as the person that dealt with a lot of, a lot of adversity, but that's really not the part I'm proud of. I'm proud of the fact that we remain strong on the things that matter, which is technology in the face of all that technology, or in the face of all that adversity so that's what I'll remember and it'll be a good memory.

FABER: Yeah, God I didn’t even add to some of the challenges that activist investors as well. So what's the day going to be like for Steve Mollenkopf come let's call it to July of this year.

MOLLENKOPF: Well, I’ll tune in to hear what you guys are saying of course for the beginning of the day but look I'm looking forward to having the ability to unplug and, and as I said cheer on Cristiano so it's gonna, it's gonna be a fun day I think.

FABER: Well, Cristiano, we look forward to talking to you in the future and certainly appreciate both of you joining us this morning. Thank you.

AMON: Oh, thank you very much.