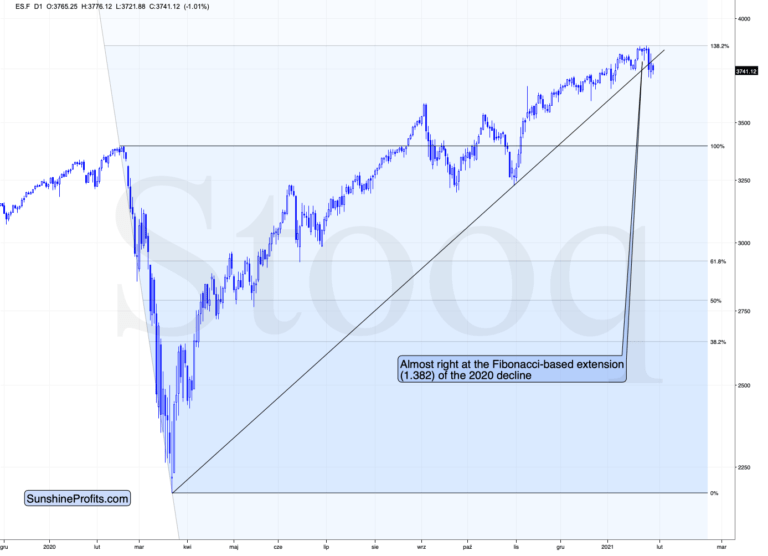 This Is Not The Only Most Interesting Thing

Is the above really the key thing that’s happening in the markets right now? No, it’s only the most interesting thing. I admit, what we’re seeing on the Internet right now is truly absorbing, but one should realize that it’s what used to happen multiple times in history. This time it’s simply more visible as the conversations and associated images are publicly available and widely distributed.

In yesterday’s intraday Alert , I commented on the issue of the likely implications of these cumulative purchases on the precious metals market as a whole and what difference they are likely to make over the course of the following months and weeks – next to none.

Well, there is one effect that I’m expecting to see. It’s the increased volatility during the following price declines – likely proportionate to what was so vigorously bought in the last few days. 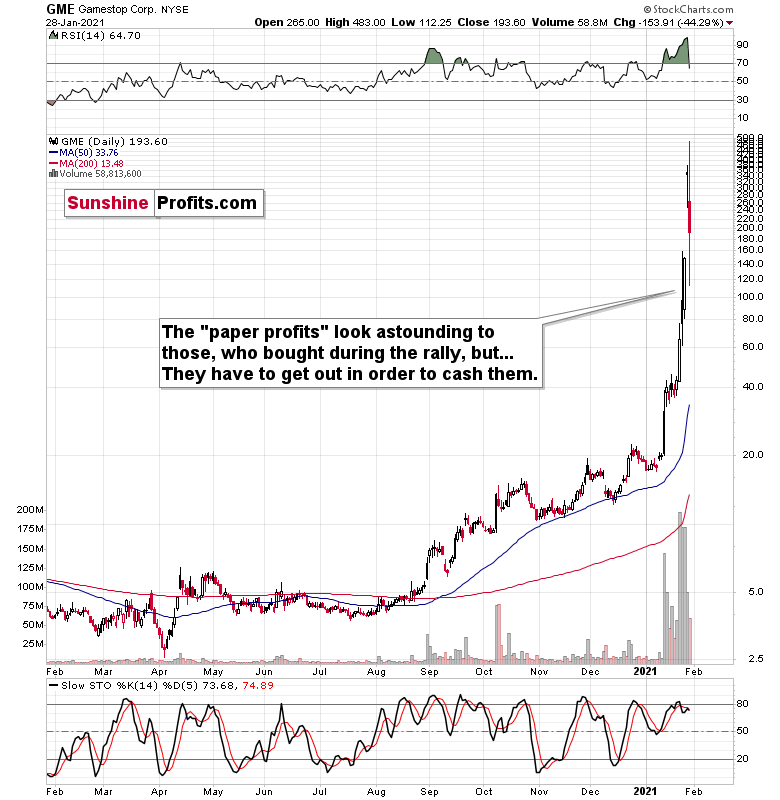 The above GameStop chart shows a near-vertical rally, and it also shows the spike in volume. The purchasing power seems to have dried up and the price – as expected – fell. Those, who bought at $300, were already at a 33% loss as of yesterday’s close.

The various forums (other forums joined in, it’s not just Reddit anymore) are filled with messages and images encouraging to “hold”. But sooner or later people will realize that without fresh buyers the price is going to fall, and one by one, they are likely to panic and sell – especially knowing that they won’t be “punished” by the “forum community” in any way, as it’s not known to the forum participants who is selling and when.

The topic of silver manipulation , paper silver and paper gold really is older than 20 years, and it’s been mostly the same argument over all those years. The price managed to rally from below $5 to about $50 – if there was a massive long-term manipulation, then it wasn’t particularly effective. If it didn’t prevent silver from rallying so far, then why would it prevent silver from rallying from below $20 to $200? Anyway, this topic is too broad to be fully discussed, even in a lengthy Alert – the point that I want to make here is that nothing new happened in the silver market – it just got more spotlight.

A Decline In The Precious Metals

So, what’s more important and timelier than the above topics, even though it doesn’t get as much attention – and can herald a decline in the precious metals? 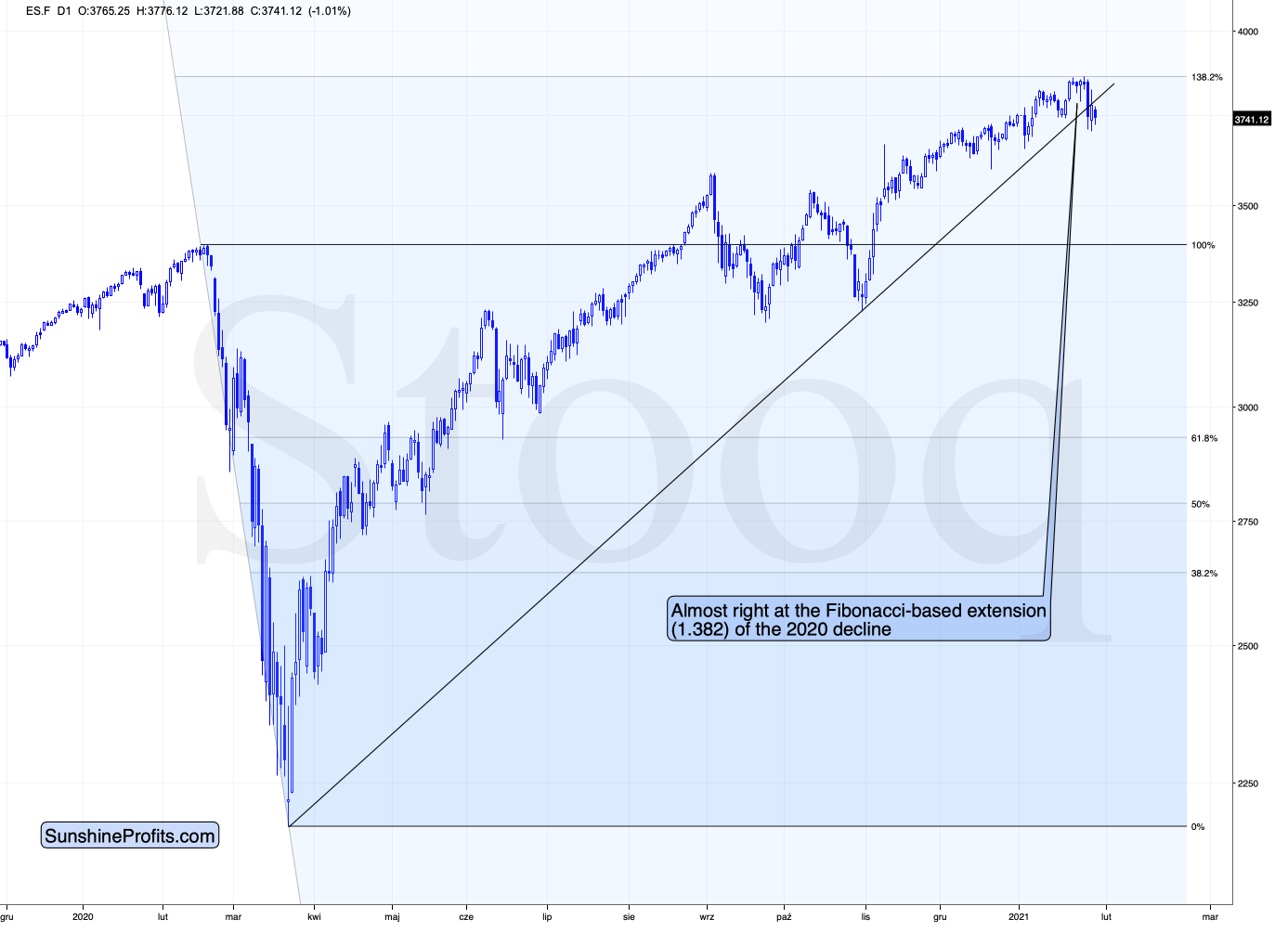 On Wednesday, the S&P 500 futures moved visibly below the rising support line and closed below it for the first time. Despite yesterday’s strength, stocks were unable to rally back above it and so far, today, stocks are moving lower. If the S&P 500 futures close today below this line, the breakdown will be confirmed by both: three consecutive daily closes and a weekly close. This will be a bearish sign for the short term.

If stocks slide further shortly, it will be particularly bearish for silver and mining stocks, which means that those who bought yesterday based on forum messages etc. would be likely to find themselves at a loss relatively soon. This, in turn, means that the decline could be quite volatile.

Second, there is also another market that could ignite the powerful decline in the PMs and miners – the rallying USD Index. 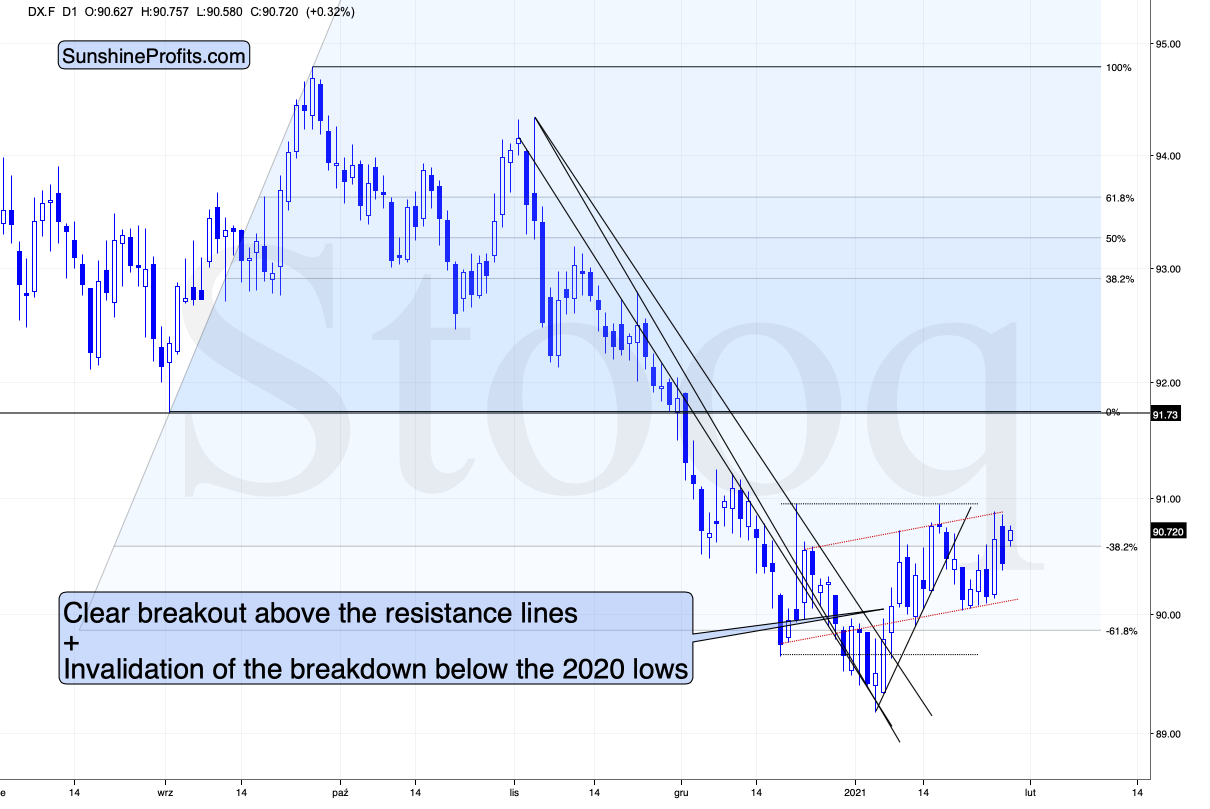 Despite the intraday decline, the USDX is once again close to its 2021 highs.

The USD Index is testing its previous 2020 highs, and it might (!) be forming the right shoulder of a short-term head-and-shoulders pattern. The key word here is “might”. If the USDX rallies above its previous highs (about ~91), this pattern will be invalidated and the short-term outlook for the USDX will be clearly bullish. This would also serve as a breakout above the inverse head-and-shoulders pattern (mid-Dec. low being the left shoulder, the early 2021 low being the head, and the recent low being the right shoulder), which would have even more bullish implications (with the price target above 92).

Would this be enough for gold to decline to $1,700? It might not be enough, but it might be enough for the miners to move to my above-mentioned initial downside targets ($31 and $42.5 for GDX and GDXJ, respectively).

So, the bearish storm seems to be brewing. How are the precious metals responding? Let’s take a look at gold. 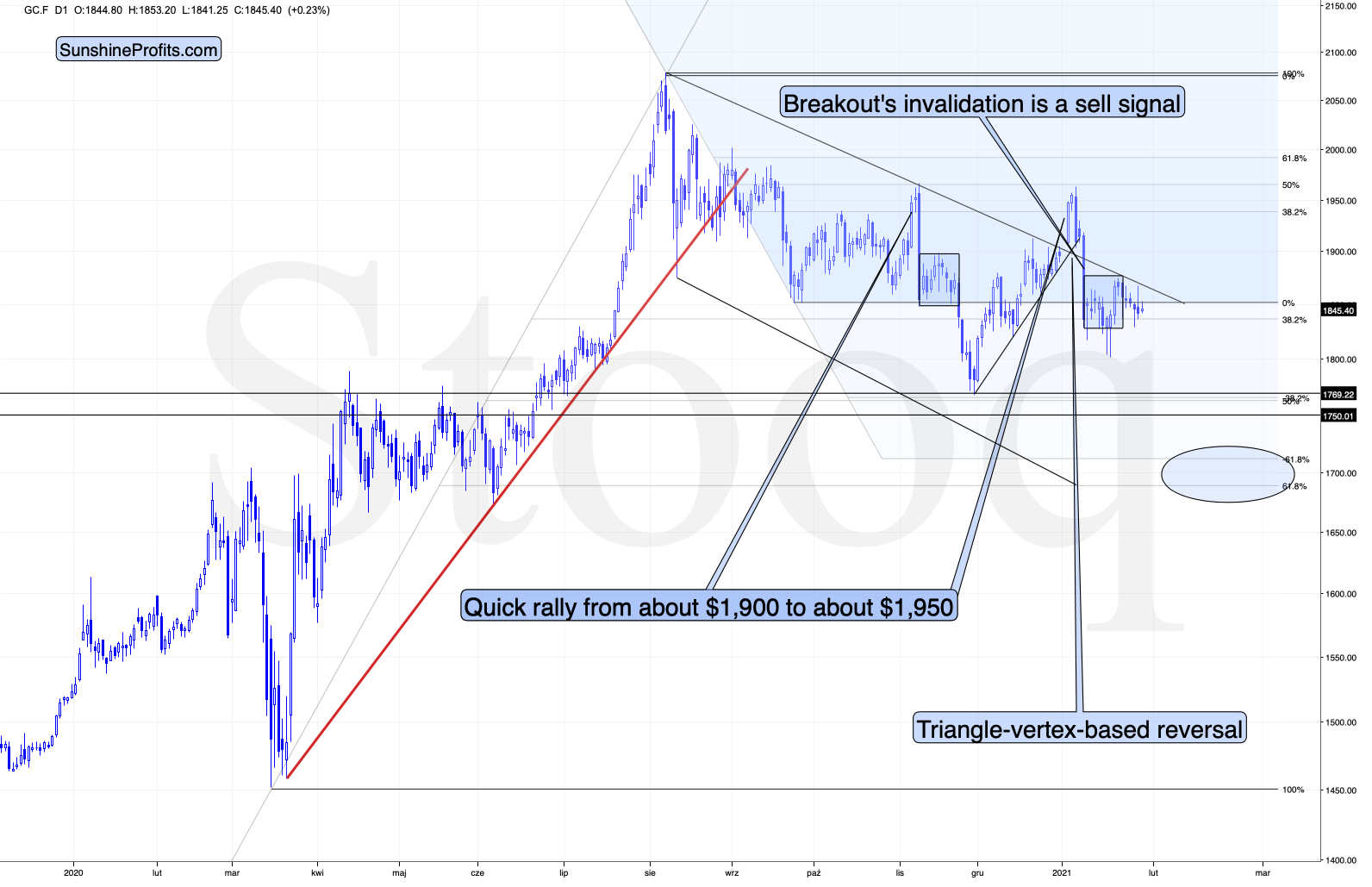 A Reversal In Gold

Gold shrugged off yesterday’s “exciting news” coming from the internet’s forums. It rallied initially, almost touched its declining resistance line, and then reversed, thus erasing the previous gains. It’s now trading pretty much at the same levels where it was trading two days ago. The outlook remains bearish and yesterday’s reversal actually makes it even stronger. 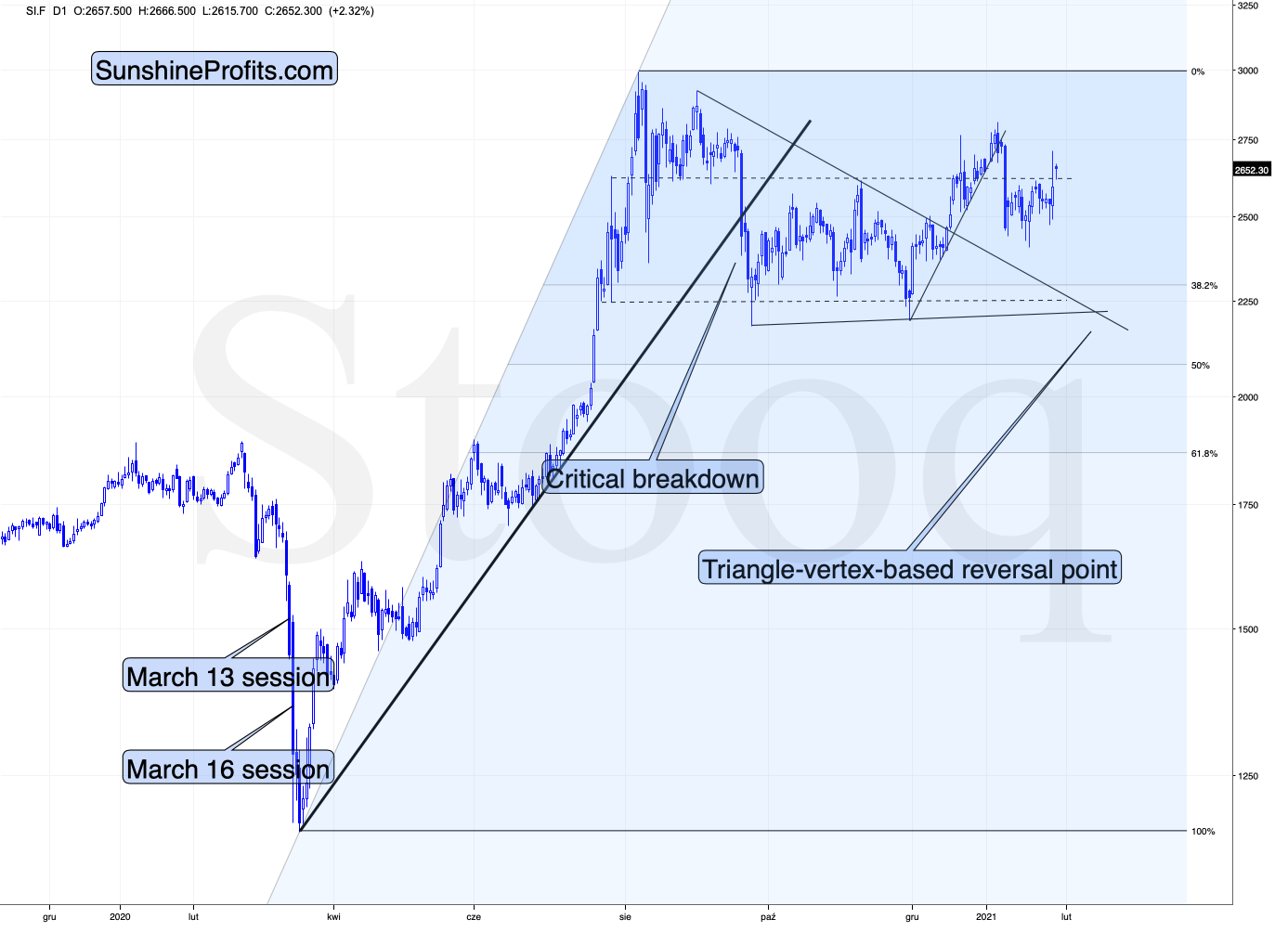 Silver is visibly stronger than it was a few days ago, but if the precious metals sector is about to head lower (especially given the breakdown in stocks) this would be normal even without the entire “let’s buy silver” forum theme. 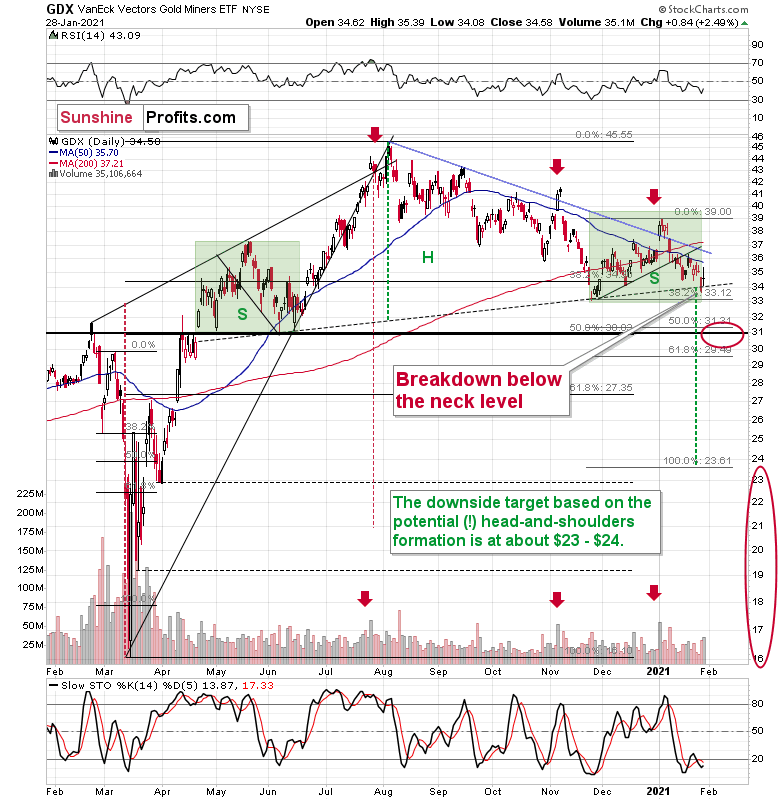 Miners invalidated the breakdown below the neck level of the head and shoulders pattern. Invalidations of these breakouts tend to be “buy” signals. BUT yesterday’s session has “ this time really was different” written all over it.

Part of the purchase encouragements on forums were for mining stocks. While silver has indeed rallied yesterday (and so did AG, which was particularly promoted), the GDX ETF moved higher only somewhat. It still closed more or less at its mid-January low and it didn’t manage to erase Tuesday’s decline.

Overall, I think that the proper context is the relative weakness of miners and not the direct implications of the technical invalidation.

Moreover, please note that if the symmetry in terms of shape between both green boxes on the above chart is to be upheld, then it shouldn’t be surprising to see a quick volatile upswing that’s very short. In fact, since the volatility now is smaller than it was in late April 2020, what we saw yesterday might have already been the analogy to what had happened back then.

All in all, the outlook for the precious metals market remains bearish for the following weeks, regardless of what the next few days will bring.

Also… Do you remember about bitcoin? Some time ago, I wrote that the bitcoin situation made the overall situation in currencies similar to late 2017 / early 2018. 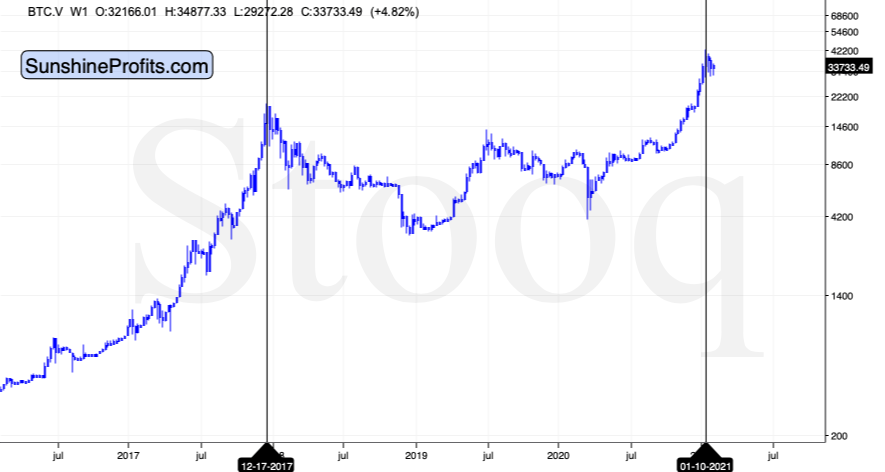 Just as we saw back then, bitcoin soared while the USD Index plunged. Then both markets reversed . 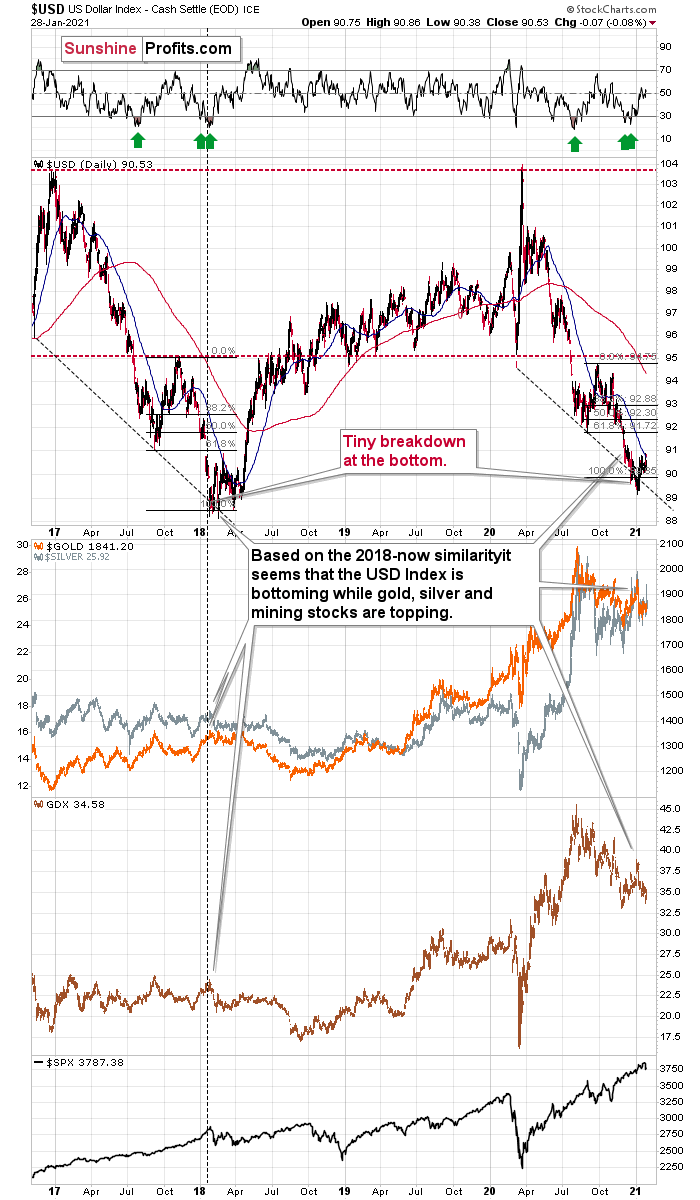 That was also the time when precious metals and miners (and stocks) topped.

The Final Part Of A Bull Market

We just saw another clear confirmation that this is the very final inning of the rally. You probably heard that in the final part of a bull market, everything that’s in it soars. If it’s a gold bull market, then even stocks that have “gold” in their name will likely rally even though they might have nothing to do with the precious metals market. People don’t care to check, and emotions are too high to bother checking what they are actually buying.

Well, there’s a cryptocurrency that started as a joke, but then became a relatively big market. 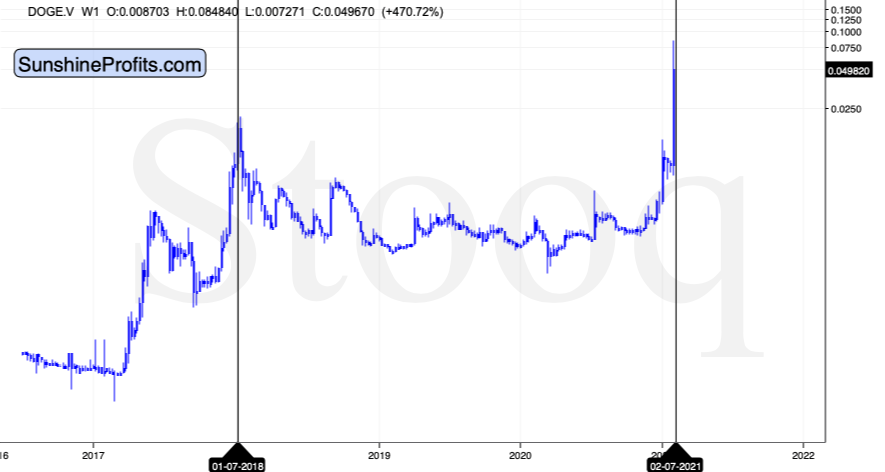 And it had previously soared in this way in early 2018, a few weeks after bitcoin topped.

This is exactly what one would expect to see at a market top, based on common sense (analogy to buying just about anything close to the top), but the fact that we already saw pretty much the same thing in bitcoin, dogecoin, and the USD Index at the top 3 years ago should be flashing a big red light even for the most bearish of USD bears and most bullish crypto bulls.

Remember, early 2018 was also the moment when the stock market and PMs topped.

The above indications are on top of myriads of other factors pointing to lower precious metals and mining stock prices – this is all much more important than forum posts – even very convincing ones.

Please note that today’s volatility is somewhat expected – it’s Friday (options expire) and it’s also the final session of the month. Quite many people and entities might want to push prices and indices in their favor, so that options expire on their preferred side of their options’ strike prices. So, whatever happens today might easily be erased in early February.

All essays, research and information found above represent analyses and opinions of Przemyslaw Radomski, CFA and Sunshine Profits’ associates only. As such, it may prove wrong and be subject to change without notice. Opinions and analyses are based on data available to authors of respective essays at the time of writing. Although the information provided above is based on careful research and sources that are deemed to be accurate, Przemyslaw Radomski, CFA and his associates do not guarantee the accuracy or thoroughness of the data or information reported. The opinions published above are neither an offer nor a recommendation to purchase or sell any securities. Mr. Radomski is not a Registered Securities Advisor. By reading Przemyslaw Radomski’s, CFA reports you fully agree that he will not be held responsible or liable for any decisions you make regarding any information provided in these reports. Investing, trading and speculation in any financial markets may involve high risk of loss. Przemyslaw Radomski, CFA, Sunshine Profits’ employees and affiliates as well as members of their families may have a short or long position in any securities, including those mentioned in any of the reports or essays, and may make additional purchases and/or sales of those securities without notice.