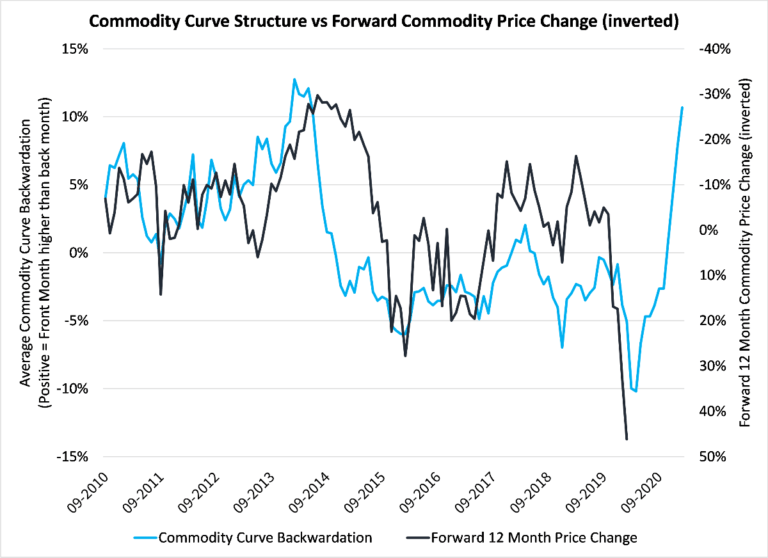 Summary: February again saw a large intra-month reversal with the S&P rising 5.9% by mid-month and then declining through the end of the month to end +2.6%.  The relatively placid surface concealed significant rotation with momentum strategies initially rising 8.7% followed by a swift but dramatic decline to close the month with losses.  Logica’s portfolio of momentum-biased calls outperformed broader momentum but were not enough to offset broader loss in the factor, alongside negative contribution from other pieces of the portfolio, including each component of our macro overlay, leaving us down 1.71% for the month. 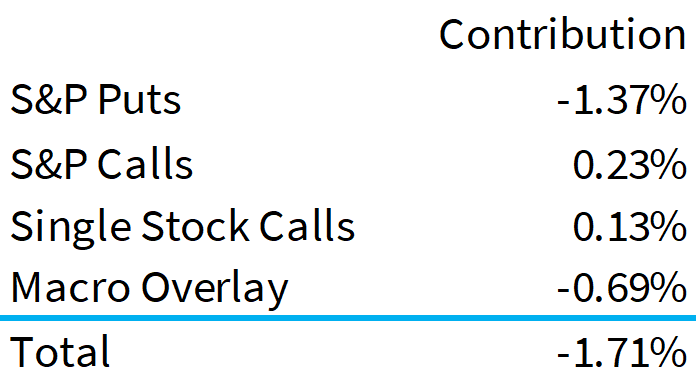 “Now she's waitin' for him to apologize She just wants to cut him down to size” - Golden Earring, 1980

Logica’s factor diversification module, “Logica Focus Diversifier” (LFD) in our single stock or sector calls, was again a positive contributor offsetting poor performance for momentum strategies.  LFD contributed positive 38bps vs -26bps from LFT (our momentum module).  But this was not enough to offset the heavy burden from our full put load on the S&P500 and a structural headwind from declines in each component of our macro overlay – where gold, dollars and bonds all declined as a confusing reflation and “white-hot growth leading the Fed to lose control” narrative have taken hold to explain stock price behavior. 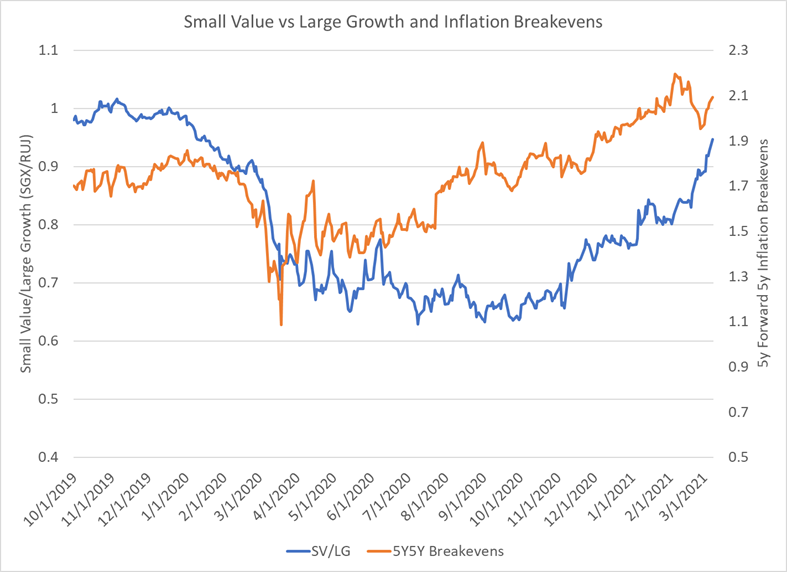 One of the charts making the rounds purports to explain the reversal in Large Cap Growth vs Small Cap Value as a function of inflation breakevens – rising inflation breakevens must be good for Small Cap Value.  Over a reasonably short period, this appears true.  Admittedly, there was a notable lag between the rising of inflation breakevens from the March lows (orange line above) and the beginning of the recovery in Small Value (blue line in late September 2020), but this appears good enough for government work… Unfortunately, this relationship is totally unstable over time and any correlation appears spurious.  Likewise, other measures of inflation appear to have little impact on the relative performance.  If only it were so easy. 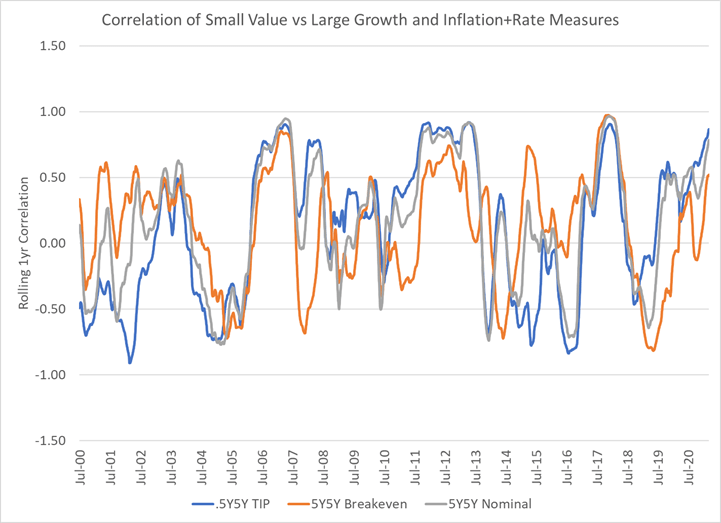 What continues to offer extraordinary explanatory power is the Size effect, which many had dismissed for good in 2020.  Almost perfectly on cue, Size has become the dominant explanatory factor since April 2020: 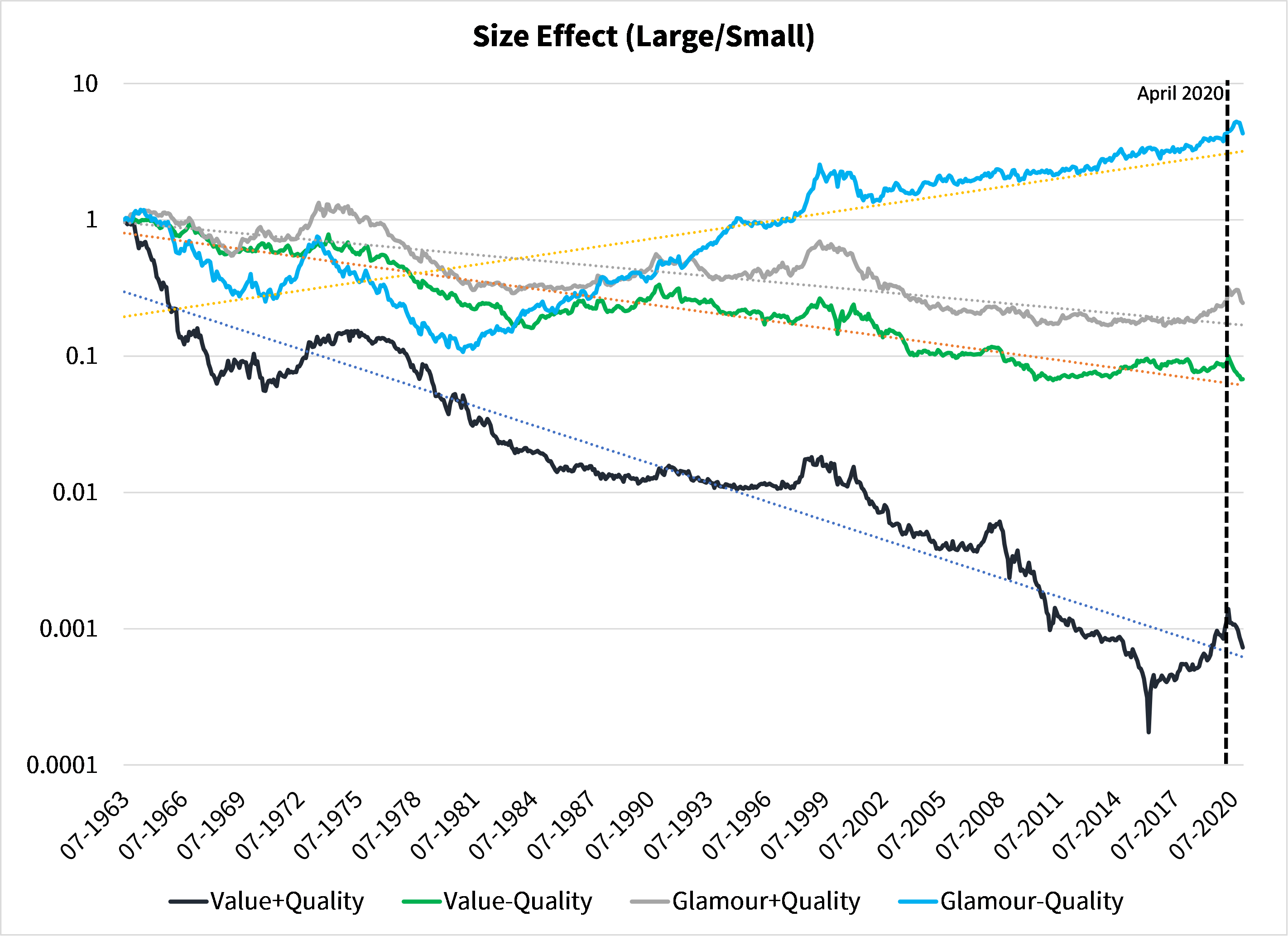 This is in keeping with the paper highlighted in our January letter from Ho Jiang et al at Michigan State:

“We show theoretically and empirically that flows into index funds raise the prices of large stocks in the index disproportionately more than the prices of small stocks. Conversely, flows predict a high future return of the small-minus-large index portfolio. This finding runs counter to the CAPM, and arises when noise traders distort prices, biasing index weights.” - Jiang et al 2020

As we’ve discussed repeatedly, we saw March 2020 as an active manager driven event.  Faced with the prospects of a sharply deteriorating economy, active managers sold into the CoV-19 lockdowns creating distressed pricing for assets that active managers favor – small value stocks.  As the markets stabilized and began to recover, the rush to reinvest, first in “work from home” winners and then into “economically sensitive” recovery stocks, drove relative performance to greater extremes while the continued flows into passive vehicles drove prices for all assets higher.  As we have seen time and again over the past several years, the challenge in momentum assets (like the challenges for value stocks before them) has not been the longs, but rather the shorts.  And again, within the large cap universe this has been much less true than overall.  In short, size has mattered. 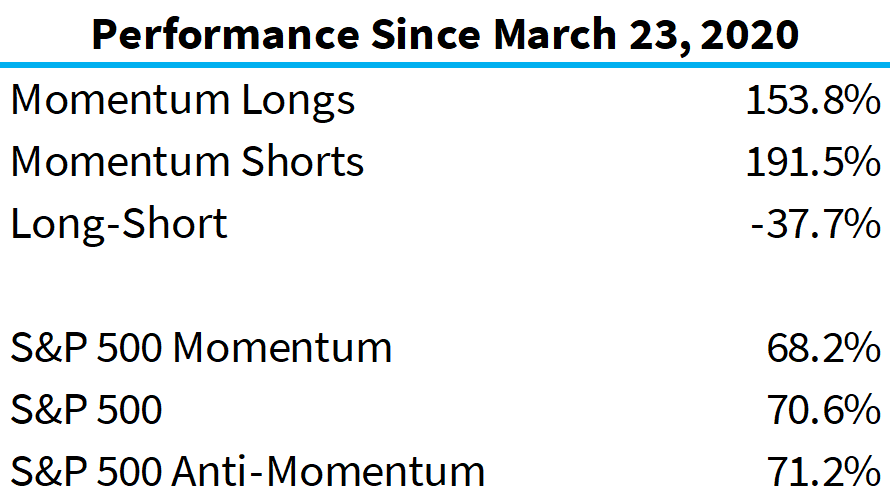 “This is why we can't have nice things, darling because you break them, I had to take them away” - Taylor Swift, 2017

The parallels to 2000 continue to mount.  Last month we highlighted the extraordinary growth of ARK Investment.  Through the middle of February, this pace accelerated with ARK ETFs taking in a staggering $10B from January 29th to February 19th and dethroning the long-time champ, Vanguard Total Market ETF (VTI).  A firm that started 2020 with less than $4B in total AUM saw inflows of 2.5x that amount in sixteen days.   What impact did this have?  The underlying assets of ARK ETFs rose by only $14.5B, suggesting the rest of the world was quite eager to supply Cathie Wood with shares she wished to buy.  In the past few weeks, flows have turned negative and performance has followed suit.  As of early March, roughly 30% of ARK investors are now facing losses in the flagship fund, ARKK. 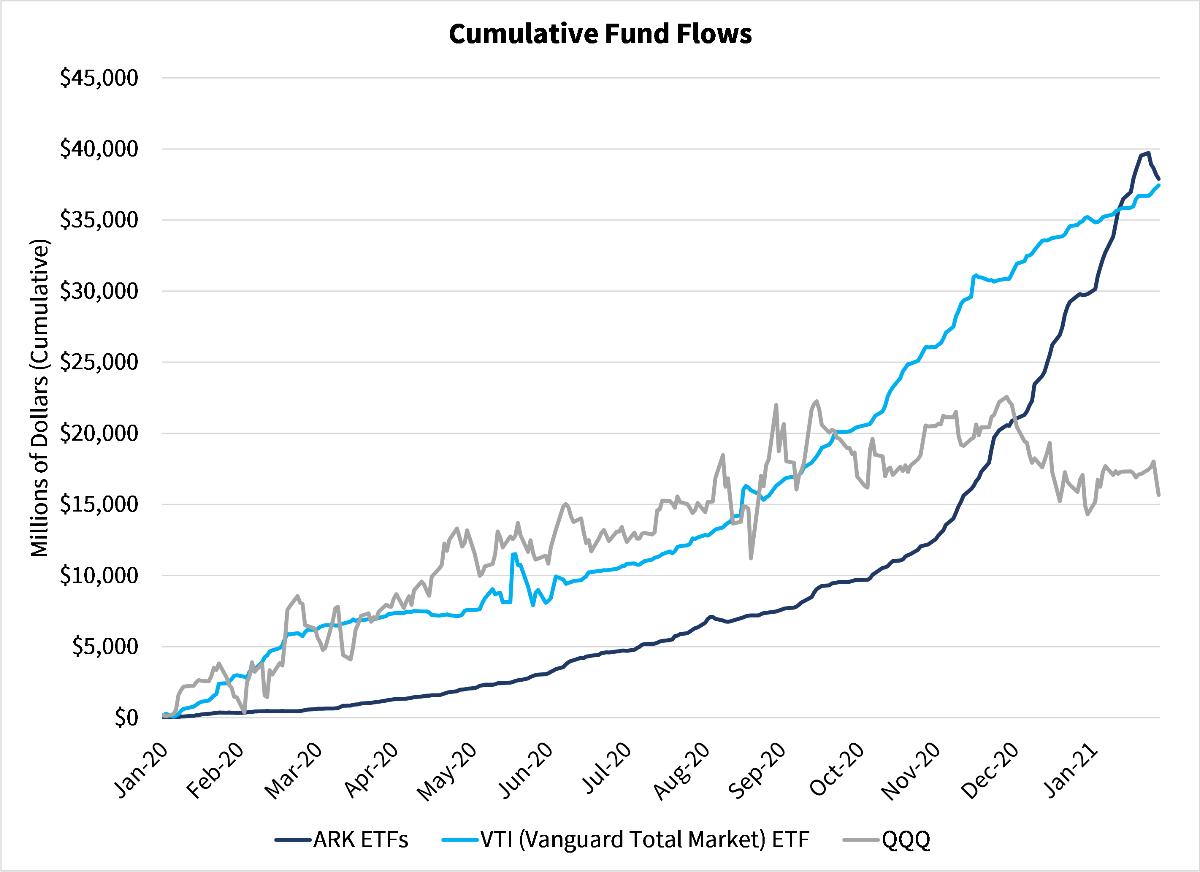 There is a silver lining in this story.  As with all equity portfolios, as losses mount, the potential size of the problem shrinks.  At the current price of $120 for ARKK, we are fairly close to the maximum AUM that might be released if those who lost money turned and ran.  Of course, the process of selling would drive prices lower, but the risks become more manageable the more prices fall. 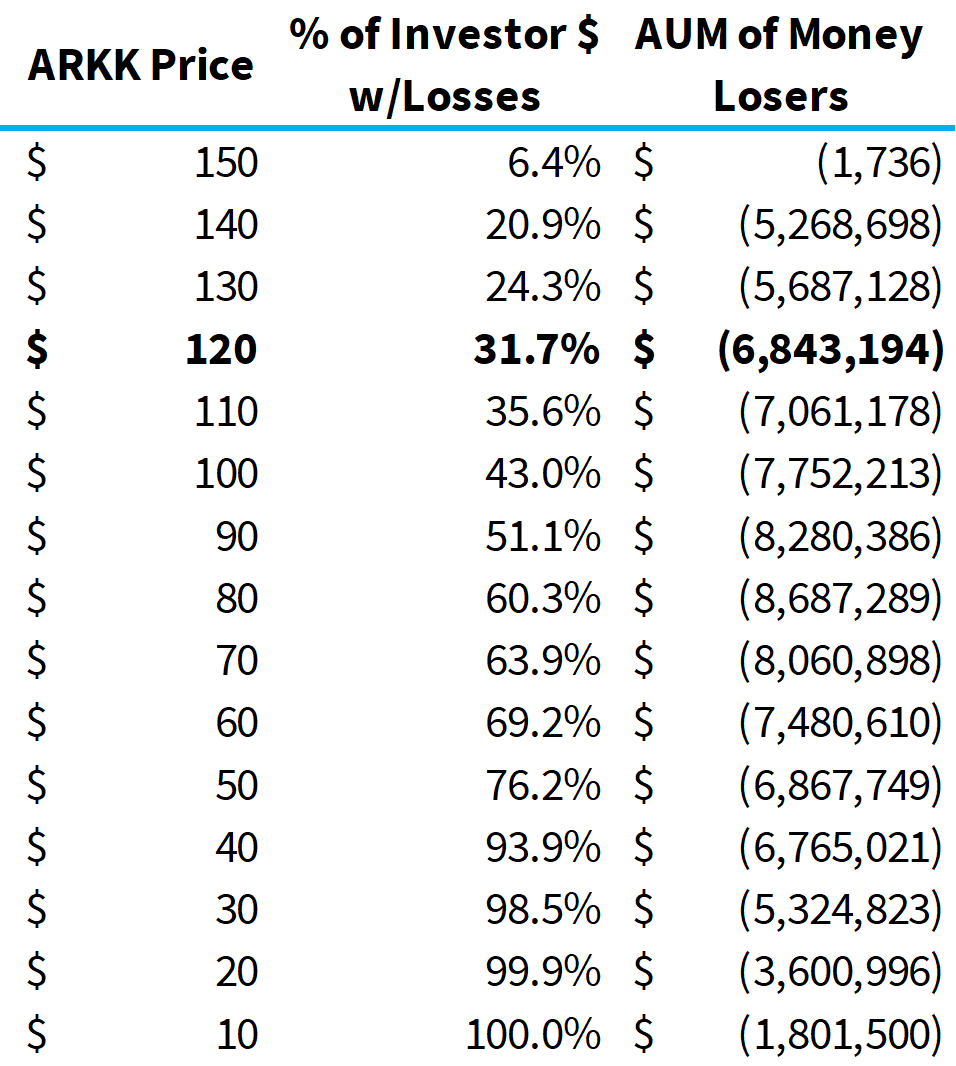 Credit markets behave very differently as falling prices exacerbate collateral shortfalls and necessitate increased hedging activities.  This is one of many reasons to be relatively sanguine about the ARK travails relative to credit fund systemic events.

“I've tried to make a dollar

I can't even save a cent

It takes all of my money

Just to eat and pay my rentI've got those inflation blues

Blue as I can be”

While the world remains focused on the “re-opening narrative” driving inflation higher amid concerns of excess money printing, the evidence is fairly clear that, unlike prior periods, the challenge is not higher aggregate demand, but rather supply chain bottlenecks as retooling occurs.  The closest parallel, the late 1940s, experienced a rise in consumer inflation as soldiers returning from WWII, flush with cash and the GI Bill, re-entered a society where productive capacity had been focused on wartime production.  To put this in perspective, the United States auto industry built only 610 automobiles in 1944.  By 1946, production had jumped to 2.5MM and new all-time highs were in place by 1948. 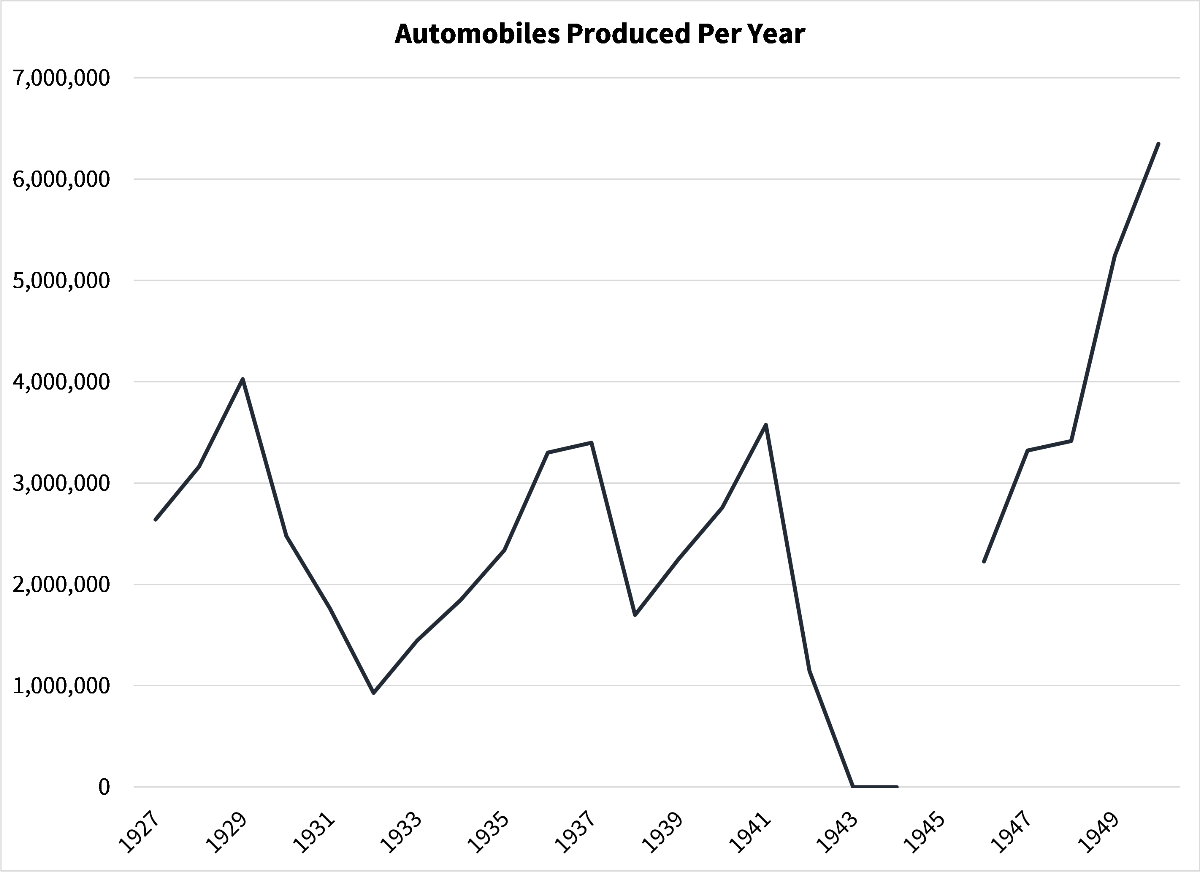 In contrast, the production of automobiles was only modestly interrupted in 2020 with a very brief decline to 1,700 units in April 2020.  By July 2020, production had recovered to 2019 levels.

As of January 2021, semiconductor supply chain disruptions had resulted in chip shortages that restricted supply, but concurrently, new car prices rose a modest 5.5% YoY, suggesting limited pricing power for producers despite supply shortages.  The CPI for new cars rose to a record in December 2020, but is roughly unchanged over the past 8 years.  Over the past 21 years, new car prices have risen a total of 6%. 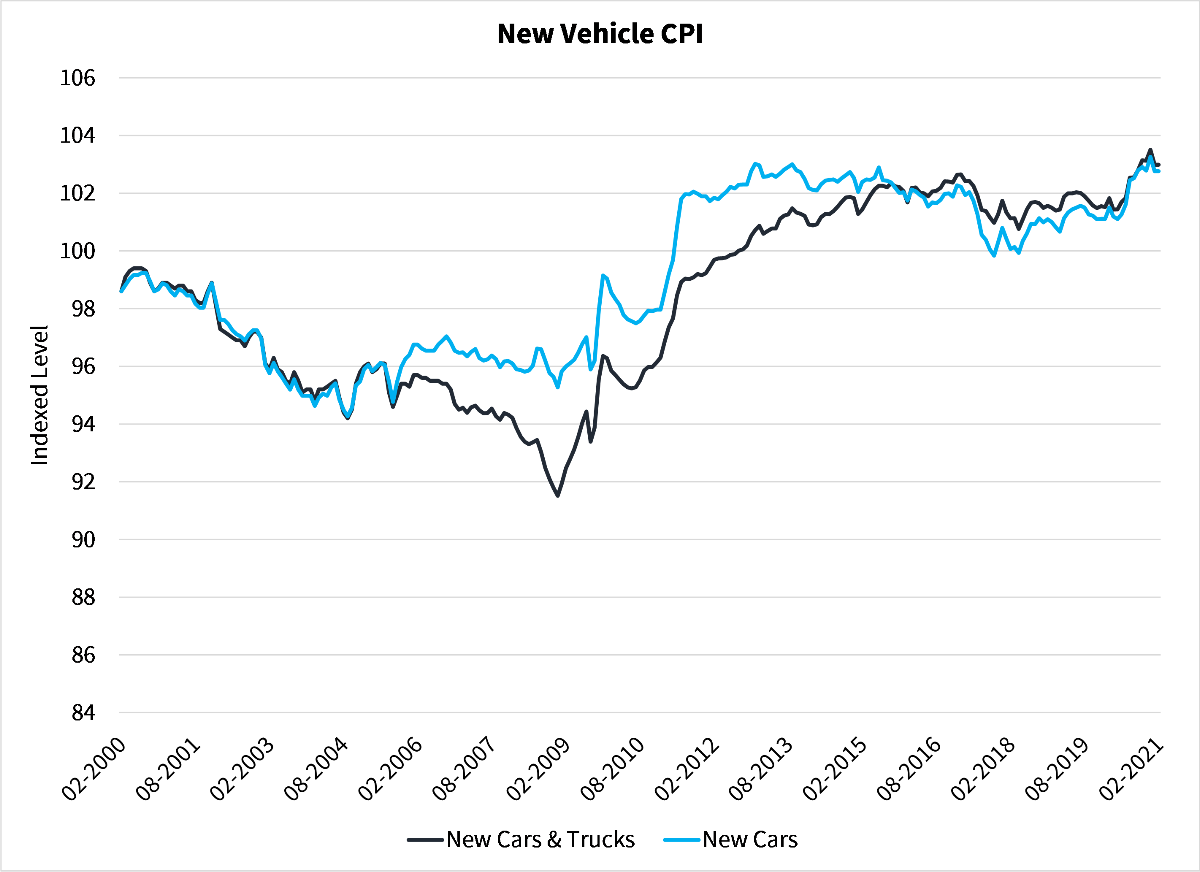 Is there anything at this time that might result in the type of breakout household demand we experienced in the 1940s?  Despite record stimulus, it seems unlikely.  Over the period of private sector shutdown from Dec 1941 to Dec 1946, the US non-agricultural labor force grew from 46.7MM to ~51.5M.  By 1950, the non-agricultural labor force had risen to 57.6MM, 23% growth over a decade and unemployment reached its all-time low in 1952.  Over that time period, the United States retooled to meet global production needs and explosive consumer demand.  Inflation averaged 5.5%.

If we look at the United States today, labor force has been stagnant, rising only 5% over the past decade.  Looking forward, growth is a little better with low rates of entrepreneurship and geographic mobility constraining the need to create jobs.  The consumption of durable goods, like autos, is largely a function of labor force growth; over the past 40 years, the US has steadily “de-materialized” as marginal demand increasingly shifted to services (education, healthcare, etc) while the need for physical goods have declined.  Improving quality in many durable goods (cars last much longer today) and decreasing geographic mobility result in much lower demand impulses and increased price elasticity.  Supply chain disruptions will be resolved (exciting to see the first cans of Caffeine Free Diet Coke return to the shelves of the local grocery this month https://www.foodandwine.com/news/caffeine-free-coke-pepsi-soda-shortage), but there is little evidence of the sustained outward shift in aggregate demand necessary to create inflation rather than a substitution effect.  As a result, like the narrative that the world would end in March 2020, the “reflation” narrative appears to be an attempt to explain rising equity prices through fundamentals rather than market structure. 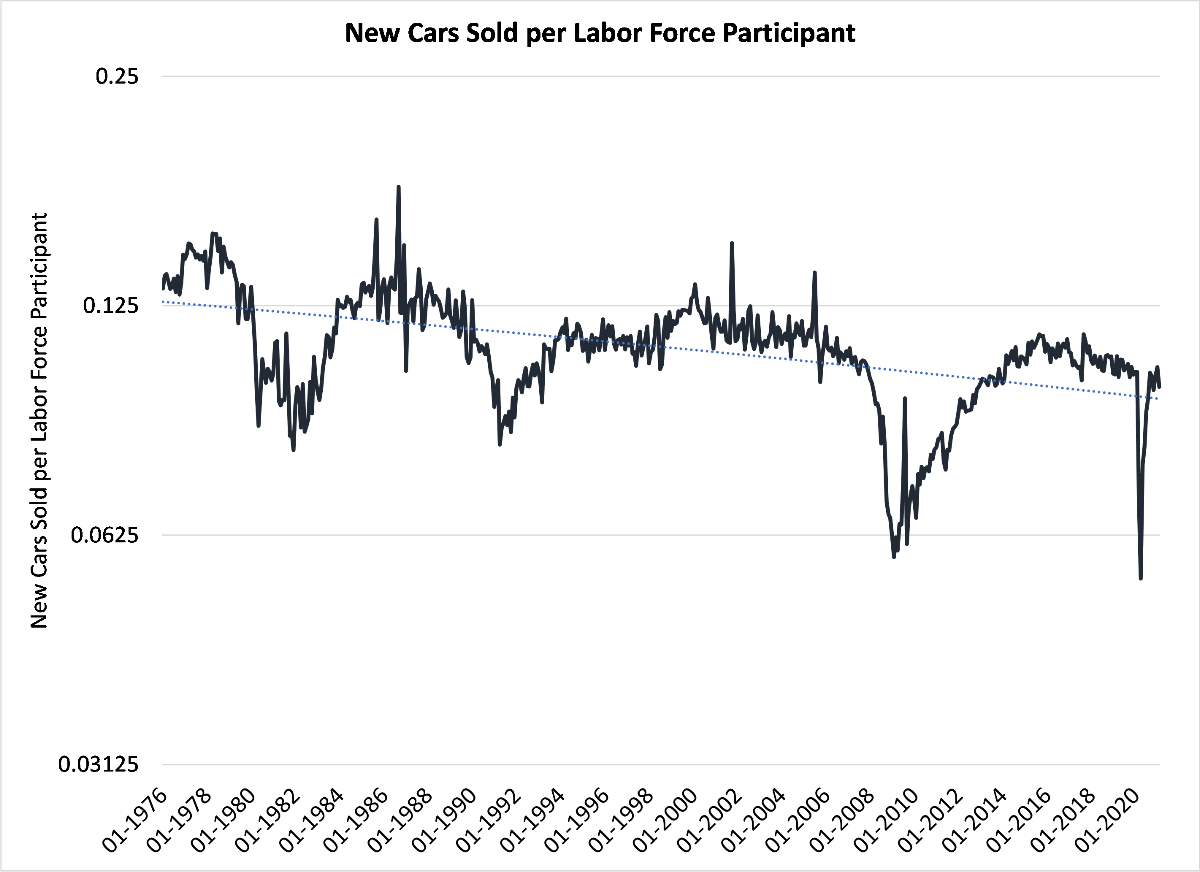 For those that remain unconvinced, it is worth highlighting the relationship between commodity curve backwardation (front month at premium vs back month) and subsequent commodity price changes.  With backwardation measures hitting record levels, it seems unlikely that the commodity cycle will continue to power meaningfully higher from these levels.  Perhaps we should be cognizant that narratives emerge to explain historical performance rather than forward looking phenomenon. 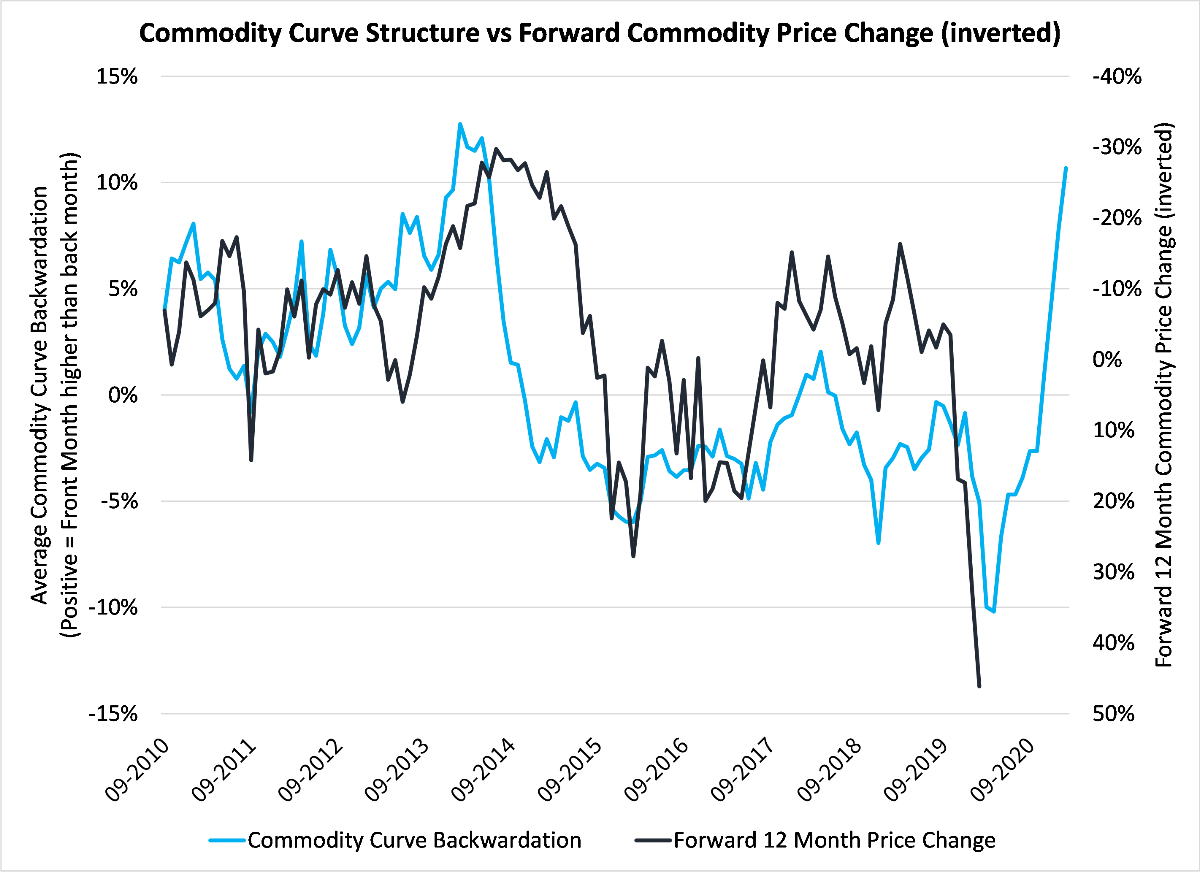 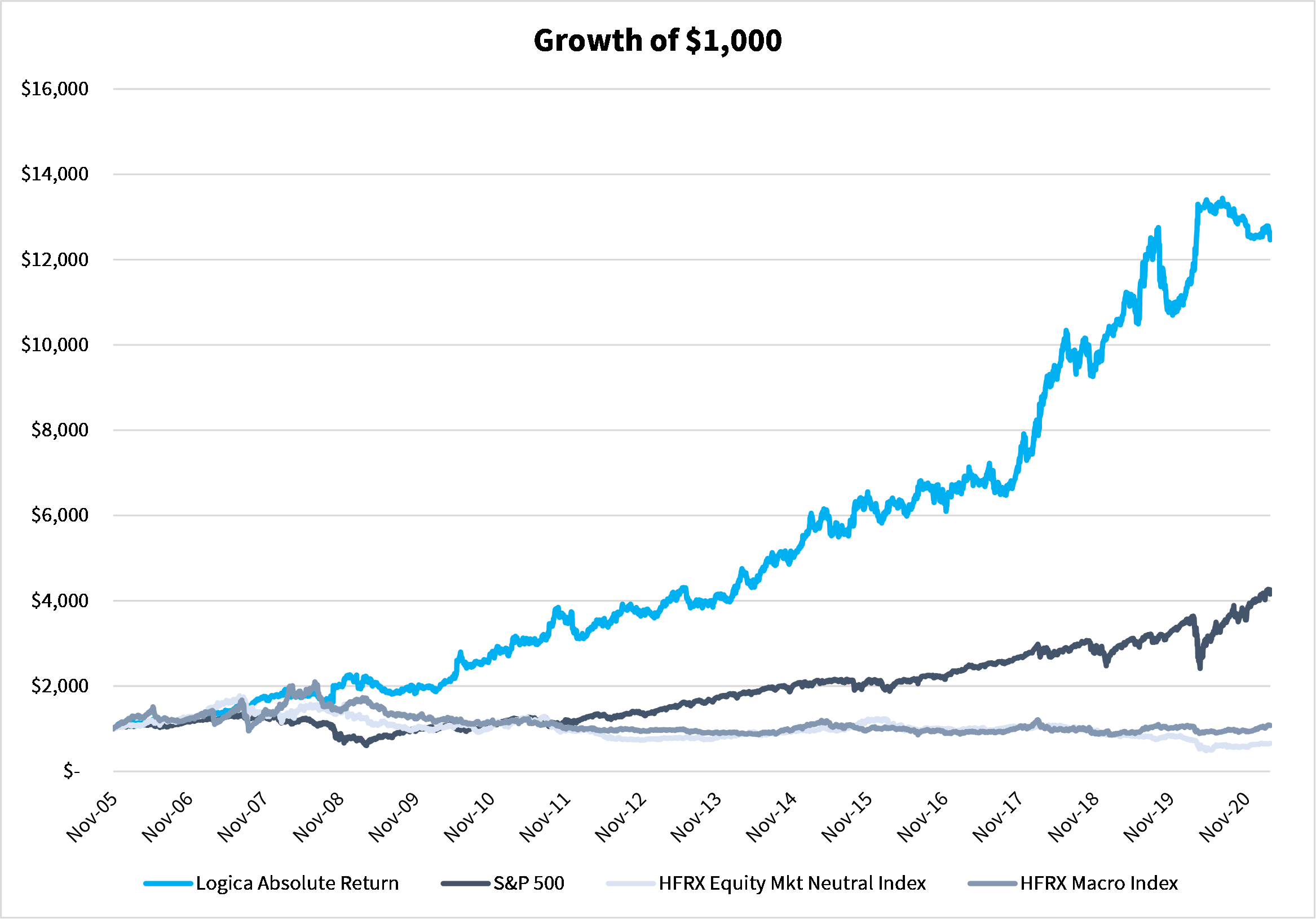 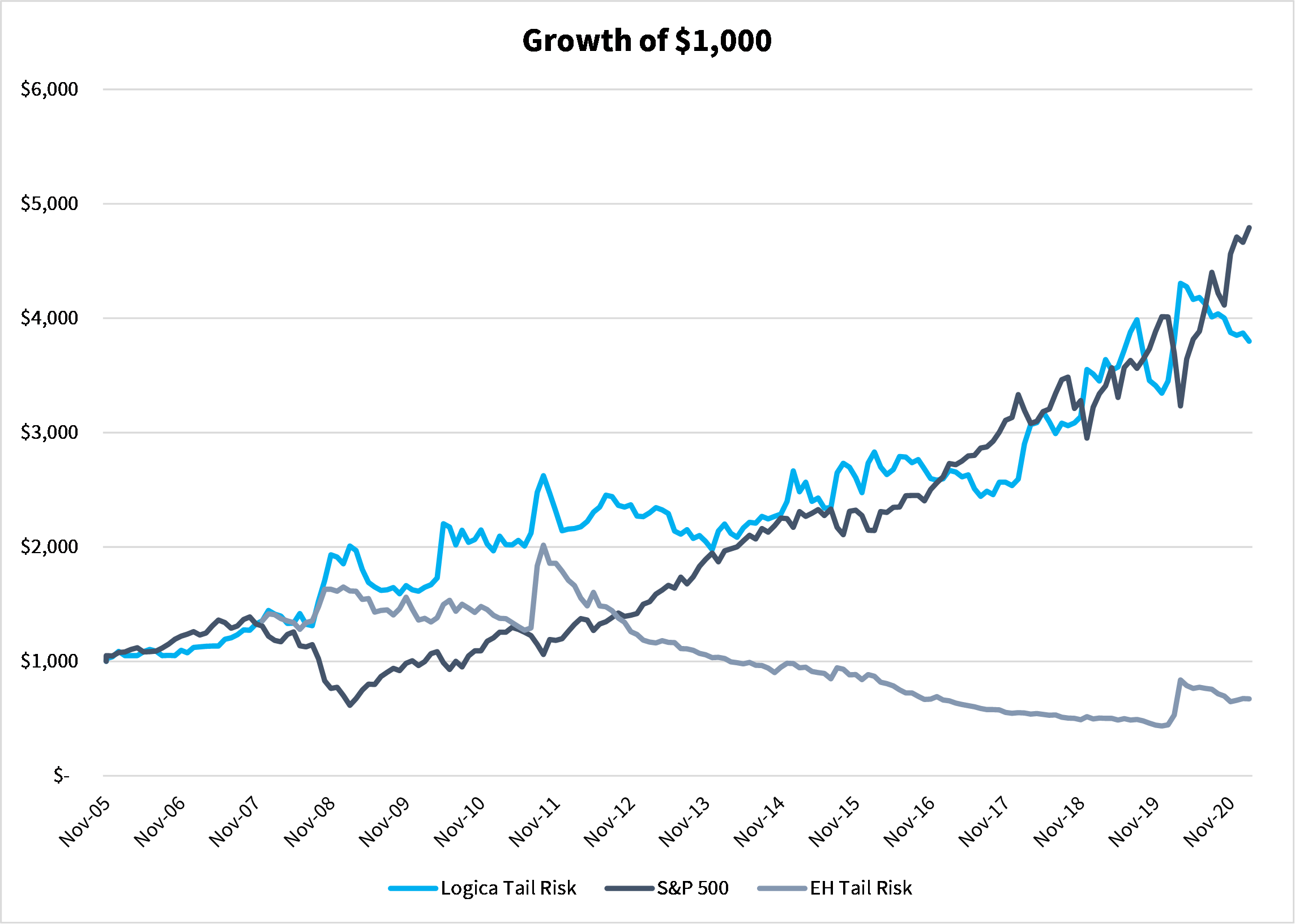