Why Now Is the Best Time Ever to Buy Cannabis Stocks

1) A final reminder about the webinar taking place tonight at 8 p.m. Eastern time, which I'll be hosting with my friend Tom Carroll, who writes the Cannabis Capitalist newsletter for our sister company Stansberry Research.

Tom will build on what he's written in Empire Financial Daily over the past three days about Why Now Is the Best Time Ever to Buy Cannabis Stocks.

And just for tuning in, he'll even share the name of one of his top stock picks.

The event is free to attend, but you must reserve your spot in advance. You can register here... See you tonight!

2) In Monday's e-mail, I discussed Berkshire Hathaway's (BRK-B) rapidly growing share repurchases. On Tuesday, I shared highlights from CEO Warren Buffett's annual letter. Yesterday, I shared my analysis of the company's performance in 2020. Finally, today, I'd like to update my estimate of Berkshire's intrinsic value.

I use the methodology that Warren Buffett himself has outlined many times over the years. It isn't rocket science – in fact, it's how you'd value almost any mature business: Apply a reasonable multiple to normalized earnings and then adjust for any excess assets or liabilities such as cash, bonds, equity holdings, and debt. In Berkshire's case, the latter – what Buffett calls "investments per share" – is a substantial portion of the total value.

I put together a table that shows the past five years of the numbers I used to estimate Berkshire's intrinsic value (all dollar figures are millions except per share ones). The top section shows the six line items from Berkshire's balance sheet that I added together to arrive at investments per share, which totaled $286,724 per A-share as of the end of last year.

To this, we must add the value of Berkshire's wholly-owned businesses – nearly 100 companies, like BNSF Railway, various utilities, manufacturers, insurers, and so forth. In the bottom section, you can see the numbers over the past five years: 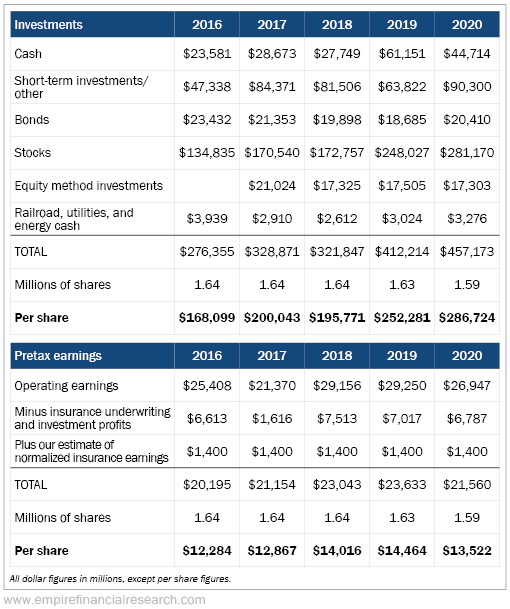 As the breakdown shows, Berkshire's operating businesses generated $26.9 billion in pre-tax earnings last year, down 7.9% due to the pandemic.

From this, I subtract all insurance and investment income ($6.8 billion last year), but then add back $1.4 billion for normalized insurance earnings, to arrive at estimated pre-tax earnings of $21.6 billion or $13,522 per A-share.

This chart captures the data from the two tables above and extends it back to 2002. As you can see, both drivers of Berkshire's value have risen strongly and steadily over time: 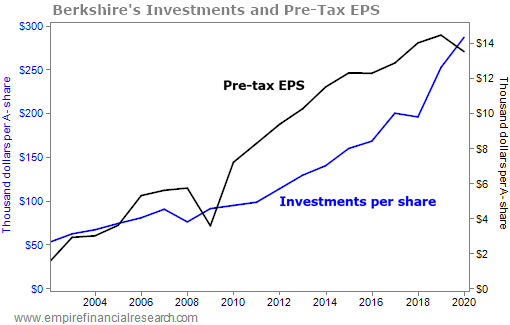 While earnings fell during the economic downturns in 2009 and 2020, they quickly recovered after the global financial crisis... and I expect them to do so again this year (Berkshire's operating income jumped 13.6% year over year in the fourth quarter, which bodes well for the future).

To value Berkshire, the last piece of the puzzle is determining what multiple to apply to the earnings stream (keeping in mind that the numbers in the table are pre-tax). Reasonable people might disagree on this, but I use a multiple of 11 times, which is likely conservative in light of the quality and growth profiles of Berkshire's businesses and the high multiples awarded to blue-chip companies in today's market.

This table shows the same calculation for every year back to 2002 (using earnings multiples ranging from 8 times to 12 times, depending on market conditions): 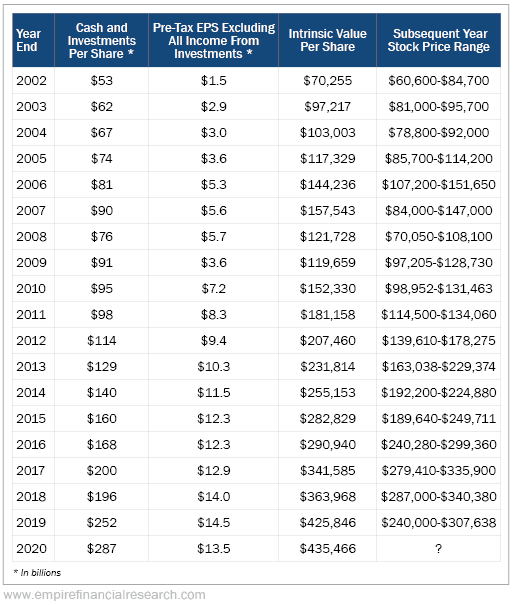 That's not crazy cheap, but Berkshire is incredibly safe and has solid growth prospects. And now Buffett is buying back his stock in size. So, overall, this is still a good time for conservative, long-term-oriented investors to initiate a starter position.

3) Last week, my colleague Berna Barshay and my friend Doug Kass warned about the dangers of the uber-popular exchange-traded fund ("ETF"), the ARK Innovation Fund (ARKK). See: Will Cathie Wood Need Her Ark? and What Will Be the Fate of the Reigning Queen of the Markets?

We love a wall of worry. We saw it on social media, lot of chatter, some of it just waiting for our fund in particular to take a tumble, maybe to buy and some happy to sell and short and all that.

ARK's flagship Innovation ETF is now down 20% from its highs and is beginning to face outflows. The illiquidity risks are serious and worsening.

What makes ARK's situation potentially worse is the heavy retail participation in many of its names. Retail investors may be fickler and have price-drive sentiment. As a result, any declines in ARK's illiquid names may drive copycat selling by retail traders playing with momentum.

In addition, Bloomberg recently reported that Nikko Asset Management, a Japanese firm, copies many of ARKs strategies for Japanese investors. This makes ARK's illiquidity even bigger than it seems. For example, when accounting for the shares owned by Nikko, ARK and Nikko own "at least 25% of three firms" according to Bloomberg...

Short-sellers appear to smell trouble brewing. According to one trader, the borrow rate on ARK's Innovation ETF (ARKK) reached 19% yesterday.

Reddit traders are raising alarms too. One post titled, "Investors beware: $ARKK is a liquidity disaster waiting to happen" was upvoted over three thousand times.

My take: It's by no means certain that ARKK will blow up... but the risk is rising, so why take the chance? Just get out and invest in something sensible – like Berkshire!

4) My colleague Enrique Abeyta and his analyst Gabe Marshank continue to educate, entertain, and enrich with their new Hard Money's Million Dollar Podcast. Here are the past three episodes: