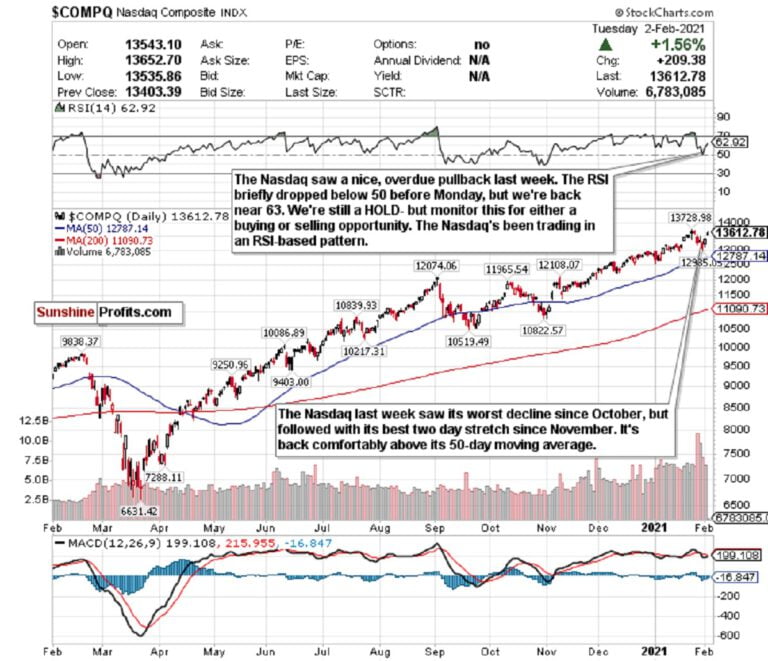 So how about GameStop (GME) and AMC (AMC)? That Silver short-squeeze? Fighting the man? That was fun while it lasted.

I don't want to lecture anyone or say that I told you so. During one of my newsletters last week, I even said that I tip my hat to anyone who profited from this—all the respect in the world.

Me personally, though, I would never trade like this. Monday (Feb. 1) and Tuesday's market (Feb. 2) was nothing more than a reality check. GameStop's stock has lost nearly half of its value, and other Reddit darlings like AMC, Blackberry (BB), Koss (KOSS), and Silver (SLV) tanked.

Who knows, maybe the party's not over. But I think the plummet in the Reddit stocks was bound to happen. Bubbles always eventually pop.

The market seems happy that the earth is back on its axis in stockland. The indices have recovered nearly all of last week's losses already.

I didn't call the GameStop short-squeeze, but I had called last week's downturn for a while. The recovery so far this week wasn't entirely surprising either.

Be that as it may, I remain concerned about complacency in the markets and overstretched valuations, plus the potential return of inflation. But the breather last week was needed and brought the indices to less overbought levels.

Generally, investors and analysts are bullish these days. According to a recent Bank of America survey of 194 money managers, bullishness on stocks is at a three-year high, and the average share of cash in portfolios, which is usually a sign of protection from market turmoil, is at the lowest level since May 2013.

We have still not declined 10% from the record highs- the minimum needed for a correction. Although the market needed last week's downturn, we're once again mostly right where we were several days ago.

I know what you’re thinking. Amazon (AMZN) and Alphabet (GOOGL) are the latest companies to crush their earnings estimates, how could we possibly have a correction?

For one, there are still things to be concerned about from a public health and economic perspective.

Long Overdue For A Market Correction

We are also long overdue for one. We haven't seen one since last March. Corrections are healthy for markets and more common than most realize. Only twice in the last 38 years have we had years WITHOUT a correction (1995 and 2017).

We're no longer as close to those same BUY levels as we were after market close on Friday. But we're not quite at SELL again, and I still think we're a few pullbacks away from making more BUY calls with conviction. In other words, welcome to no man's land.

In my last newsletter, I cautioned against making manic moves and trading with emotions. We saw our worst week since October last week and declined in two of the previous three. Much of that was due to the GameStops and AMCs freaking out Wall Streeters. But I reminded you then, and I'll remind you again. Shares of Eastman Kodak surged by 1,481% in three days last July, and the broader market seems to have done just fine since then.

Do not let the noise deter you from your goals. My goal for these updates is to educate you, give you ideas, and help you manage money like I did when I was pressing the buy and sell buttons for $600+ million in assets. I left that career to pursue one where I could help people who needed help, instead of the ultra-high net worth.

We're all in this together!

Is It Safe to Buy Tech Again? 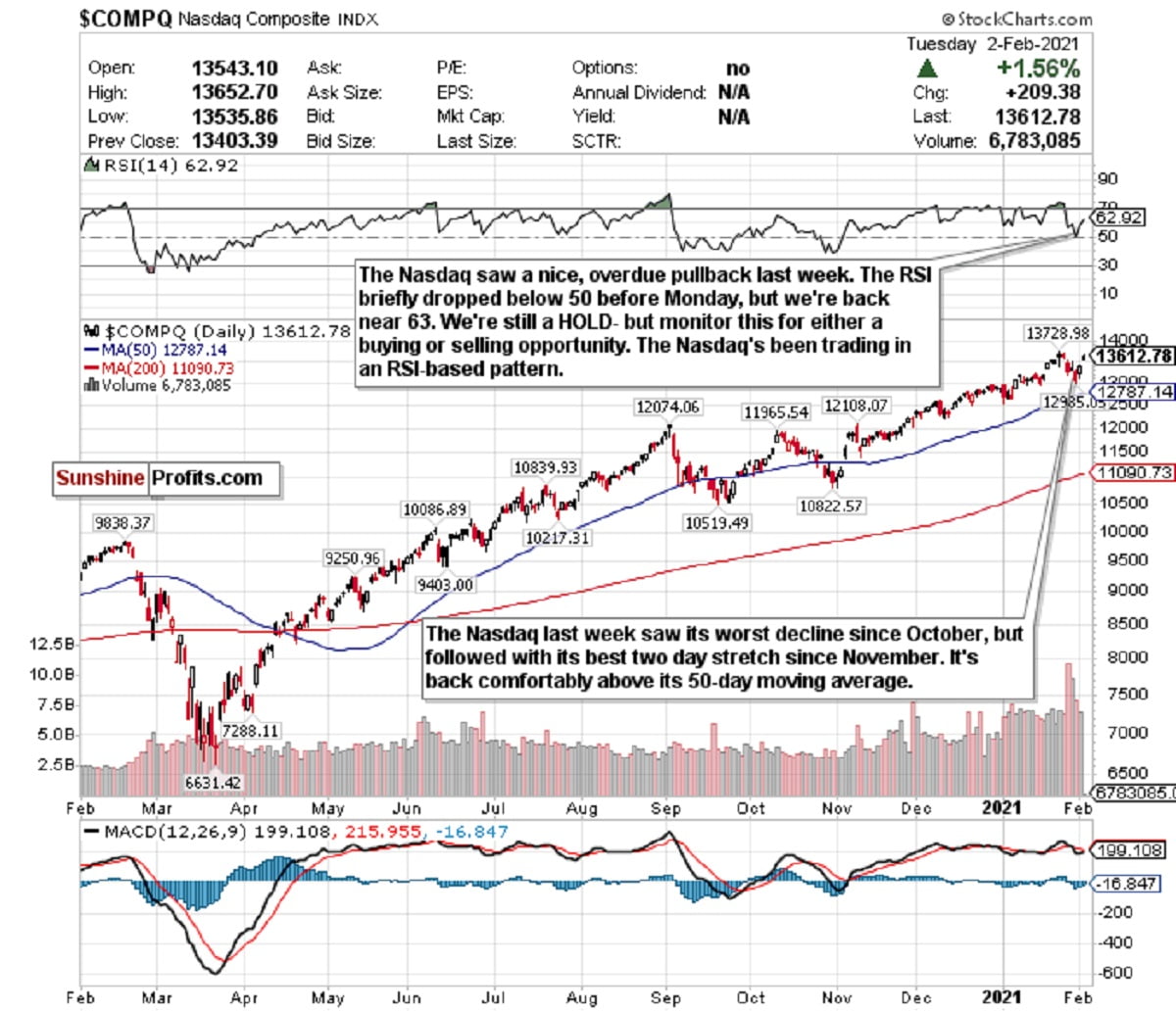 Earnings season for tech stocks hit record numbers last week, and is set to continue this week with Amazon and Alphabet clobbering estimates. Usually, when investors get what they expect, it’s more of a reason to sell rather than buy.

But the Nasdaq so far this week has already recovered almost all of last week’s losses, and then some.

I’m not ready to call this a BUY though, or recommend buying into momentum. There are still concerns. Tech valuations, especially the tech IPO market, terrify me. SPACs don’t help either. The Nasdaq last week declined to a more "normal" level, and in the span of two days, hit an RSI approaching 63 again.

Last week's decline was needed, but there are still echoes of the dot-com bubble 20-years ago. I remain bullish on earnings and tech sectors such as cloud computing, e-commerce, and fintech for 2021, but please monitor the RSI.

The RSI is how I have called the Nasdaq since December. While an overbought or oversold RSI does not automatically mean a trend reversal, it has with the Nasdaq.

The Nasdaq pulled back on December 9 after exceeding an RSI of 70 and briefly pulled back again after passing 70 again around Christmas time. We also exceeded a 70 RSI just before the new year, and what happened on the first trading day of 2021? A decline of 1.47%.

When I changed my Nasdaq call from a HOLD to a SELL on January 11 after the RSI exceeded 70, the Nasdaq declined again by 1.45%.

Before the Nasdaq exceeded an RSI over 73 prior to January 25th, I switched my call back to SELL, and the QQQ promptly declined 4.13% for the week.

The Nasdaq is trading in a precise pattern.

I still like tech and am bullish for 2021. But for now, I'm going to stay conservative and say HOLD.