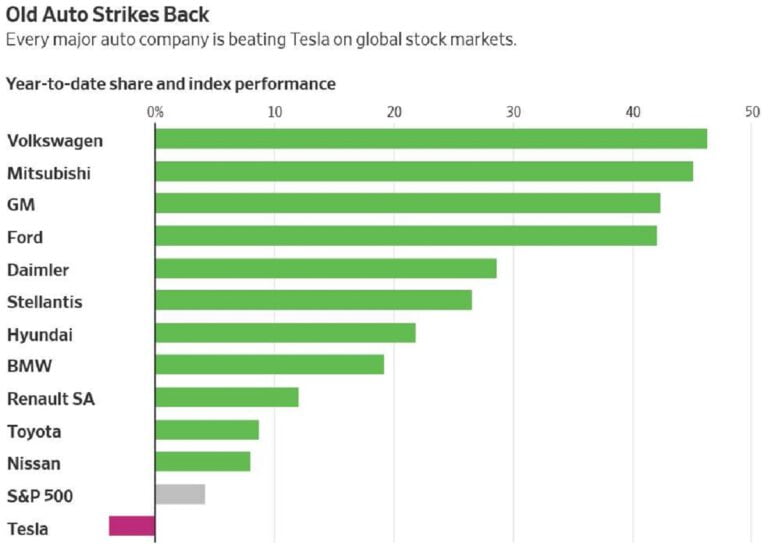 1) We recommended Volkswagen (VOW3.DE) in our Empire Stock Investor newsletter two weeks ago, and it’s already up 18% as investors are starting to wake up to the absurd valuation disparity between Tesla (TSLA) and the other automakers (you can subscribe to ESI here – it’s only $49 for the first year): Ford, GM and Volkswagen Shares Are Hot. Thank Electric-Vehicle Mania. Excerpt:

Investors are piling into a long-neglected sector: old-school car makers that are reinventing themselves as electric-vehicle producers.

After years lamenting that their shares were undervalued, Ford Motor (F), General Motors (GM), Volkswagen and other blue-chip car manufacturers are experiencing sharp share-price gains this year as they embrace the new technology.

Ford is up 42% so far this year, while GM’s shares have also surged 42%. VW’s stock is up 46% and even briefly rose 29% in intraday trading one day this week when the company held a “Power Day” event, saying it would build six EV battery factories in Europe alone over the next 10 years. VW has this week also pushed ahead of SAP to become the most valuable stock on the German DAX index. 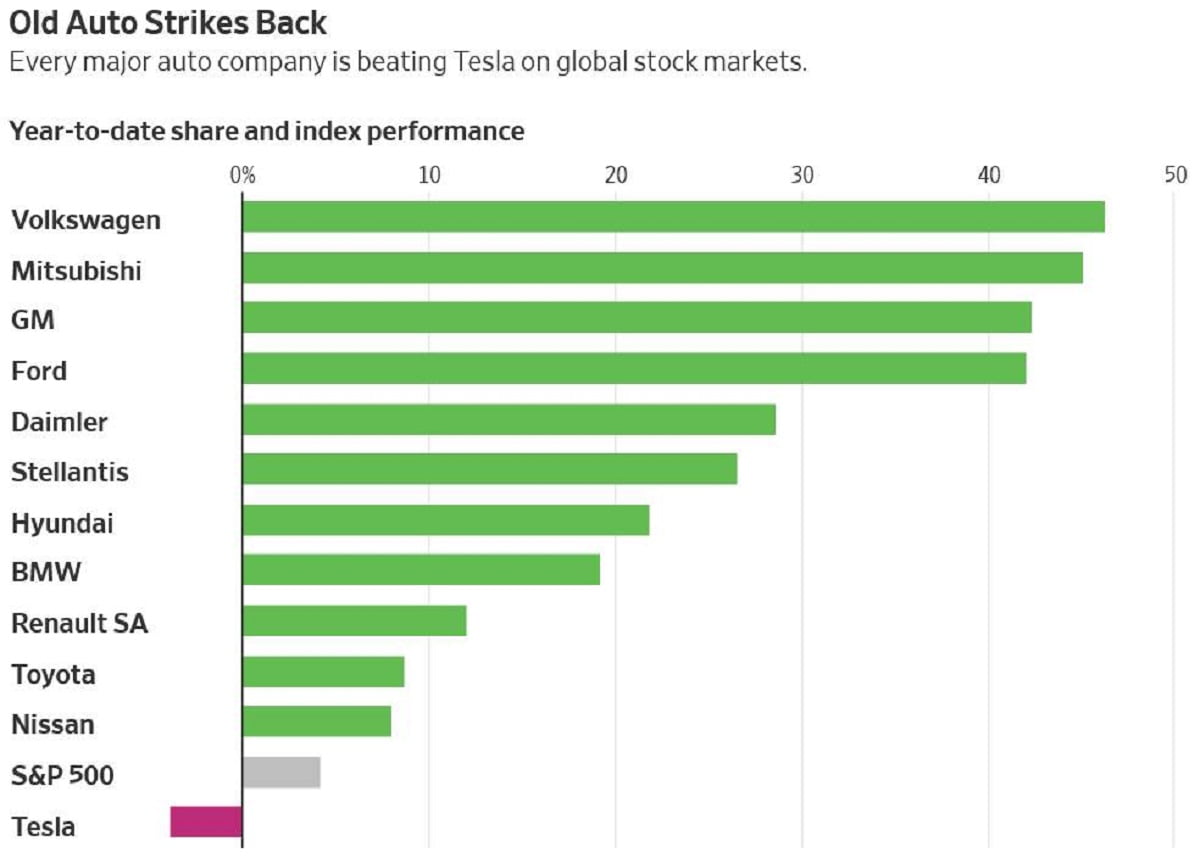 The U.S. stock-market craze for all things to do with electric vehicles is showing its first signs of crossing the Atlantic.

3) I’m super bullish on electric and autonomous vehicles, for reasons I explain in this video, but fund manager Rob Arnott is almost certainly correct when he argues that the major EV companies, as a group, can’t possibly grow into their enormous combined valuation, so investors will need to be smart and selective: Rob Arnott Warns of ‘Big Market Delusion’ in Electric Vehicles. Excerpt:

The electric-vehicle craze is a classic sign of a “big market delusion” that has entrapped investors throughout history, according to quant pioneer Rob Arnott.

The 600% rally in a year that sent the combined value of eight manufacturers to $1 trillion is pricing every firm as a major winner in the clean-energy boom.

4) Tesla’s recklessness may be catching up with it. Its Autopilot is great technology, but they’ve dangerously oversold it… Tesla Crash Suspected of Involving Autopilot Draws Probe. Excerpt:

Some safety advocates and other auto experts have criticized Tesla as not doing enough to prevent drivers from relying too heavily on the driver-assistance system or using it in situations for which it isn’t designed. They have also said that the term “autopilot” can give drivers a false sense of confidence in the abilities of the system, which helps with functions such as steering and matching a vehicle’s speed to that of nearby traffic.

On this day in 2012: 60 Minutes interviews Elon Musk about SpaceX.

“I don’t ever give up. I’d have to be dead or completely incapacitated.”pic.twitter.com/yD16kBFJio

Lordstown Motors' CEO Appears In Public In A Helmet

6) Lordstown Motors (RIDE) fell 14% today on this news: Lordstown Motors Says It Is Cooperating with SEC Inquiry. The CEO went on CNBC today and lied his a** off – just watch him bob and weave… Here’s Muddy Waters’ tweet about it:

It's a bad sign when the CEO does public appearances in a helmet: $RIDE / NQ Mobile / Cartman pic.twitter.com/BKvoEsZyvO