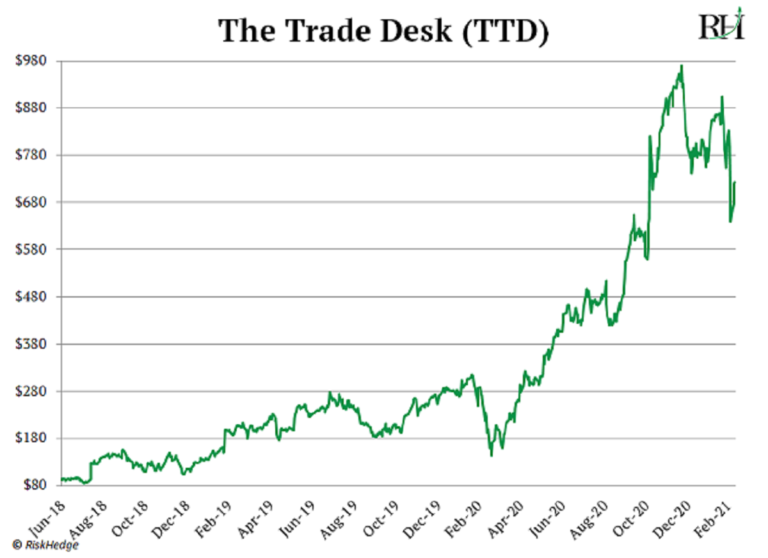 They laughed Steve Jobs’s team out of the room. In early 2009, Apple’s founder wanted to give app developers a way to make money by allowing them to sell ads.

Keep in mind, most Americans didn’t even own a smartphone at the time. Mobile ads were the Wild West. But Jobs demanded his team get the world’s best brands to sign multimillion-dollar deals.

The first advertising agency execs they visited literally giggled as they made their pitch. Ads on a tiny phone screen? Are you serious? Apple’s ad team eventually met with Citibank, which bought the first ever App Store ads. The team phoned up Jobs to tell him about the $1 million contract. Jobs wasn’t impressed and told them: “I didn’t say a million dollar deal; tell them we’re not taking it unless its $10 million.”

This was the starting line for one of the decade’s biggest disruptions.

Jobs got exactly what he wanted. Citibank signed the first $10 million contract. And the growth of ads on smartphones has been relentless ever since.

According to top media agency Zenith, companies will spend over $220 billion on mobile ads this year. Longtime RiskHedge readers know a tectonic shift completely flipped the ad industry on its head over the past decade.

Before the internet took off, we watched TV and read magazines for entertainment. So advertisers ploughed money into TV commercials, full-page newspaper ads, magazines, billboards, and radio. In 2000, 90 cents of every ad dollar went into TV and print.

But today, 3.8 billion people use a smartphone. So, marketers now spend billions of dollars trying to grab our attention online. In fact, the world’s largest ad agency, WPP, found digital ads accounted for over 50% of total spending for the first time ever last year: 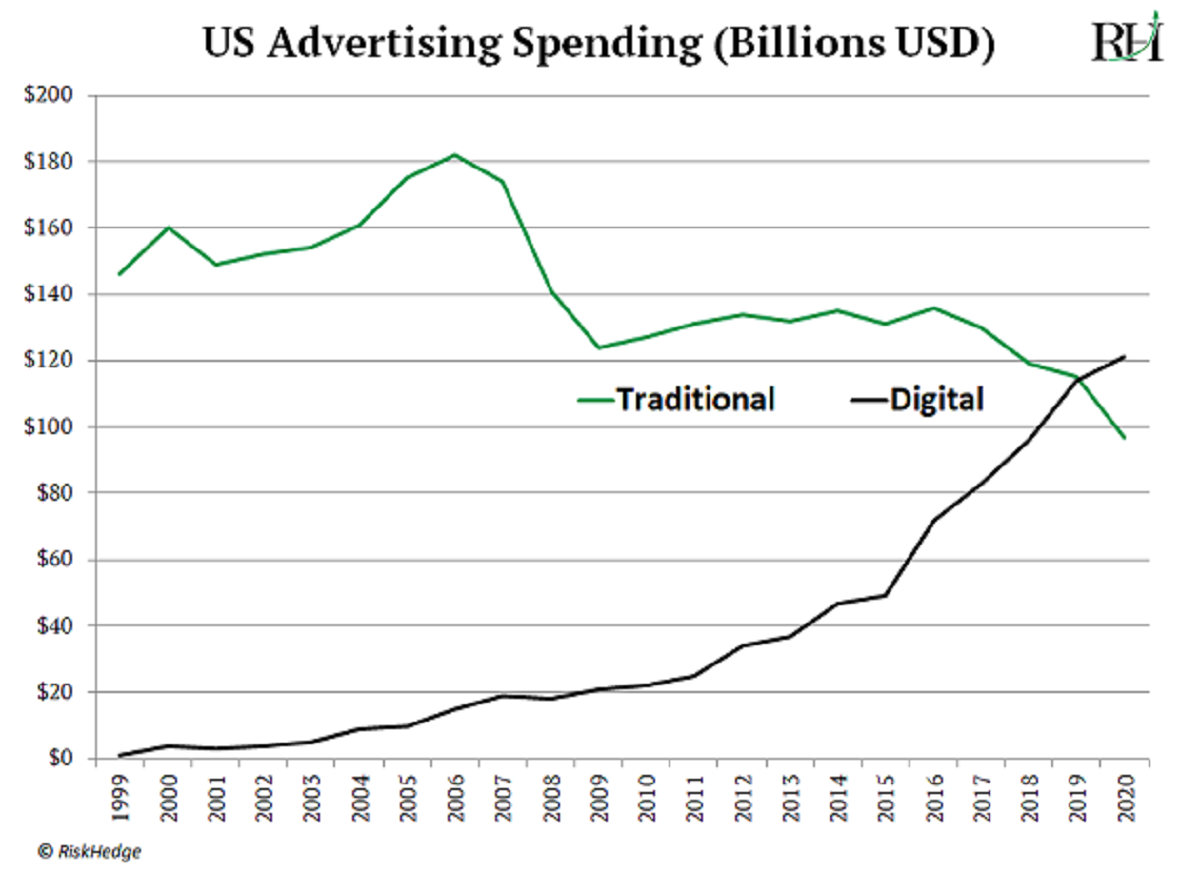 Coronavirus Pandemic: A Boon For Snap

Andrea Romo earns $12.50/hour working at Lowe’s in Albuquerque. She often uses the social media app Snapchat, which lets you record videos and send them to friends. And last Thanksgiving, she uploaded a clip of her sister deep frying a turkey.

Two weeks later, Andrea discovered the video was so popular it earned her about $500,000. Just like Facebook, Snapchat makes virtually all its money by selling ads. It then uses this money to pay folks who make hit videos.

COVID has been a boon for Snapchat (SNAP). Advertisers are spending more money than ever on its platform. And the stock handed investors 5X gains over the past year: 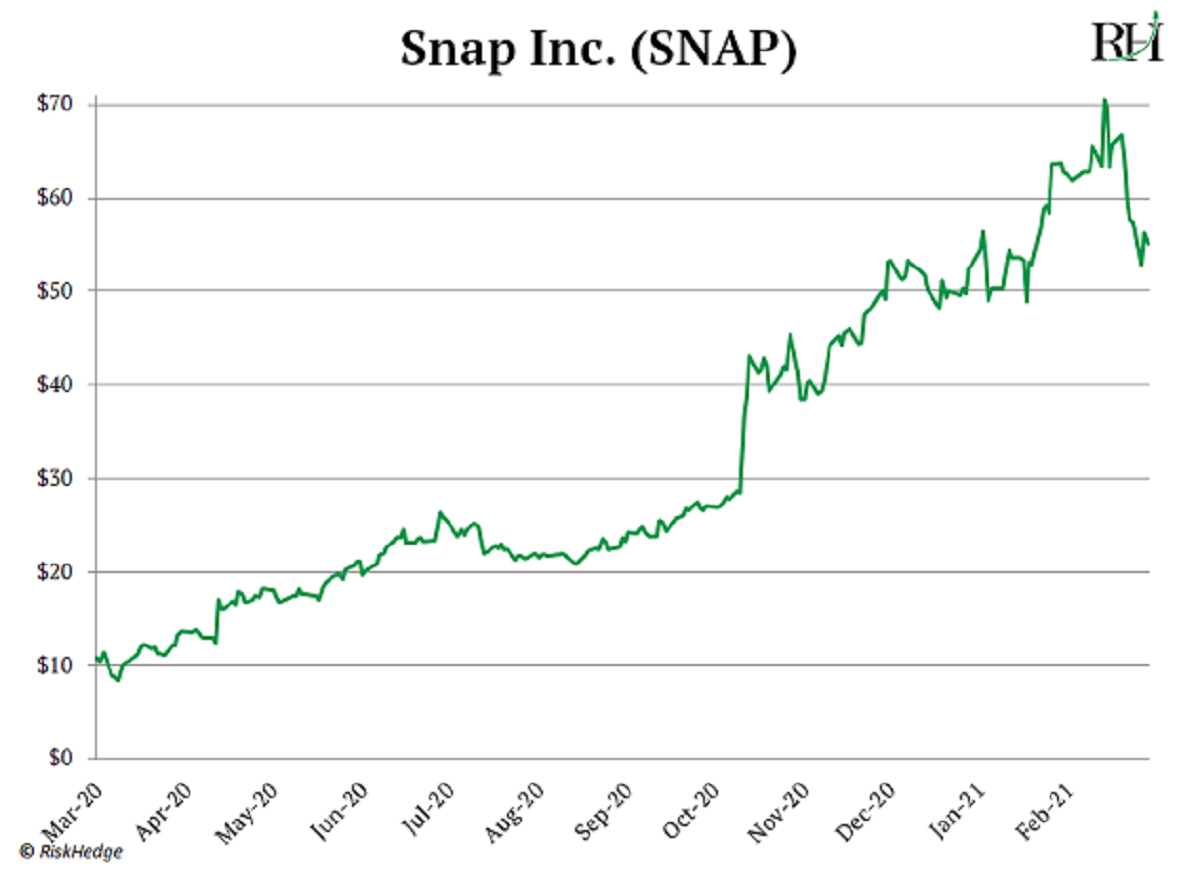 COVID’s fundamental disruption was moving almost everything online. Over the past decade, internet shopping grew at a steady 15% pace each year. Last year, growth tripled. Here’s the thing: folks often fail to connect the dots between two related disruptions. We know the whole world moved online during the pandemic. Now we’re staring at our screens all day.

Advertisers follow eyeballs. So it makes sense that companies who sell online ads like Snapchat are flush with cash. Spending on traditional ads plunged 15% last year. But online ad platforms had their best year ever. For example, Google sold a record $147 billion worth of ads last year. This big shift to online advertising has also lit a spark under one of my favorite disruptors.

Longtime RiskHedge readers will remember I highlighted The Trade Desk (NASDAQ:TTD) back in 2018

The stock was selling for less than 100 bucks when I first wrote about it. It’s soared over 650% since then, as you can see: 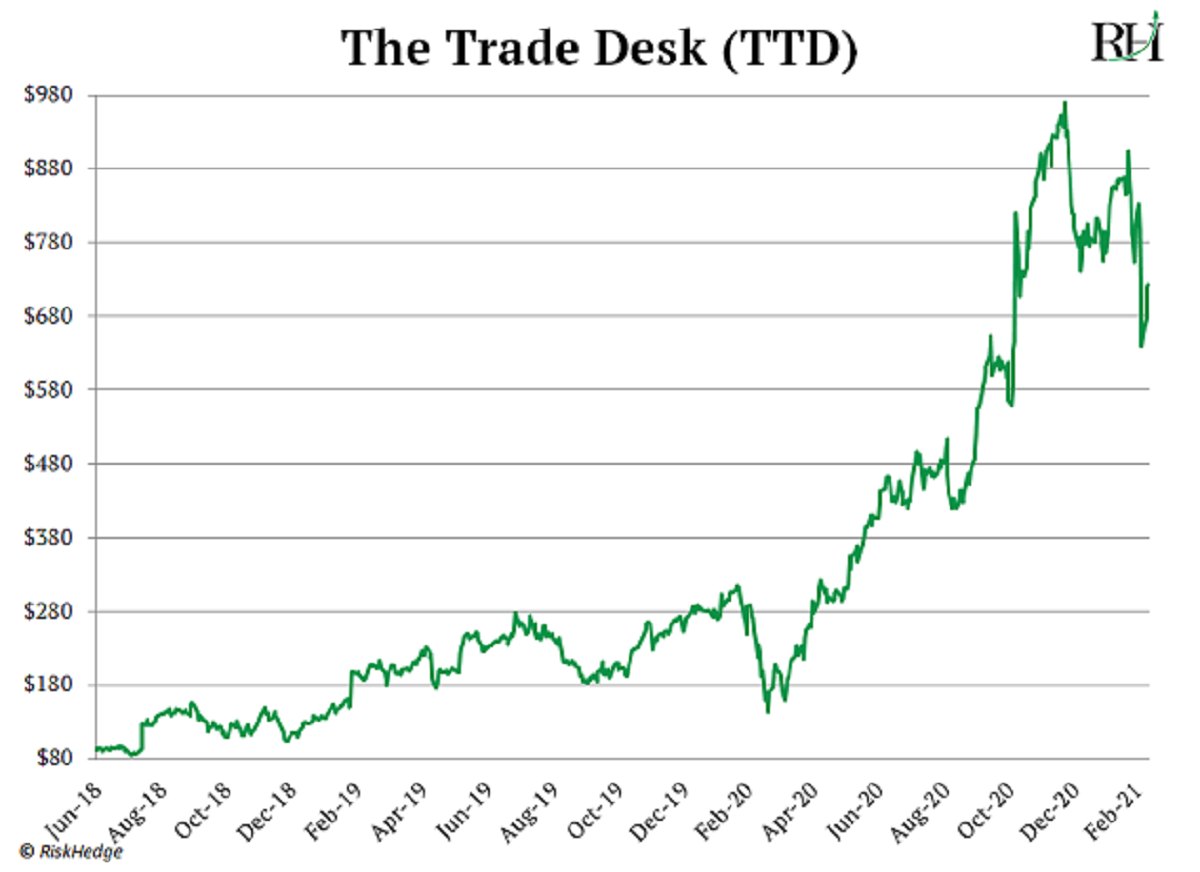 The Trade Desk Inc (NASDAQ:TTD) runs a “stock exchange” for digital ads. The key to understanding online advertising is that it’s ferociously competitive. There are over 500 billion digital ad auctions every day. Advertisers buy space on the internet to display their ads at these auctions.

Buying the right ad space is absolutely crucial. Get it right, and your ad will thrive, generating many multiples of what you paid. Get it wrong, and your money goes down the drain. In short, The Trade Desk helps advertisers buy the right ads. And 2020 was a banner year for the disruptor.

Marketers spent a record $4.2 billion on its platform. And the number of firms buying over $1 million worth of ads has more than doubled.

The world’s largest store just partnered with The Trade Desk. No company on earth can match Walmart’s size and scope. It’s still one of my top disruptors to buy today. Walmart has over 4,750 locations in the US alone. And according to the NPD Group, 9 in 10 Americans shopped in its stores at least once in 2019.

Millions of folks pass through its doors each day. So its shelf space should be extremely valuable, right? That’s why Walmart hired The Trade Desk to turbocharge its ad business. Advertisers have long been able to buy ads on in-store TV walls, self-checkout screens. and Walmart.com. But Walmart didn’t let marketers choose where their ads would be shown, which turned many of them off.

Walmart’s Partnership With The Trade Desk Is A Game Changer

Using The Trade Desk’s platform, ad buyers can choose where and when their ads will appear… down to the exact aisle. This is a win-win for all sides. Big brands like P&G can sell more Gillette razors and Tide detergent. And it cracks open a new multibillion-dollar revenue stream for Walmart.

The Trade Desk’s growth over the past couple of years is impressive. In 2013, it achieved its first million-dollar month. Last quarter, it sold $525 million of ads per month. That’s a 525X surge in just six years.

This disruptor still has a huge runway for growth ahead. Walmart is only the first big name to partner with The Trade Desk. I bet we see many more follow suit over the coming years. The Trade Desk’s stock has been red hot over the past couple of years. But it plunged during the recent tech sell-off, which has handed long-term investors a great entry point.