The blockchain economy is growing at a phenomenal rate from the last few years due to a broadening adoption curve, awareness, and interest from institutional and retail investors. However, most of this $1.5 trillion economy is dominated by a handful of big platforms that exist mainly in isolation due to a lack of cross-chain communication and interoperability.

When platforms or companies exist in silos, it encourages monopolization where they grow bigger and bigger to capture the majority of the market share. If you're not convinced, look at Google and Amazon! This monopolistic behavior kills innovation and makes it difficult for smaller players to establish their positions in the market.

If we look at the current state of the cryptocurrency ecosystem, Bitcoin and Ethereum dominate the market with a combined market share of over 62% as of writing. However, this monopoly effect doesn't end here as the remaining 18% of the market is captured by eight different projects, which means that only ten projects control 80% of the entire $1.5 trillion cryptocurrency market. 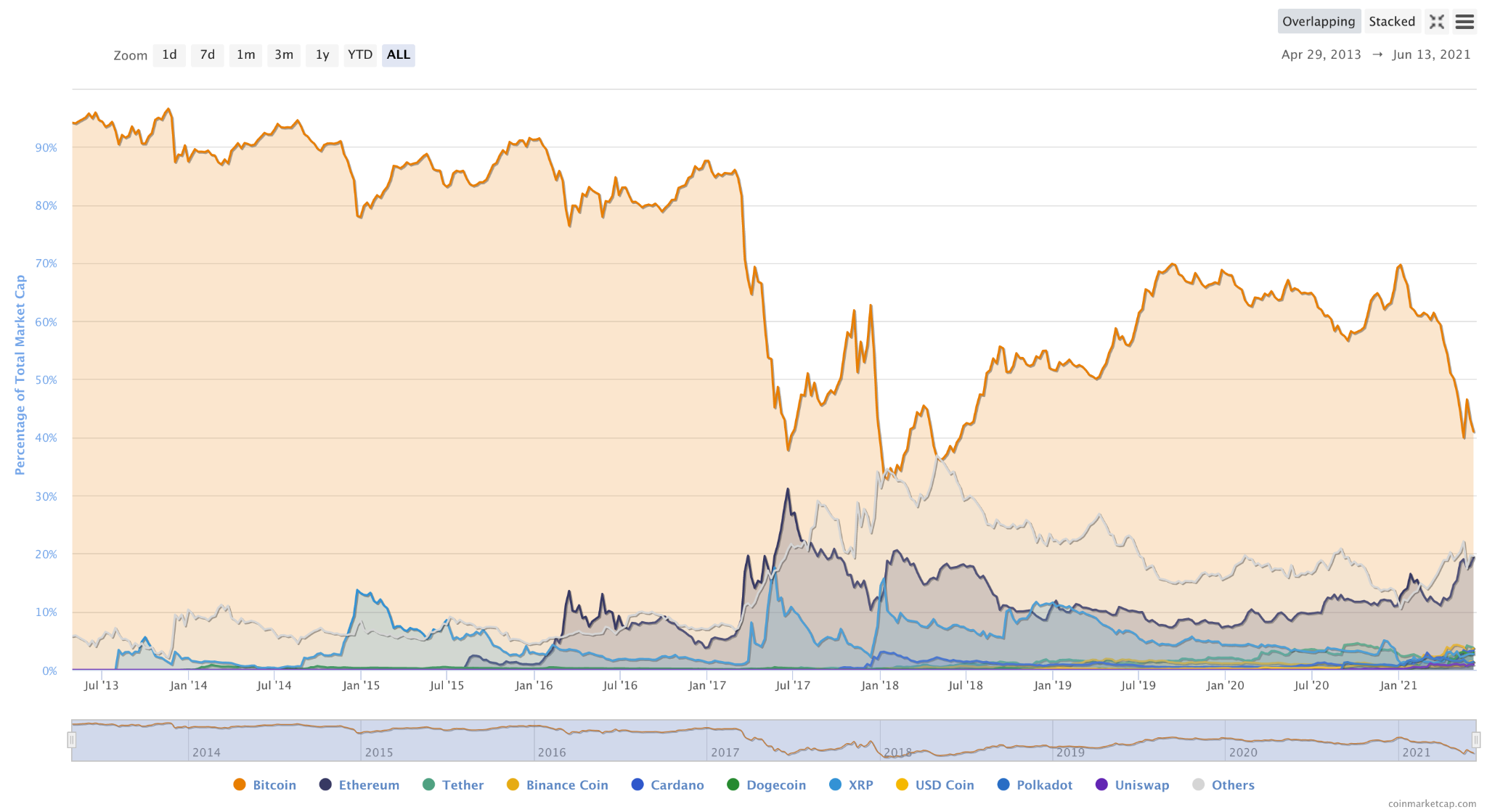 This monopolistic behavior in the blockchain space isn't intentional since we are talking about a decentralized environment where no single entity governs the market with its power. This monopoly effect can be reduced by enabling true cross-chain interoperability solutions to connect these big siloed blockchain networks, and allow many innovations to leverage the features of these platforms instead of re-inventing the wheel every single time.

To help build an interconnected ecosystem, several blockchain platforms today are developing solutions to enable true cross-chain interoperability between different public chains. They all have a unique approach with a robust architecture that enables these siloed chains to communicate with each other and transfer assets seamlessly.

Let's discuss some of these platforms and how they enable cross-chain interoperability.

Polkadot is a meta-protocol or a Layer-0 protocol where you can build and launch your own custom blockchains. These blockchains are called 'Parachains', which can seamlessly communicate and perform cross-chain asset transfer on all the parachains launched on the Polkadot network.

Similar to the Ethereum network, where you can deploy and launch smart contracts, you can launch purpose-built and niche-focused blockchains on the Polkadot network. To connect the existing blockchain platforms like Ethererum and Bitcoin, Polkadot has built cross-chain bridges so each parachain on the Polkadot network can communicate with them and transfer value. 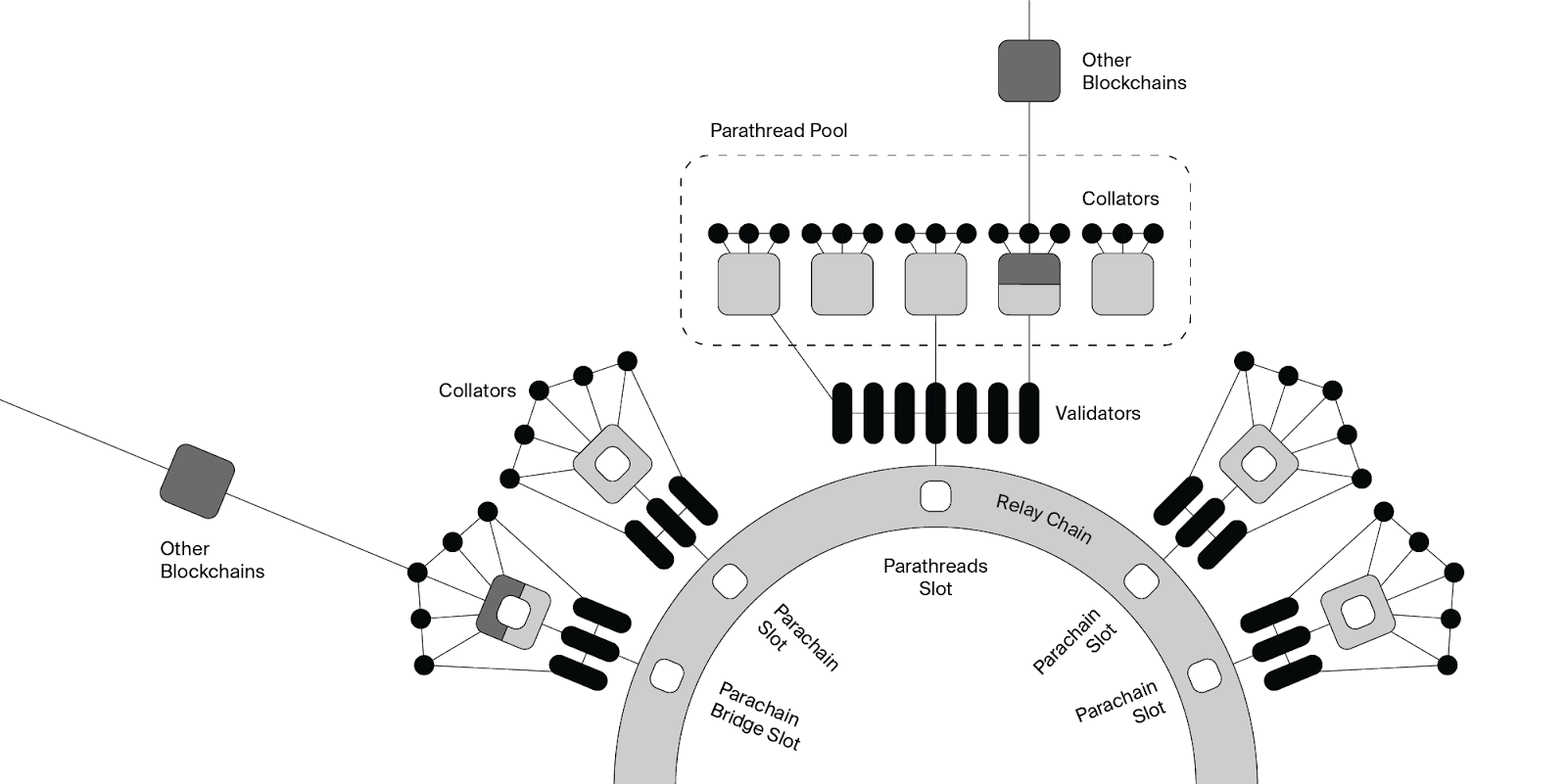 Wanchain is a blockchain interoperability platform that provides a cross-chain infrastructure to connect all the isolated public and private blockchains, just like WAN (Wide Area Network) connected the isolated LAN (Local Area Networks). This interconnected blockchain ecosystem will pave the way for many innovations in the $69.9 billion Defi economy, enabling Open Finance in its true essence through decentralized cross-chain applications.

Wanchain is secure by Galaxy Consensus, a proprietary Proof of Stake consensus algorithm where validating nodes are required to stake Wanchain's native WAN tokens to validate transactions on the network. In addition, all the cross-chain bridges on the network are maintained by Wanchain's Storeman Group, which are independent and unified decentralized collateral pools. 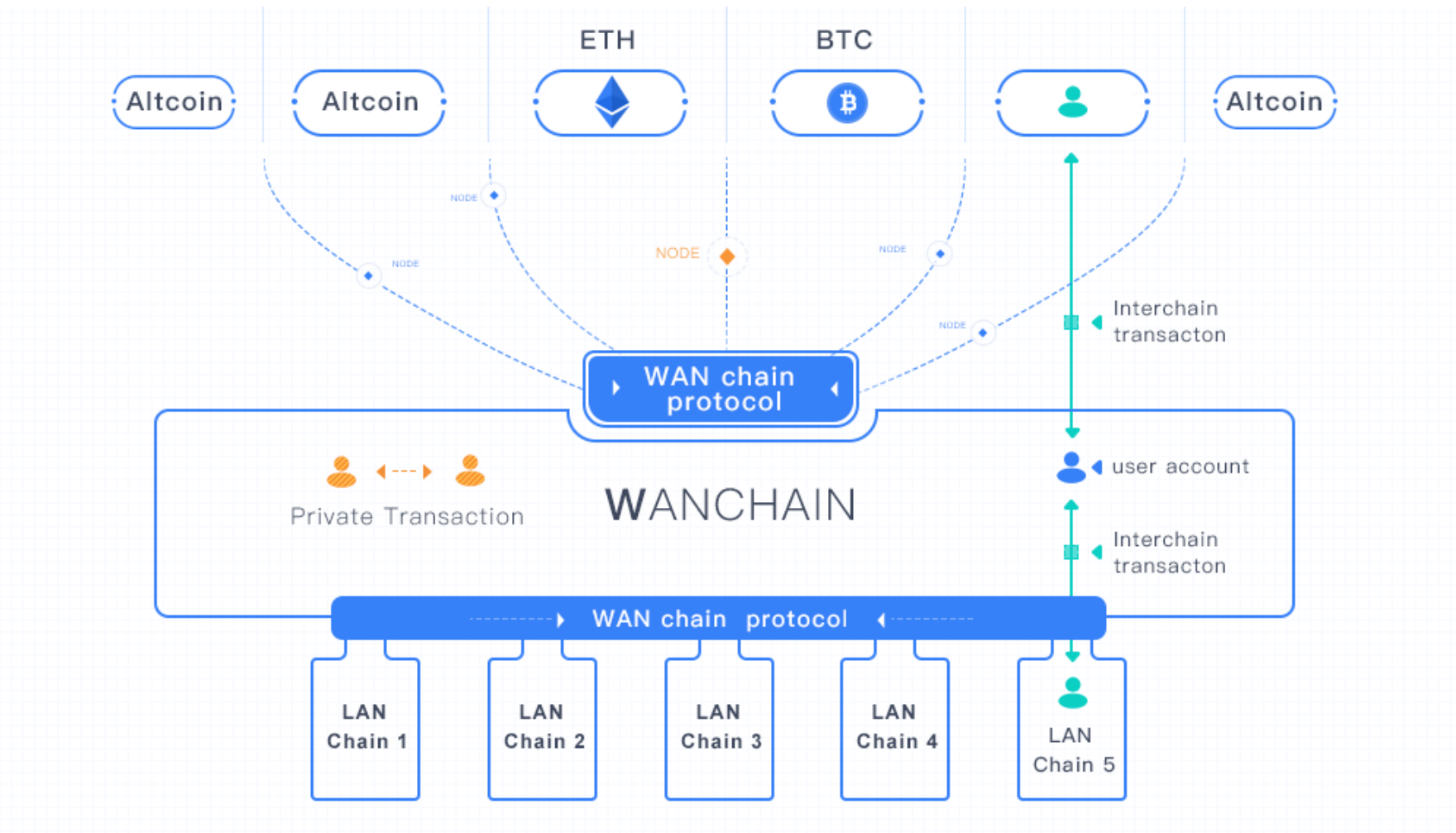 Wanchain built the world's first decentralized direct bridge between BTC-ETH and has been building its cross-chain infrastructure since 2017. Today, Wanchain has built decentralized bridges to connect EOSIO, Binance Smart Chain, XRP Ledger, Bitcoin, and Ethereum, with Polkadot and other chains in the pipeline.

As part of their development roadmap, Wanchain is planning to roll out an upcoming Ethereum Layer-2 solution called X-Rollup, and they are constantly working on adding cross-chain bridge support for various public and private blockchains to drive adoption.

Cosmos is a decentralized network of parallel blockchains that are independent and interoperable with each other. Both Cosmos and Polkadot network have a similar design approach, where custom blockchains can be launched within the ecosystem and connect to external platforms via bridges. However, there are some subtle differences between the two.

The Cosmos team released Tendermint back in 2014, which is a Practical Byzantine Fault Tolerant (PBFT) state machine and a peer-to-peer network gossiping protocol. Tendermint takes care of all the consensus and networking for each independent parallel blockchain on the Cosmos network.

To enable cross-chain communication, Cosmos has built the Inter Blockchain Communication (IBC) protocol that allows all the blockchains on the Cosmos Network to interact with each other via a central hub called Cosmos Hub. Cosmos calls it the Zone and Hub model, where each blockchain is a zone that communicates with others via a central Hub. 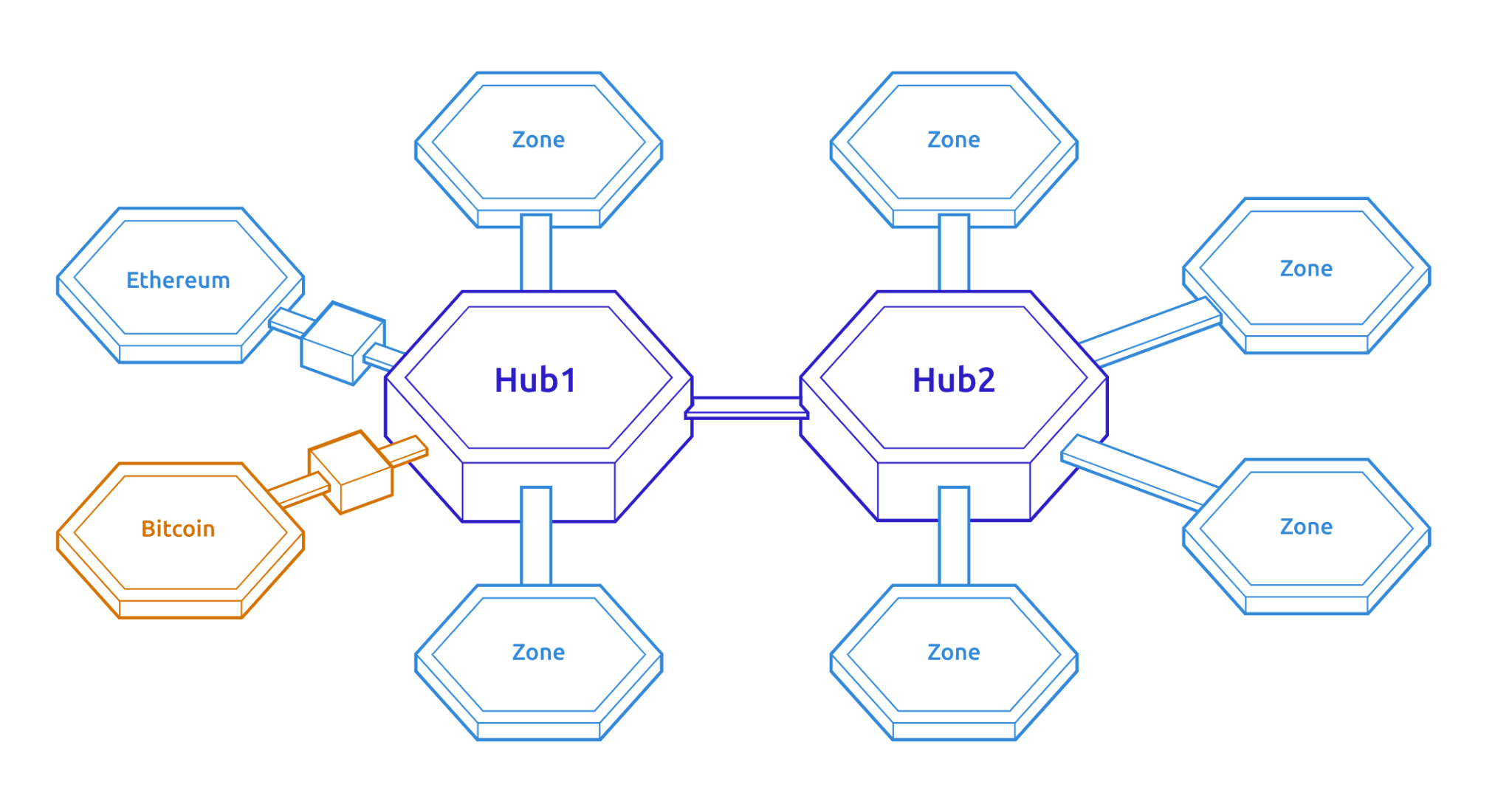 To allow interoperability with external networks like Bitcoin and Ethereum, Cosmos Network has special kinds of bridges called Peg Zones. These Peg Zones are run by a set of validators that approve the cross-chain transactions through locking and unlocking pegged assets. Unlike the bridges used in Polkadot, the design of the Peg Zones in Cosmos Network is fairly complicated and mostly theoretical at this point.

Polygon was previously called Matic network, which was a simple Ethereum Layer-2 scaling solution. The team re-branded and re-launched the platform under a new name, Polygon. This revamped platform aims to create what they call "Ethereum's internet of blockchains", i.e., a multi-chain ecosystem and a network of Ethereum-compatible blockchains.

Polygon has a developer-focused approach, where it allows developers to easily launch their Ethereum compatible blockchains by leveraging different modules for consensus, governance, virtual machine implementations, and execution environments.

There are two kinds of chains that you can build on Polygon; standalone chains and secured chains. Standalone blockchains are self-sovereign and rely on their own consensus and security, whereas the secured chains inherit the security from the Matic proof-of-stake (PoS) sidechain. 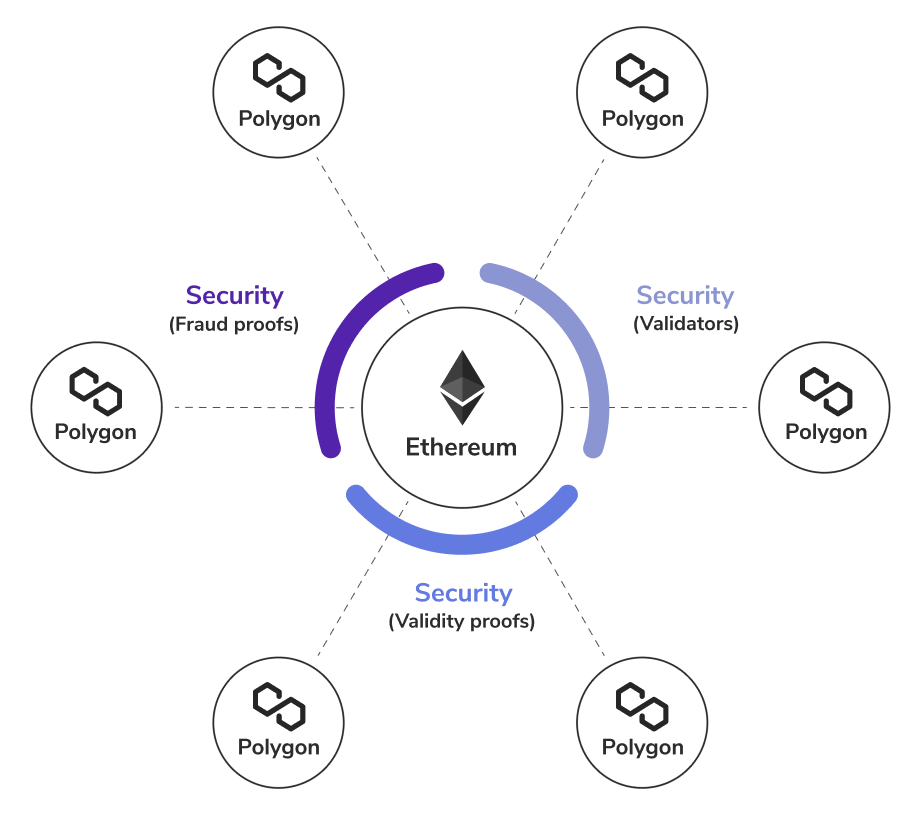 However, all the standalone and secured chains launched on Polygon today derive their security from the Matic PoS sidechain, and they will be separated with a later upgrade. Polygon also supports Matic Plasma, a Layer-2 scaling solution, and the team has plans to bring in more Layer-2 scaling solutions like zk Rollups, Optimistic Rollups, and Validum Chain. Polygon only focuses on the Ethereum ecosystem, and we are yet to see its traction.

Fusion is yet another cross-chain interoperability platform focused on financial innovations. Fusion has built Decentralized Control Rights Management (DCRM), a decentralized custodian model to carry out cross-chain and cross-system transactions.

DCRM is the distributed storage of private keys divided into fragments (shards) and stored across a network of nodes. In a traditional custodian model where a user initiates a cross-chain transaction, the user's funds are locked, and the keys to unlock those funds are stored on either a centralized server or custodians. 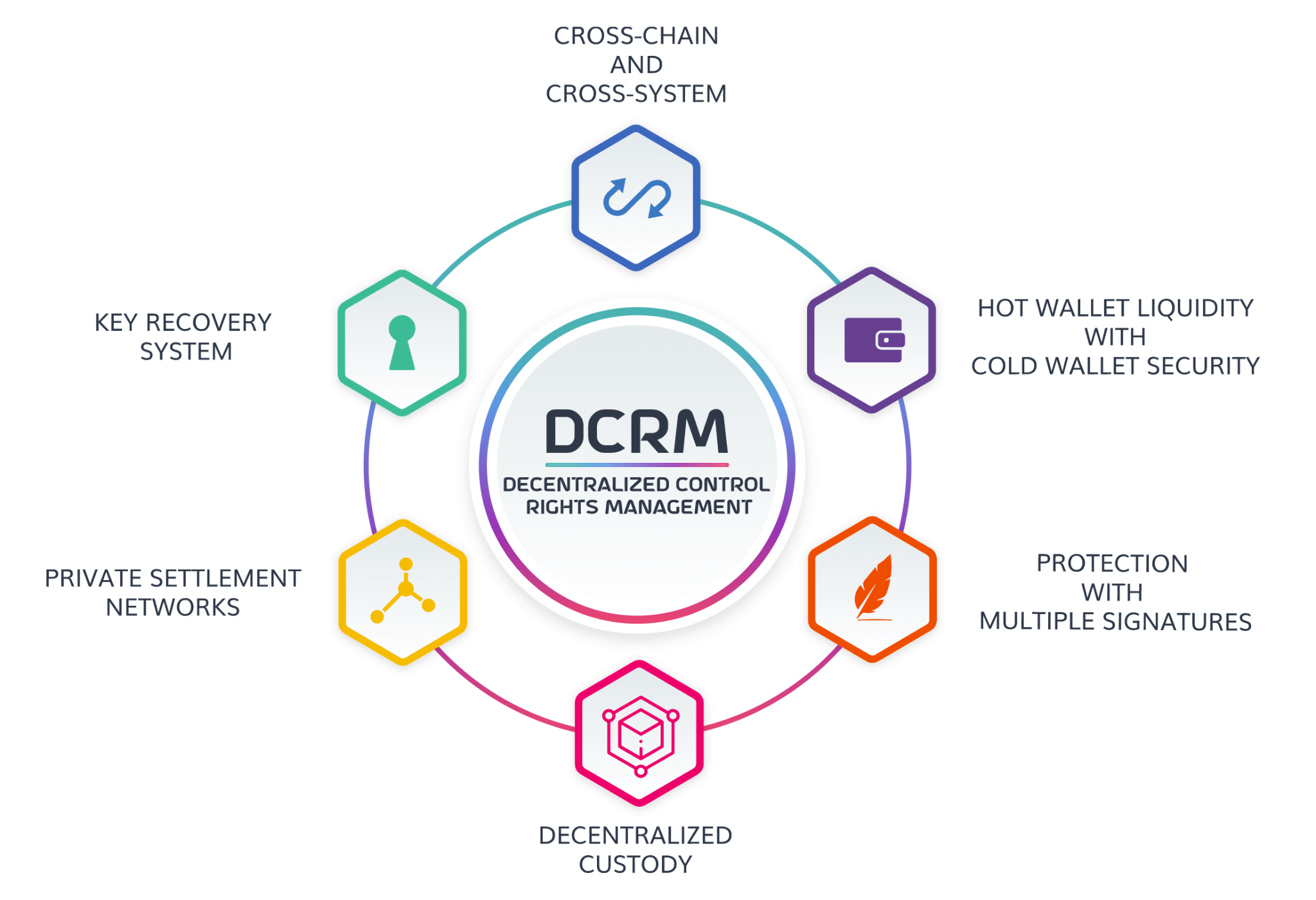 In DCRM, however, the private key is divided into fragments (shards), and each shard is encrypted and then distributed across the network. DCRM ensures the security and protection of the user's funds. In addition to that, Fusion is also Ethereum compatible and supports smart contracts that can leverage the security and interoperability offered by the platform.

Fusion uses a variant of the Proof of Stake consensus mechanism called Ticketed Proof of Stake (TPoS) to secure the network. This custom-built TPoS algorithm enables Fusion to achieve 15 seconds block time and supports 2500 to 3000 TPS, suitable for large-scale and complex applications.

Cross-chain interoperability is the next big thing in the current fragmented decentralized ecosystem we see today, as it will reduce the monopoly effect and allow innovators to leverage the strengths of the existing platforms to create applications for financial inclusion.

Haroon Baig is an Ex-Microsoft hire, a coding geek turned freelance researcher and writer at Decentralised Lab. He works with companies of every size in the blockchain space to establish, expand, and improve their online footprint through his writings. He got involved in the crypto space back in 2012 and was fascinated by the underlying technology. Since then, He has been educating people about this space through his content.