CEO Leslie Roy Moonves walked out of CBS this week after a settlement agreement was decided between the media firm and controlling shareholder National Amusements. The investor holds a nearly 80% stake in the company and had been accused by CBS of abusing its control by threatening the independent corporate governance of the company after it had pushed for a merger with Viacom – a company it also holds a controlling stake in.

Due to allegations of sexual harassment and assault, Leslie Roy Moonves might receive a smaller severance package than the norm, despite being one of the media world’s highest paid CEOs. CBS will also donate $20 million of his compensation to organizations that support the #MeToo movement and workplace equality. His severance package will depend on an ongoing internal investigation into his behavior.

Now that Leslie Roy Moonves is out, the CBS board is being reshaped, with six new director additions, including three women, and a reiteration from Redstone to consider new bids from potential buyers.

Viceroy Research took a short position in Canada-based Pretium Resources, claiming that it is manipulating its gold grades to mislead investors. Viceroy alleged that Pretium’s mining results were distorted in a feasibility study compiled by Strategic Minerals, a firm owned by Sima Muroff, an investor previously accused of misappropriation of funds by the Securities and Exchange Commission.

The short seller also said government documents indicate that Pretium is moving at least double the bulk tonnage from one of its underground mines than it has disclosed. Viceroy said this suggests the company’s reported grades are inflated, that more mining waste is being dumped into local lakes, and that more explosives are being utilized.

Viceroy also noted that Pretium had about $700 million of debt during the second quarter of 2018, with an effective interest rate of about 15%. The short seller described the company’s equity as worthless and predicted the findings would cause massive trouble for the gold miner.

In response, Pretium filed an amended report, stating that the reported figure for the total volume of rock excavated at its Brucejack Mine during 2017 in its 2017 annual report is incorrect. The company posted the correct value on its website and said that all other data in the report remains unchanged.

The number of U.K.-headquartered companies that have been publicly subjected to activist demands by U.S.-headquartered activists (between January 1 and September 07). 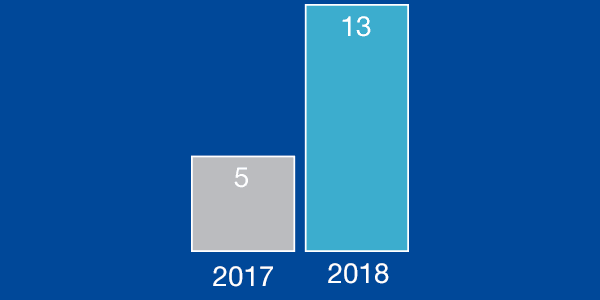