It was a good ending to a good year. The fund returned 18.1% in the fourth quarter, bringing our full-year return to 28.4%. Since inception, Alluvial Fund has delivered annualized returns of 15.7%. As a fellow investor, I am pleased with these results, but I believe the best times for Alluvial Fund are still ahead.

US markets have enjoyed a meteoric rise since late October, when positive COVID-19 vaccine results were announced. As in past periods of market ebullience, the fund has not kept up. Our small, obscure, often thinly-traded securities are rarely of interest to the large funds, passive indexes, and neophyte retail traders funneling billions into liquid equities. It doesn’t particularly bother me. I appreciate the opportunity to increase our investments in capably-led, well-capitalized companies at single-digit multiples of near-term earnings or cash flow. Sooner or later, the value these companies create accrues to shareholders.

The biggest contributor to Alluvial's returns this year was, of course, P10 Holdings. P10 remains our top holding and likely will for some time given the company’s reasonable valuation and ability to direct its substantial cash flow toward acquiring additional alternative investment managers. European internet and broadband providers were also a bright spot for the fund, with the market rewarding the successes of Intred SpA and Bredband2 i Skandinavien AB. Software reseller Rand Worldwide also contributed. I will discuss all of these, but first I want to shed some light on a few of our companies that did not participate in this year’s broad market rally despite strong operating results.

Nuvera Communications gets lonelier and lonelier. In recent years, small rural telecoms have
left public ownership one after another. Horizon Telcom and North State are now private. Otelco and Alaska Communications have agreed to be acquired. Once those depart, Nuvera will be the smallest remaining independent rural telecom (excluding Alaska Power and Telephone, which is half electric utility.) Nuvera shares ended the year just slightly ahead of where they began, but the business advanced by leaps and bounds. Nuvera spent the year reducing its already low debt and investing millions to expand and improve its fiber-optic network. Revenue and unlevered pre-tax cash flow (EBITDA) held more or less steady, but the firm’s revenue composition continued to shift favorably away from legacy landlines to broadband, video, and subsidy income. As recently as 2015, traditional telecom service still accounted for >40% of Nuvera’s revenue. In the most recent quarter, legacy revenues declined to below 20% of total revenues for the first time. As legacy revenues continue to run off slowly and the need for broadband service continues to grow, I expect Nuvera to return to modest top-line growth and increasing earnings. 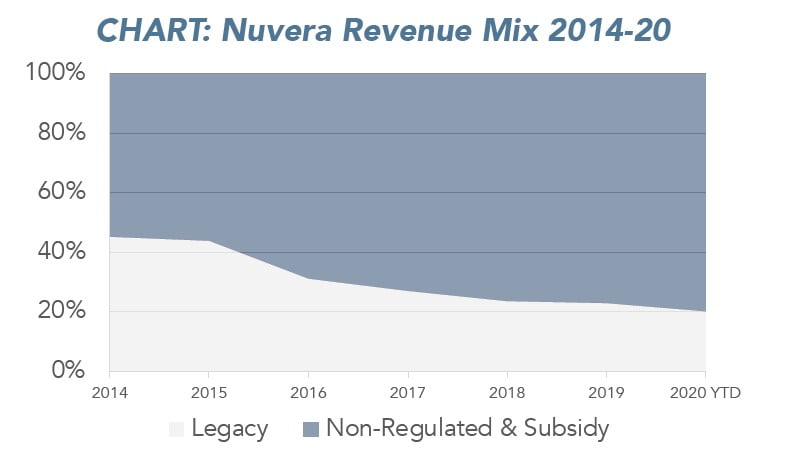 The quality and profitability of Nuvera’s operations will continue to increase and its financial leverage will continue to decline. I suspect private equity firms will give the company a close look this year, if they are not already doing so. Private equity scooped up other Minnesota telco assets in 2020, including providers in close proximity to Nuvera’s operations. Nuvera would be a perfect target for an acquirer, especially considering the millions in public company expenses an acquirer could eliminate immediately.

My hope remains that LICT Corporation sees the light and buys Nuvera before somebody else does, but Mario Gabelli & Company seem content directing LICT to improve its operations and repurchase stock. LICT Corporation shares were also flat on the year, beginning and ending near $18,000. Over the last four quarters, LICT added 255 miles of fiber to its network and grew its broadband customers from 35,339 to 39,157, an increase of 11%. The company reduced its shares outstanding by 3.3% while increasing its net cash by $18.5 million thanks to strong cash flow and the sale of some non-core assets. Recently, the company has maintained unusually high cash balances as it participates in spectrum options. Once these auctions have completed, I expect the company to resume its aggressive share repurchase plan. Acquiring a good quality telecom of reasonable size would accelerate shareholder returns, but LICT’s management has earned my patience. I can hardly complain about the returns they have delivered while the fund has owned LICT.

Crawford United also treaded water in 2020 with shares ending the year slightly below where
they began it. COVID-19 walloped demand for the company’s aerospace components, but the company’s air handling and hose divisions picked up much of the slack. The marine industry has been hot with people choosing to social distance on lakes and rivers. Crawford’s Marine Products International has been selling hoses left and right to all those boaters.

Despite the slowdown, Crawford remains well-financed and on the hunt for new investments.
In September, Crawford participated in a capital raising by fellow industrial company Ampco-
Pittsburgh. While small, the investment has already performed well for Crawford. Just days ago, Crawford announced the acquisition of Komtek Forge, a Massachusetts metal-working shop producing highspecification products. The acquisition adds $7 million in revenue and will increase earnings immediately.

Shares of Crawford United are up on news of the acquisition. Despite the increase, shares still trade at less than 8x my estimate of normalized earnings. I expect the company to perform numerous additional acquisitions on attractive terms. As I have written before, there are thousands of unglamorous but profitable niche industrial companies, many lead by founders seeking to sell or retire. Crawford will not soon run out of places to employ its capital.