ValueWalk
Home Business All Tech Revolves Around This Disruptor 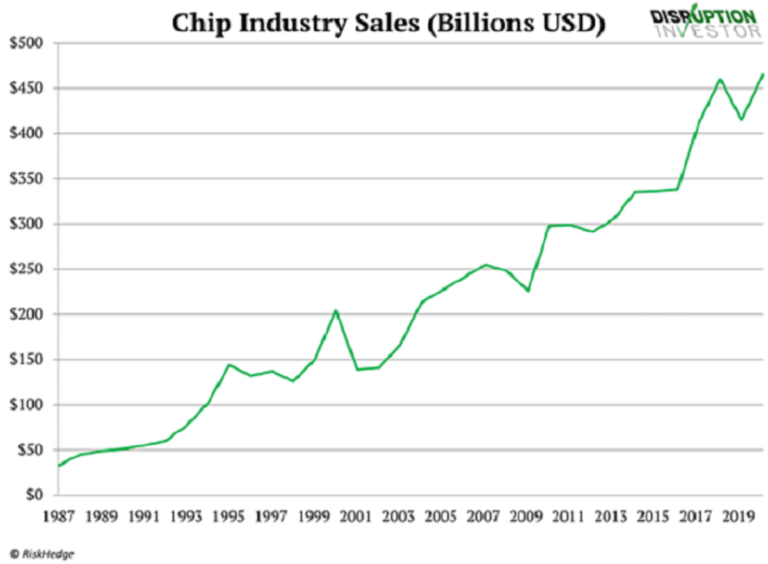 Silicon Valley is the birthplace of American tech. Giants like Google and Apple have become the face of California’s disruption hub. But long before we were typing Google searches into our iPhones, Silicon Valley got its name by creating the world’s most important industry: computer chips.

Computer chips, also called semiconductors, are the “brains” of electronics. These days, the entire world runs on semiconductors. There would be no iPhone, Amazon Webstore, or online messaging apps without them.

Temperature sensors in air conditioners are powered by tiny microchips. Rice cookers cook rice to perfection because built-in semiconductors control the heat. The chip inside pacemakers sends electrical pulses to the heart to keep it beating regularly.

From flying across oceans to hailing a ride on our smartphones when we land; streaming movies to buying stuff online; from checking out groceries to paying for dinner with your credit card: every modern system runs on chips.

You can’t grab a packet of microchips off the shelf at Walmart. But the latest cameras, TVs, washing machines, ovens, and refrigerators are all made “smart” by semis. In 2019 there were 300 billion computer chips sold. That’s roughly 40 for every man, woman, and child in the world. And chip companies raked in $450 billion: 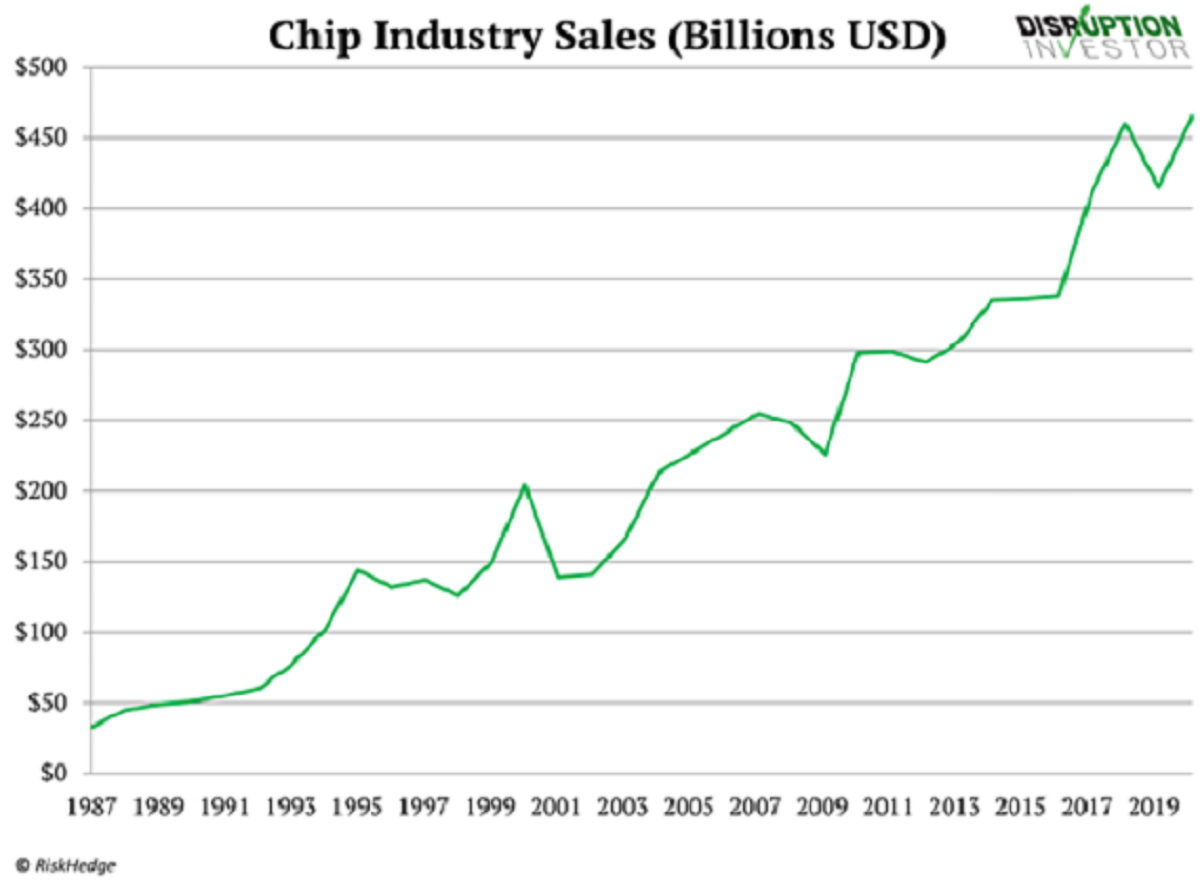 Virtually all of human progress over the past 60 years has been driven by computer chips becoming more powerful. Remember, chips are the brains of computers. And the more “brain cells” (transistors) a chip has, the faster it is.

The NASA supercomputer that sent Neil Armstrong to the moon in 1969 had 2,000 transistors. But get this: there are 11.8 billion brain cells packed onto the chip inside the new iPhone! Keep in mind, modern chips are no larger than your thumbnail.

All the tech progress in our lifetime has come from chipmakers figuring out how to cram more transistors onto these microchips. It’s how we can do things on our pocket-sized smartphones that IBM mainframes larger than a double-decker bus never could.

In short, semiconductors are the most important goods the world has ever known. They are the “fuel” powering every modern technology. And they are also key to every future disruption you can think of.

All Tech Revolves Around This Disruptor

You’re might already be familiar with chip giant Nvidia (NVDA). Nvidia, Qualcomm, and AMD are often referred to as “chipmakers,” but that’s a misnomer. These companies don’t actually make semiconductors. They’re more like architects, crafting blueprints and intricate designs for the chips.

When it comes to physically manufacturing the chips, they hand the reins to Taiwan Semiconductor Manufacturing Company (NYSE:TSM). TSMC is the world’s largest semiconductor manufacturer. Today, roughly 70% of top-shelf chips pass through its factories. And its list of clients reads like a “who’s who” in the tech world.

It’s made the chips inside every Apple iPhone and Mac since 2014. It’s produced Nvidia’s chips since the ‘90s. Giants like Qualcomm, Google, and AMD pay TSMC billions of dollars a year.

Most investors have never heard of TSMC, likely because it doesn’t make any chips of its own. It’s a dedicated manufacturer, only producing chips for big-name tech giants. Most of TSMC’s factories are on the island of Taiwan. My contact John told me its plant in Hsinchu is the most incredible building he’s ever set foot inside.

Once you pass through security, you have to throw on a protective cover-all suit with masks and gloves. Then you walk into an “air shower.” It’s a special chamber that blasts you with filtered air to remove any particles, like dust or hair.

The semiconductors TSMC makes are so fine, a single speck of dust can ruin them. Its so-called “cleanroom” must be thousands of times more purified than outside. John said the air is so sterile you have to drink gallons of water to stay hydrated.

What stood out most was how he described TSMC’s factory robots:

“A monorail-like track bolted to the ceiling loops around the factory. The shuttles zooming around above your head are carrying partly-finished chips, some worth more than solid diamonds.

These robots travel 400,000 km a day, combined. It’s the equivalent of running around planet Earth… 10 times!”

How TSMC Became the World’s #1 Chipmaker

TSMC recently stole Intel’s crown as the world’s leading chip manufacturer. Remember, all tech progress has been fueled by chipmakers cramming more transistors onto these tiny silicon wafers. This process is the closest thing to magic in the real world.

The chip inside Apple’s new iPhone has a transistor etched into it every 5 nanometers. That’s five billionths of a meter, or 1,000X smaller than a red blood cell.

Chipmakers refer to the task of producing ever faster chips as “recipes.” Making chips is just like baking a cake. You can have all the right ingredients (or machines), but you must get the mix just right for it to work.

Intel pioneered chipmaking back in 1968. And until recently, it always “cooked” the recipe correctly before anyone else. That allowed it to keep producing the world’s fastest chips.

But Intel was four years late to the latest chip innovation, allowing TSMC to leapfrog it for the first time ever. TSMC is now the only chipmaker in the world capable of producing leading-edge chips. And that’s transformed it into the world’s most important tech company.

Think about it: when Apple and Nvidia need new chips made, who will they call? It can only be TSMC. These firms spent roughly $550 million designing their latest chips. When you’re ploughing that kind of money into design, you will only hire the best chipmaker to build them. TSMC is like the sun, sitting at the center of the tech universe. Every company reliant on faster chips now revolves around it.

As chipmaking gets more complex and expensive, TSMC is leaving its rivals in the dust.

In 2001 there were 30 chipmakers vying for the #1 crown. Today, TSMC is the only chipmaker in the world capable of making leading-edge chips. Intel and Samsung are the only others left standing, and both are 1–2 years behind.

TSMC’s only problem is figuring out how to make more chips. Apple, Nvidia, AMD and a handful of others have booked out its entire capacity until the second half of 2021.

I’ve followed this disruptor for a couple years now, and it’s among the most consistent performers you’ll ever lay eyes on. It’s grown sales 15X since 2000, and business has gone vertical over the past decade: 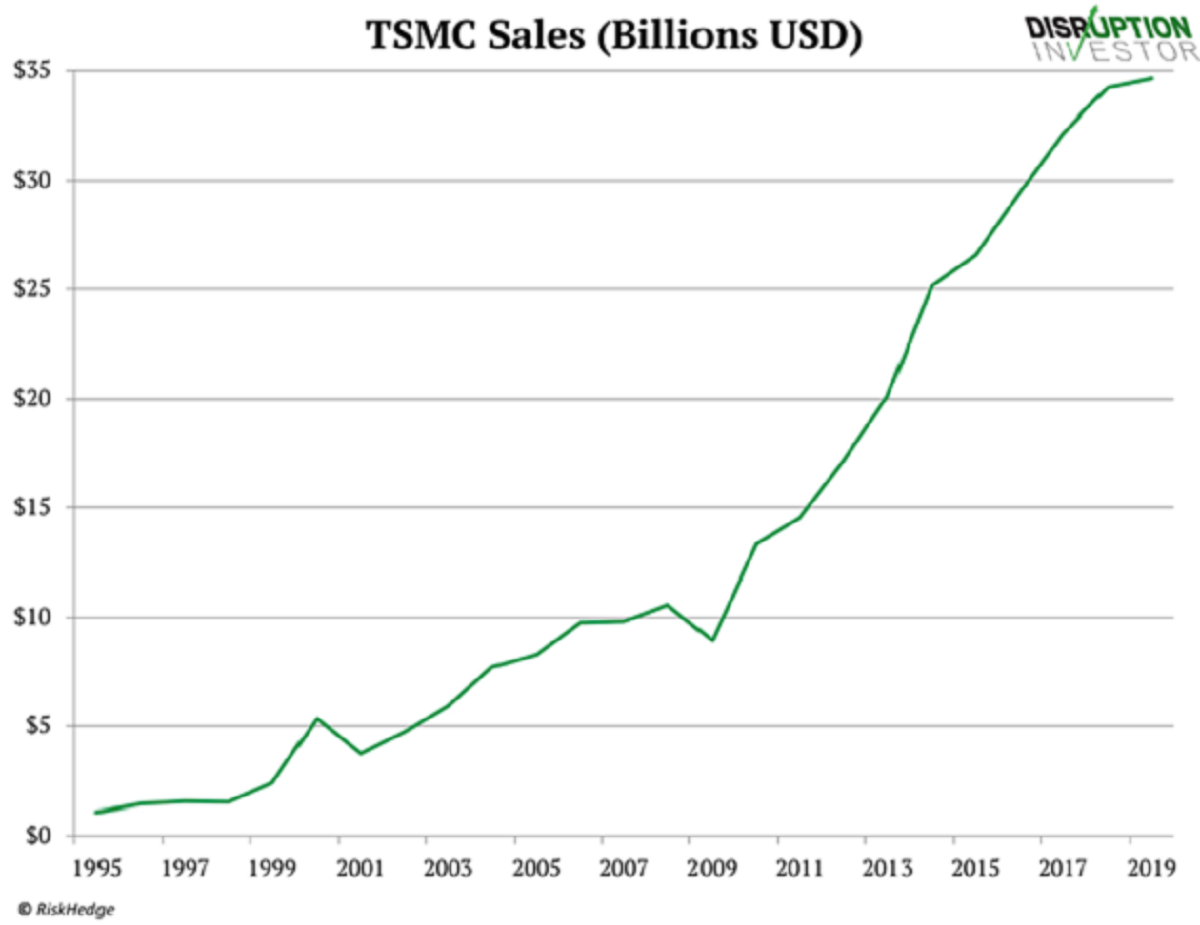 Remember, semiconductors are the “fuel” of our modern world. Every future disruption you can think of relies on faster and faster chips. As the principal supplier of those chips, TSMC is now the most important tech company in the world.

I call it a “forever stock.” Buy the stock today and lock it away for 10 years. Watch along the way as it compounds your initial investment into a small fortune.