ValueWalk
Home Business There’s A “Chip” Shortage: And TSM Holds All The Cards 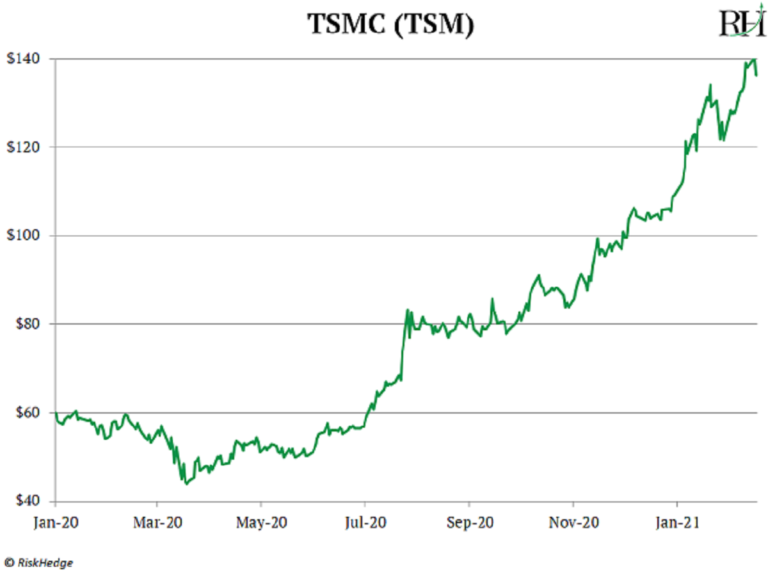 “You drove 1,000 miles just for this game?” Christmas 1988 was a stressful time for many American parents. Nintendo’s Super Mario Bros. 2 was the must-have toy that year. But copies of the hit videogame were as scarce as hen’s teeth.

ABC News ran a 20/20 special on the shortage called “Nuts for Nintendo.” They chatted to one dad who drove 1,000 miles from Indiana to NYC in the hopes of grabbing a copy.

“I’ve tried 7 stores a day for 3 weeks and still can’t find it,” he told reporters. They called it a “chip famine.”

Why was it so hard to get your hands on a video game? Longtime RiskHedge readers know computer chips, also called semiconductors, are the “brains” of electronics. There would be no iPhone, Amazon Webstore, or online messaging apps without them.

Semiconductors were also a key part in those old bulky Nintendo game cartridges you may remember from the ‘80s and ‘90s. And they were in short supply in 1988.

They were so scarce, employees in chip factories across Japan had to cancel vacations and work around the clock. In short, this capped the number of video games Nintendo could physically make.

Did You Hear About the Latest Shortage?

This wasn’t due to lockdowns or a COVID outbreak. The reason was a semiconductor shortage.

Automakers spent $43 billion on microchips in 2019. And did you know the average electric car is packed with roughly 3,000 chips? These microchips often cost just a few dollars, but you can’t ship a $50,000 car without them. Everything from power steering to dashboards and automatic brakes runs on semis.

In fact, GM and Ford both warned the shortage could cut profits by $2 billion this year. And now it’s hitting everything from PlayStations to iPhones.

I walked by a line 100 deep in Dublin city center last week. They were all gamers waiting to get their hands on the PlayStation 5. It was released last November, but Sony said a lack of chips curbed the number of units it could make.

Apple CEO Tim Cook told Reuters that shelves are empty in many of its stores as the supply of semiconductors is “very tight.” This semi shortage highlights something RiskHedge readers know well: The whole world runs on chips these days. In fact, semiconductor sales have only gone one way our entire lives: UP! 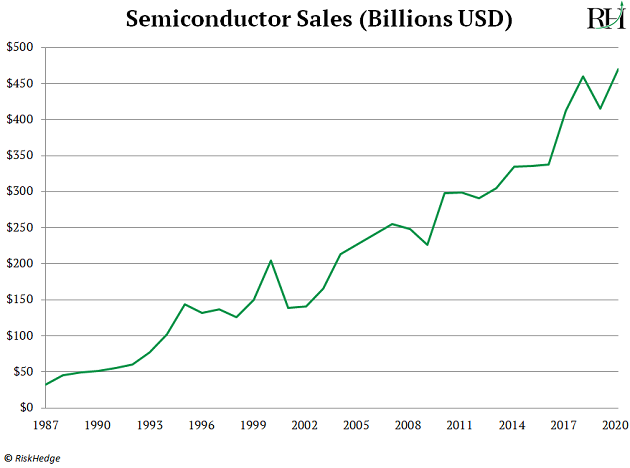 This has been a boon for chipmakers—now valued at roughly $5 trillion, combined. That’s five times what they were worth in 2016.

In December, I told my Disruption Investor subscribers about the most important building in the entire tech industry. Located near a 400-year-old temple in Taiwan’s seventh-largest city, this factory is cranking out the most valuable goods the world has ever known.

In the past six months alone, tech giants like Apple and Nvidia have spent $25 billion on the key product inside this factory. Driving around the facility would take 10 minutes walking it might take an hour—not that either is possible to “outsiders.” Security guards jump from their huts to check every incoming car.

To get inside the factory, you have to pass through TSA-grade security. Empty your pockets, slip off your shoes, walk through body scanners… and prepare to be patted down.

The factory is run by Taiwan Semiconductor Manufacturing Company (NYSE:TSM). And it’s ground zero for the chip shortage. Nvidia, Qualcomm, and AMD are often referred to as “chipmakers,” but that’s a misnomer. These companies don’t actually make semiconductors. They’re more like architects, crafting blueprints and intricate designs for the chips.

When it comes to physically manufacturing the chips, they hand the reins to Taiwan’s TSM. TSM is the world’s largest semiconductor manufacturer. Today, over 70% of top-shelf chips pass through its factories.

Remember, the whole world runs on chips these days. But TSM is one of the only chipmakers capable of making the cutting-edge chips Apple and automakers need.

In fact, demand for its chips is so high, capacity is booked out until this fall. This is why automakers like Ford and GM were forced to halt production. And why millions of kids couldn’t get their hands on a PlayStation 5 this past Christmas.

Semiconductors Are Now The Most Important Resource In The World: TSM Holds All The Cards

As I told RiskHedge readers last month, chips have surpassed oil as the world’s most valuable resource. Remember the energy crises in the 1970s when countries panicked about being cut off from Middle Eastern oil?

Now it’s a lack of computer chips that keeps them up at night. Germany’s finance minister even sent TSM a letter begging it to prioritize auto chips.

Cars are the perfect example of our increasing reliance on semis. Back in 2005, most cars didn’t even have one chip. Today, no automaker can do business without them.

And remember, semiconductor sales have gone straight up our entire lives. I’m betting this trend will continue for decades to come.

As the world’s top supplier of cutting-edge chips, TSM holds all the cards. In fact, the US government and European Union are both trying to woo TSM to build factories overseas. The disruptor’s only problem is figuring out how to make more chips.

TSM stock has shot up 140% over the past year. I’m convinced it’s headed well over $200/share in the coming years.

Investing in leading chipmakers like TSM is the surest way to make money over the next decade.