Investing along ethical lines is as old as religion: in medieval times the church forbade certain types of investments and Islamic funds do the same today; more recently the blacklisting of certain stocks by activists in the 60s and 70s due to links with the Vietnam War or nuclear weapons can be seen as the forerunners of modern ESG themes.

Over the last few years there has been a massive resurgence in ESG-investing due to increasing fears about climate change and changes in the demographic profile of investors, and this has led to record high inflows into sustainable funds in 2020 even despite the coronavirus crisis.

The increased popularity of ethical investing has led many funds to prioritize ESG values, sometimes even above fundamentals, and this is causing market distortions, whilst at the same time providing investors with unique opportunities.

When negative ESG news comes out about a company, funds now tend to overreact, heavily selling the tainted stock which then leads to exaggerated drawdowns, according to a recent Australian study that made use of RavenPack news sentiment data in its experimental framework.

“Investors’ over-emphasis on ESG considerations leads to markets overreacting when companies are the subject of negative ESG news,” say Bei Cui and Paul Docherty, researchers at Monash University in Melbourne, in their paper “Stock Price Overreaction to ESG Controversies”.

The resulting sell-off is normally only temporary, however, and stocks tend to recover quite strongly over the next 90 days. 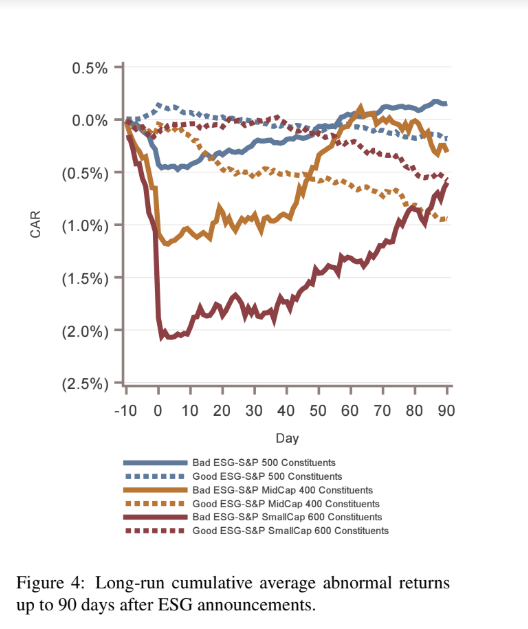 The phenomenon can, therefore, provide contrarian traders with an opportunity to buy the stock at a discount and then hold for a 90-day period before selling at a profit.

The overreaction is thought to be caused by fund manager’s fears that continued ownership will lead to outflows from disappointed clients withdrawing their capital.

From a  purely financial perspective, however, following the herd in selling after bad ESG news may not be the best strategy - if fund managers could merely hold on for 90-days and allow the price to mean-revert they could sell at a much better price.

Another cause of the overreaction is a psychological bias that leads investors to expect further negative news of a similar nature in the future. In actual fact  there is little evidence to support this and often the opposite is the case with companies tending to learn from their mistakes.

“When an ESG controversy occurs, investors give too much weight to the possibility that the event will be repeated and therefore overreact to the news,” say Cui and Docherty.

Overreactions are driven largely by the behavior of institutional investors and is, therefore, more pronounced for small-cap stocks because they tend to have higher institutional holdings.

The results of the Monash study complement a similar study conducted by RavenPack’s in-house data science team in 2019, which also found  a mean-reversion effect after bad-ESG news.

One interesting side-effect of the overreaction is that the affected stock’s price usually begins declining several days before the bombshell announcement, suggesting the news is leaked prior to more widespread dissemination.

The pre-trend rundown effect may be directly linked to options trading due to an observed increase in the price of OTM puts just prior to the release of bad ESG data, indicating probable option trader foreknowledge of a drop in the future stock price.

It is not easy to pick up on leaks, however, which by their nature are discrete, and “it is likely that this pre-event run down is because the events are difficult to cleanly identify,” says Cui.

Effect by Type of ESG News

Not all ESG events are made the same and some categories lead to deeper drawdowns than others.

The largest negative abnormal returns were related to corporate governance. This includes force majeure (where a firm seeks to be excused from performing its part of a contract), discrimination cases, where companies were sued for discrimination, and antitrust suit defendants where a company was accused of unfair business practices. 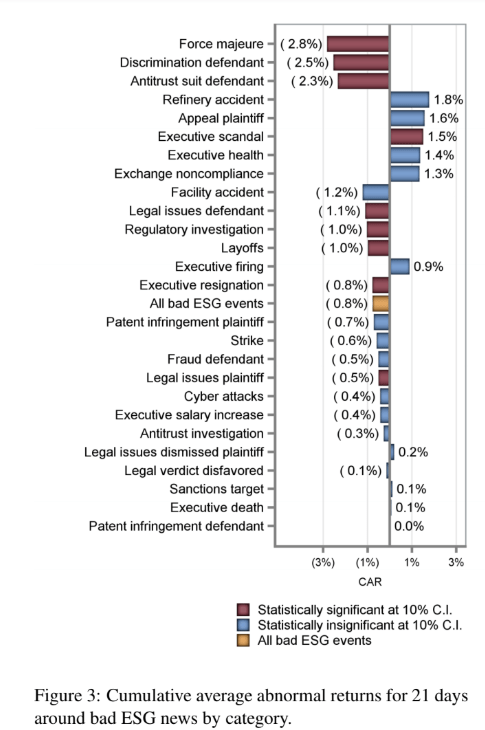 Interestingly, the effect works both ways, with previous research highlighting how socially responsible funds are less inclined to sell stocks with high ESG ratings, even after negative news on fundamentals.

Initially researchers focused on U.S. equities but a follow-up study by one of the original authors, focused on worldwide equities (also using RavenPack news analytics data) and found the same effect held true in most other markets.

A Cost to Ethical investing?

In theory, ethical investing should come at the cost of efficiency and provide a poor basis for an investment strategy, however, empirical studies suggest differently.

During the Coronavirus pandemic, for example, highly-rated ESG stocks have out-performed their less sustainable brethren.

In Q1 2020 70% of sustainable equity funds were in the top halves of their respective category league tables, and 44% the top quartile, according to data from Morningstar Inc investor service.

Sustainable funds also benefited from record-high inflows, gaining by $10.5bn  in Q1 2020, which compares favorably to the $21.4bn for the whole of 2019 - itself a fourfold increase from the previous year.