ValueWalk
Home Business The Most Unexpected Desired Silver Coin of 2020 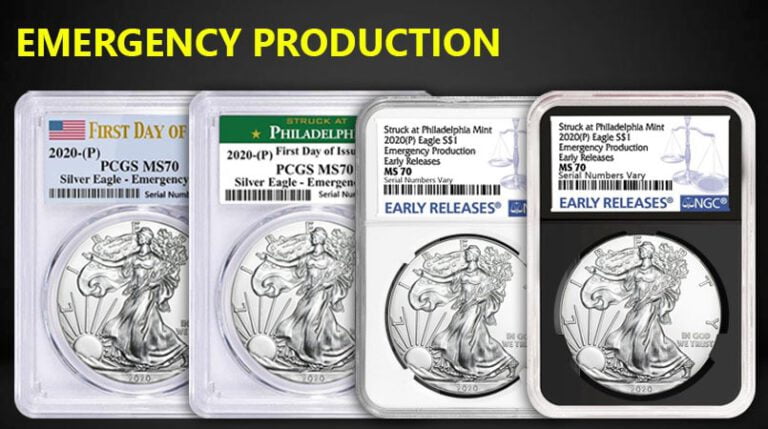 The coin of the year for 2020 is an unexpected one because of the coronavirus. To ensure the safety of its workers and customers, the US Mint had to temporarily shut down its West Point and San Francisco facilities. The Philadelphia Mint has rarely struck American Silver Eagles in its 35-year history, but, this year, Philadelphia stepped in to meet gaps in the production of these coins. This time, these coins are minted as “Emergency Production.” This is an unprecedented event for this bullion coin and the US Mint, making these coins all that much more special and unparalleled.

The Quarantined US Mint

Since the start of the coronavirus pandemic, the US Mint temporarily froze operations at two of its minting facilities. The West Point facility, which normally mints the 2020 American Silver Eagles, closed in March because an employee tested positive for the virus. Therefore, the mint shut down for a few days to perform a deep cleaning of the facility.

Additionally, the San Francisco Mint also halted all production on March 18th, but later reopened on May 4th. Because of these shutdowns, the US Mint had to rearrange its coin releases schedule for this year. These closures further affected the American Gold Eagles and American Gold Buffalo coins, which were not minted during the shutdown of the West Point Mint. This also led them to utilize the Philadelphia Mint to strike a limited amount of the 2020 American Silver Eagle coins. 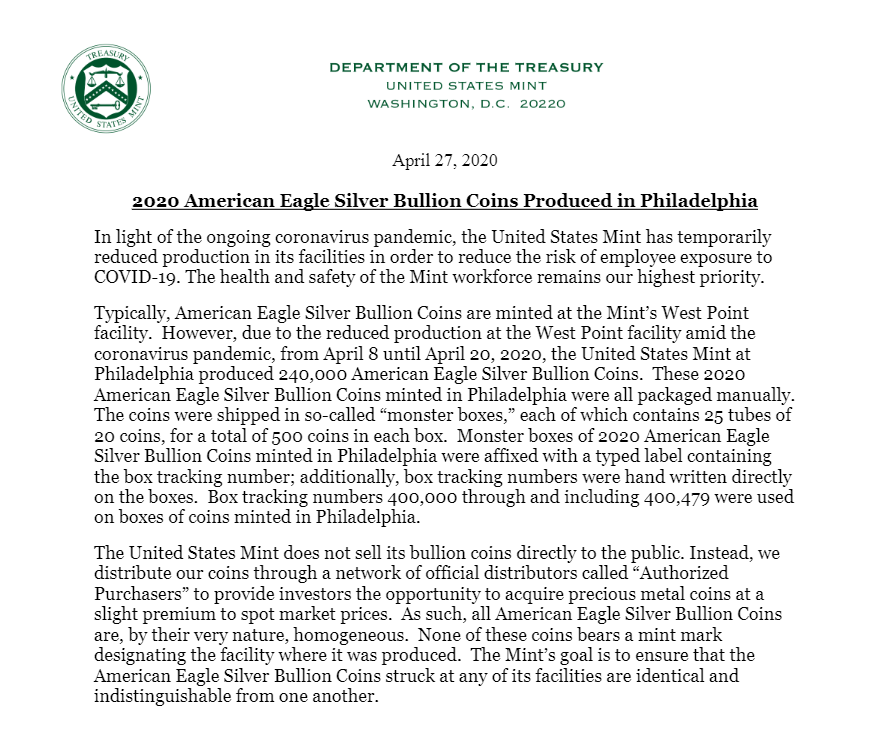 According to this official US Mint statement, the Philadelphia Mint struck an estimated 240,000 2020 Silver American Eagle coins. However, these particular silver eagles do not bear a special Philadelphia mintmark. The US Mint wanted the 2020 Silver Eagles to be homogenous in their design. However, the mint also packaged these coins manually in “monster boxes” that contained 25 tubes of 20 each. Then, the mint set these coins further apart with handwritten tracking numbers.

Significance Of The Philadelphia 2020 Silver Eagles

The production of Silver Eagles has shifted between minting facilities. Normally, production moved among the facilities to ease the burden of demand. However, the Philadelphia Mint has not had much to do with the American Silver Eagle coins except for more recently in 2015, 2016, 2017, and now again in 2020.

A Brief History of the Philadelphia 2020 Silver Eagles

Back in 2015, intense demand for the Silver American Eagles led the Philadelphia Mint to strike more Silver Eagles. This resulted in exceptionally rare Philadelphia Silver Eagles with a low mintage of just over 79,000. Some of these 2015 Silver Eagle coins sold for over $5000. Grading companies were able to only identify about 7% of these coins.

However, these coins are rarer than the mintage indicates. This information only became available in the early months of 2017 through the Freedom of Information Act (FOIA). So, dealers and collectors unwittingly opened many of the 2015-2017 Philadelphia monster boxes before they were graded. For NGC, PCGS, and other grading companies to properly identify these coins the boxes must be unopened. Otherwise, it's impossible for grading companies to distinguish between the Philadelphia Mint coins and other Silver Eagles after the seal is broken on one of these specially marked monster boxes.

The Philadelphia Mint’s 2020 Emergency Production Silver American Eagle is a poignant release because this is the first time—that we know of—the US Mint had to redelegate production from a complete shutdown due to health concerns. Thus, the US Mint struck its Philadelphia 2020 Emergency Production Silver Eagles coins. This commemorates a truly significant, historical moment for the coin series and US history. 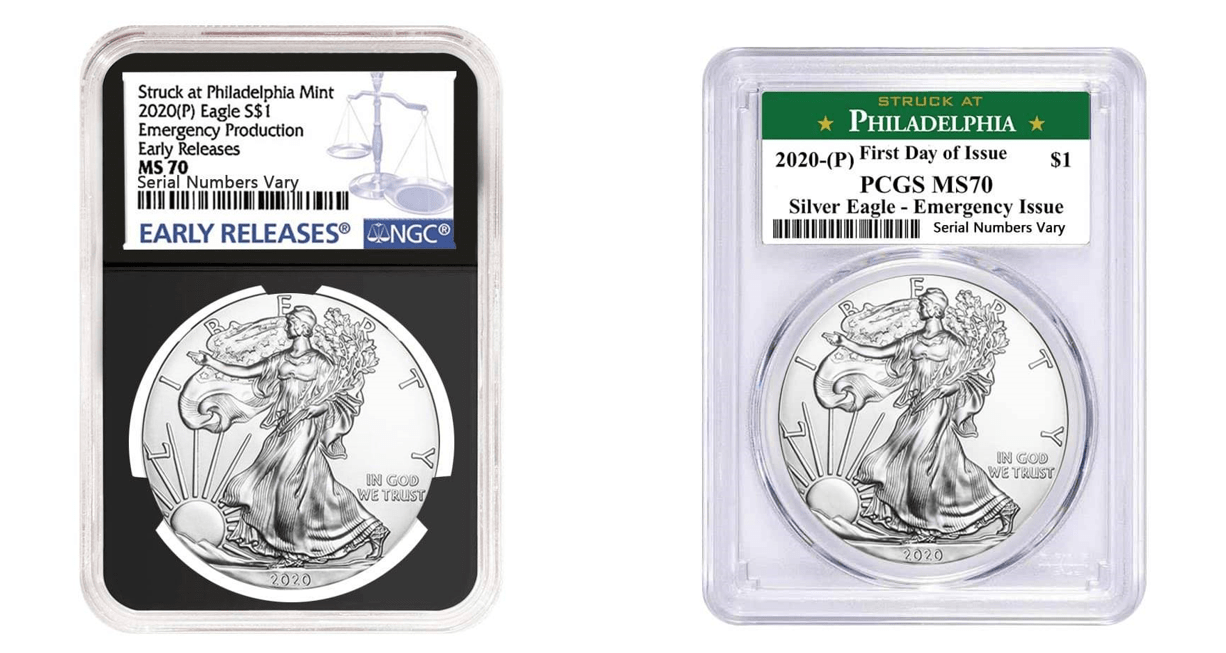 The 2020 Silver and Gold American Eagles resumed production at the West Point Mint on April 21st. This means the Philadelphia Emergency Production Silver Eagles are all that much rarer and more valuable for coin collections. So while these coins look the same as the other 2020 Silver Eagle bullion coins, these specific Philadelphia Emergency Production silver eagles commemorate a momentous event in global history.

Eric Gozenput founded Bullion Exchanges at the age of 27 and has been featured in places such as Fox Business News, Forbes, Reuters, Seeking Alpha, Value Walk. Eric maintains that precious metals are vital for investment portfolios and that investing in precious metals should be convenient, transparent, and secure. Before beginning his business in 2012, he began his career at Merrill Lynch as a Financial Advisor, then transitioned into working at a Hedge Fund as an International Trader for six years. Today, Bullion Exchanges has grown to become one of the largest precious metals dealers in the world that buys and sells physical precious metals and numismatic coins online and in-person at our location in the Diamond District of NYC.