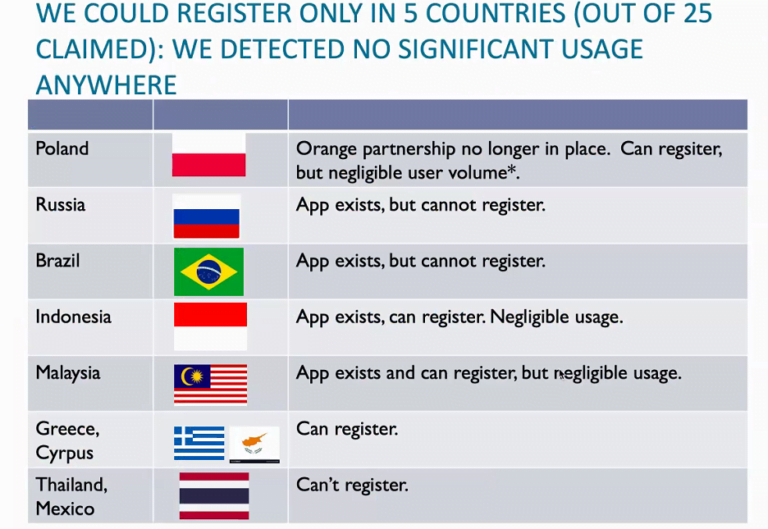 Gabriel Grego of Quintessential Capital presented his short thesis for music streaming company Akazoo SA (NASDAQ:SONG) at ValueWalk’s Contrarian Investor Virtual Conference today. He said the company looks like an accounting scheme because its users, subscribers, revenue and profit may be “profoundly overstated.”

Missed the event? Watch it here.

He argues that the company is a fraction of its claimed size and that it's losing money. He found that the service is available in only a handful of countries and is rarely used. He also suspects round-tripping between Akazoo and foreign shell companies and found that its infrastructure is collapsing with offices closing and employees leaving "in droves."

He also believes a number of key individuals associated with the company have ties with suspected frauds.

Shares are currently down 26.14% at the time of this article.

Grego said Akazoo was founded in 2000 by Panagiotis Dimitroupulous as a website design company and part of InternetQ. It held its initial public offering on the London AIM market in 2010. Then in 2015, InternetQ acquired R&R in a $17 million private placement provided by Tosca/Penta.

In 2016, U.K. blog shareprophets.com accused the company of being a suspected fraud. It was taken private shortly after and then relisted on the NASDAQ in late 2019 via a reverse merger. Grego believes Akazoo is living its "second and last life."

He shared a slide showing what he believes to be the dynamics of the scheme, which he believes includes some real transactions and a number of suspicious transactions. He believes the company may have been generating questionable revenue by trading with foreign shell companies. 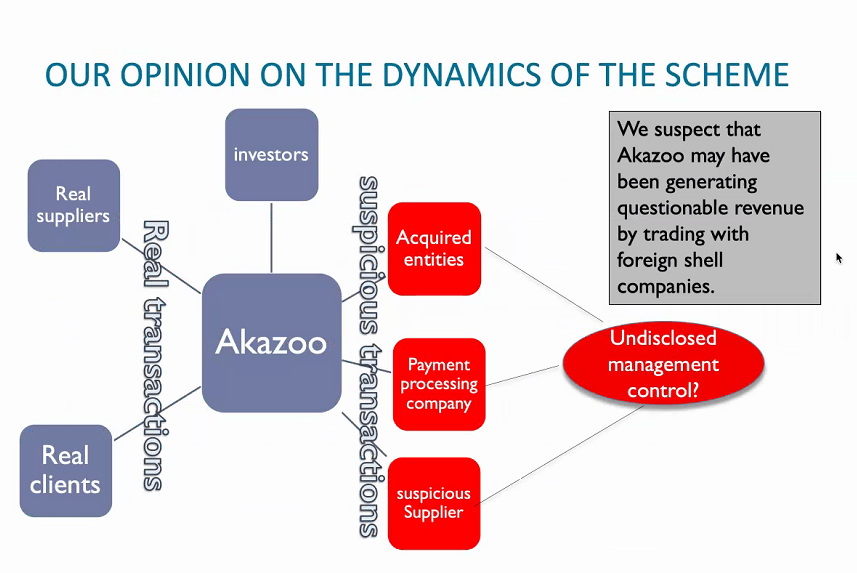 Grego believes Akazoo has burned almost $20 million in cash over four years even though it has claimed to have earned millions of dollars in profit. 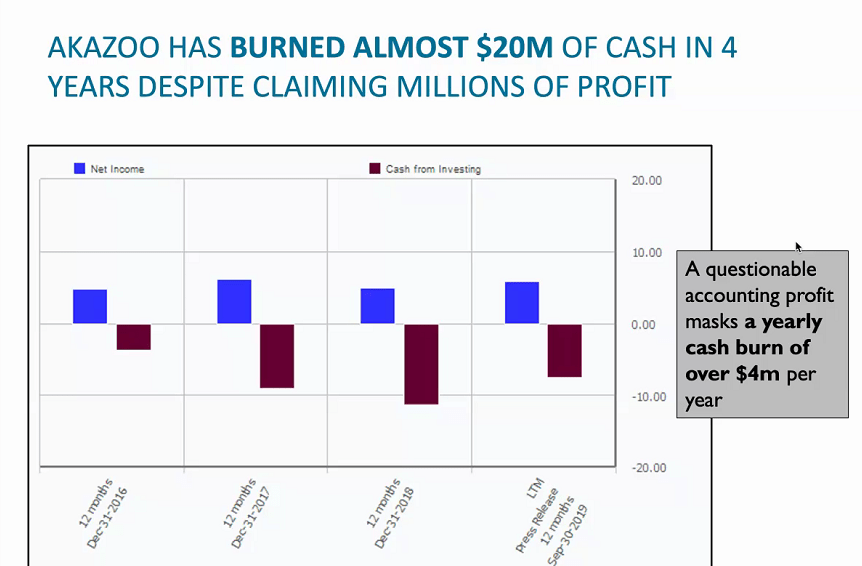 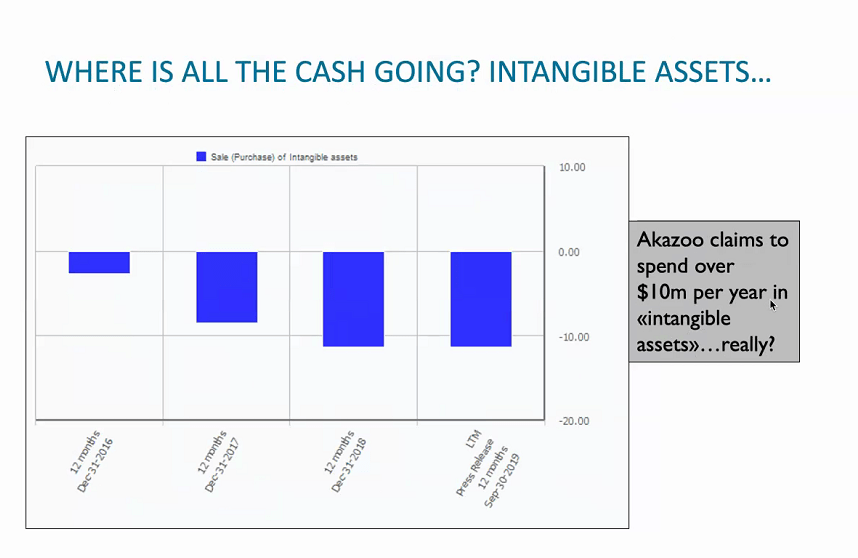 Compared to the company's peers, its days of sales outstanding is nearly five times larger than that of the average. This suggests its sales could be questionable. 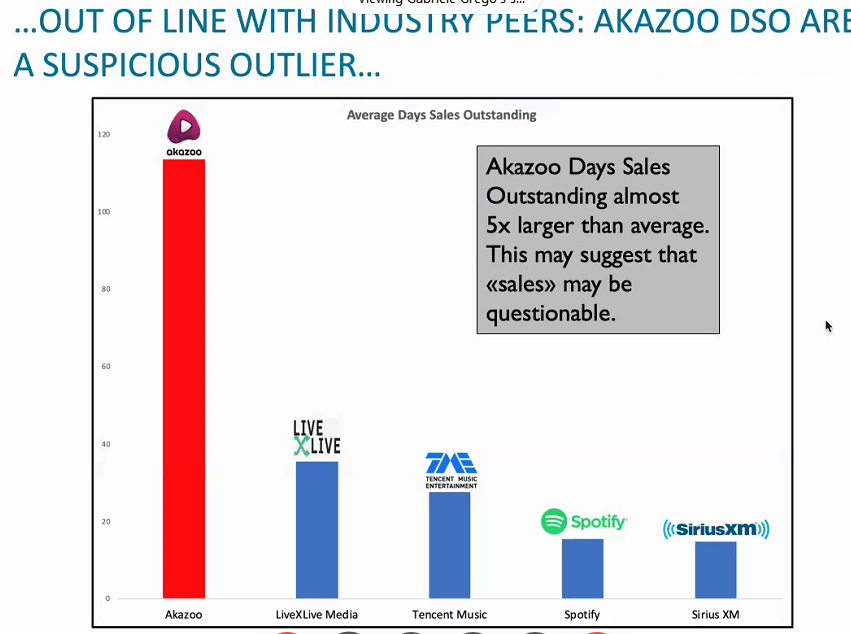 He also noted that Akazoo doesn't pay any taxes even though it supposedly earned $22 million in profit over the last four years. 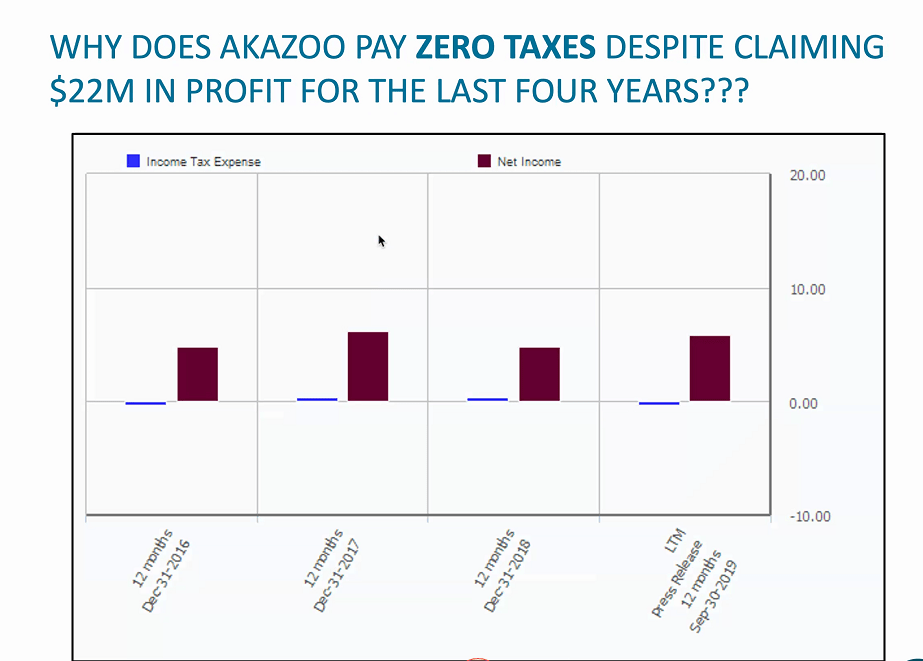 The company claims to have subscribers and revenue that are comparable to those of its competitors. Its valuation per subscriber is especially favorable compared to developing and emerging market players, which are similarly profitable, unlike most global players. 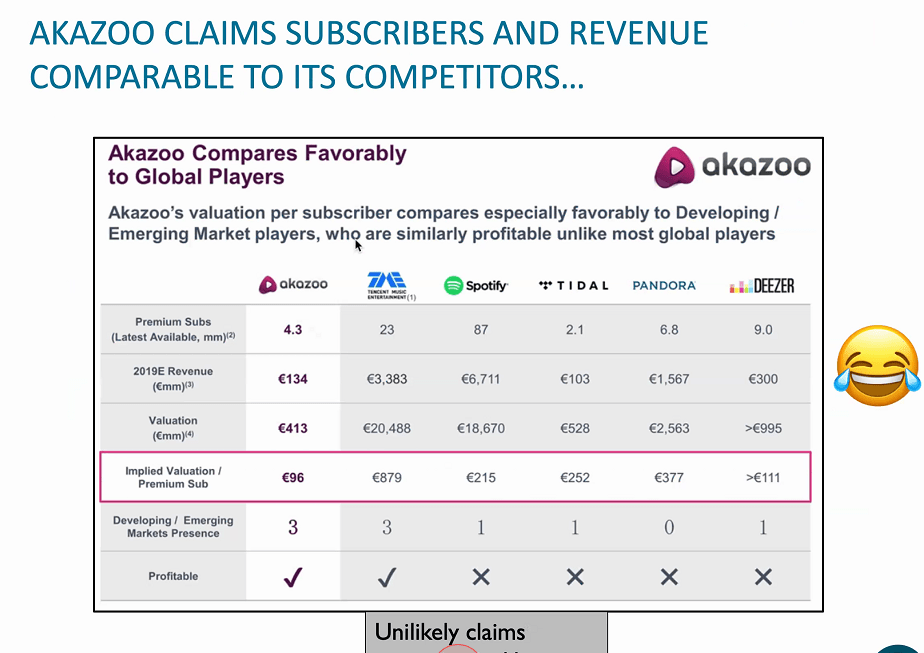 Grego also looked at the number of users per review, and Akazoo's ratio is 17 times higher than the average. On the Google App Store, the company's app has received a miniscule number of suspicious reviews relative to its claimed user base compared to its peers. 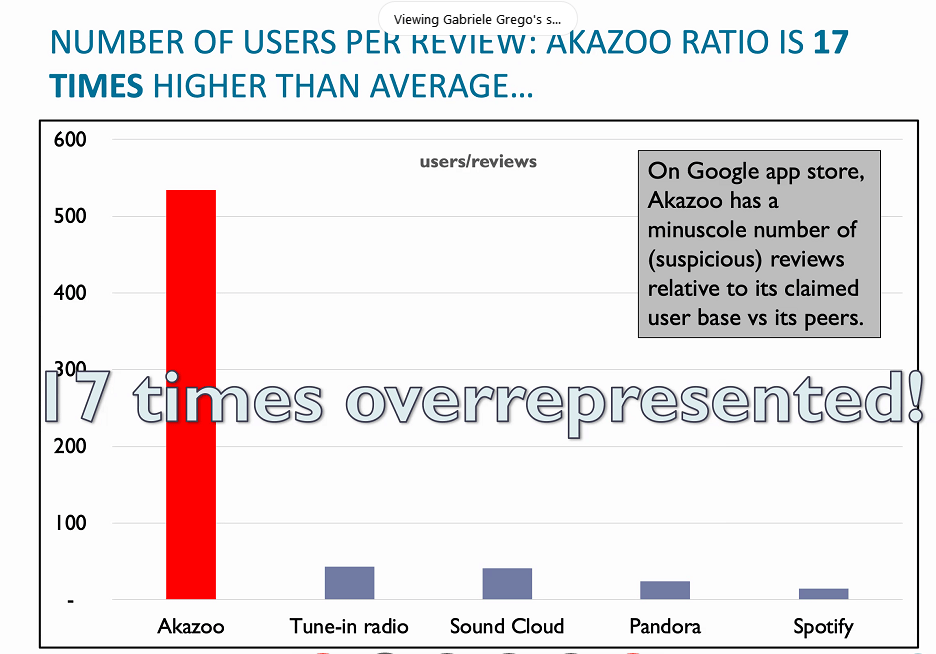 The company's revenue per employee is eight times higher than the average in its industry. It claims $145 million in revenue with just 26 employees. That amounts to $5.6 million per employee, which he believes is implausible. 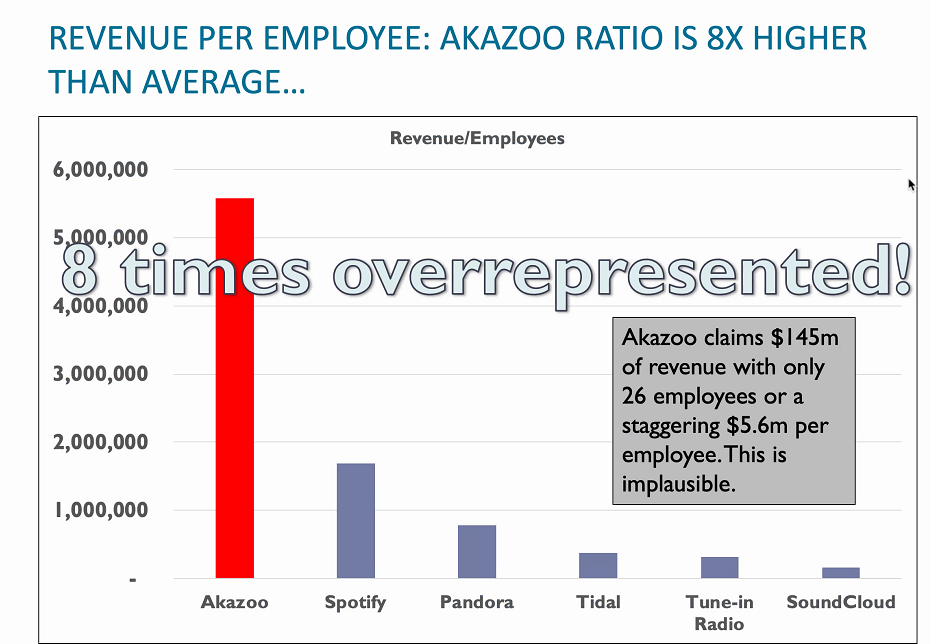 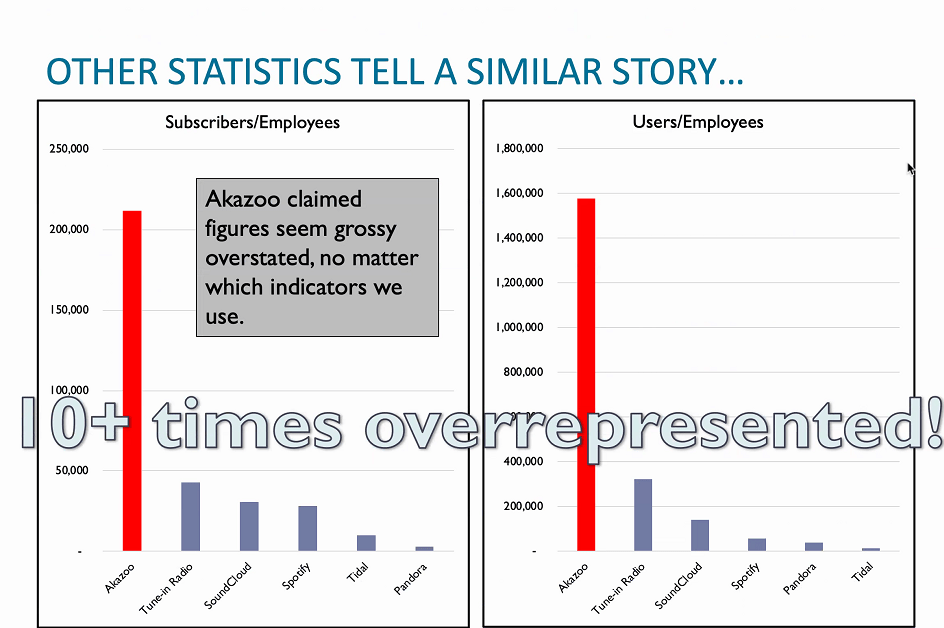 Looking at peer averages, Grego estimates that the company has less than 400,000 subscribers, compared to the 5.5 million it claims to have. 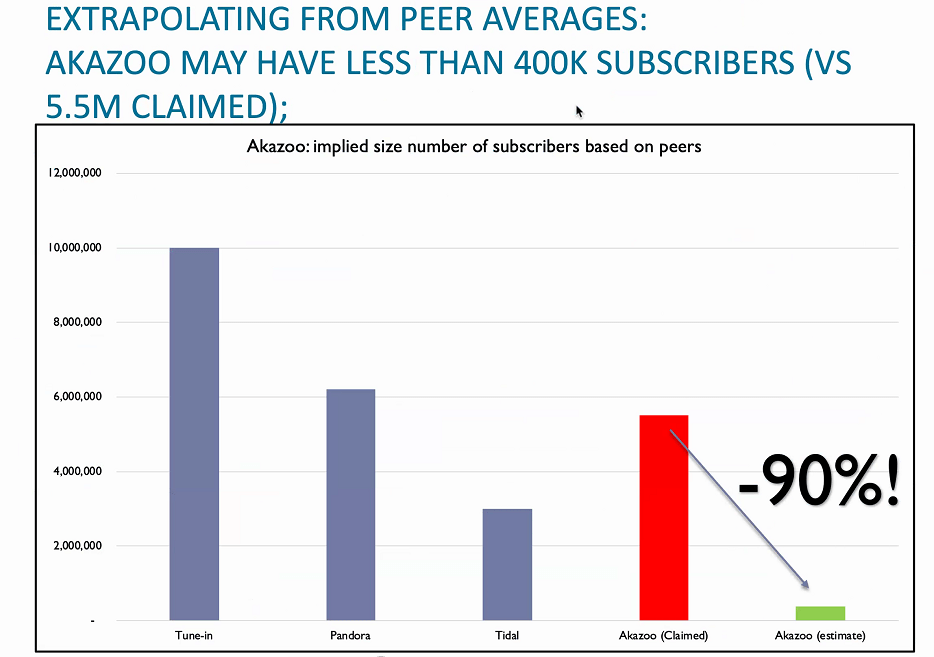 Based on Google Trends data, he said few people search for Akazoo anymore. Those that do are almost all in Greece and Cyprus, although the company claims to be oriented toward emerging markets. Google Trends data also indicates that the company is virtually undetectable compared to its peers like Deezer and Pandora, even though it supposedly has about the same number of subscribers.

Grego also noted that Akazoo's reviews are quite suspect. The top three reviews are from people who work at the company.

Further, he said the company's employees are disappearing rapidly. Between 2016 and 2018, the company's headcount was down 42%. He also said many of Akazoo's subsidiaries are located in non-transparent jurisdictions. 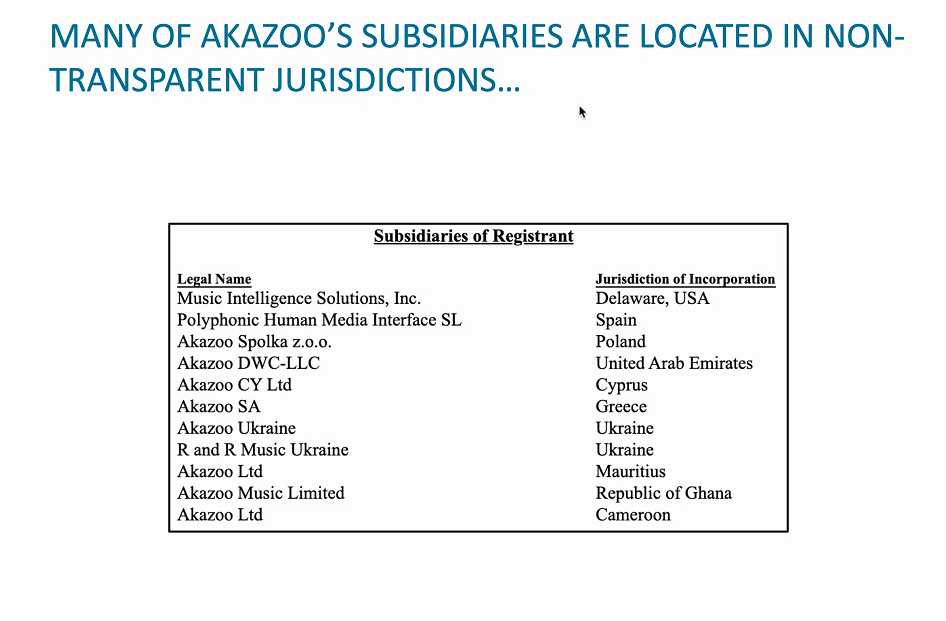 Supposedly, the company's main office is in London, according to its regulatory filings. However, he went to their address in London, and Akazoo has no presence there. The company had four employees at the location last year, but they aren't there anymore. Akazoo isn't even in its own headquarters.

He also visited another address listed on their regulatory documents. They are supposedly domiciled in Luxembourg, but when he went to the address, the company has no signs or presence there. He believes the address is where the company's lawyers are located.

He did find Akazoo in Athens, Greece at the address of InternetQ. However, there are no signs stating that the company is there. He did ask the doorperson, who said Akazoo was located there. He emphasized that while the company is trying to look like an international company, it's located just in Greece.

Further, he said the company's business in Ukraine is in the process of closing up. He cited the LinkedIn profile of Akazoo's chief accountant in Ukraine, who said its headquarters there is closing up shop.

Grego also called attention to the company's accounting firm, which is Crowe LLP. He said the accounting firm has experienced legal trouble of its own. The Securities and Exchange Commission found that Crowe's audit team found some major fraud risks in its audit of Corporate Resource Services in 2013.

However, it failed to identify and audit Akazoo's related-party transactions. They also failed to obtain enough audit evidence to respond to those risks and support recognition of revenue. The firm also failed to evaluate substantial doubt about the company's ability to continue as a going concern.

Grego also said Crowe was not independent due to an ongoing direct business relationship with its client. And it was aware of the high-risk nature of the engagement and the inability to obtain appropriate evidence.

The accounting firm was fined $1.5 million to settle the charge. Grego believes the charges brought by the SEC look similar to the issues he believes are happening at Akazoo. He finds it suspicious that the company is using such an audit firm.

Where does Akazoo really operate?

He also looked at the countries in which Akazoo supposedly operates. In its SEC filings, it claims to operate in 25 countries and said it could plan to expand into other countries. Most of its revenue supposedly comes from Poland, Russia, Malaysia, Thailand, Indonesia, Ecuador, Brazil and Mexico.

However, Grego's firm tried to open an account with Akazoo in dozens of counties. They were able to open one using a VPN in Poland, Malaysia, Indonesia, Greece and Cyprus.

For the other countries the company claims to be in, they received this message: "We would really like to be here. For now, our service is not available in your country. Please check back, you never know."

They were only able to register in five countries out of the 25 it claimed to be in. They detected no significant usage outside. 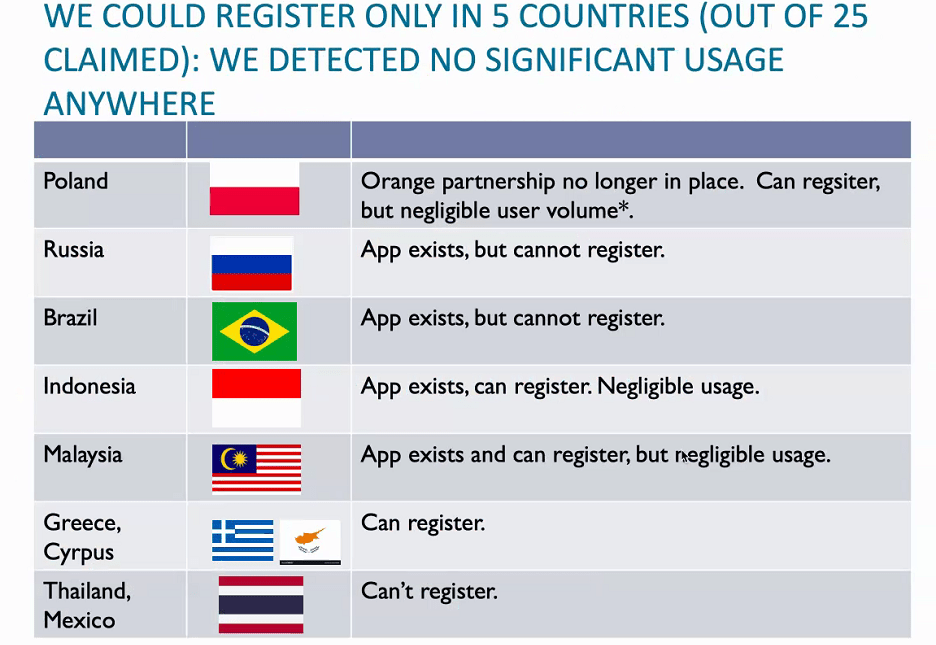 They also looked at music distributors. Sony said the company has purchased distribution rights for only Greece, Cyprus, Poland, Ghana and Malaysia. That likely means that either Akazoo is lying about its geographic reach or breaching music copyrights.

Grego also said a number of the company's employees and managers were formerly employed at Globo Plc, an alleged fraud exposed by Quintessential, and at Velti, another suspected fraud.

He said if their allegations are correct, the company's financials may prove false. Grego believes it has made serious misrepresentations on its SEC filings. He argues that the company "may be simply a gross exercise of deception to investors" and that its equity will be worthless. Thus, his price target is $0.